At the beginning of the new Netflix documentary Tiger King: Murder, Mayhem and Madness, a strip club proprietor tells the camera, “The big cat people are backstabbing pieces of shit.” The statement sounds both like nonsense and hyperbole. By the end of the seven-part series, it turns out to have been a vast understatement.

Tiger King, which began streaming on March 20th, unfolds like a wild-eyed hybrid of the popular S-Town podcast and HBO’s The Jinx, and follows a protracted feud between two eccentric big-cat owners that nearly ended in murder. Riveting, twisted, and occasionally disturbing, the documentary has become our terribly strange distraction from these strangely terrible times. Each episode is an invitation: Come for the majestic animals, but stay for the meth addicts, cult leaders, and the mystery of the missing millionaire.

'Tiger King': Why Joe Exotic's Country Songs Are Just Right for the Times

The Man Who Made Animal Friends

Filmmakers Eric Goode and Rebecca Chaiklin stumbled onto the story of Joe Exotic, the so-called tiger king, six years ago, in 2014. By the time they met the gay, gun-brandishing, self-proclaimed “redneck” with the bleached blonde mullet and an eyebrow ring that appears perilously close to being evicted from his face, the mayhem of the series’ subtitle was already well underway.

“We started in the world I knew best, which was underground reptile smuggling in South Florida,” explains Goode, a former nightclub owner/Madonna cohort, who is also the founder of the Turtle Conservatory. “We were looking at the pathology of people that engaged in these subcultures, whether it’s reptiles or bird people or primate people. What fascinated Rebecca and I was the Best in Show aspect, where the people are almost more interesting than the exotic animals they’re keeping.”

For the past few decades, the larger-than-life Joe Exotic (née Schreibvogel) bred endangered wildlife — primarily tigers — and charged customers to interact with cubs at his G.W. Zoo in Wynnewood, Oklahoma. He’s gregarious, if erratic, and claims that one cub can fetch an estimated $100,000 from customers eager for cuddles and photo ops. But after 16 weeks, the furry attraction ages out of the gig and eventually becomes a 400-pound pet with a costly appetite. At one point, Exotic had 227 tigers on his property.

Enter Carole Baskin, the outspoken founder and CEO of Big Cat Rescue in Tampa, Florida, a sanctuary for animals that have been bred for captivity but have outgrown their usefulness or are otherwise unmanageable. In the first episode, Goode and Chaiklin marvel at their luck in terms of how willingly these colorful characters play their part. “Oh, she’s dressed perfectly,” whispers Goode as Baskin saunters over to greet him donning a flower crown and decked out in head-to-toe tiger print. Over the years, she has deployed her sizable social media following to try to run breeders like Exotic out of business while, at the same time, opening her Big Cat Rescue to the public for tours and events at a price. “We are fixing the problem, they are creating the problem,” Baskin clarifies in the series’ first installment. 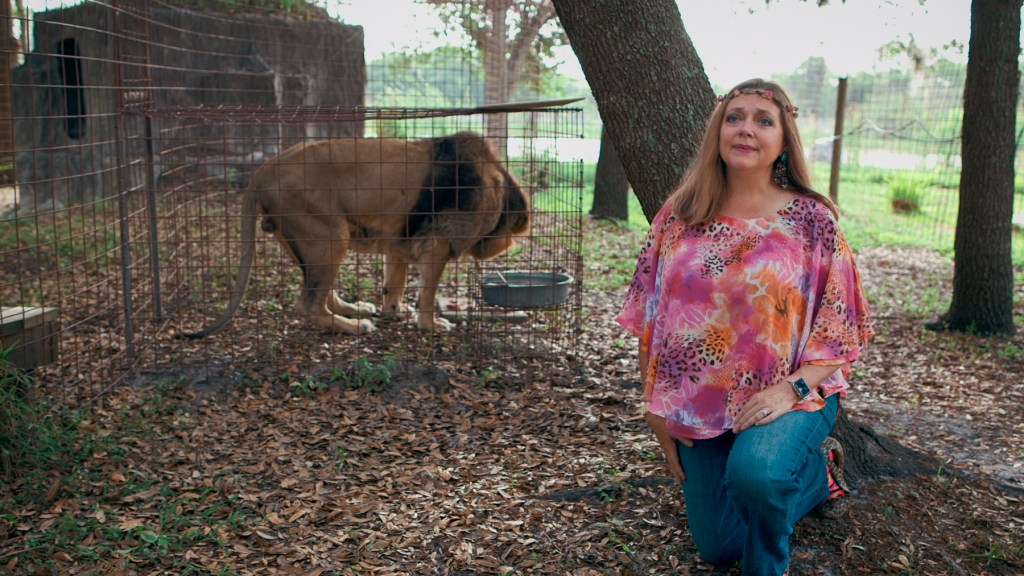 Carole Baskin, in a scene from Netflix’s ‘Tiger King.’

“Carole and Joe were easy,” says Chaiklin, of her main subjects. “Carole obviously has this very pointed mission, so she was an open book. And Joe has this insatiable hunger to be a star, so he was over the moon every time we were with him.”

In fact, the directors benefitted enormously from their primary subject’s penchant for documentation, much like Werner Herzog did with 2005’s Grizzly Man, about the life and death of Timothy Treadwell. Exotic was filmed constantly by various boyfriends and employees — a collection of drifters and ex-cons — for his nightly web series, which he largely used as a platform to harass and physically threaten Baskin. His footage constitutes some of Tiger King‘s most jaw-dropping moments. When a zoo employee, who identifies as a trans man and goes by the name Saff, gets his lower arm ripped off by a tiger, Exotic’s cameras capture him lying in a pool of blood, and then follow the host to the gift shop where he informs the tourists and laments possible financial ruin.

“That moment is so bonkers,” says Chaiklin. Saff opts to partially amputate his arm, and returns to work seven days later to offset any negative publicity, which is our first glimpse into the unexpected power that the exotic-animal subculture can have over the people who work within it. “It’s the ultimate in terms of somebody having completely lost their ability to navigate life in a way where they stick up for their own best interest,” says Chaiklin. Adds Goode: “Saff puts on a very stoic front, because all of the people that work in these places know that if there’s an accident, do everything you can not to report it.”

“What fascinated [us] was the Best in Show aspect, where the people are more interesting than the exotic animals they’re keeping.”—codirector Eric Goode

Chaiklin credits Goode with finessing candid interviews from some of the more wary members of the big cat community. (Goode says he and his co-director never got in a cage with “the dangerous animals,” as so many people onscreen do.) While Chaiklin edited hours of footage in New York, he spent time on location talking to people like Bhagavan “Doc” Antle, director of South Carolina’s Myrtle Beach Safari — a self-styled guru with multiple wives who rechristens the young women that work for him with exotic names and allegedly forces them to dress provocatively. And Mario Tabraue of the Z.W.F. Zoo in West Palm Beach, Florida, an ex-con who once used snakes to smuggle cocaine and casually admits to having been present when the body of an informant was sawed to pieces and burned. And Jeff Lowe, a polyamorous businessman who eventually takes over the G.W. Zoo from Exotic and drops tasteless gems like “a little pussy gets you a lot of pussy.”

“Eric was super fluent in their language and their world and so we had this incredible access,” says Chaiklin. “He was able to gain their trust and get us into places that PETA had been trying to get into for 10 years.” Most of the properties feature signage with guns that warn “We don’t call 911.” “Many of these places never really showed us fully their entire operations,” Goode says. “We would go to Doc Antle’s, but we were never allowed in the area where the animals are caged and kept. There’s a lot of smoke and mirrors.”

He adds that people who are driven to possess big cats, however, also tend to crave attention. “It’s the status, like having a Hummer or a Ferrari,” he says. “You have your tiger, there’s something very macho about it. Like, look at me, I’m special. There’s a whole other sector of people called monkey moms, and these are usually women that treat monkeys as surrogate children, which is a different, bizarre pathology.”

The documentary delivers some decidedly lurid twists. (Spoilers ahead.) Episode three delves into Baskin’s past, focusing on the unsolved disappearance of her wealthy philandering husband Don Lewis in 1997. Lewis’s family from a previous marriage believe Baskin killed him and fed his body to his tigers, an accusation she denies but which Exotic aggressively promoted on his web show and in the preposterous music video “Here Kitty Kitty,” starring a Baskin lookalike. The mystery lingers over the series.

“We did a lot of investigating, we talked to a lot of people, and we were not able to prove anything, and neither were law enforcement,” says Chaiklin. “Whether they did the best job investigating it — I would wager that maybe they made some mistakes along the way. We leave it to the audience.”

The animosity between Baskin and Exotic intensified in 2011, after she successfully sued him for trademark infringement, effectively bankrupting him. In 2017, after years of increasingly vivid threats, which included shooting a Baskin mannequin on his web series, Exotic hired Lowe’s pal Allen Glover to kill her. (Glover claims he was “scatterbrained,” took the money, and partied instead.) Despite their ongoing reporting throughout this period, Goode and Chaiklin say they only became aware of the murder plot afterwards.

“Bizarrely enough, we were at Joe’s filming when Allen was setting off to kill Carole…and we were completely oblivious,” says Chaiklin. “It was about six or seven months later when Eric had gone back and he got wind that Joe had suddenly left and we were trying to figure out why. He spoke to Jeff Lowe and heard that Joe was in serious trouble.” Goode adds that Exotic was by then under the scrutiny of authorities for a variety of reasons, including allegations that he had killed several of his tigers, which he later confessed to. “We knew, just as we know today, that all of these places were being looked at very hard by the feds,” says Goode. “Joe was at odds with the USDA [United States Department of Agriculture] and had been very threatening.”

In January, Exotic, who also goes by Joe Maldonado-Passage (the surnames of his husbands), was sentenced to 22 years in prison for the animal crimes and attempted murder-for-hire. He hasn’t been able to watch Tiger King, but some of the other participants, including Baskin and Antle, have already voiced their disappointment. “I’ve been in touch with everybody, and it’s fascinating to see the reactions” says Goode. “Some like the way they’re portrayed. Some don’t.” (Exotic, meanwhile, has filed a $94 million lawsuit against his former business partner Lowe and the U.S. government for damages incurred by his imprisonment.)

In the week since its release, Tiger King has become a phenomenon, inspiring Reddit threads, Twitter memes, and speculative casting for the upcoming TV adaptation (Kate McKinnon is already attached to play Carole Baskin). With so many people in quarantine right now, we are quite literally a captive audience who are more than willing to believe that truth is stranger than fiction. But chances are Tiger King would have been catnip for us anyway, for the same reason it compelled one of its directors. “I knew nothing about this world coming into it,” says Chaiklin, “and it blew my mind away.”