“We called it ‘smack fu,'” Mike Colter says, before breaking into a wide grin. The smile on the face of the Luke Cage star is startling enough, given that the superhero at the center of the latest Marvel/Netflix collaboration spends most of the show’s 13 episodes with a somber look on his face since, carrying the world on your ballistics-impervious broad shoulders is serious work. Listening to him discuss his character’s brute-strength combat style while nimbly digging through a bowl of sugar cubes for his coffee only adds to the oddness.

“We wanted it to be messy. It’s street-fighting, but you know, amped up a bit. Well, amped up a lot. He’s not trying to kill anyone, just … neutralize them.” He goes into a mock play-by-play: “‘OK, you: I’m going to toss you into that wall. You over there, I’ll just pick you up and throw you into the ceiling. And then you – well, you, I’ll just smack down to the ground.'”

Colter finally finds what he’s looking for, a few brown sugar nuggets buried beneath a host of white squares. He drops them into his almond-milk cappuccino, starts stirring  and the smile disappears. “The key, though, is restraint. Because if Luke wanted, he could just rip their heads right off.”

Restraint is not a word you usually associate with superhero stories, even by the more modest standards of Netflix’s gritty, shadowy small-screen takes on the comic company/media behemoth’s urban do-gooders. But as anyone who spent the weekend binging on showrunner Cheo Hodari Coker’s dynamic take on the Harlem-based crusader will tell you, Luke Cage is not your typical comic book series by a Lenox Avenue mile. Introduced as a supporting character in the second entry of the streaming services “Defenders” sub-franchise Jessica Jones, Colter’s charismatic strong man served as the moral support and room-wrecking sexual partner of the show’s titular conflicted heroine. Now given the spotlight, Cage is at the center of the least culturally whitewashed take on the genre to date. Lots of superhero tales might put a Notorious BIG portrait in a bad guy’s headquarters as a stylistic flourish. Very, very few would also include a swearing jar in a barbershop, discussions over the literary merits of Chester Himes and Walter Mosley, and episodes named after Gang Starr tracks. For fans of both the 1970s Power Man and his revamped 1990s version, it’s like Sweet Christmas came early.

“We kept using the phrase ‘inclusively black,'” Coker says, calling from his office a week before the premiere. “From the showrunner to the cast to everything, there’s no way around the fact that this is a black show. ‘Well, I mean, it’s a story that’s not, um, specific in…’ No, man, it’s a black show! But just because you’re outside the culture doesn’t mean you can’t understand it, learn from it, enjoy it. You can agree with it or disagree it. Just don’t expect a theme-park version of the black experience.”

“The shot of Mike as bullets are bouncing off of him – I’m thinking I’m making a funky-ass riff on The Terminator. Everyone else … they’re thinking of a bulletproof Trayvon Martin.”
-Showrunner Cheo Hodari Coker

A former Rolling Stone contributor, hip-hop journalist (he was the last person to interview the Notorious BIG before the rap star’s murder), TV veteran and card-carrying comic book nerd, the 43-year-old writer-producer went in to a meeting with Marvel with a pop-polymath pitch – “Belly meets City of God as written by the staff of The Wire” – and walked out with the gig. The only thing that gave him pause, Coker claims, was the request that the character not start out as a hero for hire like his original incarnation in the comics. “The fanboy in me went ‘Uhhhh …'” he says. “When I was growing up reading the Cage stories, I remember that being one of the things that stood out about him: Oh, this guy wants to get paid for being a superhero! So how do we do the reluctant-crusader thing, and not make him seem too passive?

“I’m thinking about this all weekend after that first conversation,” Coker continues, “and I go to see that Antoine Fuqua–Denzel Washington movie The Equalizer. That sort of convinced me that yeah, you can do a slow-burn idea of a hero and make it work. The next thought was, OK, modern-day Harlem, where ‘no snitching’ is the law of the land – how would the presence of someone who’s literally bulletproof affect both law enforcement and bad guys making plans? How do you make this character fit in with the Nicky Barnes types? And how does that presence change the ecology of a neighborhood?”

While Coker was figuring out how to transpose Cage into an American Gangster-style crime drama, Colter was chatting with Jessica Jones producer Melissa Rosenberg about introducing the character into the Netflix corner of the MCU. (Having grown up in rural South Carolina, the actor claims he’d never heard of the character until he started auditioning.) Both men knew a Cage solo outing was going to happen; both were nervous that they’d signed up for something without knowing who they’d eventually be partnering with. “When I heard they’d got Mike, I thought, Oh, this is the best casting since Connery got Bond,” Coker says. The appreciation was mutual. The two started sketching out who this super-powered man was outside of the Jones narrative as the showrunner built a storyline around Cage returning to his old Uptown stomping grounds. Initially, Luke keeps his abilities under wraps, working as a dishwasher for club owner/criminal kingpin Cornell “Cottonmouth” Stokes (House of Cards‘ Mahershala Ali) and sweeping up at a barbershop run by beloved local fixture Pops (Frankie Faison). Circumstances, turf wars and a crooked politician force Cage to step up and defend the folks around him. Cue gunfire and those “smack fu” scenes. 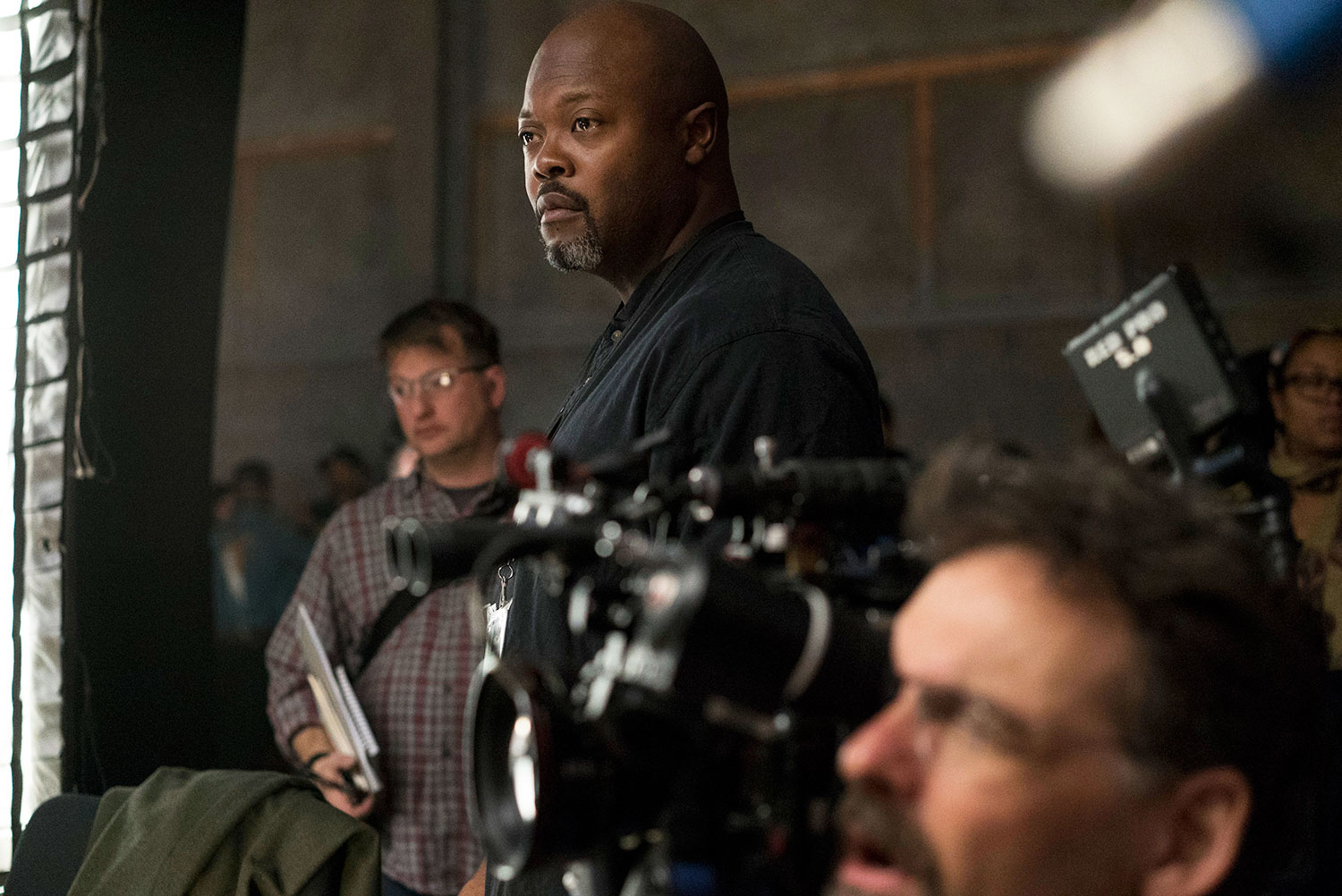 “I kept seeing this as a modern hip-hop Western,” Coker says. “The club is the saloon, Cottonmouth is the Gene Hackman character from Unforgiven, and Cage is the Man With No Name, trying to outrun his past. It all kind of fit.” The showrunner said there’s also a lot vintage blaxploitation movies of the early Seventies embedded in the show – he namechecks Black Caesar, Coffy and Shaft in quick succession – even though he knows the genre, and the term itself, still feels loaded in certain ways. “I’m not afraid of that label at all,” he admits. “When you understand what blaxploitation was, which was saying we want to give a black character the same kind of coverage and motifs as you know, Clint Eastwood or Lee Marvin, then it makes perfect sense. That Shaft theme is just Isaac Hayes trying to do his version of a Bond theme!”

The fact that Coker referred to the show as the “Wu-Tangification of the Marvel Universe” at this year’s San Diego Comic-Con suggested he was also drawing from old martial-arts epics – and judging from Luke Cage‘s first trailer, which featured Colter taking on bad guys to Ol’ Dirty Bastard’s “Shimmy Shimmy Ya,” the invocation of the wuxia-obsessed Staten Island crew clearly was not coincidental. When the showstopping sequence appears in the third episode, it’s actually scored to Wu-Tang’s “Bring Da Ruckus,” which somehow makes the scenes of Cage handing out beatdowns even more of a rush. “I wrote the scene with ‘The Mysteries of Chessboxing’ in mind, originally,” Coker says. “You know, ‘Ooh, raw, I’m-a give it to ya! Raw like cocaine straight from Bolivia!’ But it didn’t really pace like that. So my editor put on a cut of the scene, and said, ‘Okay, so … I changed the song, but just give it a listen first.’ And when I heard Ghostface’s first line come in synced exactly to Luke kicking down that door, I just lost my fucking mind!”

Still, it was another comment Coker made at SDCC, about the country being ready for a “bulletproof black man,” that caused the most chatter and raised expectations for the series in a completely different manner. Both the showrunner and the star knew that putting race front and center in a Marvel show would be a quietly revolutionary act; they also knew that releasing the series in an era where footage of African-American citizens being assaulted and shot by police is now seen with soul-crushing regularity would immediately politicize it as well. Even Cage’s choice of couture – specifically, a hoodie – feels like a reference to what’s happening outside of the show.

“It’s certainly not a coincidence,” Coker admits when the garment is mentioned. “You know that by doing this, you are saying: A black man in a hoodie is not just a hoodlum, as depicted by the media. He’s also a hero. But I think I was being a little naive, to be honest, because I hadn’t realized what sort of impact that imagery would have until that first trailer got that reaction. The shot of Mike walking down the hallway as bullets are bouncing off of him – I’m mostly thinking I’m making a funky-ass riff on that scene in The Terminator. Everyone else who’s watching it? They’re thinking of a bulletproof Trayvon Martin first and foremost. It wasn’t until we put things together that we realized how much this would resonate, especially since things have not gotten better. If anything, things have gotten much worse.”

“We didn’t have an agenda going in,” Colter says later, when asked about the scene. “Keep in mind that when we shot these episodes, the Black Lives Matter movement had not nearly reached the fever pitch that it’s at now. Personally, I didn’t want the show to be just a militant perspective; there’s nothing wrong with that, but it would not have fit this. We definitely wanted to acknowledge what was happening, however. You can’t be a black superhero show, in an urban setting, without being in touch with what folks are going through.”

While Coker admits he did hope to take advantage of the genre to explore deeper issues besides the notion that with great power comes great responsibility — to “use Luke Cage as a cultural Trojan horse in places,” he claims – what he ultimately want is to communicate the thrill of seeing someone up on screen who doesn’t conform to white-male hero template. “I remember taking my kids to the movies,” he says. “That one Captain America trailer comes on, the one where you first see Anthony Mackie playing the Falcon for the very first time. And the look on their faces when he jumps off of something and spreads his wings, and starts flying … you could just see the awe on their faces. I remember having a similar reaction when I saw Django Unchained, and you suddenly see Jamie Foxx get the whole mythical, low-angle hero shot. I remember thinking, ‘Man, when was the last time I saw a black man get that kind of screen treatment?’

“It’s important to for your kids to see themselves in their superheroes,” he adds. “Really, it’s important for all of us.”