As most couples will confess: Marriage changes everything. When Looking debuted two years ago on HBO, legal unions between people of the same sex were not the law of the land in the United States. That didn’t stop the show’s creator Michael Lannan and director Andrew Haigh (45 Years, Weekend), however, from kicking off their dramedy about three young men looking for love in San Francisco by having them attend the bachelor party of a couple preparing to tie the knot. Now, as the series officially came to an end with a 90-minute movie that featured two of its main characters being legally wed, you’re left thinking: Oh, how far we’ve come.

And we have TV shows to partially thank for it. When HBO launched Sex and the City in 1998, critics frothed about the way these ladies were depicted as cock-obsessed sociopaths, charging the show as too “gay.” That series upended culture, transformed how we viewed New York City pre-9/11 and allowed women to label themselves as a Carrie, Charlotte, Samantha or Miranda. After Lena Dunham’s Girls premiered in 2012, a similar firestorm ensued, with people once again engaging in a cultural battle of whether this show did or didn’t define a generation. Many gay men grew impatient – ready for our own version of a show that told our story. We were tired of having to relate to the girl falling in love with a guy, transposing our hopes and dreams on a body and life that was fundamentally different. But when Looking debuted in January of 2014 — and was immediately labeled the “gay Girls” — it was an expectation that handicapped the series from the beginning.

John Cho's Sulu Revealed as Gay in 'Star Trek Beyond'

Centered around Patrick (Jonathan Groff), a 29-year-old video game designer, and his college pal Augustín (Frankie Alvarez) and Dom (Murray Bartlett), a 40-year-old former hookup, this was not the same neurotic landscape of Hannah, Shoshanna, Marnie and Jessa. Patrick is looking for answers, and although he can babble on about banalities and has his own body issues, he’s not the sort of narcissist you want to slap out of his self-centered spell. Patrick meets Richie (Raúl Castillo), a Mexican-American barber, on the train and they begin an intense romance. Then our hero is seduced by his boss Kevin (Russell Tovey) and has to figure out what path he’ll choose. We were ready to spend some serious time with these characters as these relationships unfurled, but the show was canceled after its second season. It seemed their stories would remain incomplete. Thankfully, HBO granted a sort-of reprieve: One feature-length TV movie special to wrap things up. It was a blessing and a curse. Looking: The Movie does indeed give fans closure. It also gives us so many wonderful, gorgeous moments that it’s only going to make viewers want more.

In terms of context — and to remind you of pop culture’s short attention span lifetime — it’s been roughly a century since Showtime’s Queer as Folk titillated and shattered taboos when it premiered in 2000. Will & Grace, a groundbreaker in terms of gay representation in primetime TV, went off the air in 2006. Now, every series seems to have a gay character and teenage boys are free to kiss on network television; people appear OK with gay and lesbian engagements and wedding ceremonies, raising families and discussing transgender lives, if not the things that happen in the bedroom. Yet Looking, with its quiet, slow pace, accomplished something distinctive in its ability to show the range of male intimacy. Sure, there were some incredibly hot erotic moments — and the sex scenes felt political and essential. But we also saw men in platonic situations hugging and kissing, cuddling and crying. That’s something groundbreaking in its own right. And you don’t always get such profundity in 30-minute blocks. 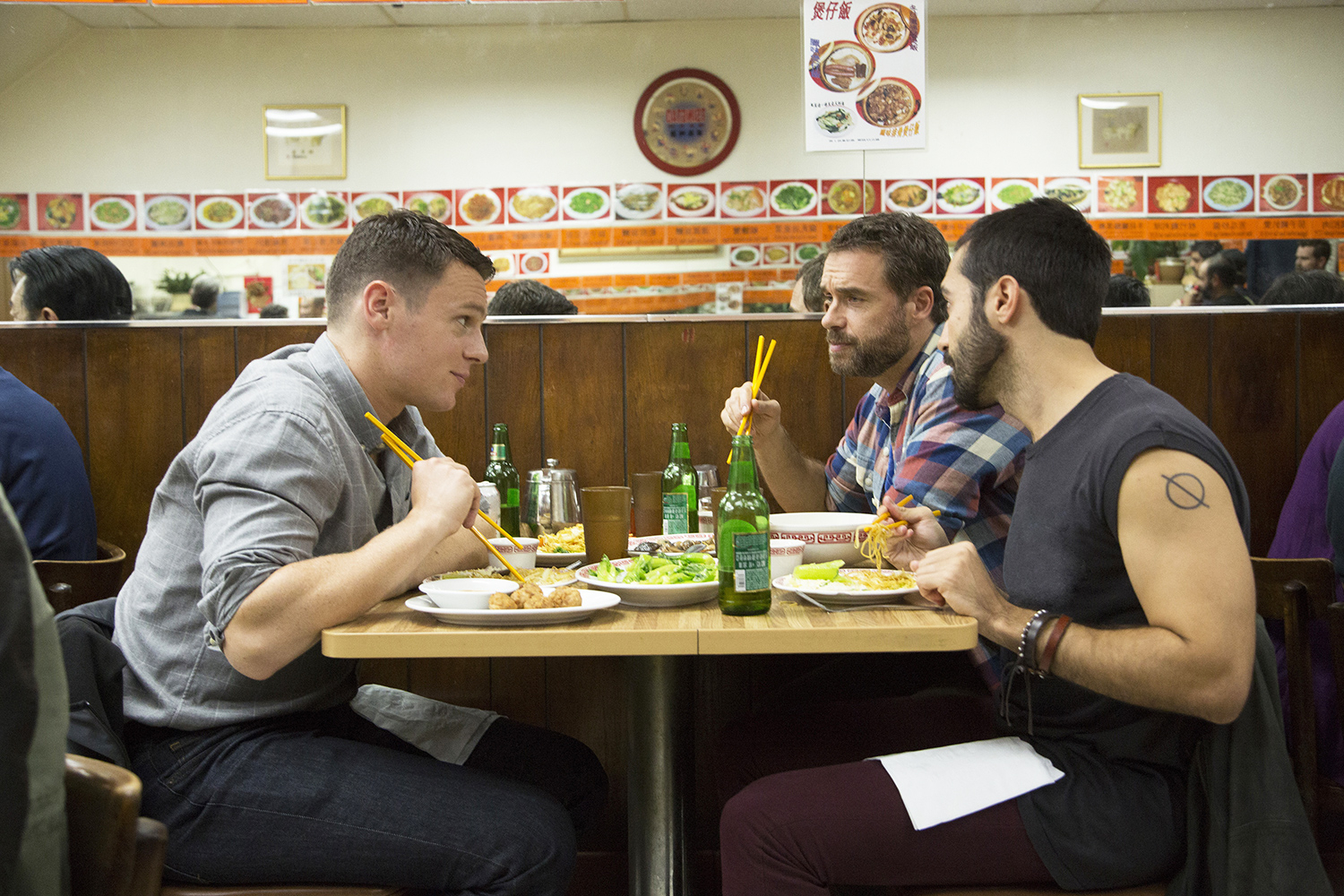 The movie picks up nearly a year after the end of Season Two, with Patrick returning to San Francisco after running away following his breakup with Kevin. He reunites with Augustín and Dom at a favorite Chinese restaurant and the trio cheers to the fact that they find “something close to adulthood.” Over the course of a long weekend, Patrick reconnects with the people he’s left behind, but he’s still looking for answers. In the first season, Patrick visited Richie’s fortuneteller, but he runs away before he asks her anything — too scared to know too much.

Now, in the movie, he finally poses his questions to an archetypal wise woman, the judge (played elegantly by Tyne Daly) who will be marrying Augustín and Eddie, asking if she can tell which relationships will stand the test of time. “Do you really think people can change for each other?” he asks her. “I prefer adapt to change,” she responds. “It’s a little more realistic.” It’s a lesson that Patrick has to chew on to see if he’s able to make it work for him, still deciding if he prefers Richie to Kevin.

Interactions with people from a totally different world was something more common for gay men since they would meet in bars and clubs or in clandestine spots — ignoring the class, race and age distinctions. Before the possibility of marriage, without the expectation of children and families, gay men were free to form ties that might seem implausible or impossible to those burdened with the attendant responsibilities that steer so many heterosexual relationships. Looking explored this transition, a generation on the cusp of something different. In some ways, the show functioned as an “It Gets Better” map, showing that there could be happy, fulfilling bonds formed between men of different backgrounds and generations.

It’s another reason the many wonderful club scenes in Looking take on a new meaning in the wake of the massacre at the Pulse nightclub in Orlando on June 12th that resulted in the death of 49 people, many of them LGBTQ. For decades, these have been the meeting spots, the safe spaces, where diverse groups could congregate while exploring their sexuality or just looking for some sense of community. In a final scene of the movie, after the City Hall ceremony, everyone gathers at a club to dance and celebrate under the disco balls and flashing lights. Patrick looks around, realizing that one day soon all of this — men marrying men, kids coming out without rejection — will seem like second-nature and be taken for granted. An ecstatic moment of communion, the club is transformed into a temple of love and generosity, reminding us how terrible our lives would be if we were to lose that or forget.

Ultimately, the send-off leaves things open-ended. Everyone is coupled up – for the short or longterm, we’re unsure – but it doesn’t feel quite complete. These men were never easy caricatures, and they will hopefully have full, long lives, forever in one another’s orbits. The fact is, the guys in Looking were always more beholden to The Golden Girls – with several episodes referencing the four older single women living together in Miami (with Patrick being the clear Rose of the bunch) – and it wouldn’t the impossible to imagine checking up on them decades from now, all shacking up in retirement, thankful for being friends.