How 'Looking for Alaska' Revives the Indie Soundtrack of 'The O.C.' - Rolling Stone
×
×

Few scripted series have had a bigger impact on how music is used on television — and on how the music business uses TV to help break new artists — than The O.C. Throughout the teen drama’s four-year run from 2003 to 2007, its indie rock-crazy creator, Josh Schwartz, and his music supervisor, Alexandra Patsavas, filled each episode with the hottest indie acts of the day. Young, lesser-known bands like the Killers and Death Cab for Cutie got a mainstream showcase that didn’t diminish their cool, and soon record labels were elbowing each other out of the way for a spot on the show’s soundtrack — or, even better, to have their acts play at The Bait Shop, a fictional rock club Schwartz had built for the second season to make it even easier to give his favorite artists a boost.

'Allen v. Farrow': What We Learned From First Three Episodes of Docuseries

Around the same time Schwartz and Patsavas were reinventing the sound of 21st century TV drama, he was also hard at work on a movie script adapting John Green’s 2005 debut YA novel, Looking for Alaska. Naturally, Schwartz filled the screenplay with nods to songs by many of the same artists he’d used so effectively on TV. It would be a very current film, with very current music.

After more than a decade of development hell, Schwartz and his O.C. partner Stephanie Savage have finally made Looking for Alaska. It is no longer a movie but a very good eight-episode Hulu miniseries, which tells the story of teenager Miles Halter (Charlie Plummer) attending a boarding school in Alabama and developing a painful crush on the enigmatic Alaska Young (Kristine Froseth) over the course of a memorable and often difficult year. And by keeping the story set in the time the book was originally published, Schwartz and Patsavas got to revisit their musical pasts, assembling a soundtrack that would make Seth Cohen(*) weep with gratitude with its use of songs by White Stripes, Rilo Kiley, Outkast, The Postal Service, The Strokes, LCD Soundsystem, Spoon, and many more heavy hitters from the 2005-06 indie music scene.

(*) The line between The O.C.‘s creator and its first breakout character is so blurry that at one point in the interview for this story, Patsavas unconsciously addressed Schwartz as “Seth.” (“Thanks, Marissa,” he replied.)

The retro soundtrack was a byproduct of Schwartz and Savage’s reluctance to move the narrative past the era when it was originally written. “A pay phone plays a pivotal role in the story,” Schwartz notes, “and it’s hard to imagine Alaska and all her thoughts sent as texts or Instagram stories.” But if assembling an O.C.-esque soundtrack wasn’t the primary goal, it was still a subject of great joy for Schwartz and Patsavas.

“There’s the music that defines you as a teenager, and that stays with you forever,” says Schwartz. “But second only to that is the music you love as a young adult. This was a very exciting time in my life and career, and the beginning of my relationship with Alex. This music was very important to me personally.”

“It was so great to be nostalgic,” says Patsavas, who mostly has to focus on contemporary songs in her role curating the soundtracks for Grey’s Anatomy, Riverdale, and many other current series. “This is all music that I know so well, and it is so fun to run through your own memories of what might work.”

Schwartz often writes songs into his scripts, hoping Patsavas will be able to secure the rights. Every draft he did of Looking for Alaska, going back to the feature film version in 2005, opened with “Crosses” by José González. Fifteen years later, the miniseries still begins with that song.

In a meta moment late in the story, The O.C. theme song (“California,” by Phantom Planet) can be heard when Miles and his girlfriend Lara (Sofia Vassilieva) are watching TV(*). But Schwartz and Patsavas decided early on to avoid using songs they had used on that show whenever possible, even if the artists were repeated. So while the Killers played “Mr. Brightside” at The Bait Shop, Alaska leaving home to return to school is accompanied by the band’s “All These Things That I’ve Done.” Still, they’d used so many songs from that year on The O.C. that some overlap was inevitable. Coldplay’s “Fix You” accompanied The O.C.‘s prom, for instance, and here plays under similar (albeit less tragic) circumstances. “That was us asking ourselves, ‘What is a song that would be playing at a school dance that year?'” Schwartz acknowledges.

(*) Schwartz debated whether to use that or the scene where Peter Gallagher says “yogalates,” before deciding “California” got the point across more efficiently.

Many of the artists in question are much bigger now than they were in 2005. But the early exposure they gained from being featured on The O.C. gave Patsavas a leg up in clearing their music this time around. “I think that they hopefully had some special affection for The O.C.,” she suggests, “and that helped us get all of these big artists.” 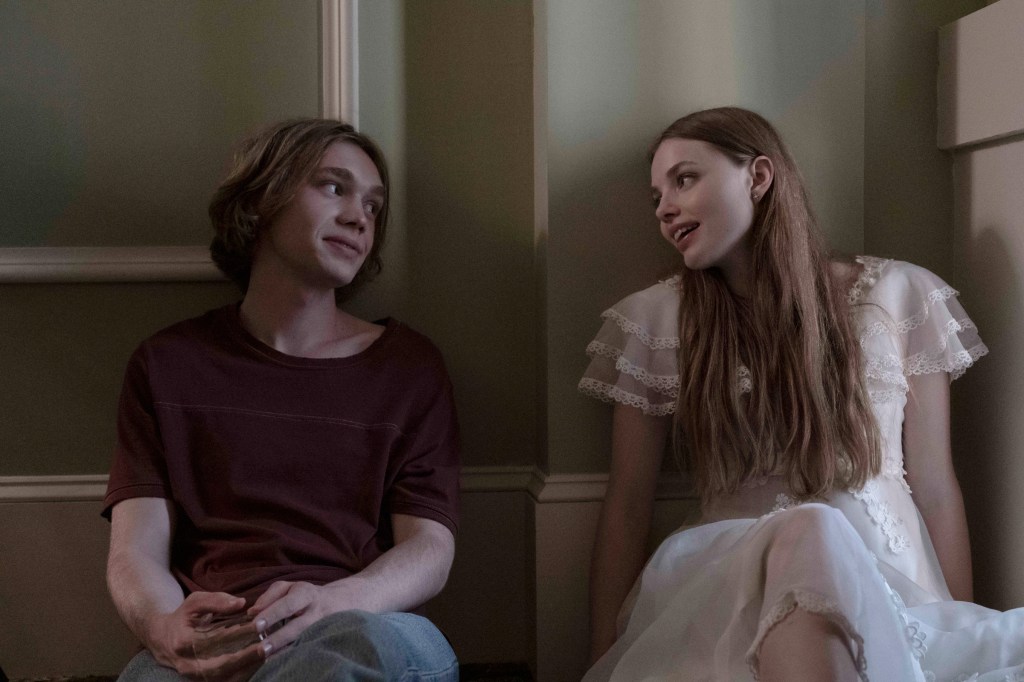 And some songs featured in Looking For Alaska are ones that you would mistakenly assume had appeared on The O.C., like Death Cab’s “I Will Follow You Into the Dark.”

“We really wanted to use that song on [The O.C.],” recalls Schwartz(*). “And at the time, it was just very personal to Ben [Gibbard] and the band, and they weren’t ready at that moment to license it and let it be out there as something separate from the album and their own experience. We were thrilled that they were happy to license it now.”

(*) Does he remember the moment he wanted to use it for? “I don’t, but it was probably something sad!”

The version of the song that appears in Looking for Alaska, over a crucial scene between Miles and Alaska, is performed by singer-songwriter Miya Folick. It’s one of several times throughout the miniseries where Schwartz and Patsavas swapped out the original for a cover, always by a female artist.

One of Schwartz and Savage’s focuses in adapting the book was making Alaska into more of a character in her own right, rather than just a mysterious object of obsession for Miles. “It was important to us to put Alaska more onscreen, and to help us get more inside Alaska’s head,” Schwartz explains. “So a lot of these songs were songs originally sung with a male vocal, that we had covered with a female vocalist to help illustrate how she was feeling.”

It was also a way to balance out the era they were tapping into and make the whole thing feel more contemporary. As Patsavas notes, “So much of the indie rock scene in 2004 to 2005 did have male vocals.” Some of the cover versions even gave Schwartz new insight into songs he thought he knew intimately, like Young Summer’s take on Franz Ferdinand’s “Take Me Out,” which plays here as Miles’ roommate the Colonel (Denny Love) talks about how angry he is.

“I never realized how sad that song was until I heard this version, and really understood it and felt the lyrics,” says Schwartz. (From the first verse: “And if you leave me here/You leave me broken, shattered I lie/I’m just a crosshair/I’m just a shot, then we can die.”) “In the original version, it feels like a fun, upbeat, rocking song.”

Along the way, Schwartz and Patsavas leaned on old collaborators for insight. Longtime O.C. editor Matthew Ramsey frequently suggested different places to try songs in Looking for Alaska, like pointing out that Kat Cunning’s cover of Alexi Murdoch’s “Orange Sky” would be best deployed at a funeral scene in the seventh episode. Their composer Siddhartha Khosla was in a band, Goldspot, that was once featured on The O.C. As someone who had been inside that particular music scene, he understood the feel Schwartz wanted for the score — “We talked about Sigur Rós a lot,” Schwartz says — in a way that would evoke those bands without mimicking them.

Schwartz has always been an evangelist for his musical taste — you don’t build a rock club set on your first TV show unless you really want your audience to get into Modest Mouse or The Walkmen — and the long delay in making Looking for Alaska has had an unexpected bonus for him.

“I would play the actors the songs,” he says, “and some of them were not alive when these songs were out. It was an opportunity for us to be nostalgic, but also to turn a whole new generation of listeners onto these songs that they might not otherwise know. That actually felt really fun. We can now be scholars of the Aughts, which is a title we’ve long aspired to.”

All eight episodes of Looking for Alaska are available now on Hulu.