When Lou Adler, producer of the original Rocky Horror Picture Show, began work on a TV remake of the film, he wasn’t quite sure what would fly on a major TV network. Neither were fans of the 1975 original, some of whom wrote him to say they were worried the whole thing would be ruined by censorship. This was one of the most beloved cult movies of all time, one which featured Susan Sarandon and Barry Bostwick prancing around in their underwear and sleeping with its murderous protagonist Dr. Frank-N-Furter, a self-professed “sweet transvestite from transsexual Transylvania” and his Manson Family–esque followers. How do you keep that essential subversiveness and still make it work in primetime?

Ultimately, Adler says, they made only one concession: “We took ‘fuck’ out of ‘mindfuck,'” he says, referring to the song “Planet Schmanet Janet.” “Everything else is in there. … The original has been on television, so every time somebody from censors called me, I said, ‘Wait, that’s already been on.’ Obviously, the times are a-changing, but it’s still surprising that they are running this without any censorship other than that one word.”

Director Kenny Ortega, best known for the High School Musical movies, made the new film – which has been retitled The Rocky Horror Picture Show: Let’s Do the Time Warp Again and will premiere on Fox this Thursday, October 20th – using the same script as the original. It’s anything but a nostalgia piece, however: Rather than cast an obvious cis-gender star, Orange Is the New Black actress and transgender-rights activist Laverne Cox was recruited to play Frank-N-Furter; a neon, rainbow-adorned look replaces the original’s schlocky-looking setting (Cox calls it “opulent”); and there’s footage of a movie-theater audience carrying out all the rituals that made seeing the movie a rite of passage, like whipping out newspapers when it rains and throwing toilet paper when Brad proclaims “Great Scott.” It’s both an homage and a variation on the original’s kitschy interactive appeal.

Last year, Adler, who had entertained the idea of making a Rocky Horror TV movie for the past decade or so, said he only wanted to do one if he were happy with the casting. “We’re not casting an original script; in a way, we’re casting ‘Tim Curry,'” he told Rolling Stone. “So if somebody is compared to Tim, they’re going to lose.” Things changed quickly when, he says now, “along came Laverne Cox.” As soon as he saw a screen test he says there was no plan B.

“She can sing and dance as good as anyone I’ve ever seen,” Adler says. “The fact that she was transgender was a plus to us. It gave something to this Rocky Horror that was below the surface – and that should be above the surface. We were sold. But even if she weren’t [transgender]. we would have still gone with Laverne for her musical talent.”

It was a role that Cox, despite having never attended a midnight screening of the flick, had longed to play. “When I discovered the original movie as a college student, it just spoke to me,” she says. “The song, ‘Don’t Dream It, Be It,’ became a personal mantra, and then all the music and just the campiness of it all. I learned every word of dialogue to the movie. It just really spoke to me in a deep and profound way. … It’s a dream part to get to play someone who’s so devious and sexy and seductive and murderous.” Cox lets out a high-pitched laugh. “Who wouldn’t want to be Dr. Frank-N-Furter?”

To get ready for the role, she took voice lessons from two different teachers (she has a four-octave range) and studied with an award-winning choreographer. “God, that was so hard and painful,” she says. “I did everything I could to prepare. I like to over-prepare.”

But one thing she could prep for only so much was the reaction Rocky Horror fans had to her casting. “What Tim did as Frank-N-Furter is iconic and it’s one of the great film roles,” she says with a laugh. “It’s straight-up intimidating. Throughout my career, I’ve often said to myself: ‘I’m black, I’m transgender, I’m a woman. I have to be twice as good or four times as good as everybody else.’ And it’s not really a sustainable to live that way. But I worked really hard.” (Incidentally, she has also pondered what being transgender means to playing this role and singing “Sweet Transvestite”; its use here is appropriate, she has said, because of the “specific moment in history” when it was written.)

It also helped that she got the blessing of the original Frank-N-Furter: Tim Curry, who appears in the remake as the criminologist and narrator. It’s the actor’s first on-screen role since 2010; he suffered a major stroke in 2013.

“Just meeting him was like an out-of-body experience,” she says. “Then I sang in front of him and he was just so sweet. He said, ‘Brava’ after I sang ‘I’m Going Home.’ I didn’t sleep that night. I just lied in bed like, ‘Oh, my God, this is happening.’ Later, I would ask him his thoughts on the dramatic beat of a scene. It was pretty cool.”

“Tim Curry came aboard and validated the show,” Adler says. “He wanted so much to be not only a part of Rocky Horror but part of a musical cast and part of something that was filming. It brought back a lot of things that he hasn’t been doing over the last four or five years.” 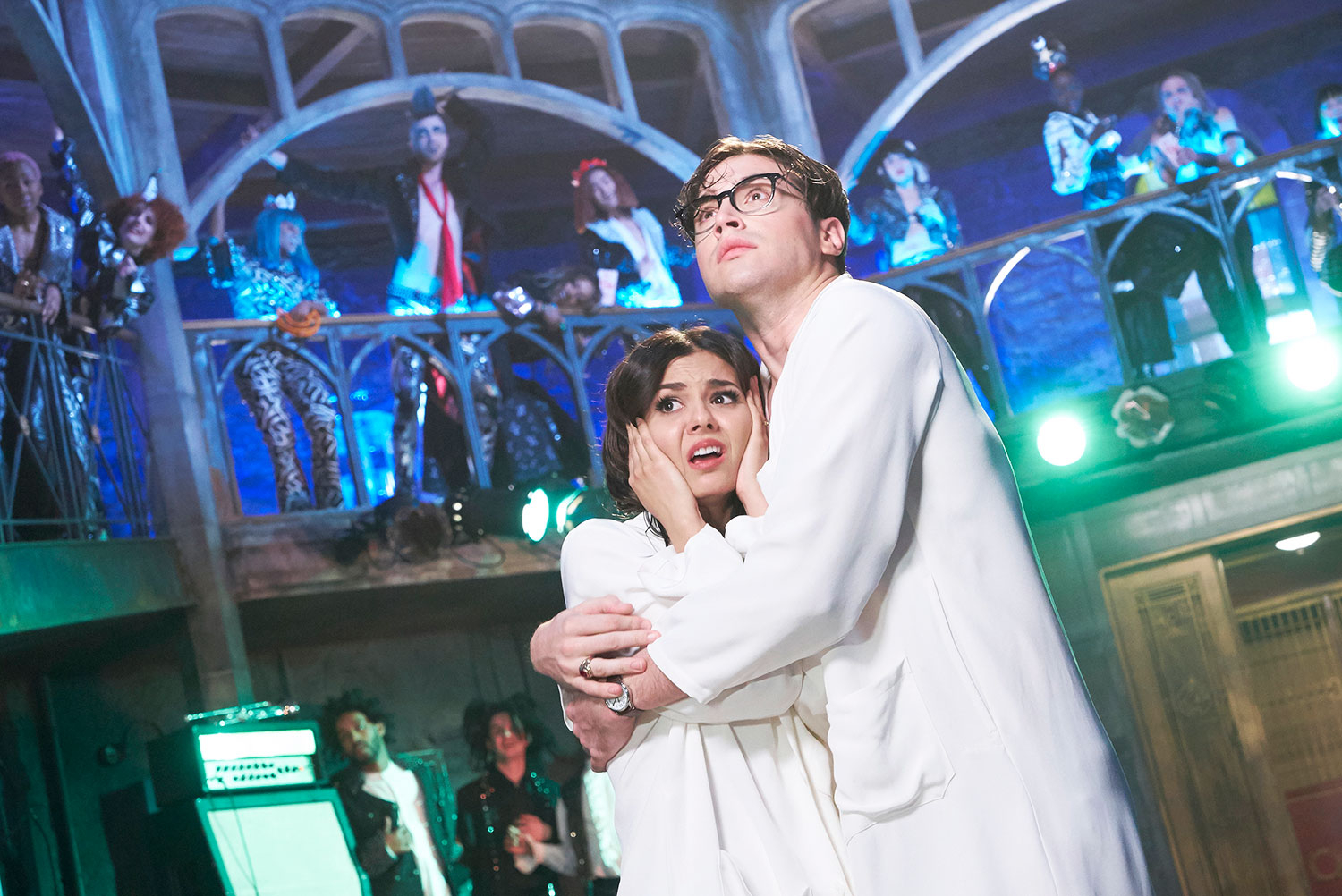 For Justice, who plays Janet Weiss – Sarandon’s role in the original – Rocky Horror is a marked departure from her previous works. “I like that she goes from being this virginal, shy girl,” Justice says, “to having a sexual awakening and realizing it’s amazing to express her sexuality and womanhood. [Janet] gets called a slut, like, every minute [by audiences at midnight screenings].” About halfway through the movie, her character – who has been in a bra and slip for most of the movie – seduces Frank-N-Furter’s scantily clad monster, Rocky, while singing the innuendo-imbued tune “Touch-a Touch-a Touch-a Touch Me” and rolling around with him in a bed. “When she finished the seduction scene, I said, ‘Forget about Nick – you’re never going back,'” Adler says.

Luckily for the actress, a 23-year-old who discovered Rocky Horror as a fifth grader and remembers loving its free spirit even then, she’d had enough time to get used to that scene. During the audition process, she had to sing “Touch Me” with a bevy of different Rockys for her screen test in full wardrobe (a bra and slip). “They were all super-buff guys and had body oil on them, so their abs would look crazier and super abilicious,” she says. “I had to kind of improvise. Kenny was just like, ‘Use the space. Crawl on them. Do whatever.’ So that’s kind of what I did and it was pretty fun. … Actually I was so sick that day. I had a stomach flu and I hadn’t been able to keep anything down or eat anything. But I pushed through and it ended up being good.”

Despite the libidinous script, Adler felt a major network was a better place for the Rocky Horror revival instead of on a premium network where he could get away with an edgier production. “This is a very broad audience,” he says. “Somebody’s gonna turn to that channel and see something they never thought they’d ever see, and I think they’ll really enjoy it and search out the original.” He and Ortega decided to film it, rather than perform it live as the prevailing TV-musical trends go, because they wanted to avoid falling into a fad.

“We’re coming to a place in our world and society where people are so much more vocal and accepting of all different types of people,” Justice says. “Regardless of what you recognize to be your gender or who you want to love, whether it’s a boy or a girl, I think we’re becoming a lot more open. This is only going to propel that more. It can only be a positive thing.”

By the time filming was done, Justice and Cox agree the cast felt like a family. And the more important triumph for Cox is that Frank-N-Furter felt real. “When I did ‘Sweet Transvestite,’ I was dog tired,” she says. “I walk into Frank’s laboratory and the dancers were bouncing off the walls quite literally, with so much energy and enthusiasm. So much love. It was Frank’s big entrance, and the character just completely took over. And for me as an actor, it is absolutely wonderful when I get to a place with a character where I am just watching her live her life.”