The first thing to know about Four Weddings and a Funeral, the series, is that it bears virtually no resemblance to Four Weddings and a Funeral, the Oscar-nominated 1994 romantic-comedy. It takes place in London, yes. There are four weddings and one funeral, sure. There is a floppy-haired fellow who is always late to the weddings, but, alas, he is no Hugh Grant. A beautiful American is one half of the central love story, but rather than elusive and enigmatic (a clever cover for Andie MacDowell’s wooden screen presence in the original), she is flighty and banal — this despite the fact that she kicks off the series embroiled in an affair with her married boss.

The main thing the TV show — from rom-com fanatic Mindy Kaling and her former Mindy Project colleague Matt Warburton — lacks is the frisson of a cast that clicks, portraying people so finely drawn they seem utterly, through-and-through real. Still, as entertainment is not a zero-sum game, the series is not a total failure. What it offers instead is something much closer to Kaling’s sweet spot: a comforting and predictable, if flawed, sitcom.

'Locked Down' Review: Once Upon a Crime in Quarantine

Thanks to the soft touch of screenwriter Richard Curtis at his erudite, self-deprecating, hyper-English best, the characters in the original Four Weddings aren’t types, they’re people; ordinary and yet specific enough that it’s as though they’ve been plucked from your own life, with romantic relationships that feel spot-on in their puzzling-on-paper rightness. The series, by contrast, is a rom-com paint-by-numbers. American friends Ainsley (an interior designer), Duffy (a schoolteacher), and Craig (a finance bro), have all landed in London post-college, seemingly just because. Political consultant Maya (English actress Nathalie Emmanuel, Game of Thrones’ Missandei, inexplicably being forced to play an American) abruptly abandons her life in New York City and joins them there, after her aforementioned affair blows up in her face. When she crosses paths with Kash, an Englishman who, unbeknownst at first to Maya, is engaged to Ainsley, sparks (supposedly) fly. The characters are all perfectly, blandly likable from the outset, with the possible exception of Ainsley’s pal Gemma and Gemma’s husband Quentin, an English couple who are cartoonishly snooty and uptight, presumably to underscore their highborn Englishness.

The limp-balloon feeling of the early proceedings is a potent reminder that nostalgia is a seductive but dangerous thing. Kaling and Warburton were clearly chasing the magic of the namesake film. But they seem so afraid to tarnish its legacy by imitation that they actually dart away from its blueprint altogether. (In an unsatisfying attempt to fill the void left by the original’s spirit, they layer nods to a host of other beloved romantic comedies, including Curtis classics Notting Hill and Love, Actually, into the first episode alone.) 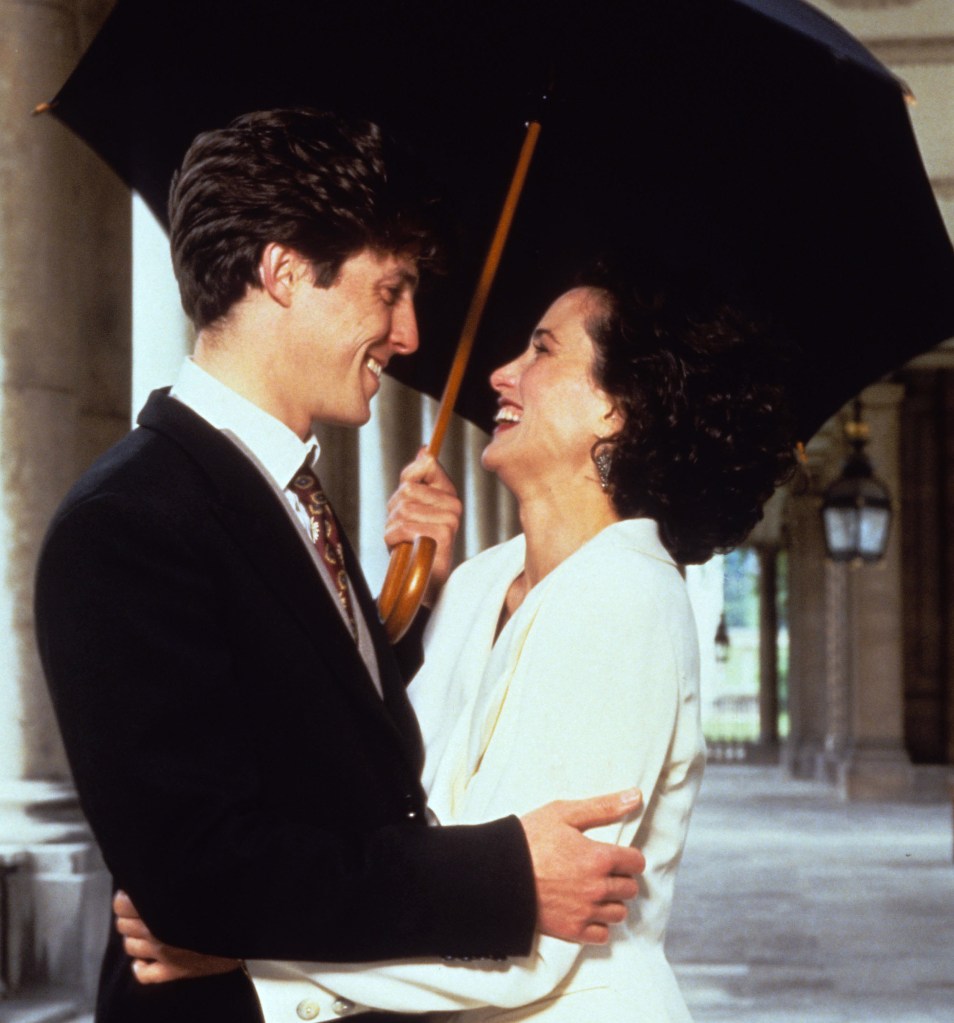 Grant and MacDowell in Richard Curtis’ ‘Four Weddings and a Funeral’

Many viewers may come to the series for just the same reason, hoping to recapture the blissed-out feeling they had after seeing the film for the first time. They will be disappointed, but the hunger for even a taste of the movie’s charm might also be just enough to keep them watching — and here, ironically, is the unlikely twist: Those who stick with the show will eventually be rewarded for their persistence by gradually looser, better-oiled writing, a couple of solid anchoring performances from Nikesh Patel as Kash and Brandon Mychal Smith as Craig, and secondary characters whose stories bring much-needed additional dimension, like delicious side dishes that make you forget the main course is undercooked.

The relationship between conservative politician Andrew and shop assistant Tony emerges as a sensitive exploration of the prejudices that exist within the gay community as well as without, even if the pair’s depth of feeling for one another feels unearned. Rom-com stalwart Dermot Mulroney shows up as a rugged Texan silver fox, nailing the part like the pro every Hallmark leading man wishes he were. And the light-on-his-feet Basheer, Kash’s best friend, brings genuine comedic relief to sometimes leaden proceedings. Thanks to Guz Khan’s easygoing, down-to-earth performance, Basheer is so endearing that by the time he falls for one of Kash’s dates (after chaperoning the budding couple around town, according to Muslim custom), you’re rooting for his love story as much as for that of any of the main players. The festive Muslim wedding that follows — highlighting the poignant custom whereby the pair behold one another as a married couple for the first time in a mirror — is not only touching, it’s a refreshing break from the main characters’ narcissism.

The fact that the show’s lone gay relationship and its Muslim wedding are ancillary rather than front-and-center does invite another unfavorable comparison to the original work: Though the movie glaringly features no one of color, the gay couple Matthew and Gareth are in many ways its romantic heart, the example of true love that the rest of their friend group is chasing. And one of the central characters, David, brother to Hugh Grant’s Charlie, is deaf (played by the deaf actor David Rower), a trait that is treated as no more defining than his eye color. For a film made in 1994, it manages to feel somehow more progressive than its 25-years-older successor.

So, why, in this oppressive TV age, where so much quality abounds, watch a middling, too-long series — 10 episodes at nearly an hour each — when you could spend that time on something of greater substance and sharper craft? For the satisfaction of the ending you know will come. (Spoiler alert: Guess which characters triumph through the incredible awkwardness of falling for her best friend’s guy/his fiancée’s BFF?) For an escape to a world where the most stressful, complicated element of a person’s life is that they don’t end up with the person they think they’re supposed to. (But they definitely all end up with someone.) For the chance to spend enough time with a group of characters that you locate their redeeming qualities amid the insufferable ones.

All due respect to Friends, but somehow, through some mysterious transitive property, settling in to watch Hulu’s Four Weddings and a Funeral starts to feel, by episode five, a little like watching the misadventures of Rachel, Ross, Monica, Chandler, Joey, and Phoebe. The jokes are expected, but land; the couplings don’t quite track, but their inevitability pulls you along. The series is no luxurious cashmere sweater, but it’s a comfy knit blanket to pull over you when the chill of your viewing queue — stuffed with bleak dystopias, dark antiheroes, emotionally raw comedies, and deeper grapplings with the meaning of life — strikes. Sometimes you just want a group of totally benign characters who’ll be there for you, when the rain of Peak TV starts to pour.