“Girls, I know this must feel very strange,” the woman in the black robe says. She is older, stern, severe, authoritarian; she’s addressing a group women seated in a circle, all of whom have been stripped of their reproductive rights, forcibly separated from their families and remanded to sexual slavery. “But ordinary is just what you’re used to,” she continues. “This might not seem ordinary to you right now. But, after a time, it will. This will become ordinary.”

The promise of a “new normal,” spoken by an apparatchik of a totalitarian theocracy – it’s chilling, and like so many other scenes in The Handmaid’s Tale, Hulu’s 10-episode adaptation of Margaret Atwood’s 1985 dystopian classic, it stays with you in part because it doesn’t feel unfamiliar enough. Like the book, the series – starring Elisabeth Moss, Joseph Fiennes, and Alexis Bledel, and which begins streaming on April 26th – takes place in the former United States now known as Gilead. A surveillance state with Puritanical roots, the nation has responded with violence to plunging birth rates caused by environmental crisis. Fertile women such Moss’s Offred and Bledel’s Ofglen are captives, forced to bear children on behalf of the barren wives of the ruling class. For them, voluntary intimacy remains forbidden, as are books. Conversation is largely scripted. “Praise be” greets all news of the war’s success; “under his eye” is a form of parting.

Best TV to See in April: 'American Gods,' the Return of 'Fargo' and More

From the moment it was published 35 years ago, The Handmaid’s Tale has been eerily prescient – because, according to its Canadian author, the horrific details of her work of “speculative fiction” have not been invented wholesale so much as plucked from history, particularly the Salem witch trials of the 17th century. Atwood often notes in interviews that it was originally written while she was living in Germany, when the fall of the Berlin Wall was still years away. Meanwhile, the Moral Majority was gathering momentum back in the States. When it came to authoritarianism or the disputed territory of the female body, she never had to look far for contemporary parallels.

Neither do we. The day after Trump was elected, sales of Atwood’s book increased 200% from the year before. It shot to the top of Amazon’s bestseller list, alongside George Orwell’s 1984. “It’s always been timely,” says Moss. “It’s just that now there are actual things happening with women’s reproductive rights in our own country that make me feel like this book is bleeding over into reality.”

The idea of adapting the book for television (it had previously been a movie and an opera) had been kicking around for years, well ahead of the current political climate. The project eventually ended up at Hulu and its partner, MGM. “Very wisely, they were hoping to find a woman to do it,” says showrunner Bruce Miller, who had read The Handmaid’s Tale countless times before adapting it to series. “I was 100 percent behind them – except I wanted the job. I always thought, as a story, it lent itself more to a TV series than to a novel, only because it was so rich and delicious that it begged to be explored further.” (Miller is already working on ideas for a second season.)

Moss is quick to point out that “the election that was happening and the show were separate issues, as they usually are,” but the toxicity surrounding the presidential primaries proved to be illuminating for the writers’ room. “There was something so openly nasty about the way people spoke about Hillary Clinton during the campaign,” says Miller. “It helped me understand people who have very different dreams for the world than I do, how they think.”

When filming began in Toronto last September, director Reed Morano, another longtime fan of the book who fought off bigger names to helm the season’s first three episodes, says: “I thought this could be a great cautionary tale. We don’t think about how women are treated in other countries as much as we should and I guess I thought this would raise awareness. Unfortunately, since the election, it’s about how it’s relating to us.”

Changes to the book had already been made, mostly with the approval of Atwood, who, at 77, makes a memorable cameo during a scene that depicts mandated slut-shaming. The story was updated to fit the times – Uber and salted-caramel ice are among the deprivations in Gilead – but the most crucial difference is the inclusion of people of color, who had been systematically banished from society in the book. Offred’s best friend Moira (Orange is the New Black‘s Samira Wiley) is a black woman, and openly gay until homosexuality becomes a crime punishable by death. “On TV, if all you see is an all-white world, what’s the difference between making a show that’s about racists and making a racist show?” Miller says. “You’re still telling the white-girl story. My central idea for Gilead was that fertility trumps everything.” 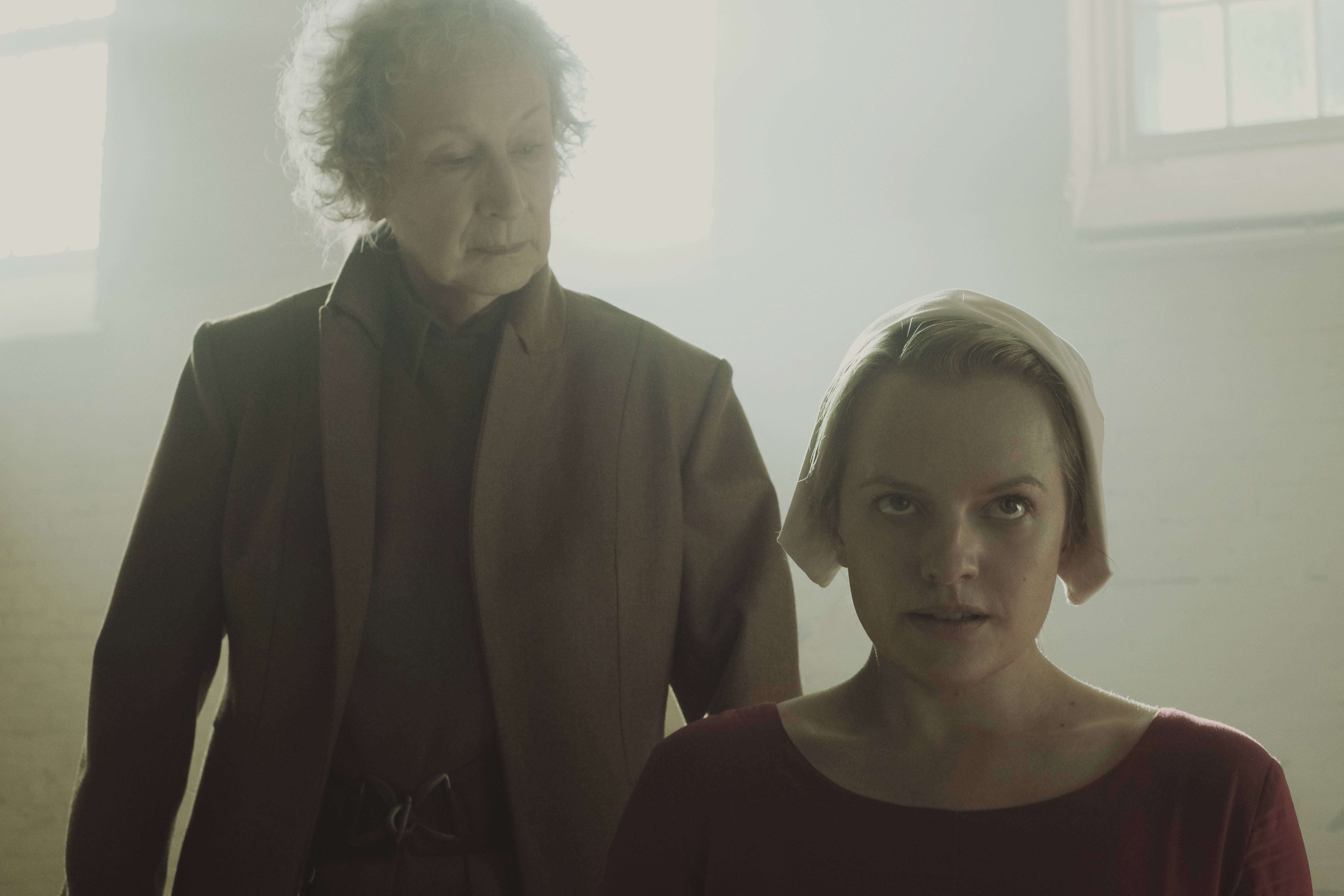 The imagination doesn’t have to stretch to see the ways in which our own
country already treats fertility and motherhood like a punishment
instead of a power: America’s appalling lack of mandated maternity
leave, or the frequent challenges to birth control access and abortion.
In part, this is what makes The Handmaid’s Tale so relevant to
each successive generation. “The forces that led to the alt-right –
forces that were in the book already, rolling back women’s sovereignty
over their bodies – were there before the election,” says Miller. It’s
also what drew Moss to the role. “[Offred] is not somebody who has any
extraordinary skills. But you take everything away from her, as a woman
and as a human being, and she ends up using her femininity and her
womanhood, the very things that enslaved her, to survive,” she says.

Other embellishments of the book’s minor details speak to the series’ own uncanny foresight. (Warning: spoilers ahead.) During a flashback in episode three, after women have been summarily fired and their bank accounts confiscated, they take to the streets to protest. “The impetus behind that was, in a pre-Gilead situation, when women’s rights are being stripped away, obviously modern women and men would stand up and fight,” says Morano, who filmed the scene last October, long before millions of female demonstrators gathered in January to protest the newly sworn-in Trump. “I knew I had to have people chanting something and carrying signs, so I was looking up protest chants from the past for examples. When the Women’s March happened, we were looking at each other like, This is so fucking crazy.” She pauses. “A few months later and I would have been so familiar with those examples.”

Still, fans of the book will be relieved to know the adaptation remains faithful. The primary challenge for Morano was turning what she calls this “internal, cerebral story” full of flashbacks and voiceover into visually arresting episodes. She opted for intense close-ups of Moss’ expressive face and, along with the wardrobe department, paid careful attention to color. The handmaids wear rich vermilion dresses, the wives they serve sport a startling peacock blue, and it makes for disturbing symmetry, particularly during the series’ microscopically accurate depiction of the Ceremony, when Offred must rest her head in the lap of Serena Joy (Yvonne Strahovski), the lady of the house, and submit to sex with her husband (Fiennes).

“On TV, if all you see is an all-white world, what’s the difference
between making a show that’s about racists and making a racist show? You’re still telling the white-girl story.”–Showrunner Bruce Miller

It’s worth noting that these scenes were shot around the same time as Trump was heard on tape making the now-infamous declaration that men of a certain status were entitled to sexually assault women. “We spoke about [that] extensively in the writers’ room,” says Miller. “We even had conversations about Serena Joy’s genesis: How politically active was she?” (Presumably, she would have been among the 53% of white women who voted for Trump in spite of the offensive, pussy-grabbing remark.) Moss agrees that in the run-up to the election, and certainly afterwards, “the show started to become a bit more personal – less of a hypothetical,” she says. “When someone uses the word ‘host’ in connection with women, that hits a little too close to home.” (For example, the lawmaker from Oklahoma who advanced this language in an anti-abortion bill last February.)

On November 9th, Morano sat down to edit two of the episodes. She found the footage had a whole new resonance – in particular a scene in which Offred, standing outside the prison of her new home, muses: “It doesn’t seem as if it should be the true shape of the world. Now darkness and secrets are everywhere. Now there has to be an us, because now there is a them.” The director says it was “one of the hardest, most gut-wrenching” moments for her. “That idea of remembering the way it was,” she continues. “I think back on the way the New York City skyline looked before September 11th. It was so awesome, what we used to have. Now it’s a distant, distant memory. A lot of the storytelling in the episodes is trying to tell a memory of the things we took for granted.”

Miller says that while he didn’t deliberately add anything to the script after the election, “it might have unconsciously influenced some revisions.” Then again, terrorism giving rise to nationalist tendencies across the globe, travel bans that target Muslims, threats to defund Planned Parenthood, sanctioned fear of transgender people, a vice president who can’t dine with a woman he isn’t married to – the germ of all of these reactionary ideas were already there. “The fact that people are fleeing this country and sneaking over the border into Canada to get away from the U.S. is something explicitly in the book,” says Miller. “I can’t believe I’m seeing this in my lifetime.”

In fact, perhaps The Handmaid’s Tale “isn’t just entertainment anymore,” to borrow Moss’ words. Television has been steadily moving toward dark and discomfiting places – but going forward, will the appetite for dystopic art be increased or diminished? “We did not want to be a show that would actually make people too afraid or sick to watch,” says Morano. “I think in times of duress people look for signs or, like, a guide.” Consider a scene of Offred walking along in silence, reflecting on what was supposed to be a temporary suspension of the Constitution in response to a terrorist attack: “Now I’m awake to the world. I was asleep before. That’s how we let it happen. Nothing changes instantaneously. In a gradually heating bathtub, you’d be boiled to death before you knew it.”

From a resonant take on ‘The Handmaid’s Tale’ to the racially charged satire ‘Dear White People’ – the 10 best movies and TV shows to stream in April.