Lakeith Stanfield: From 'Atlanta' to the Busiest Man in Showbiz - Rolling Stone
×
×

When you’re Lakeith Stanfield and you happen to play a guy like Darius, the pothead-philosopher of FX’s Atlanta — and not just play him, but turn a hit show’s comic-relief role into the sort of weirdly relatable oddball that becomes an instant fan-favorite — it’s natural that complete strangers would want to get you high. At the club, in a mall, walking down the street — doesn’t matter. “The funny thing is, they assume I smoke,” the 25-year-old actor says of the show’s fans. “And you know, I don’t. But yeah, I get a lot of offers. I’ve had three very large bags of pot just handed to me. My friends like hanging around because they get free weed.”

It may have been Donald Glover’s surreal sitcom that’s helped Stanfield go from who-is-that-guy to a High Times icon. But for the last few years, the prolific performer has been quietly building a rock-solid resumé through a series of high-profile supporting turns – from Straight Outta Compton (check out his Snoop Dogg) to Selma (that’s him as Civil Rights martyr Jimmie Lee Jackson), Brad Pitt’s why-we-fight satire War Machine to Jordan Peele’s monster horror hit Get Out. And this month, he’s putting his Southern stoner act on hold in two leading roles: First up is Crown Heights, which won the U.S. Dramatic Audience Award at Sundance and hits theaters on August 18th, which finds him playing Colin Warner, a Trinidadian immigrant unjustly accused of murder in 1980. He then spent 20 years trying to clear his name and not lose his mind behind bars. “I had to keep telling myself, ‘Toughen up,’ doing those prison scenes,” Stanfield says. “It fucked with my head. But his family came up to me after we showed it and they had tears in their eyes. It’s like, ‘Right, that’s why I do this.’ ”

And then there’s Death Note, Netflix’s (semi-controversial) Americanized version of a Japanese franchise which hits the streaming service on August 25th and cast Stanfield as the resident super-sleuth good guy, “L” — an eccentric genius who compulsively gobbles candy and hunts down vengeful teens controlling a demon to do their bidding. “He’s like Einstein as a detective,” says Stanfield. “We share a lot of similarities, so it was a good role to take on, you know?” What kind of similarities? “Well, he’s a little Aspergers-y,” he replies. “L is a pretty awkward guy, and I definitely feel like that. Like, a lot.“

Stanfield stops to think. “And he hates shoes — I used to go to high school without shoes, so I get it. Like, fuck shoes, you know?”

High school was also where Stanfield started honing his performing chops, gravitating towards the drama department while growing up in Victorville, California, a parched patch of San Bernardino County. “It’s in the desert,” he says, “which is a landscape without a lot of distractions … and lots of room for your imagination.” It’s also a region that’s been hit by its share of tough times and economic hardship, something that Stanfield has written about in songs for his rap group Moors; in “Gas,” he paints a picture of folks scrabbling in a small town – “It’s so simple, to slip into abyss/When you walk on hope and your mentals are your friends” — just to get by. “It comes from something my friend would say: ‘Man, I’m outta gas,'” he recalls.

And though his upbringing was not exactly idyllic — he’s referred to his family in the past as “dysfunctional on both sides” — he notes how he’d “do different characters to entertain my family, and they were the ones that kept pushing me to take it further. They could have told me to just shut the fuck up. And they didn’t.”

When Stanfield decided he might want to pursue acting, he did what most enterprising folks with no connections to the industry would do: He simply Google-searched “actor.” “You trying to bust me on this, Rolling Stone?” he jokes. “Damn, man. Ok, it may have been Yahoo. You got me!” That led Stanfield into “some shady things” in L.A. before he hooked up with a John Casablancas Modeling and Acting Agency. He went out mostly for commercials at first, and didn’t really care if he got them. He was just trying to figure out how the whole thing worked. Then a small part in a short done by filmmaker Destin Daniel Cretton led to Stanfield getting a supporting role in the director’s modest drama Short Term 12, co-starring Brie Larson. It earned him an Independent Spirit Award, and that led to bigger gigs ranging from music videos – notably Run the Jewels’ “Close Your Eyes (and Count to Fuck)” – to several other crucial bit parts. It was also because of that Short Term role, Stanfield says, that Donald Glover started tailoring the Atlanta part for him. 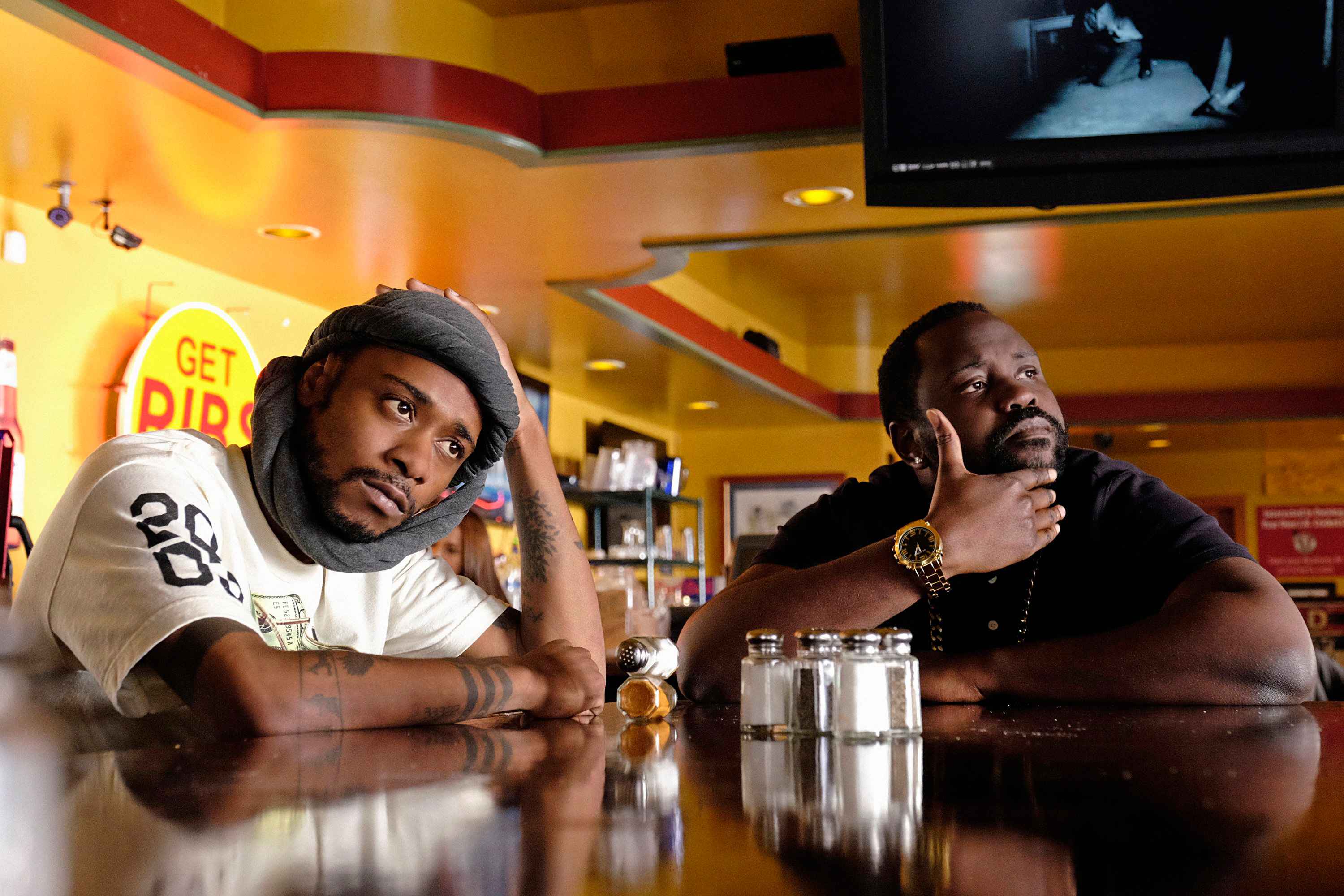 The second season of which is due out next year, and though he hasn’t seen any scripts yet, Stanfield says that “knowing those guys, I’m sure it’s gonna be good. Atlanta is designed as a reflection of the world around us, and given everything that’s happening right now,  I’m sure they’re going to have a lot to say. And, of course, there’s been lot of speculation about killing Darius off – I’m kidding.” Meanwhile, he has more movies coming out, from a coming-of-age story Quest to the preacher drama Come Sunday; when we talk, he’s in Oakland working on musician Boots Riley’s debut feature Sorry to Bother You, about a black telemarketer who perfects a Caucasian phone-voice, and he keeps getting interrupted by calls to return to set. Plus he’s just become a father for the first time – all of which, he says, would have seemed impossible a few years ago: “I remember living in my car and learning how to fail at getting commercials. I just wanted to build a cool little résumé. I stopped giving a fuck. And then it happened.”

Stanfield’s Hot Streak: A quick look at the young actor’s defining roles of the past year

Atlanta
Stanfield’s breakout performance as a stoner rap-star sidekick is, he says, the missing link “between the show’s far-out, imaginary world and the real world. Darius can talk about morality and then cryptically call his gun ‘Daddy.’ The extreme parts are what make him so fun to play.”

Crown Heights
A real-life Brooklynite, wrongfully convicted in the Eighties, spends two decades trying to clear his name. “He made me realize that, even after 20 years in prison, you can be a good person,” Stanfield says of the movie’s subject Colin Warner. “It was humbling to be allowed to walk in those shoes.”

Death Note
Of the manga adaptation’s supersleuth, an orphan with a genius IQ who dresses like a hoodie-wearing ninja while solving a series of unexplained murders, Stanfield says, “There’s not too many things outside of his focus that he’s concerned about, and I kinda feel the same way.”

The Incredible Jessica James
Stanfield plays star Jessica Williams’ ex-boyfriend, the one she can’t quite get over; she eventually dreams of him declaring his undying love one last time before getting crushed by a piano. The Netflix rom-com “came at me at a weird time,” he told The Hollywood Reporter after the film’s premiere at Sundance. “I was going through a relationship transition. I’m like, ‘Yeah, I must need to do this.’ ”