Picture the great, morally conflicted antiheroes of the TV canon: Tony Soprano, Don Draper, Walter White. You can now add to that mental list of “difficult men” a bitter, washed-up sitcom actor who also happens to be a cartoon talking horse.

The premise of Netflix’s animated tragicomedy BoJack Horseman — that a depressed, alcoholic pony (voiced by Will Arnett), still coasting on his popularity from starring in a Nineties Full House-styled program, is attempting to engineer his own comeback — sounds like the something a viewer might stumble upon at 3 a.m. on Adult Swim. But as unlikely as it seems, Raphael Bob-Waksberg’s brutally sad comedy, which starts streaming its third season today, is more in tune with psychological complex “Prestige TV” like Mad Men and The Sopranos — meditations on addiction and existential panic can peacefully coexist with a majestically convoluted running joke about an Uber knockoff staffed by Orca whale strippers. It is, to put it mildly, weird — and doubly so in that this absurdist animated parody of anthropomorphic showbiz C-listers makes the majority of “regular” TV programming look like kids’ stuff by comparison.

The Mane Event: 'BoJack Horseman''s Cast on Their Favorite Sitcoms

“I had been living in the Hollywood Hills, just moved there from New York,” Bob-Waksberg said, recalling the couch-surfing period in which BoJack was born. “I didn’t really know anybody, but a friend of a friend of a brother of a friend had this big house that I was able to stay in, [just] one tiny room in a giant house overlooking all of Hollywood. I remember sitting out on the deck, looking over the lights of Hollywood, it’s so glamorous. I was so high up, literally on top of the world, but more isolated than I had ever felt before. That feeling is the beginning of the BoJack character for me.”

He found a simpatico spirit in artist Lisa Hanawalt, with whom his funhouse take on show business instantly clicked. “I wanted a heightened version of L.A.,” the animator said. “We take liberties and create an enhanced version of what Los Angeles looks like.” But more importantly, she was responsible for the genesis of Horseman the horse-man. “I’ve drawn humanoid animals since I was six years old. I recently went back and looked at some old work, and I was drawing horse- and dog-people in patterned sweaters.” Bob-Waksberg had been a fan of her art for some time, and thought that her creations would be the perfect vessels for BoJack Horseman‘s antic visual puns and its sense of gnawing emptiness. 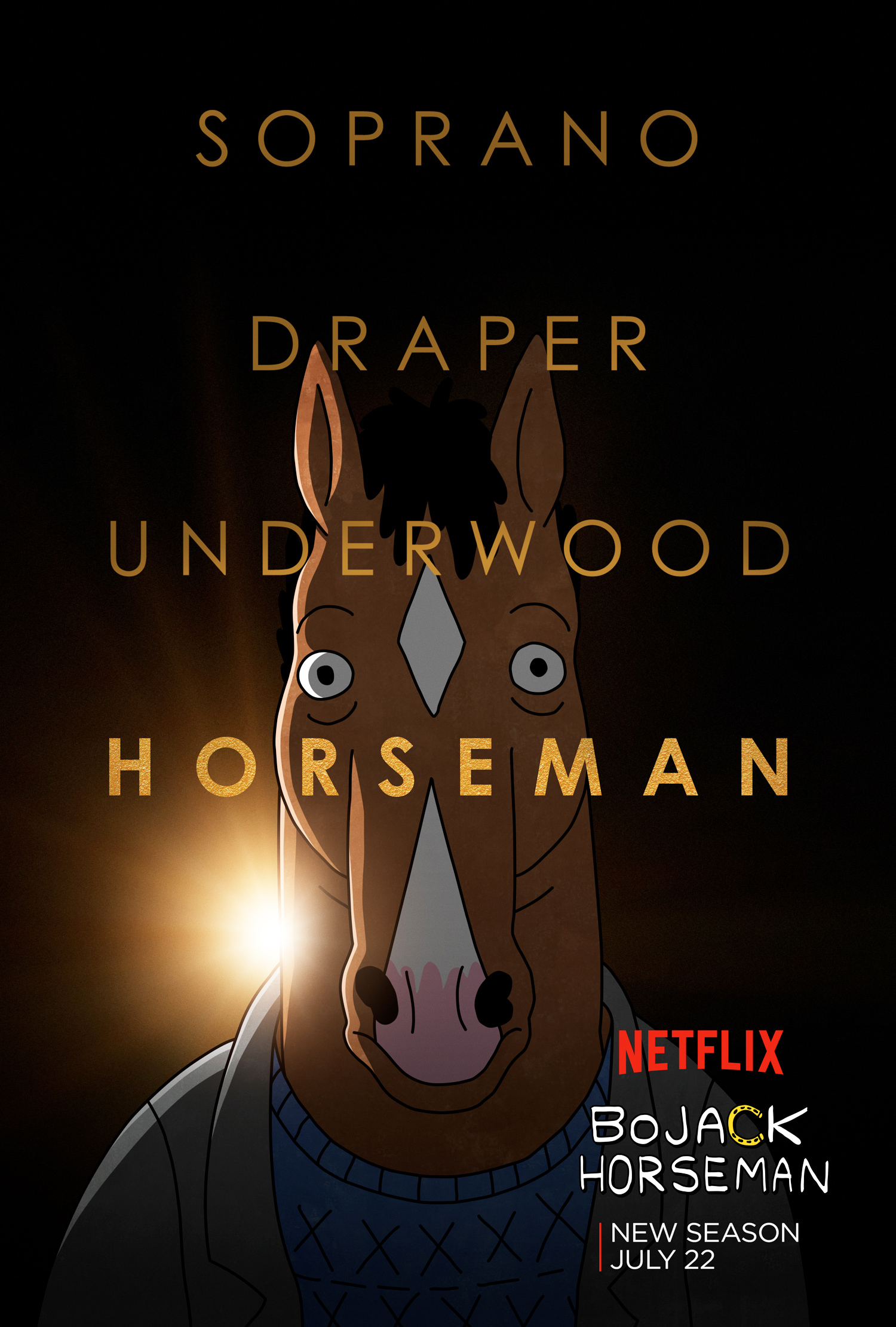 From the way, way-out pop-culture allusions (a passing familiarity with the “Dan Smith Will Teach You Guitar” posters will enrich one scene) to the unapologetic depths of melancholia that the show’s animal antihero regularly plumbs, BoJack Horseman was a hard sell. “We had this 15-minute pilot presentation, a sort of mix of what the first two episodes ended up being,” Bob-Waksberg says. “I went to Netflix and spelled out the whole season, episode one all through episode 12. I told them, ‘It’s gonna start and feel like your typical animated show, and then it’s gonna get darker and darker as the season progresses until by the end of the season, you’ll have feelings and not know where they came from.'”

Indeed, the early episodes seem to favor ridiculousness over pathos — like BoJack stealing the ‘D’ from the Hollywood sign in a drunken stupor (the town is referred to as ‘Hollywoo’ from then on.) And while it was often laced with unexpected emotional gut-punches, each season’s back half descends far, far deeper into the ugliness of life on the showbiz periphery. BoJack turns to be a more despicable person as the show progresses; later episodes reveal a heartrending past and a ruthlessly abusive mother. And the show’s second season concluded with the character hitting his absolute rock bottom, coping with rejection from an unrequited love by nearly giving in to her teenaged daughter’s sexual advances.

The first two seasons saw BoJack getting everything he wanted — another shot at fame, the role of a lifetime in a biopic of champion racehorse Secretariat — and then spiraling out of control when he realized it wouldn’t fill the gaping void at his center. But the show truly hits its stride during this new season, which sends BoJack out on the awards circuit in support of an Oscar campaign as the writers pull off some of their most artistically ambitious gambits to date. “One of the overarching themes of the series is that ‘better’ and ‘worse’ are kind of illusory,” Bob-Waksberg said. “You think things are better, but they’re not, or the thing you think will make it all better makes it all worse.” 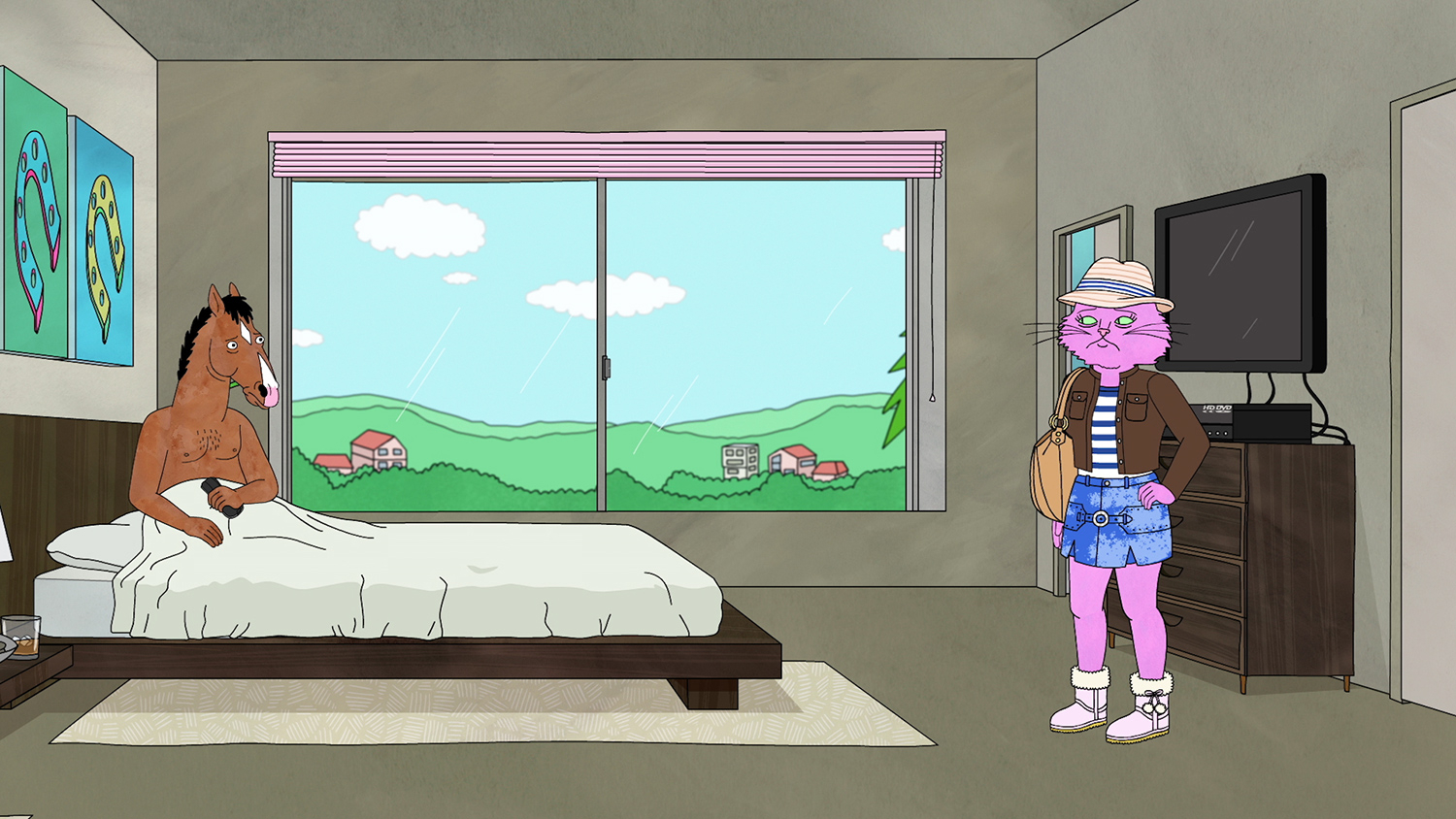 Those might sound like pretty heavy sentiments to come from a cartoon about animals, but the guy who integrated a pop-rap single about violent abortion imagery into his show’s latest season understands that the line separating humor from bleakness is razor-thin. The Prestige TV pantheon is largely connected by allowing for nuance on complex matters, and for BoJack Horseman, the fact that its brightly-colored bizarro Hollywood flourishes in shades of grey is its biggest strength. Going in to the show, it seems preposterous to think that an edgy, oddball cartoon about self-destructive, near-suicidal horse deserves to be mentioned in the same breath as the most beloved primetime dramas of the past few decades. After seeing the show’s three seasons worth of equine bad behavior reimagined as a desperate cry for help, it seems impossible not to think of it as worthy, if unlikely company for those landmarks.

“I don’t believe in good people and bad people,” he says. “I think we’re all trying our hardest, and a lot of times we do bad things and need to do more good things. We need to be more caring, more forgiving, more loving. Our better angels get clouded and we’re more selfish than we should be, more anxious or neurotic or desperate or self-sabotaging. Crueler, even. But I do think there’s hope for everyone … I think redemption is possible for anybody.”