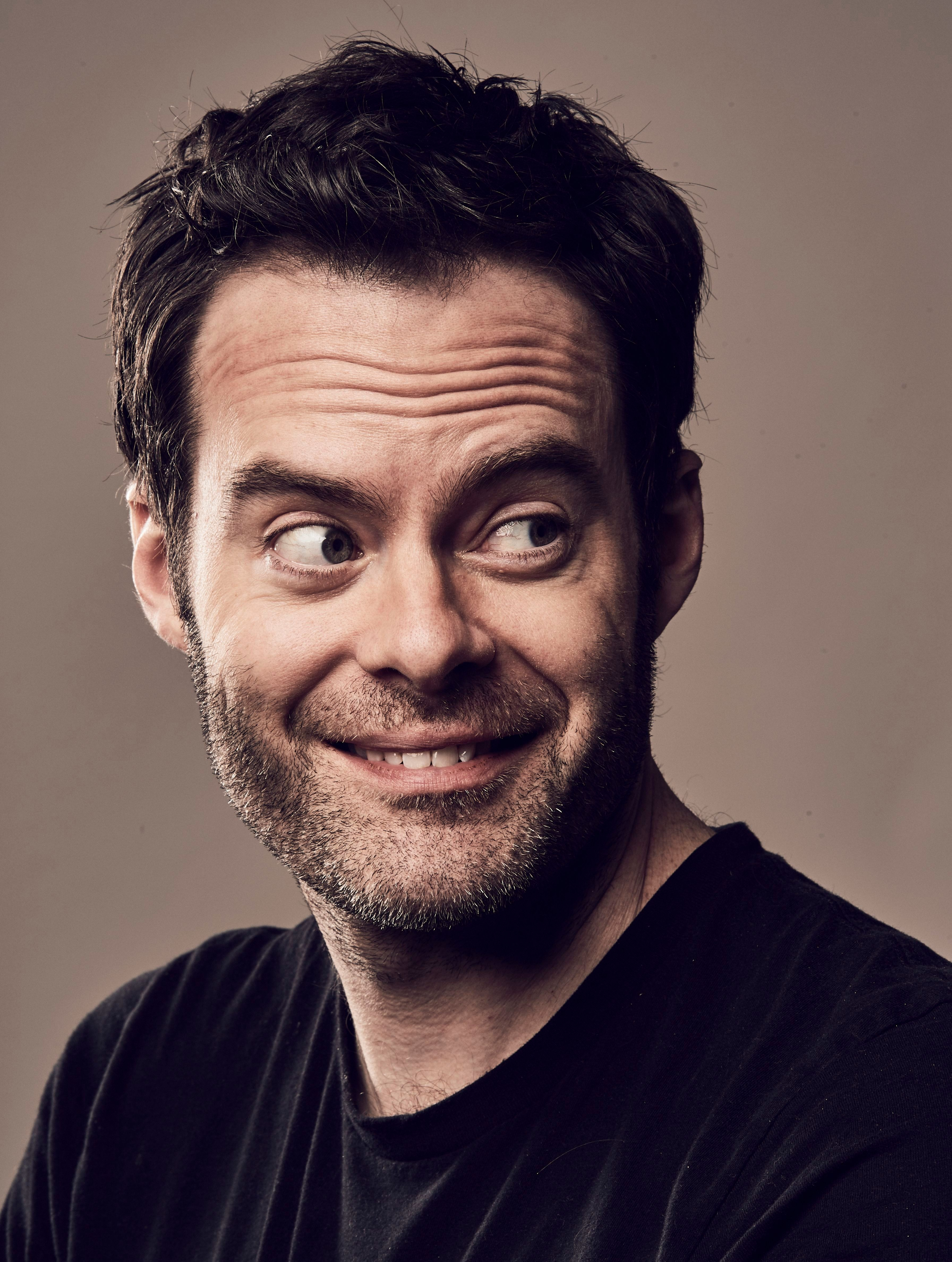 Inside Farmshop, an overcrowded, overloud Santa Monica, California, artisanal-type-food joint, the 20-year-old Bill Hader is giving the 39-year-old Bill Hader a pretty good goddamn dressing down. “Fucking loser,” the younger spits at one point. But does grown-up Bill take umbrage? Does he rail at his interior monologue, trying to scare it back into the depths of his psyche? He does not. Sitting there – regular jeans, dark blue sweater, very California casual, fork in hand, knife bearing down on steak – he just laughs, shakes his head, arches his grand Hader eyebrows, bulges his big Hader eyeballs, gives a snort of disbelief and carries on.

In fact, all around town and beyond, Hader is known as one of the nicest guys ever. “I have not seen another side of him,” says Henry Winkler, who costars with Hader in his new serio-comic HBO series, Barry, about a hit man (a really good one) who decides to take an acting class and become an actor (and boy, is he bad). “I have yet to see the other shoe drop.”

Sure, he’s got his peccadilloes and failings, drinks way too much coffee, loves sugar too much, has a fondness for Amstel Light and typically falls asleep at night with a laptop on his belly, Forensic Files playing – a big vice, that one. “Never seen Friends but I’ve seen every episode of Forensic Files,” he says. “I kinda just drift off to, ‘They found the DNA on the body …’ and then I’m [snoring].

“And then there’s this show Snapped,” he adds, “about women who kill. It’s always about love triangles gone wrong. There’s always a part in the show where they go, ‘And that’s when she snapped!'” He bobs his noggin, mirthfully. “I love true-crime shows.”

Even so, he probably isn’t the guy you want covering your back during a knock-down, drag-out, since he’s never hit anyone and himself only recalls being hit once. As he remembers it, he was 14, wearing a pair of cool pump-’em-up sneakers. This older kid appeared out of nowhere, punched Hader in the face, knocked out two of his bottom teeth, leaving him staring up at the sky, shoeless, saying, “‘Man, you could have just asked for them. You didn’t have to knock my teeth out. I would have given them to you.'”

See? Nice to a fault. And while that might suggest perpetual pathetic loser, such has never been the case. After the obligatory six or so years spent wandering in the Hollywood wilderness, his ride up to Barry has gone by with almost nary a hitch: eight seasons on Saturday Night Live, 2005 to 2013, a utility player best known for his impersonations (Al Pacino, John Malkovich, Clint Eastwood, almost everybody except for Christopher Walken, who he says he was never was able to master) and the dopily delightful, raunchy club kid, Stefon; comedic supporting roles in Judd Apatow-world movies from 2007’s Superbad to 2015’s Trainwreck; nasally memorable voiceover work in animated movies like 2009’s Cloudy With a Chance of Meatballs and 2016’s Finding Dory; South Park producer and creative consultant from 2009 on; occasional comic book writer; one of the masterminds behind the IFC parody series Documentary Now!; and since 2013, Robert Downey Jr’s successor as the voice of Mr. Peanut, despite having a serious peanut allergy. So, no, not a loser, at least not in the career sense. 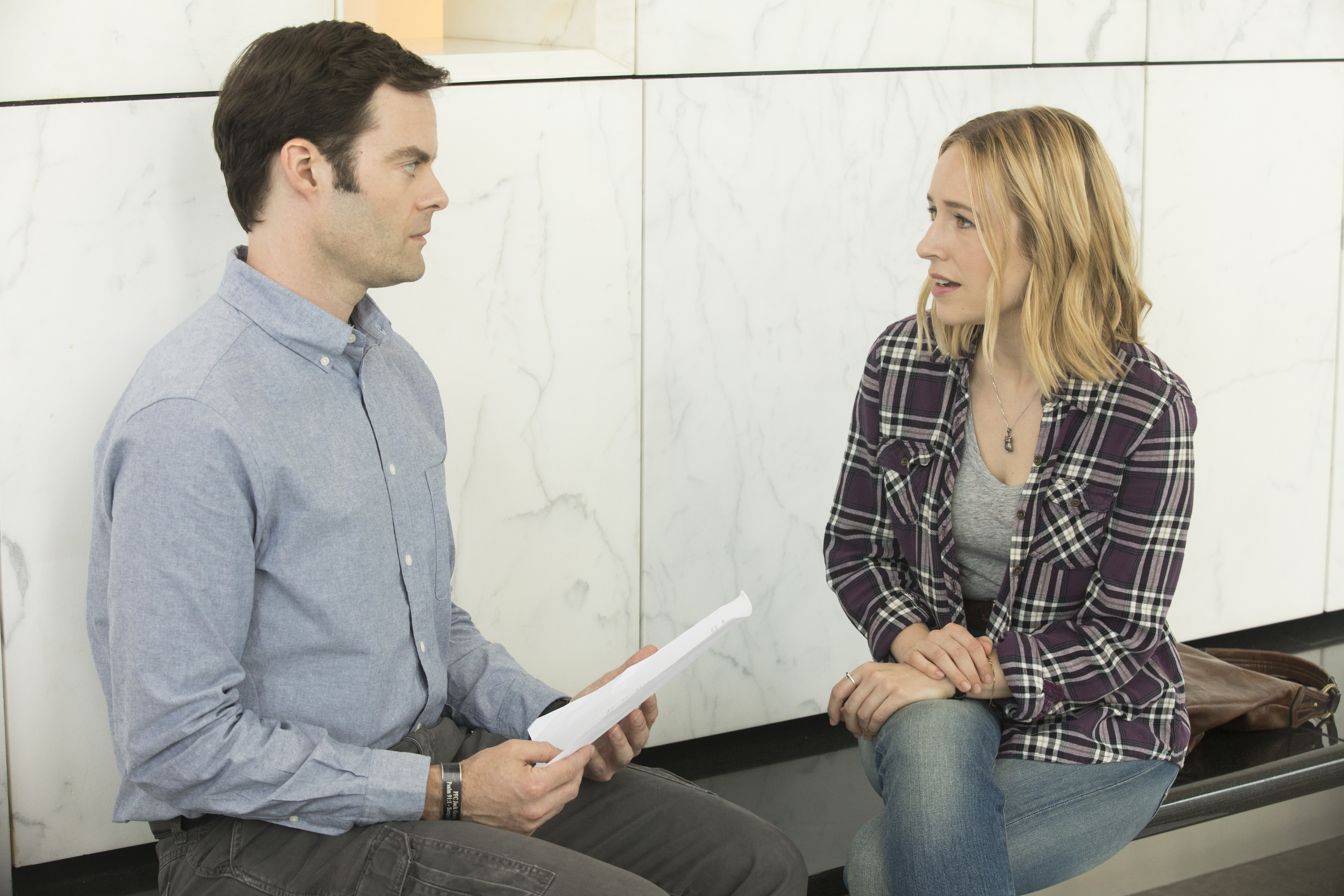 But that does not mean the voices stop talking to him, taking him to task. It’s time for a change of scenery, but before leaving, he stops by another table to chat with someone he knows. “She’s my kid’s piano teacher,” he says a bit later. Then, scowling: “The 20-year-old me would be like, ‘Man, ya should be hanging out with, like, you know, Mike Gordon, from Phish.’ Again, if I was 20, I’d be like, man, what a fucking loser you are.”

He pushes on, headed toward a cup of so-called handcrafted coffee at a place called Caffe Luxxe, along the way telling about growing up in Tulsa, Oklahoma, where his father operated an air-freight company, and he was about as innocuous and inoffensive a kid as they come. Basically, from the age of seven on, all he did was watch movies. Then, as a teenager, Hader used his dad’s video camera to make “little horror and comedy shorts with my sisters,” he says. “I was always goofy, kind of a spazz, but I never really got into trouble. I never shoplifted, never got suspended from school or sent to the principal’s office. Never really drank, even though I started smoking cigarettes what I was 14, Camel Lights. And, yes, my senior year, I was voted class clown.”

Terrible grades allowed him to only attend Scottsdale Community College, until the day in 1999 when he asked himself the question, “What the hell am I doing?” The answer was: move to Los Angeles, where he attempted to find work as a production assistant but instead, at one point, wound up as a gopher for Playboy’s Night Calls cable show, fetching coffee for porn stars, a job he quit within a month, in part because he didn’t want to tell his parents about his life in pornland. He eventually wound up joining the Second City comedy troupe and, in 2005, landed a job on Saturday Night Live, where, throughout, for the next eight years, he suffered from debilitating stage fright. His hands shook, he couldn’t breathe. Worst of all were the migraines. “They were off the charts,” Hader says. “I was so nervous all the time and I was smoking like a chimney.” Sometimes they were blinding, “I-can’t-see-anything” migraines. “I’ve stopped smoking, and I don’t get them so often anymore.”

But the nerves did have one positive result. While impersonating Julian Assange in a 2010 episode, he couldn’t figure out what to do with his fluttering hands, so he took a brandy snifter and held it in front of his face, which comforted him greatly – and which he reprised, steepling his fingers to cover his mouth, while giggling like crazy as Stefon, which became a big part of that character’s loopy appeal.

He also went to a shrink and that helped, too. He ponders this for a moment. “You know,” Hader says, “if I were in my 20s and I heard me say that, I’d be like, ‘What? You went to a therapist? Exercise? Meditation? I mean, oh, my God, give me a break.'” Will that 20-year-old ever shut up?

He’s inside the coffee place now, ordering a cup of the house blend, black, no sugar, and pondering a pile of ginger snaps, lots of sugar, looking at them like he’d look at a smorgasbord of cafeteria food, silently and at length, him saying to himself, “Do I want that? Can I have that? I should just eat that. Why shouldn’t I eat that?”

Says his childhood friend and Barry writer Duffy Boudreau, “Bill can be an anxious guy. He burns a little too much energy worrying.” Says Henry Winkler: “He gets nervous, but I think his nervousness feeds his wonderfulness because ultimately he has nothing to be nervous about.”

And then, as happens today, somewhere in his head he hears his dad saying, “Live your goddamn life!” and off in that direction he goes.

“I’ll take two of those ginger cookies,” he says, manfully, “and you can put them right in my hand. This is exciting!”

Or what passes for excitement in the world according to Hader. He recently divorced his wife of 11 years, amicably, of course, and is apparently not about to go out hound-dogging around. “I’m doing nothing. Nothing at all. You know? I’m happily doing nothing.” He says his only vices are buying books, Blu-rays and records. What’s he listening to these days? “Jazz,” he says. And then he says, “Yeah, 20-year-old me would fucking kick my ass for listening to jazz, too.” In fact, there seems to be no end of reasons why the young Hader would want to kick the ass of Hader the elder. Meanwhile, he’s doing his best to live his life, temptations of the ginger-snap variety notwithstanding.

We asked cast members, hosts and writers about the most memorable SNL sketch they wrote, starred in or just saw on TV. Their answers were full of great stories and surprising picks. Watch below.