Hulu’s High Fidelity, released on Valentine’s Day, deftly walks the line between remake and reinvention. The terrific new series features a lot of material specific to its characters, like the uniquely self-destructive quality of its Rob (Zoë Kravitz), or the running gag about how she’s never seen The Sopranos. But along the way, it also frequently pays homage to the classic Nick Hornby book, and the equally classic 2000 film starring John Cusack as Rob.

Here are some of the series’ most interesting remixes of familiar moments from the book and/or movie. (Spoilers obviously follow.)

Simon gives the “things that you like” speech (Episode 1) 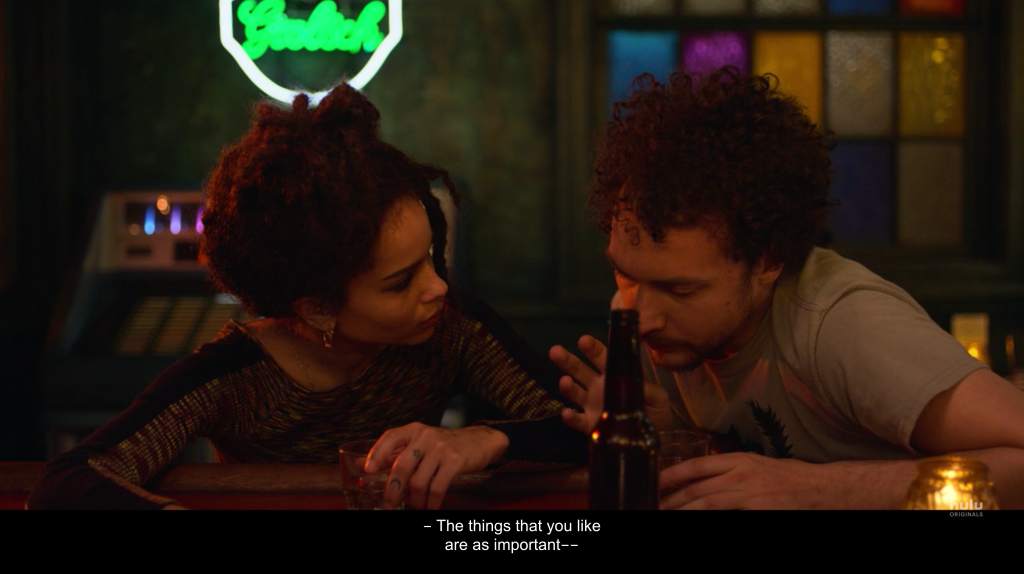 One of the most spot-on passages of the novel involves Rob insisting, “What really matters is what you like, not what you are like.” He has built his entire identity and life philosophy around his taste in music, movies, and books, and finds any other idea of compatibility absurd. Kravitz’s Rob (née Robyn) shares many of book/movie Rob’s tastes, but her relationship foibles come from a different emotional place. So instead, that particular theory gets espoused by David H. Holmes’ Simon, a colleague and ex of Rob’s, during the brief period between when they started dating and when he came out of the closet. (Rob does agree with the idea, though.) 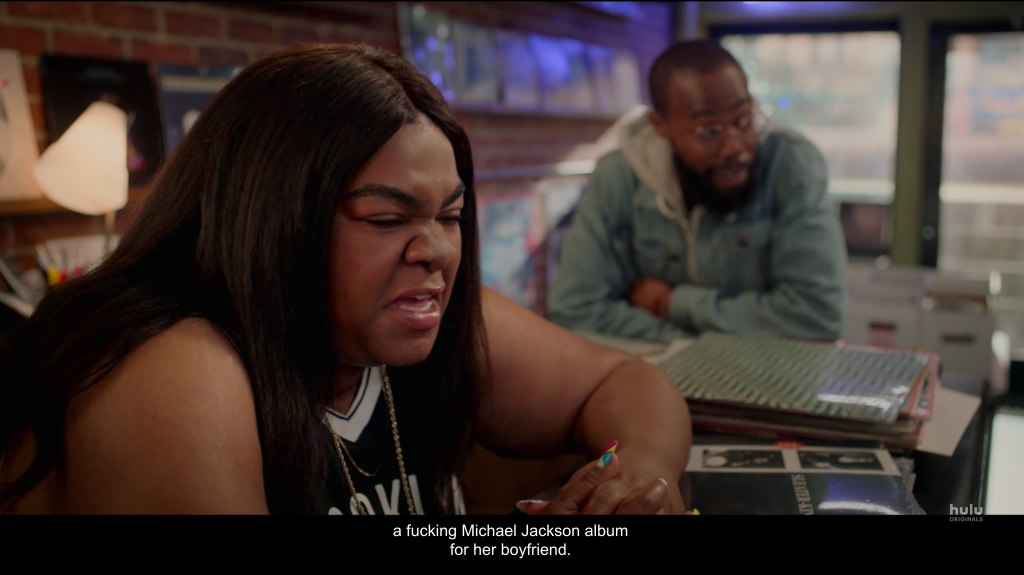 In the earlier versions, Championship Vinyl clerk Barry (played in the movie by Jack Black), chases away a customer attempting to buy a copy of Stevie Wonder’s corny hit single, “I Just Called To Say I Love You” — much to the frustration of Rob, who needs all the business he can get. Here, it’s a more democratic debate among the store staff when Da’Vine Joy Randolph’s Cherise (who has replaced Barry, while Simon has replaced Dick, the clerk played by Todd Louiso) gets upset that a customer is attempting to buy Michael Jackson’s Off the Wall album, in light of what we now know about the late King of Pop’s alleged crimes against children. Rob points out that Cherise still listens to Kanye despite his association with President Trump, while Simon argues that if we were only allowed to listen to music by unquestionably nice people, the store would have to destroy all but a handful of albums by the likes of Bono, Phil Collins, Michael Stipe, and Sufjan Stevens. In the end, Simon wins and gets to sell the record. The whole scene — particularly the digression about the genius of Quincy Jones’ Off the Wall horn charts — is among the series’ most delightful in its music nerdery.

Kravitz is phenomenal throughout, and it’s hard to imagine a better choice to play a gender-flipped Rob. That said, if you know the movie, it’s more than a little weird to see the scenes (which begin here and extend to later in the season) where this Rob flirts with Liam (Thomas Doherty), a hot young musician who later visits the store. That’s because Liam is himself a gender-flipped version of Marie De Salle, whom Rob briefly falls for in the movie after seeing her perform a cover of Peter Frampton’s “Baby, I Love Your Way.” (In the show, it’s a Boyz II Men cover.) Why is it weird? Because Marie was played by Kravitz’s mother, Lisa Bonet, which… yeah. Moving on! 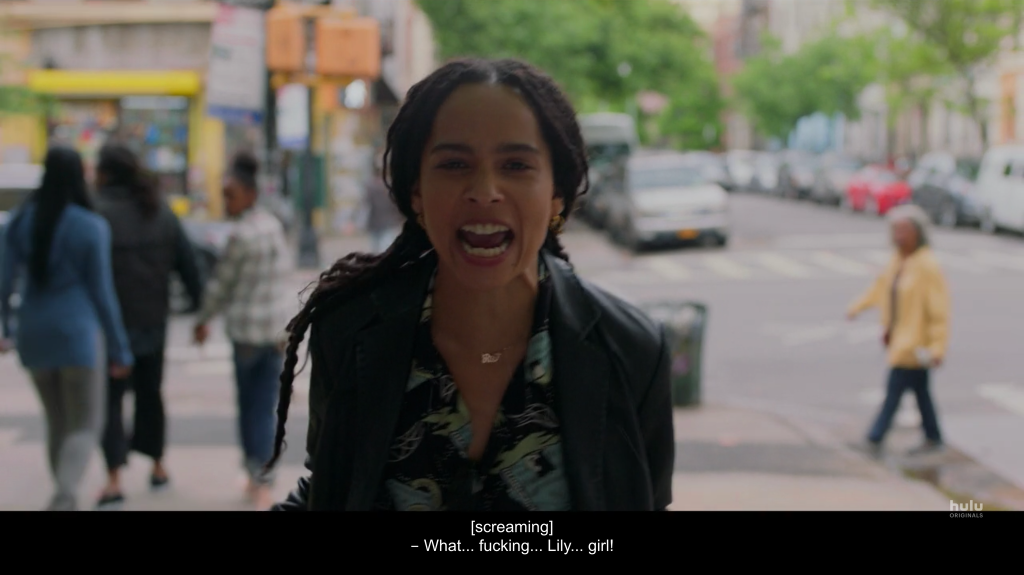 Cusack’s old buddy Tim Robbins appears in the film as Ian “Ray” Raymond, the ponytailed, patchouli-smelling new boyfriend of Rob’s most recent (and most important) ex, Laura, whose visit to the store inspires several funny revenge fantasies. In the show, Rob is long since broken up with fiancée Mac (Kingsley Ben-Adir), but is nonetheless thunderstruck to learn he is dating a woman named Lily (Dana Drori). Lily is portrayed much more sympathetically than Ray, but she nonetheless inspires several rants from Rob that, names aside, are word-for-word how her male counterparts spoke of Ray.

From the Boss to Blondie (Episode 3)

Again, the various Robs share a lot of the same musical obsessions, but they are not the same people. When movie Rob is feeling particularly in need of romantic guidance, he imagines Bruce Springsteen is in his apartment with words of Boss-like wisdom. For TV Rob, it’s a Seventies icon who speaks more directly to her: Debbie Harry, who clinks glasses with Rob as they listen to a cover of Blondie’s “Heart of Glass.”

Kat is at least as awful as Charlie (Episode 4) 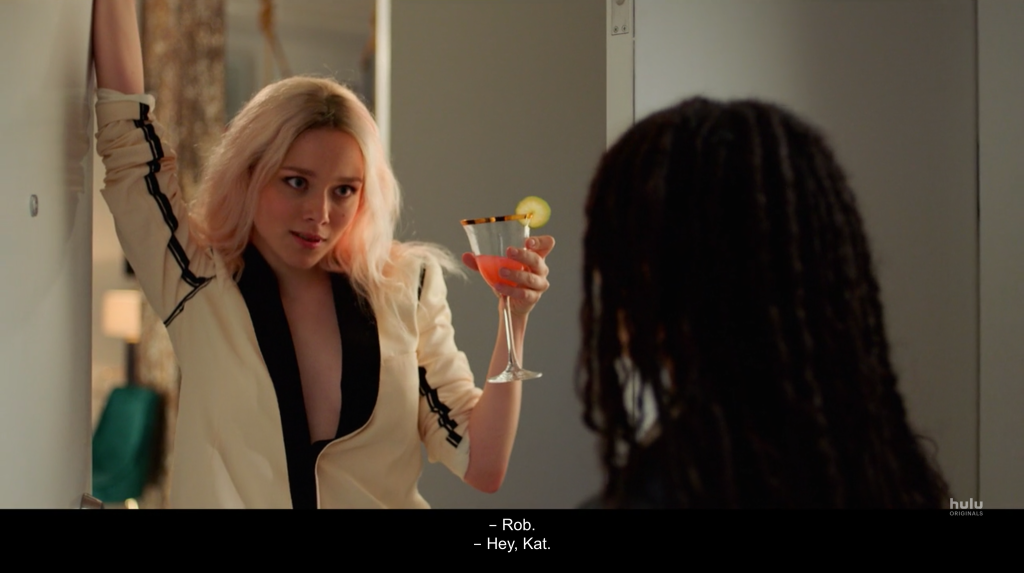 Catherine Zeta-Jones has a memorable cameo in the movie as Charlie, whose break-up with Rob did a particularly big number on him, resulting in the ugliest encounter when he decides to revisit his top five exes. The TV show turns Charlie into Kat (Ivanna Sakhno), who is just as terrible, but in a very current way: She’s an Instagram influencer, hosting a party among a group of equally shallow, Insta-famous people she doesn’t know IRL.

Rob gets an offer she can refuse (Episode 5) 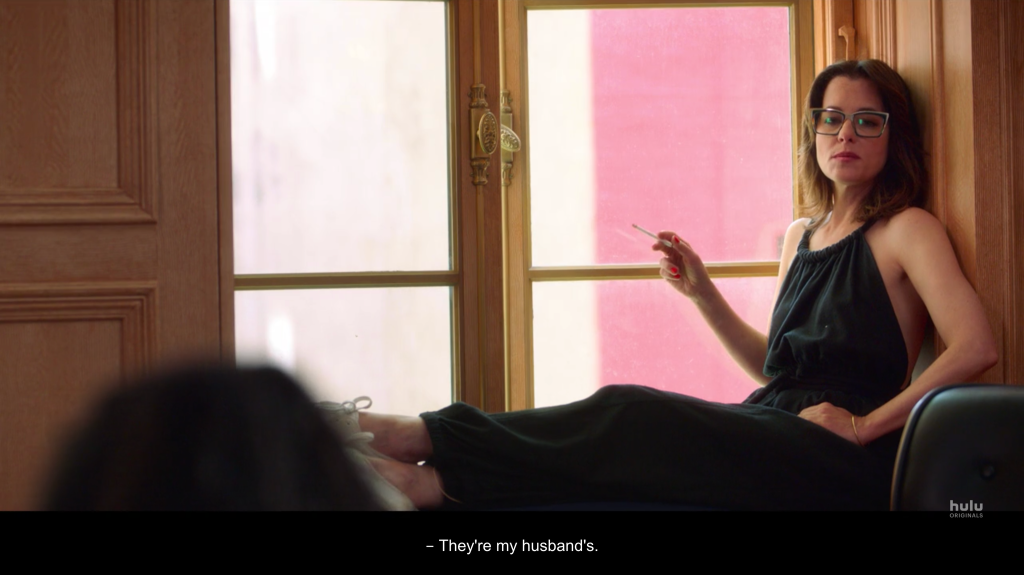 One of the book’s most memorable scenes was filmed for the movie, then cut, probably because it doesn’t have anything to do with Rob’s relationship troubles — even if it offers a lot of insight into both his love of music and his affinity for men like himself who make stupid romantic choices. In it, a vengeful wife (Beverly D’Angelo in the movie’s deleted scene) offers to sell Rob her cheating husband’s priceless record collection for a pittance, but he ultimately can’t bring himself to buy it. The show not only revives the scene, but makes it the subject of a full episode, with Parker Posey as the wife — here a wealthy, eccentric artist — and Rob’s on-again, off-again love interest Clyde (Jake Lacey) along for the ride as she struggles with what to do. Like the extended scenes at the record store, the episode is a reminder of the time advantage a TV adaptation can have over a movie version. 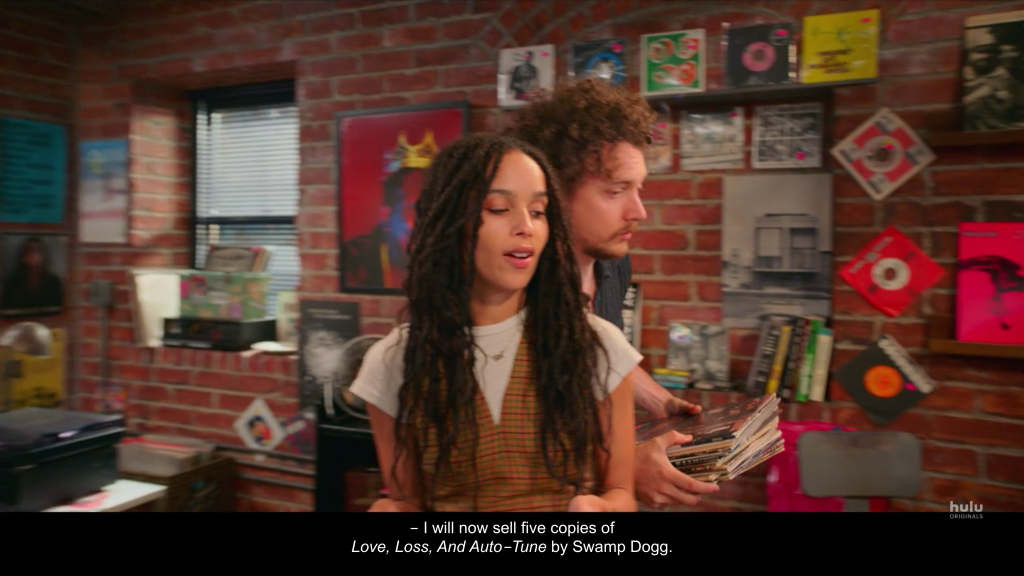 On a busy day at the movie’s store, Rob confidently tells Dick, “I will now sell five copies of The Three E.P.’s by The Beta Band.” The song he plays, “Dry the Rain,” serves as the theme music for the show’s seventh episode, but TV Rob declares that she will sell five copies of Love, Loss, and Auto-Tune by Swamp Dogg. (In the same scene, Cherise, like Barry before her, gets to shame a customer for not owning classic albums like Blonde on Blonde.) 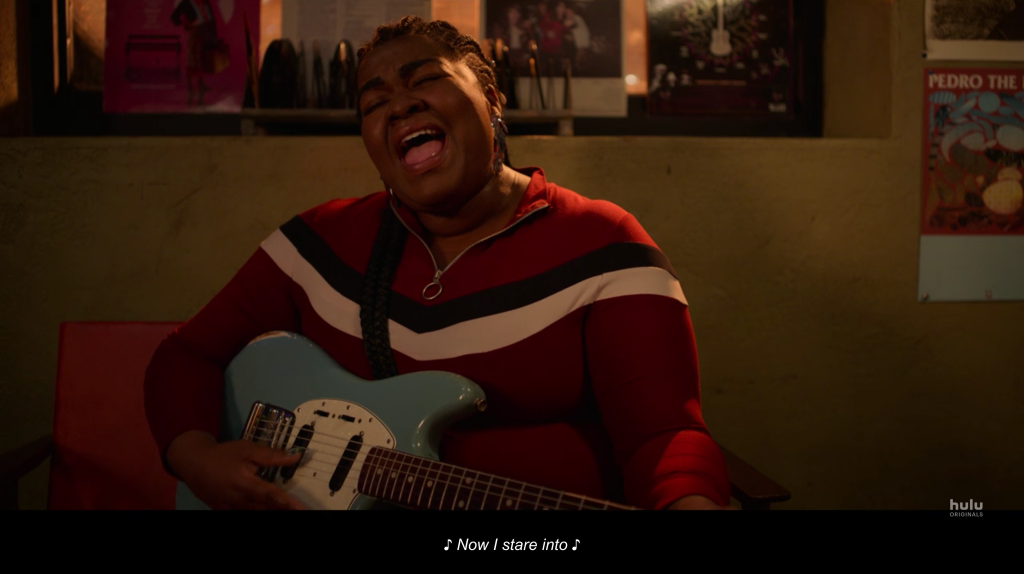 “Dry the Rain” is one of several cuts from the movie soundtrack that are repeated on the show. (Simon, for instance, blasts a Stiff Little Fingers album in the sixth episode, calling back to when Dick teaches a woman he likes that the band was a huge influence on Green Day.) The movie ends with Rob playing Stevie Wonder’s “I Believe (When I Fall In Love)” as a nod to the earlier “I Just Called To Say I Love You” scene, but also as a sign of how he’s maturing as a person and as a boyfriend. The TV Rob has to grow up in different ways, so “I Believe” is used differently here: first as the intro music to the finale, then as a song Cherise sings to herself as she attempts to realize her own musical dreams. (If there’s a second season, we’ll hopefully get the Cherise version of Barry singing “Let’s Get It On.”)