Some pretty iconic comic book characters originated far away from the comic book page. Superman’s pal Jimmy Olsen and his editor Perry White both first appeared in the Adventures of Superman radio show. Wolverine’s clone/adopted daughter X-23 debuted as part of the X-Men: Evolution cartoon series. Phil Coulson became such a ubiquitous part of the early Marvel films (and then the lead on Agents of S.H.I.E.L.D.) that he’s now similarly ingrained in the Marvel comic book universe.

And, of course, there is Harley Quinn, who has made her way from a cartoon to the comics to live action, and back again to the world of animation.

The Joker’s jester-themed sidekick/lover was first introduced in the classic Batman: The Animated Series, where she was voiced by Arleen Sorkin. Harley proved so beloved that she was soon added to the main comic book canon, and eventually became one of the main characters of the Suicide Squad film (and the upcoming Birds of Prey), played by Margot Robbie. Now, Harley has come full circle, as the star of a new — and extremely adult — self-titled cartoon series, debuting November 29th on the DC Universe streaming service.

'The Batman': Gritty New Trailer Showcases Catwoman and the Penguin

In this version, written by Justin Halpern(*) and Patrick Schumacker, Harley (Kaley Cuoco) finally recognizes that her relationship with Joker (Alan Tudyk) is entirely one-sided and damaging to her. With the encouragement of best friend Poison Ivy (Lake Bell), she dumps Joker and sets out to prove her own supervillain bona fides, both to heroes like Batman (Diedrich Bader) and Superman (James Wolk) and more established bad guys like Lex Luthor (Giancarlo Esposito), Scarecrow (Rahul Kohli), and Bane (James Adomian).

(*) Full disclosure: While I found the show very funny on its own merits, Halpern and I are friends.

Some characters are more or less as you’d expect based on the comics (Bader plays Batman far more straight than he did in The Brave and the Bold cartoon), while others feel very new, like Gotham City police commissioner Jim Gordon (Chris Meloni) being a PTSD-afflicted wreck. Cuoco’s Harley has elements of both the Sorkin and Robbie versions, but is largely her own irrepressible take, with a mouth like a sailor. (In the Batcave, she tells Batman, “This must be where you fuck the bats.”)

The idea of Harley having to establish an identity separate from the Joker was a core part of their plan from the beginning. “We saw this headline that said, ‘Wife of Chicago Bears offensive lineman wins gold medal,'” Halpern recalls. “This woman wins a gold medal in the Olympics and she doesn’t even get her name in the headline! That, to us, felt like such a ripe idea to mine for a character who absolutely would have that happen to her, because she’s the Joker’s girlfriend. It’s really hard, even if you break up with someone who is that big a personality, to carve out your own thing. And it’s also hard to figure out what the fuck you want for your life.”

From there, it occurred to Schumacker (a lifelong comics obsessive who has an X-Men logo tattoo) that “there is a glass ceiling for female supervillains, and we fortunately had a lot of female writers on staff who could tell us what not to say.” Those writers pointed out, for instance, that almost no female villains have their own crews, which leads to a story arc where Harley has to recruit a bunch of down-on-their-luck fellow villains — including Doctor Psycho (Tony Hale), Clayface (Tudyk again), and King Shark (Ron Funches) — to work as her goons.

“At one point in the show,” says Schumacker, “someone says that if you’re a male supervillain and you rob a bank, you’re a criminal mastermind. If you’re a woman, and do the same thing, you’re a crazy bitch.”

The entire creative team — including supervising producer Jennifer Coyle and character designer Shane Glines, both of them protégés of Batman: The Animated Series producer Bruce Timm — were conscious of not making Harley and her best friend into objects for the male gaze.

That Halpern and Schumacker can use Joker, Batman, Superman, et. al. is a big shift from their previous DC project, Powerless, an NBC workplace comedy set in the DC Universe. On Powerless, there was so much concern about stepping on the toes of Arrow and its spin-offs, and/or the DC films, that the writers were extremely limited in what characters they could and couldn’t reference, even obliquely. “We couldn’t show Batman’s hand!” Halpern recalls. Instead, they were given a list of acceptable heroes and villains to use, almost all of them D-listers from a team called the Global Guardians that even Schumacker had only vaguely heard of before. (“Do you remember that scene in The Simpsons where Hank Scorpio gives Homer a football team as a thank-you gift,” says Halpern, “and Homer’s disappointed because it’s the Denver Broncos? That was us with the Global Guardians.”) But the TV-MA content of Harley Quinn inspired everyone to treat the show as taking place in its own universe, which allowed the writers not only to use DC’s biggest guns, but to present their own takes on them: Batman as a humorless killjoy, Superman as a corny boy scout who tells dad jokes, Clayface as an insufferable failed actor, and Bane, as Halpern puts it, “as the Never Trump Republican — the guy that both sides don’t like and gets picked on all the time.” 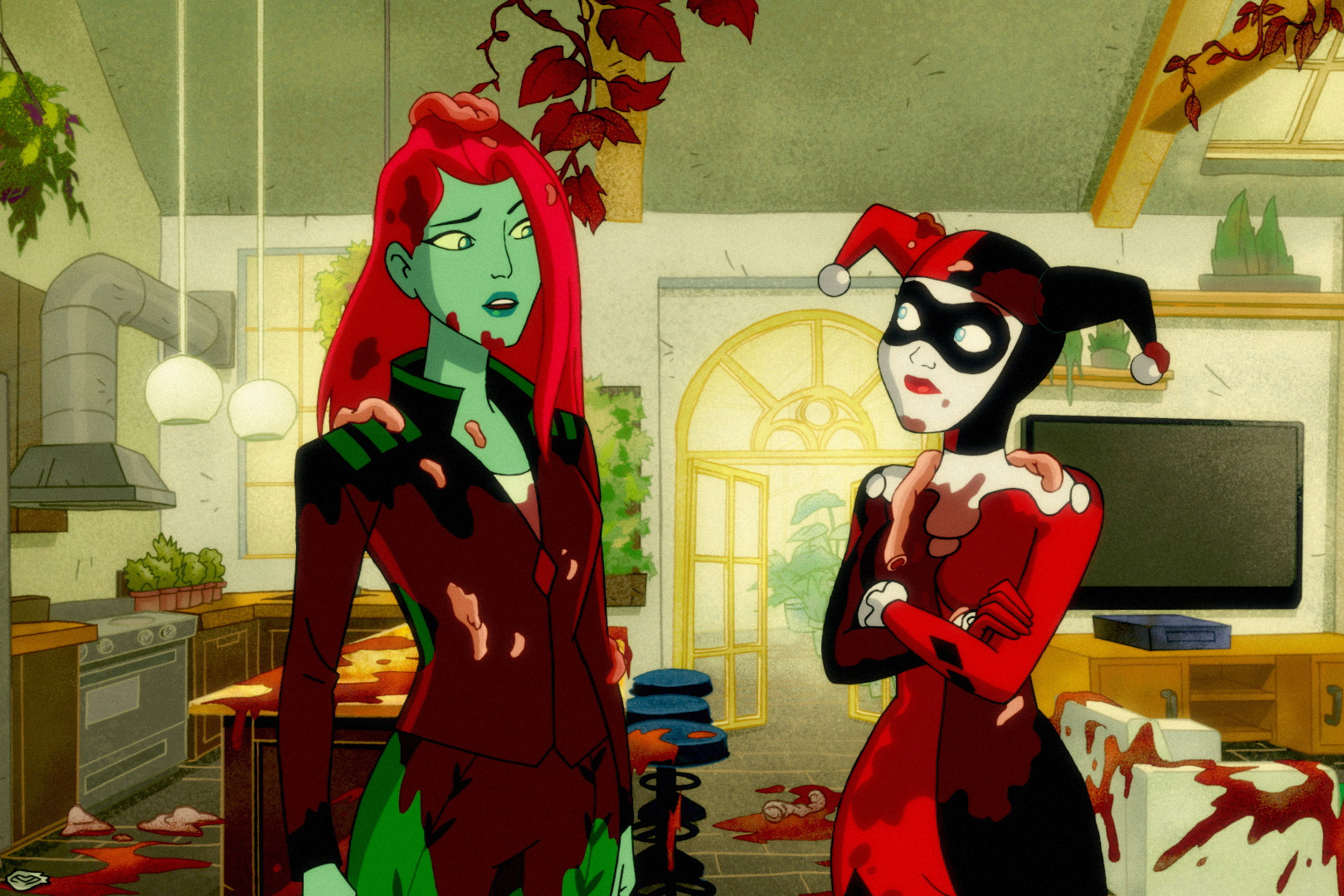 “We always pitched the show as being from the POV of Harley Quinn,” says Schumacker. “So the representation of Gotham City was never going to be doom and gloom and gothic and grayscale and all of that. It was going to be colorful and bright and a playground, because that’s what Harley would view it as. There was a Grant Morrison quote about why does Gotham City have to be so dour? We read that, and said, ‘Yeah, he’s onto something.'”

For the most part, DC went along with whatever ridiculous or profane ideas the creative team had for these iconic characters. A lot of discussion, though, was required before the powers-that-be approved their take on Commissioner Gordon, who’s barely hanging on because, as Schumacker puts it, “he spends every day of his life living the film Seven.”

“DC naturally wants to portray their heroes as heroic,” Schumacker acknowledges, “and Gordon is a hero. He has no real superpowers. His superpower is dogged determination and an incorruptibility. We were like, ‘We have that with other characters, but also, we know Chris Meloni can knock this out of the park if he plays an unhinged, alcoholic Gordon.’ So credit to DC [for] letting us prove ourselves. It was a conversation. It got to the point where were were just begging them, ‘Please, let us try it, and if you hate it, we won’t do it.’ There was enough of a consensus that it did weirdly work for them.”

Warner Bros. executive Susan Rovner had first pitched Halpern and Schumacker on the cartoon being R-rated. But even with that mandate, the writers found themselves pushing the boundaries of DC and Warner’s willingness to be good sports.

“We have a thing in the second episode where Harley ends up at Penguin’s nephew’s bar mitzvah,” says Halpern. “There’s a whole plot point that hinges on her talking about finger-banging, and every time, they would very nicely give the note, ‘We’re not sure about the finger-banging part.’ We would promise, ‘It’s character-based, and it’ll play. This isn’t a suicide mission. We don’t want people to hate it.'” (The line stayed.)

The actors were given freedom to riff (many of Bane’s funniest lines were improvised by James Adomian), though that wound up pushing the content even further: “When you get Lake Bell in the booth, she adds a lot of ‘fucks,'” says Halpern. But Bell’s performance also led to a much more buttoned-up and reasonable take on Ivy, who’s usually a hugely eccentric character in her own right. (As Schumacker puts it, in this show, “Harley is Ferris Bueller and Ivy is Cameron.”)

“We knew going in that Harley was so manic with her energy, if we also played Poison Ivy that way, it would have felt like overkill,” says Halpern. “Lake’s take was of this Daria-ish character who’s just over it but has a lot of anxiety herself. It’s a credit to Lake. We looked at Lake’s performance and worked from there, because she’s so gifted.”

Halpern and Schumacker first began developing Harley Quinn in 2016, but then had to shelve it when Warner Bros. asked them to take over for the original creator of Powerless. This led to some brief concern when, in the spring of 2017, Marvel and FX announced an adult-oriented Deadpool animated series from Donald and Stephen Glover, which Halpern and Schumacker feared would feature the same anarchic, disrespectful attitude towards traditional superheroics that they were going for. Oh, and would be written by the guys who make Atlanta.

“When we first got the call, the Deadpool cartoon didn’t exist,” recalls Halpern. “So when it got announced while we were delayed, we went, ‘Ah, shit! And it’s going to be done by Donald Glover, so it’s going to be good.’ And it just never comes out.” (Marvel pulled the plug on the cartoon over creative differences with an extremely displeased Glover.)

If the series lasts long enough, Schumacker says, “I’m dead serious that I want to see Harley become a parent. I don’t know if that’ll ever happen, but there’s a lot of rich territory to mine, and it feels fresh to me, because I haven’t seen a story done with a pregnant supervillain attempting to raise a child into respectable adulthood.”

Regardless of how many seasons it runs, the creators have no illusions that their take on Harley will ever eclipse the beloved show that first introduced her.

“I look at Harley Quinn, the series, as the younger, immature, hyperactive, sibling of Batman: The Animated Series,” says Schumacker. “She’s a little envious of her older brother, who everyone puts on a pedestal because he did everything right. She’s the baby of the family and thinks the film noir self-seriousness of The Animated Series can fuck off.”