In the closing moments of GLOW‘s third season, Britney Young’s Carmen announces plans to leave the show-within-the-show because, she says, “I want to wrestle, and I can’t do that here anymore.”

Carmen’s in a unique position among the Netflix dramedy’s main characters. Almost everyone else fell into wrestling by accident, or for lack of a better option, where Carmen grew up in the wrestling world and loves it for its own sake. Even money man Bash (Chris Lowell), while a wrestling fan, has diversified his interests by this point in the series, and looks at GLOW as one small part of his larger showbiz empire. So it makes sense that Carmen, of all the regulars, would be most apt to make a meta comment about how little wrestling there is in this season of a show about wrestling.

Over the course of a 10-episode season, only three episodes feature any significant action inside the squared circle: the premiere (“Up, Up, Up”), which establishes how the former cable-access show translates into a Las Vegas casino revue; the fifth episode (“Freaky Tuesday”), where all the women swap characters for the night; and the finale (“A Very GLOW Christmas”), in which Carmen convinces Ruth (Alison Brie) to perform a version of A Christmas Carol where Ruth’s wrestling alter ego Zoya the Destroya is Scrooge.

In several ways, it makes a lot of sense that Season Three largely back-burners the wrestling. Doing GLOW as a stage show for tourists means that it will be the same thing every night, and there’s no point dramatizing that except on occasions like “Freaky Tuesday,” where things go differently. (And it turns out that Betty Gilpin can do a terrible Russian accent almost as amusing as Brie’s.) And by the end of Season Two, GLOW had arguably pushed the wrestling angle as hard as it could. Not only had all of the actresses become technically skilled in the ring, but that season devoted an entire, marvelously silly episode to showing us an installment of the Bash-produced show from beginning to end.

Perhaps most importantly, the wrestling sequences take up a lot of real estate on a show with a big ensemble — an ensemble that it was clearly determined to service more thoroughly this year than in the past. By acknowledging early on that the Vegas show would be the same from night to night, Season Three gave itself more room (*) to dig deeper into nearly every character. (The two hairdressers were still mostly comic relief, but even they played a more dramatic role as Sunita Mani’s Arthie anxiously took a step out of the closet.)

(*) As a streaming show without commercials or time slots, GLOW can technically be any length it wants, and nearly every episode this year was 30-plus minutes, with several clocking in near or even over 40. But that’s also pushing the outer limits of what tends to work in a TV comedy episode — even for a series meant to be binged — so something had to go. In this case, it was the wrestling.

Like Ruth and Debbie, GLOW itself has always looked on the wrestling as a means to an end. For the show, it was the chance to explore the ambitions and bonds among a group of misfits at a very tacky moment in our pop cultural history. Having long since established how the wrestling works, Season Three looked more at what made everybody tick.

There was also good material for Sheila the She-Wolf (Gayle Rankin) and Tammé (Kia Stevens) as they opted to make like Ruth and get serious about acting; for Debbie as she asserted herself as a producer and fell into a brief romance with older businessman Tex (Halt and Catch Fire‘s always-charming Toby Huss); for the awkward romance between Arthie and Yolanda (Shakira Barrera), who had no interest in hiding her own identity; for GLOW director Sam (Marc Maron) to make peace with the fact that daughter Justine (Britt Baron) was a better writer than him; and for Cherry (Sydelle Noel) to debate whether to sacrifice her career to have a baby with husband Keith (Bashir Salahuddin). Nothing revolutionary, but all the stories were effectively told. The season also did a nice job with its two major new additions: Geena Davis as the former showgirl who owns the casino, and Kevin Cahoon as Bobby, a drag queen who becomes close with Sheila. 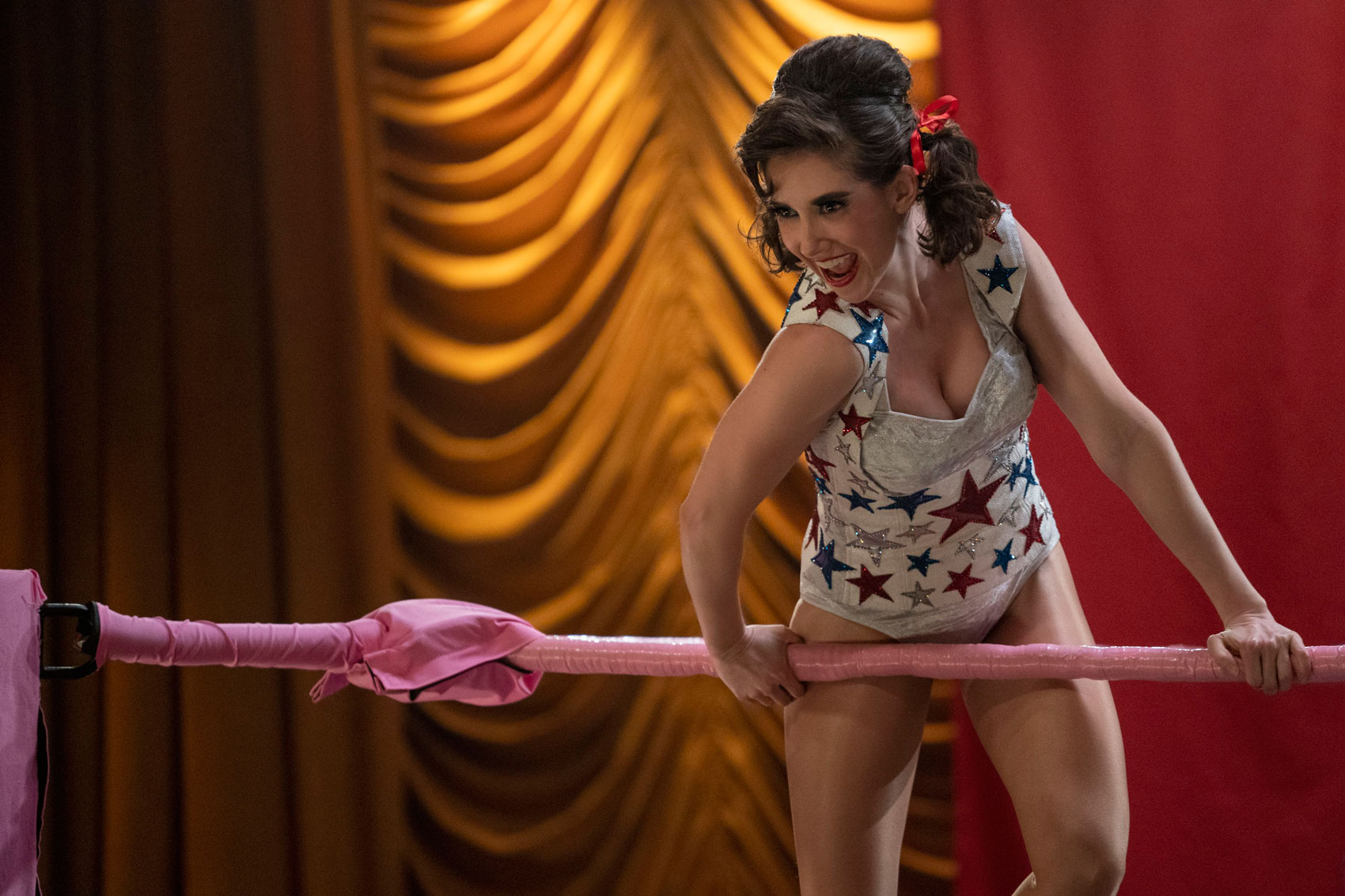 The monotonous, backgrounded nature of the wrestling fit into the season’s themes. Vegas offered both GLOW and its performers a chance to reinvent themselves. Nearly all took it, and discovered new facets of their work and/or personal lives. The only exceptions: Carmen, who just wanted to wrestle; and Ruth, who found herself plateauing while all her friends were blossoming. (Even Sam couldn’t cast her in the studio movie he was making, because screenwriter Justine objected, and Sam chose his daughter over his would-be girlfriend.)

So in terms of plot, character, and theme, it made sense that we didn’t spend much time watching Zoya, Liberty Belle, Machu Picchu, and the rest of the women’s wrestling characters. But I have to admit that by the time Carmen voiced her objections to Ruth and Debbie, I’d started to agree with her.

While the Vegas setting hemmed in the creative team regarding how much the show-within-the-show could change each time we saw it, it’s also not coincidental that “Freaky Tuesday” and “A Very GLOW Christmas” were among the season’s most effective episodes for both laughs and character development. GLOW just feels livelier, and truer to itself, when we’re spending at least a few minutes each episode on the work that’s brought these misfits together. And in seasons past, the show deftly used the wrestling not only to provide narrative structure, but to help advance character arcs. There was some of that in Season Three — Jackie Tohn’s Melrose does a racist Asian accent while swapping roles with Ellen Wong’s Jenny in “Freaky Tuesday,” kicking off a very potent storyline for two of the show’s back-benchers — but not as much as there could have been. It’s a big deal late in the season, for instance, when Sheila encounters a real wolf during a desert camping trip and, realizing that she’s been faking it all these years, ashamedly burns her wig and other bits of lupine cosplay. But the only time afterward that we see her in the ring, it’s for the Christmas Carol spoof, which means we have no idea what kind of character she winds up playing the rest of the time — or whether she feels enough of an actress now to separate the She-Wolf from Sheila and use the former for work purposes.

GLOW doesn’t always need wrestling to move things along and hit important emotional beats. The season’s penultimate episode (“The Libertines”) takes place at an AIDS benefit cabaret that Bobby invites the women to, and those performances effectively take on the role the wrestling scenes so often play in underlining story and character and theme. (It’s at the cabaret, for instance, that Sheila gets major validation for her acting, while Arthie is inspired to embrace her truth after homophobes vandalize the event.) But some kind of performance is helpful, and Season Three could have used some similar substitutions throughout.

The season ends with Debbie having helped Bash buy a local TV network out from under Tex, with the plan to revive GLOW as a television property (with new characters, because their old station owns the rights to Zoya, et. al), and with Ruth replacing Sam as director. But Carmen has already split for other opportunities, and Ruth doesn’t want to give up her acting dream, even if, as Debbie bluntly puts it, it would have happened for her by now if it was going to.

It’s a promising set-up for a potential fourth season, but fourth seasons on Netflix are becoming an increasingly rare proposition. The streaming giant has apparently embraced the idea that it can cancel shows, and that its subscribers would rather start something new after a few seasons. (Never mind that long-running shows like The Office and Friends are apparently among the most popular titles in the entire Netflix library.) It wouldn’t surprise me if there’s a fourth season of GLOW, but nor would it shock me to see it join the recent ranks of Tuca & Bertie and The OA, among many others, to get a shorter-than-planned run.

This was still a fine season of TV, and the best showcase yet for many members of the cast. And if GLOW manages to break the recent cancellation trend and come back for a season where Debbie and Bash are mounting a new wrestling TV show, then we can look on Season Three as an admirable and mostly successful experiment. But if the last we see of these characters is Debbie and Ruth’s awkward airport goodbye, then among the disappointments will be the fact that GLOW‘s unplanned farewell season mostly sidestepped the arena where so many of its memorable moments once took place.