The Umbrella Academy reads like a catharsis. Almost 12 years ago, Gerard Way released the Dark Horse comic at the peak of My Chemical Romance’s powers. Through six issues, Way channeled the growing dysfunction and discord of his real-life band into the fictional story of seven adopted children with superpowers struggling under the weight of an oppressive upbringing by their newly deceased father. It was classic X-Men archetypes, doused in kerosene and viewed through a psychedelic prism.

Surreal, kinetic and personal, The Umbrella Academy: Apocalypse Suite was filled with murderous children, talking chimps and world-ending violin solos but, at its core, the comic was about the ways family can irrevocably damage each other, and how we move past that pain. “We [My Chemical Romance] were in a big pressure cooker of fame and notoriety and the characters experience that in the comic and the show,” Way explains of his creation.

After years spent in development hell and movie limbo, The Umbrella Academy finally found a home on Netflix. Now, its ultimate challenge is showing the humanity behind main characters with alien gorilla bodies (Spaceboy) and time assassin teenagers (Number Five). Over the phone, Way describes the creation of the comic, how his music life informed the story and how fatherhood is changing his writing.

Where did the idea for the Umbrella Academy comic first originate?
The philosophy that I apply to all the art I make is that you should make something that you would want to read or listen to or see, something that you feel doesn’t exist in the specific way you see it in your head, something that can only be told through your lens. In comics, I didn’t see anything like The Umbrella Academy. I saw a lot of things that were beholden to continuity that had been going on for 50 years and stories that have continued that long, but I didn’t see anything that threw the reader in the deep end and just got them into the good stuff right away.

What are comics that you grew up with that were your bibles?
The first comic that I remember being hooked into and buying on my own at the shop was Chris Claremont and Marc Silvestri’s X-Men. That has like a big influence on what I do with Umbrella Academy. The way that they were telling the story, you would jump around to the different characters through a series of vignettes and you get these little slices of their life that eventually all came together. That’s kind of what I do in Umbrella Academy.

Watchmen did have a huge impact on me, and there’s obviously some elements of Umbrella that are inspired by it. Dark Knight Returns was a big one, Daredevil: Born Again was a big one. Then I discovered Grant Morrison’s work in Doom Patrol and that became my mixtape of weird, awesome stuff.

Umbrella Academy before it became a TV show it was supposed to be a movie at Universal. Was that process weird or emotionally hard?
Yeah, that was emotionally hard and it was really time-consuming and draining. I had been more involved in that than I probably should have been. I was involved in a lot of early conversations. As it continued I remember just going in there and having meetings about it. It wasn’t going anywhere. I don’t think whoever was the head at the time believed in it. It was emotionally draining. So after that, I made a decision when I made more comics I’d make sure the comics were my main focus and that anything else that happens around it I need to be able to relinquish that control and let it exist in a different medium.

How did it go from being a movie to ending up at Netflix as a TV show?
Universal had that option for a film for a long time and then eventually they finally told us that they weren’t going to make it. The option ran out and then Dark Horse contacted me and said, “Well, you know, TV is really starting to get pretty crazy. What do you think about Umbrella as a TV show?” I said, “I think that’s great, because I would love to spend more time with these characters.” Cause Umbrella Academy as a comic book moves very quickly. That first graphic novel, that could’ve easily been 12 issues, but we kept it really lean.

Anyway, so they said, “Hey, we’d like you to meet with UCP [Universal Cable Productions], there’s a production company. They’re developing a lot of TV,” so like all different networks. I sat down with Dawn [Olmstead, President of UCP] and I really like her and the people she worked with and they’re really artist friendly. Dawn asked me what my goal was and I said, “My goal is to make a really amazing comic. I’ve kind of done the Hollywood thing. I’ve been through that machine. If I make a really good work then you’ll always have material to make shows with.” I ended up being a little more involved with that as a co-executive producer, but I definitely, in the beginning, I was aware that it was going to be different than my comic. 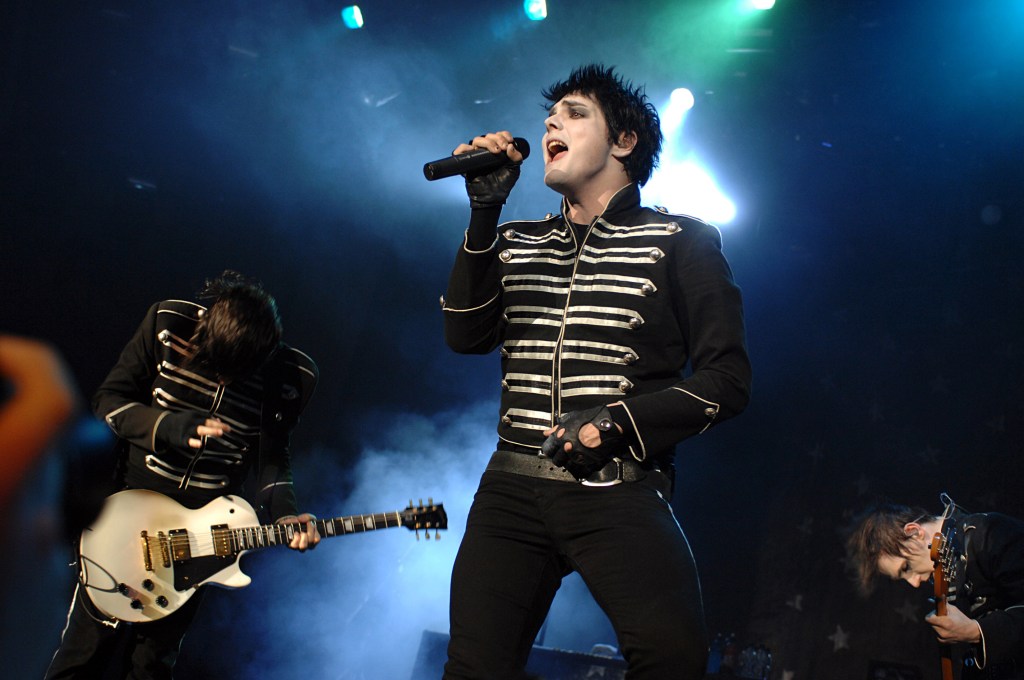 Re-reading [Umbrella Academy], it’s such a story about parenting, fatherhood and your family irrevocably changing you. What were you going through during the time you were writing those early comics?
Being in a band is like being in a dysfunctional family and all these personalities are really distinct and really big, not just the people in your band, but the people you meet on the road or the crew that you work with and all this stuff. A band especially is a dysfunctional family, so there’s little bits of me in all the characters, there’s bits of some of the guys in some of those characters and the different roles that we would play in the band and how those roles would change sometimes. We were in a big pressure cooker of fame and notoriety and the characters experience that in the comic and the show.

The kids in the family are different races, you have Mary J. Blige [playing Cha-Cha]. What was the thought process behind the show’s diversity?
Those were very early conversations that we all wanted there to be diversity in the casting and representation. We really wanted that, and it’s one of the ways that really improved upon the source material. The real source material is not very diverse, but that was very early conversations between Dark Horse and I, Jeremy Slater and I, who is the original showrunner, and he wrote the original pilot. He wanted a lot of diversity. UCP wanted it and then, when we talked to Netflix they wanted it, and it’s the perfect situation for that diversity, because they’re all adopted.

The Umbrella Academy is finally getting a show the same year that The Doom Patrol is getting one. What do you think it is about both those comics that make them good entertainment for 2019? Is the public is ready for those more left-leaning superheroes?
The time is now for those kinds of things, because they want something different, because they need something different. They spent the last ten years watching origin stories. I think the public needs something that treats them intelligently and throws them in the deep end. Weird is different. Weird is fresh and new. They’re ready for things that go deeper. We don’t have to just deal with the fact that some of these people are god-like sometimes.

What about your writing has changed? There was that break. It’s the same comic, but it seems like you’ve grown as a creator in your style.
When I sit and think about the experiences that I’ve had since that second volume, there’s been quite a bit. There was a band breaking up and dissolving. One of the best things was getting to raise my daughter and be around her a lot and not have to tour. So fatherhood, parenthood became a much bigger role in my life. I accumulated wisdom. I learned to let go of my ego. I gained some humility. I learned to shut up and start listening. I got much better at all those things.