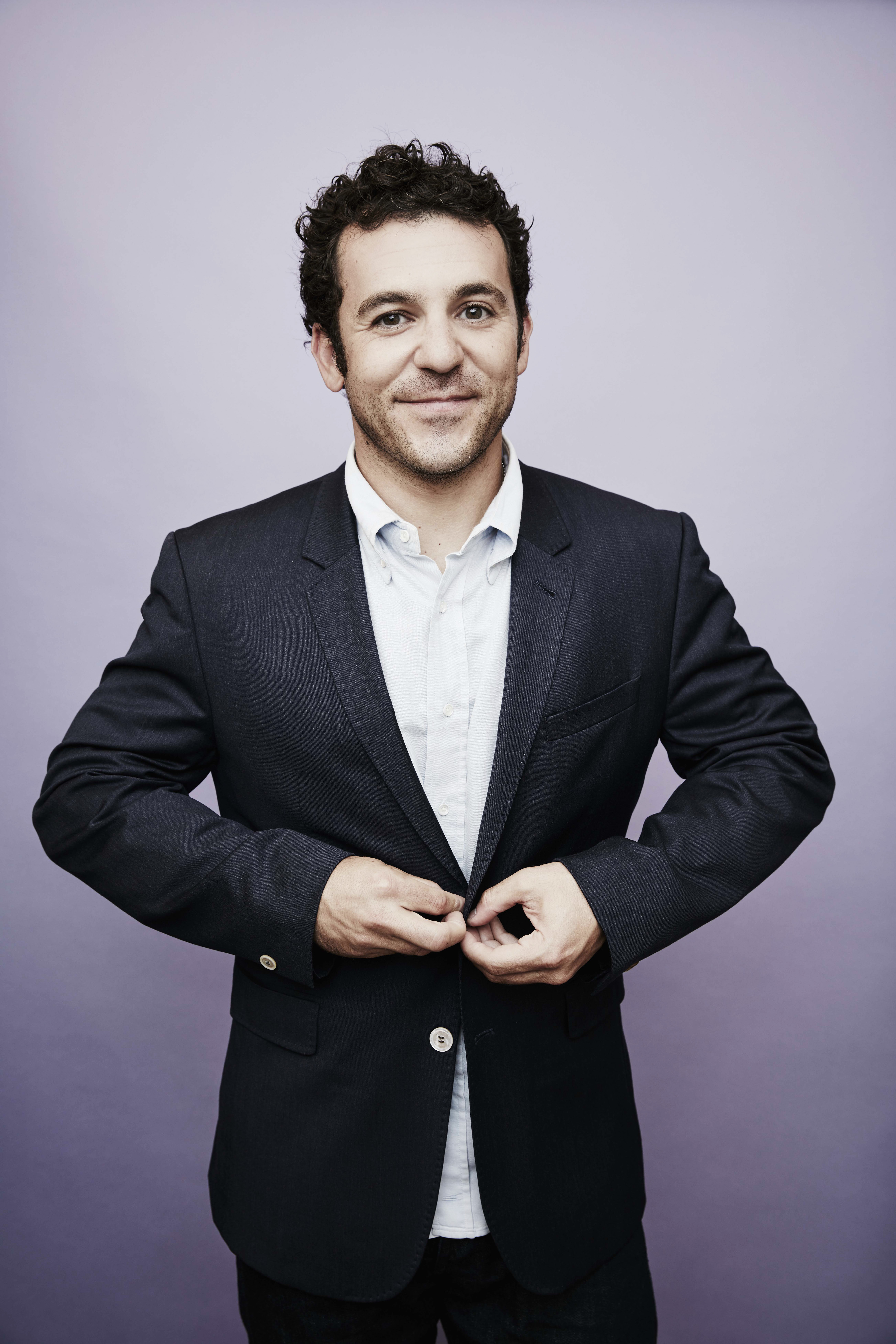 As the chipmunk-cheeked star of The Wonder Years, Fred Savage grew up Truman Show-style: That Joe Cocker-ized kiss with Winnie was his first, too. In 1993, after the series ended, he eschewed a child-actor meltdown in favor of majoring in English at Stanford. But for the past decade, Savage, now 39, has been on the other side of the camera, directing and producing for the likes of It’s Always Sunny in Philadelphia and Party Down. So he’s as surprised as anyone to find himself the co-star, opposite Rob Lowe, in Fox’s new sitcom The Grinder — the producers recruited him after watching other actors get “trampled” by Lowe’s presence. “I didn’t think I missed acting,” says Savage. “But once I started to make people laugh, I enjoyed it.”

Look Back in Wonder: An Oral History of 'The Wonder Years'

I watched you direct an episode of The Michael J. Fox Show a couple of years ago, and you seemed totally comfortable and happy behind the camera.
I definitely think that any comfort I have on set, in any capacity, is all smoke and mirrors — but I’m glad you thought that way. I’ve been able to, over the last decade, really build a career – one that I’ve always wanted in television, as a comedy director. I was comfortable on set, I loved the work but this [Grinder] script came along. And Nick Stoller, who is an executive producer on the pilot, said to me, “Did you like it?” “Yeah, it looks great. I would love to shoot it. Let’s talk about it.” And he says “No, this is for acting.” I was like, “Oh yeah, no thank you. That’s not anything I’m interested in doing.”

And he was just like “Oh come on, just come meet everybody and…” Our families were friends, Nick’s and mine, and I didn’t want it to be awkward when we saw each other. “Fine. I’ll come meet everybody.” I can’t tell you how many career decisions I’ve made just based on avoiding awkward encounters down the line. It’s a powerful motivator!

What did you specifically like about this role?
I think Stewart’s kind of the center of the show, or at least the entry point, because he just kind of calls bullshit on everything. The premise of the show is: A guy whose brother is this huge superstar, who comes home to practice law, even though he’s not a lawyer. Now that’s not the most relatable concept in the world, but what’s relatable is this idea of feeling like you’re the only person who sees clearly when everyone else is kind of crazy. Everyone else is just bowing at the altar of Rob’s character, and I’m just like, “You’ve got to be kidding me, this is the most insane thing I’ve ever seen.” That attitude really spoke to me.

You haven’t starred on a show since the short-lived Crumbs, in 2006. Did something drive you away from acting?
Going to directing wasn’t a reaction away from acting as much as it was a move towards something I always wanted to do. Ever since I was a kid, I was interested in the camera and how it worked and why one director would place it in this part of the room and then another would place it in that part of the room. So I threw myself into it, and that really started to get momentum. Really anyone in the business who transitions into directing as a writer or editor or an actor or a cinematographer, at some point you have to kind of take a leap and say, I’m committed to this.

After your childhood, was part of it about leaving fame behind?
I was never really aware of being famous. Being in a magazine or on a billboard – that really didn’t register to me at all when I was younger. People would come up to me and recognize me, but I was very fortunate in that people were always so warm. I think their relationship to me or the work that I’d done is very familial. And so whenever people would come up to me, they were always very excited and encouraging; they loved the work I did and were so interested to hear what I was going to do next.  But, honestly, we’re shooting The Grinder at the Fox lot, and they put up a poster of it — and it’s huge! I literally was out in front of the lot taking pictures of it because it was such a kick.  But I can’t say it’s anything I missed because it wasn’t really a part of my experience in a real way.

Do you think that’s how you avoided the stereotypical child star crash that seems to happen like, 79 percent of the time?
I would challenge that statistic. I think it would be, like, two percent — or maybe one. But I do think those who do kind of make a turn are very spectacular and people love writing about it. It just always breaks my heart. I don’t think that being an actor or being a performer at a young age leads to failures as an adult. There’s a lot more success stories than I think people recognize.

But to your point, I had a life outside of entertainment so when [The Wonder Years] ended when I was a kid, my life didn’t end. I had great family supporting me and I think that’s true whether you’re a child actor or someone who plays little league. If you don’t have a supportive family behind you, it’s hard to be successful as an adult in any situation.

“I have friends who work on shows take place in the Nineties. I’m like, “Well, that doesn’t seem that long ago.” Except 1968 was 20 years before 1988, and shit, that feels like a much bigger reach than the Nineties.”

How much did it color your college experience at Stanford?
The show ended after my junior year of high school, so it colored my experience in college as much as anyone’s high school years colored their experience in college — that was my thing. But in college everyone got a thing. The guy who lived across the hall from me was a world wiffleball champion. And the guy who lived next door was Tiger Woods. So after a very short time whatever novelty you have wears off, and then it’s, “Okay what are you doing now, what are you doing next?” I really appreciated that.

I thought you were being metaphorical about Tiger Woods, and then I remembered he also went there.
[Laughs] We were in the same freshman class. Literally Tiger Woods.

In the Eighties, a show like The Wonder Years had viewership numbers that would be unimaginable now. How do you wrap your head around the changing landscape?
If you look at The Wonder Years, The Cosby Show, Family Ties, Roseanne, and the numbers they were doing compared to today…what makes a hit show then and what makes a hit show now, it’s crazy. But there were fewer outlets. FOX was just getting started. If you were on TV and you weren’t doing a 25-30 share, you were not pulling your weight. So yeah, I mean they’re measured in millions as opposed to tens of millions viewers. But it’s a huge win, because there are so many more outlets to watch things. Like, The Knick on Cinemax — that’s one of my favorite shows. And they don’t need to have 25 million viewers.

When so much of one’s childhood was captured on camera, does it affect your relationship to aging at all?
Boy, that’s a really interesting question. People say the age you become famous is the age you stop maturing. I think I’m better than 11 years old; I think I act like 17 maybe, or 20. But I don’t know. I feel like it would be a lot more restricting if I felt that the audience or the entertainment business was not allowing me to grow up. If everyone was just forcing me to still be 12, I think it might affect things.

But it never felt that way. I mean, after college, nothing achieved the success of The Wonder Years, for sure, but I still feel like I was getting opportunities, and people were coming out to watch. I played a guy who was just out of college on his first job, and I played a guy who was older than that, and now I’m playing a father and a husband, so I never felt like people were unwilling to accept me in parts that were outside of being an adolescent. I mean, look, I have my own conflicts with aging as much as anyone, don’t get me wrong, but I don’t feel like it’s magnified because of my experiences as a kid.

It makes me feel old whenever someone points out that if they made The Wonder Years now, it would have to be set in 1995.
Right! I know, that blows my mind. Adam Goldberg is a good friend of mine — he does The Goldbergs — and I have friends who work on Fresh Off the Boat, and those shows take place in the Eighties and Nineties. I’m like, “Well, that doesn’t seem that long ago.” Except 1968 was 20 years before 1988, and shit, that feels like a much bigger reach than the Nineties. But I don’t know, my oldest kid is nine years old, I think he looks at the nineties as some ancient time.

Have your kids watched the Wonder Years yet?
They just started. Actually, when they sleep over at my mom’s house, she shows it to them. And they love it. They quote it to me all the time. They get such a kick out of it.

This show aside, do you think you’re back in acting?
I don’t know. I feel like, for the first time in a long time, I’m not really thinking about what the next move is. I have a job until November, and you can’t ask for more job security than that in show business. And then we’ll see. [Fox just ordered an additional six episodes of the show.] If this goes well, then to me it just opens up another avenue that I can work in.