In 1962, two-time Oscar winner Bette Davis was appearing on Broadway in Tennessee Williams’ The Night of the Iguana. Though she’d hoped 1950’s All About Eve would reignite her career, she hadn’t been offered many great film roles since, and instead was largely relegated to television guest appearances and the theater. But one night after a performance, Joan Crawford – another Oscar-winning former leading lady considered past her prime – visited backstage to offer Davis a revolutionary part in a brand-new picture. Crawford had been in Hollywood since her teens, but now well into her fifties, producers only seemed to want her playing mothers to younger stars – if they wanted her at all.

Throughout their careers, Crawford and Davis had famously hated each other, fighting over parts, over men, over establishing their place as powerful women in Hollywood. But now, director Robert Aldrich was ready to cast them together in the film adaptation of the suspense thriller What Ever Happened to Baby Jane?, a story of two reclusive former stars, sisters Jane and Blanche Hudson, who drive each other mad inside their Los Angeles home. The result was a campy classic that rode Psycho‘s success to establish horror as a viable genre, and solidified the caricatures of Davis and Crawford – over-acting has-beens who were miserable to watch and even more miserable to know – that persist to this day.

But Ryan Murphy’s Feud: Bette and Joan, the first installment of his new anthology series that premieres this weekend on FX, just might change that. Rather than reinforce the public’s view of Davis and Crawford (thin-skinned, drunken, mean) his production depicts the two as humans – and women – as well as larger-than-life stars they were. Much like how another Murphy series, last year’s American Crime Story: The People vs. O.J. Simpson, gave Marcia Clark a second chance in the public eye, Feud takes a feminist lens to a story that had been largely reduced to satire.

In the new series, Susan Sarandon plays Davis, while longtime Murphy collaborator Jessica Lange plays Crawford. Neither comes off as an imitation – or worse, a drag performance – as they tell the story of how the Warner Bros. studio manipulated the stars on Baby Jane to create drama for the fan magazines, thus driving interest in the film to the point that it became an unexpected hit. Alfred Molina plays skirt-chasing director Robert Aldrich, a committed auteur forced to play by the rules of a ruthless system. Stanley Tucci’s Jack Warner, head of the studio that was home to both Davis and Crawford for much of their careers, drips with misogyny as he drops lines like, “Scotch gets better when it ages – broads just get sour.” And it’s not just the boys who help propagate the system: Aldrich’s assistant, Pauline Jacobson (played by The Americans’ Alison Wright), writes a script for Crawford, but the star shoots her down because she’s a woman – and gossip queen Hedda Hopper (played by Judy Davis) actively pits the stars against each other in the tabloids for her own gain. Nevertheless, for Crawford and Davis there’s a kind of redemption. Instead of two aging crones who can’t pause their jealousy long enough to say a decent word to each other, these are women surviving in a system that’s been trying to dispose of them since the day they hit 40. 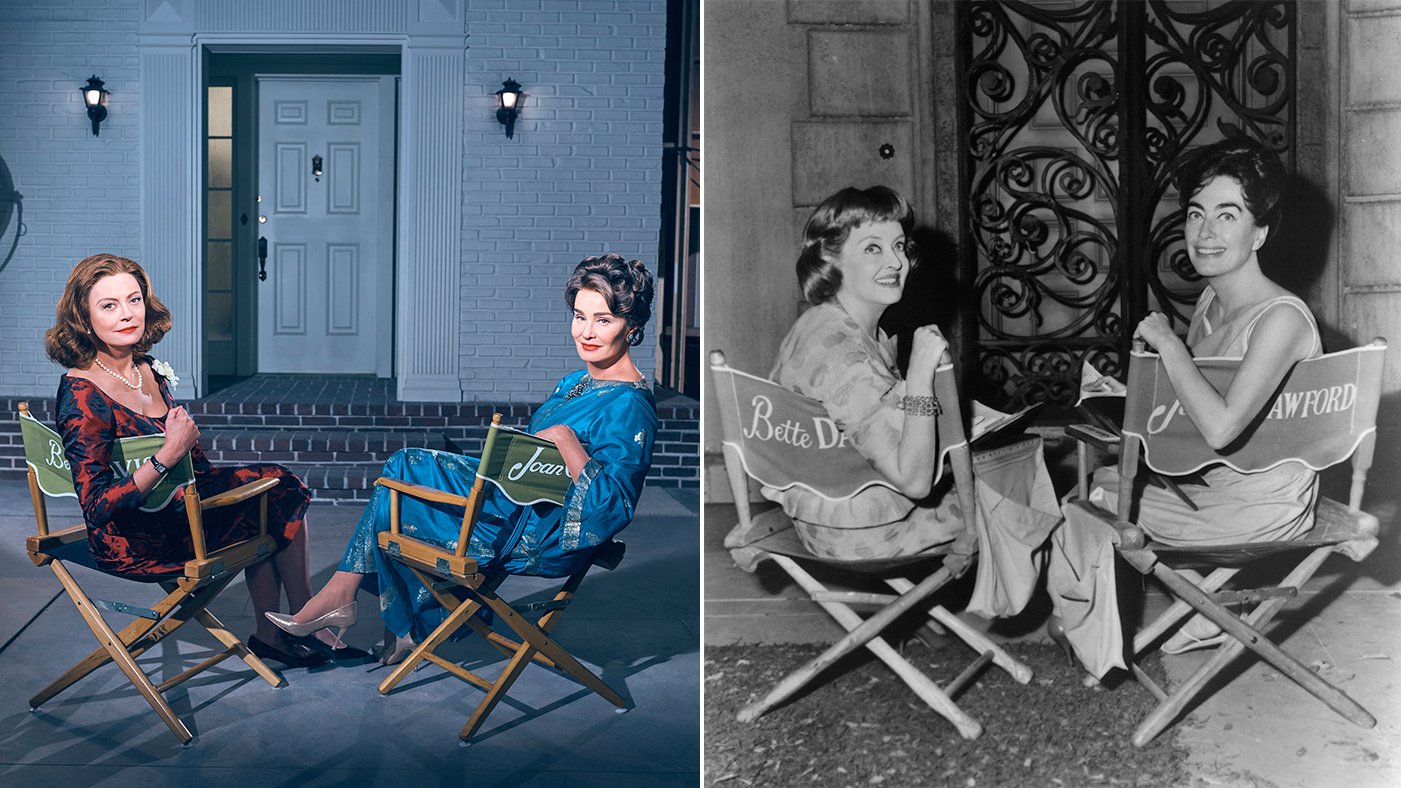 This humanist approach resonated with the costars – both of whom have been active in the film industry several years longer than their on-screen counterparts had when they made Baby Jane. “It tells a story of Hollywood, but that’s just a microcosm of what goes on everywhere,” says Lange. “What interested me the most was the sexism that exists but also, even more so, the ageism. What happens to a woman when she gets to be a certain age, and how devastating that is.” The real tragedy, Murphy has said, is that the two megastars couldn’t get past their differences to team up. “If Bette Davis and Joan Crawford had become friends and allies they could have won so much bigger, and they didn’t,” Murphy told E! News. “They let misconceptions and rumors and 45 years of bad history come between them… and they had more in common than any two people in Hollywood at that time.” (Murphy declined to be interviewed for this story.)

Murphy came into the project knowing that he wanted to offer the deeper story behind the making of Baby Jane. A fan of Davis’s since childhood, the screen legend granted Murphy a 20-minute interview just months before her death in 1989 – he stayed, smoking cigarettes with the star, for four hours. “When I would ask her about Joan Crawford, she would lead with the ‘Ugh!’” Murphy recently told People. “She would just go on about how much she hated her. But then she would sort of say… ‘She was a professional. And I admired that.'” The conversation gave him insight into the nuance of the legendary feud – and the idea’s been with him ever since. Initially developed as a film (he even approached Sarandon and Lange to play the co-starring roles) it wasn’t until the project was expanded to an eight-part series that the two leading ladies signed on.

“Bette Davis has been chasing me down for years,” says Sarandon. In the 1980s, Davis got in touch through a director to see if Sarandon would play her in a movie – but that project never got off the ground. There were four or five other films – and a theater project about Crawford and Davis – that Sarandon had considered, but it wasn’t until Murphy came to her with the promise of a deeper narrative that she decided to join on. “He said, ‘We need to ask the question, how do we change that women are still put against each other?'” she says. “And then I thought, ‘Well, now at least we have something else besides doing an imitation of Bette Davis and Joan Crawford.'” The other thing he emphasized was a commitment to promoting both genders behind the camera, noting half the episodes would be directed by women, including Helen Hunt.

Sarandon was pleased by the female-heavy crew, but also by opportunity to work with Jessica Lange, who she’d known for years. “We’re both survivors in this business,” Sarandon says. “And I’m always looking forward to working with other women – because that just doesn’t happen that often. I mean I did Thelma and Louise, obviously, but this isn’t the kind of thing that presents itself that often. And so I thought, okay, I’ll jump.” 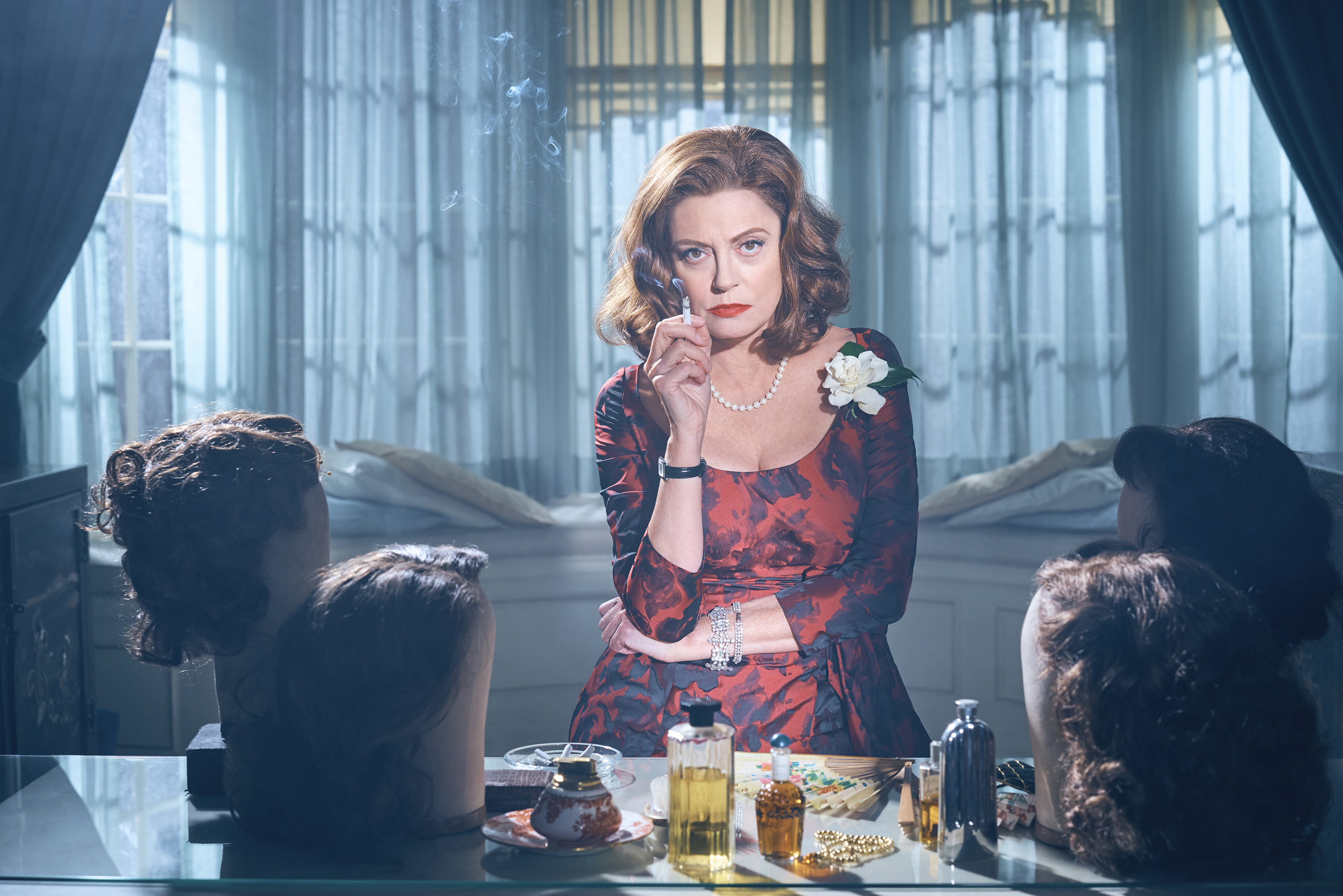 Lange, who has regularly worked with Murphy since the first season of American Horror Story in 2011, didn’t necessarily need the promise of women directors and a strong female costar to sign on to project, but she says it certainly affected the feeling on set. “I think it’s good to have women working alongside other women,” she says. “And I think Ryan is really doing something meaningful with that. He’s not just paying lip service to an idea. And it changes the feeling on the set entirely.”

Both Lange and Sarandon intensely researched their roles. Sarandon read the two books Davis wrote – as well as the tell-all her daughter B.D. Hyman penned in the 1980s – and watched every appearance she could find. “There’s a ton of TV performances,” she says. “Talk shows, film festivals, there’s footage of her everywhere.” But she credits her success in the role to Tim Monich, her dialect coach, who helped her pick up Davis’ “idiosyncratic” lilt.

For Lange, who came in with only a vague sense of her character, it took learning about Crawford’s painful upbringing – “dirt poor,” sexually abused by her stepfather, sent to boarding school and abandoned by the time she was 16 – to connect with the role. “That all informed how I was going to play this woman,” Lange says. “I think she was a real scrapper and used whatever she needed to become famous, to become one of the great movies starts of that era, and what it meant to her to hold onto that.”

From the script to the portrayals to the camera angles themselves, it’s the compassion for the real women that drives Feud. Sarandon says that it’s Murphy’s ability to approach stories about women with sensitivity that makes the show so compelling. “The pain, and the shame and the persecution, and the suffering of women, he brought [it all] to that feud,” she says. “At the bottom of it is pain and betrayal. At the bottom of any feud is pain.”