Emmys 2020: Sepinwall on the Emmy Awards Without the Red Carpets - Rolling Stone
×

In these scary, uncertain times, we look for silver linings wherever they can be found — and the 2020 Emmy Awards telecast was almost entirely silver linings. The pandemic made a ceremony impossible, and unlike some other Covid-era awards shows like the BET Awards, there’s no real performance element that could be produced in advance. The Emmy show is almost entirely about the winners marching to the stage and giving speeches. This forced the Emmy producers — including Reginald Hudlin and host Jimmy Kimmel — to rethink almost everything about the telecast.

Nominees were given camera and lighting rigs to set up in their homes, and interns in hazmat suits were sent to stand outside people’s living rooms to hand them trophies should they win. (Or walk away if they lost, as Ramy star/co-creator Ramy Youssef provided hilarious evidence of on Twitter.) A handful of (presumably Covid-tested) stars made their way into the theater with Kimmel at different points for introductions and comedy bits of varying effectiveness. (Jennifer Aniston using a fire extinguisher to save herself and Kimmel from a trash-can flame that had clearly raged beyond its planned size was incredibly endearing.) But in many other cases, categories were introduced by non-celebrities on the Covid frontlines, or in a no-frills fashion by Kimmel himself.

Emmys 2020: The PandEmmys, Even Better Than the Real Thing

Kimmel started the show pretending like all was normal, doing a monologue intercut with reaction shots from past Emmy telecasts, to make it look like he was in a packed theater. (When the lights came up to reveal the empty space and explain the joke to those who didn’t understand, Kimmel quipped, “This isn’t a MAGA rally! It’s the Emmys.”) But everything after that bit was so unusual and lo-fi that it breathed new life into what’s rarely the most interesting of big Hollywood awards shows in its best years. And it really made lemonade out of the lemon that would have been an especially tedious ceremony this year.

It was a night of one complete sweep and two shows that felt as close to sweeps as the Emmys usually get. Schitt’s Creek made Emmy history of a sort(*) by winning all seven of the comedy categories featured in the live telecast (as always, more obscure awards were given out prior to the Kimmel-hosted ceremony), while Watchmen and Succession had dominant nights in, respectively, the limited series and drama categories.

(*) Back in 2004, the HBO limited series Angels in America also went 7-for-7 in the telecast. Schitt’s Creek, though, became the first ongoing show to complete such a sweep. (No prior series — not even Emmy juggernauts like Hill Street Blues or The Sopranos — had even swept the four acting categories in the same year.) 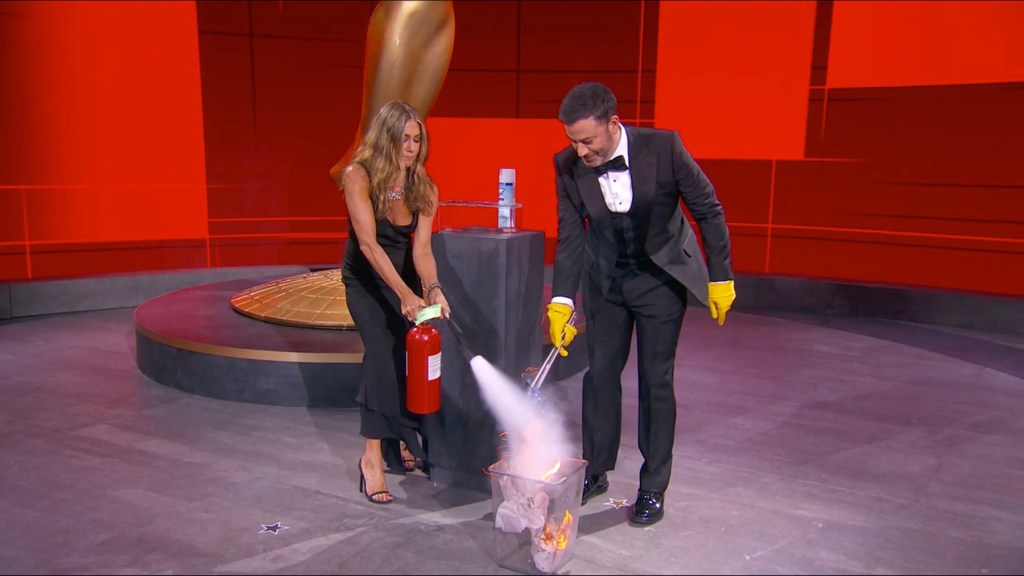 There were a couple of winners who seemed out of left field — Zendaya (who is fantastic on Euphoria, a show that would not work at all without a performance as good and natural as hers) beat a much more seasoned group of competitors, including Jennifer Aniston, Olivia Colman, and last year’s winner, Jodie Comer, for the drama lead actress award — and the completeness of the Schitt’s Creek rout was a bit unexpected. Mostly, though, it was a night where even people who are bad at predicting the Emmy results were able to predict most of the Emmy results.

Dominance isn’t necessarily a bad thing for the historical record. Watchmen was the defining show of the last year, and could have won even more than it did without eliciting complaint. The very nice and sweet Schitt’s Creek isn’t the comedy I would have chosen to make Emmy history in this way. But it’s also not hard to understand why voters were particularly attracted to such a warm and gentle show in this year, especially since the previous seasons made such an easy and relaxing binge during this hellscape, and since stars Catherine O’Hara and Eugene Levy have built up so much affection in careers that stretch back to the early Seventies. But the Emmy telecasts of late have been structured to place all the categories in the same genre together, which only underlined how much the same shows kept winning again and again. (When he won his third award of the night, for Outstanding Supporting Actor in a Comedy, Creek co-creator/star Daniel Levy looked a bit sheepish as he said, “OK, the internet’s about to turn on me. I’m so sorry!”)

But the lo-fi quality of the event provided the unpredictability that the awards themselves mostly lacked.

When the nominees for each category were introduced, we got glimpses of the wildly different locales and dress codes they had opted for. The night opened with the comedy lead actress race, where O’Hara was gathered with the Schitt’s Creek cast and crew up in Canada at what looked like a bar mitzvah catering hall. Issa Rae was at the LA Rams’ empty new stadium (where she was hosting a watch party for the Insecure team). Dead to Me‘s Christina Applegate was just sitting in front of a roaring fireplace. And Mrs. Maisel herself, Rachel Brosnahan, was flanked by pals in pajamas. Seeing who was where, and under what circumstances, became a fun game to play during the night. And having the Schitt’s Creek gang all together — in addition to the show being created by a father-and-son duo — allowed for some of the hugging and cheering that we would have gotten from a more traditional awards show.

Though a few acceptance speeches were given over unstable internet connections, no one actually missed their big win due to technical difficulties, and most of the nominees virtually showed up. And having the nominees and winners so often flanked by their loved ones added an emotional, homey touch to what can often be a sterile event filled with laundry lists of winners’ managers and stylists. Better Call Saul producer Thomas Schnauz lost the drama writing award to Succession creator Jesse Armstrong, but it was charming to see his two young kids frantically bouncing on the couch behind him as he waited for the results. I Know This Much Is True star Mark Ruffalo was one of several winners to deliver passionate speeches about the precarious state of the world and the importance of voting in November, and he had his wife, Sunrise Coigney, huddled next to him on a love seat, cheering him on the whole time. Watchmen TV creator Damon Lindelof was surrounded by his writing staff as he accepted the Outstanding Limited Series award — improbably, his first Emmy acceptance speech since Lost won best drama after its first season, 15 years ago — and recounted all that he had learned from them in the process of making the show, including, “Stop worrying about getting cancelled and think about what you’re doing to get renewed.”

Almost every instance where the show had to strip away its familiar artifice was better than how this traditionally works. The pre-taped frontline worker intros were all more interesting and lively than the usual lame banter we get when actors present the awards together on a stage in non-pandemic times. There were attempts to do similar bits of celebrity business here, like Aniston (having raced home after the fire extinguisher gag) sitting with Courteney Cox and Lisa Kudrow and claiming they’ve been living together since Friends Season One, but they were generally upstaged by the simpler elements. (And the timing of that Friends bit was maybe the most impacted by internet connections of anything on the night.)

It was, on the whole, a much more entertaining Emmy night than we’ve gotten in quite some time, and should hopefully influence how these things are produced even after public life has hopefully returned to something resembling normality. As Kimmel put it early on, “What’s happening tonight is not important. It’s not going to stop Covid, it’s not going to put out the fires, but it’s going to be fun. My god, do we need fun!”