It was when half the Doom Patrol traveled through a flatulent donkey to another dimension that I realized a line had been crossed. Probably in a good way.

We’re nearly seven years into the modern TV superhero-drama boom, which began with the CW’s Arrow. In those early days, when Oliver Queen was running around without a mask and only being called “the vigilante,” there was a sense that the people adapting comic books for the small screen felt they had to hold viewers’ hands through the whole concept. Even though the big-screen adventures of Iron Man and friends had already proved that audiences could just go with this stuff, television took a more cautious approach to the material. (When Marvel broke into TV a year after Arrow, there were some Season One episodes of Agents of S.H.I.E.L.D. that were barely distinguishable from that night’s NCIS.)

Dave Chappelle 'Open' to Discussing Controversial Jokes in 'The Closer'

In time, though, the executives who green-light these series, as well as their producers, have become more comfortable embracing the trappings of the source material — and expanding the kinds of stories that can be adapted. The CW’s DC Comics shows regularly cross over with one another, with characters leaping from one parallel world to the next without much exposition beyond “Somebody go to Earth-38 to pick up Supergirl.” Social commentary quickly became an accepted part of the toolkit on the likes of Black Lightning, Luke Cage and Jessica Jones. A few years back, NBC tried a workplace sitcom, Powerless, set at an unglamorous division of one of Bruce Wayne’s companies; it didn’t quite work, but it suggested TV might be more flexible with its superhero adaptations than would have seemed possible back in the days when Smallville had its “no tights, no flights” rule.

Two years ago, FX’s Legion broke new boundaries for comic-book TV weirdness, turning the adventures of a minor X-Men character into a visually audacious, well, marvel. That show’s second season illustrated the limits of emphasizing style above all else, though, and FX recently announced that the upcoming third season will be the last. But it helped carve out space for this Friday’s streaming double-feature debut of ultra-bizarre comic book shows: The Umbrella Academy on Netflix and Doom Patrol on DC Universe.

Umbrella Academy, based on the Dark Horse comic co-created by My Chemical Romance’s Gerard Way, involves a family of former child superheroes who reunite after the death of their adoptive father, only to discover that they have a few days to prevent the end of the world. Doom Patrol draws on bits and pieces of 56 years worth of comics (including a recent stint written by Way) in telling the story of a group of freaks brought together to protect a world that otherwise fears and mocks them. Both shows feature characters so strange it’s hard to imagine TV allowing them over the border even five years ago. Now, though, the medium is apparently safe for the likes of Doom Patrol‘s Negative Man, a disfigured former test pilot named Larry Trainor who wears head-to-toe bandages and can release a being made of pure energy over which he has no control.

And, yes, there’s a farting donkey that’s also a portal to another dimension. In a genre that TV often opts to take much too seriously, that donkey — and many of the other unusual elements of these shows felt like sweet, bemusing relief.

Still, despite early promise, only one of these two series is fully ready to let its freak flag fly, and is much better for it.

The 10-episode first season of Umbrella Academy suggests a musical trapped in the body of one of Netflix’s more tedious Marvel Comics vigilante dramas. Periodically, it’ll offer a delightful sequence scored to an interesting song: say, two assassins (Mary J. Blige and Mindhunter’s Cameron Britton) tripping balls as they dance to Tom Swoon’s “Shingaling” and study a roomful of prosthetic eyeballs for clues; or underage teleporter Number Five (Aidan Gallagher) taking on a team of killers in a doughnut shop as the lights flicker in rhythm with They Might Be Giants’ “Istanbul (Not Constantinople).” Too much of the series, though, suffers from the same grey emotional palate and cement pacing that have afflicted every other Netflix superhero show. It offers weirdness by the metric ton: The Hargreaves siblings were largely raised by a talking chimp named Pogo (voiced by Adam Godley) and a robot (Jordan Claire Robbins) styled like a Fifties housewife; Number Five is actually much older than he looks and has a dismembered mannequin for a girlfriend; and drug-addicted medium Klaus (Robert Sheehan) spends part of one episode fighting the Vietnam War. But each unusual new detail is simply shrugged off as the siblings mope their way through their disappointing lives. It’s a particularly egregious “four episodes worth of plot in a 10-episode bag” offender, with Number Five’s time-travel shenanigans erasing various parts of the story as it goes along. (And not in that Russian Doll way where the reset feels like part of the fun.) Much too much screen time is given to the two drippiest characters, superstrong Luther (Tom Hopper) and heroine-turned-movie-star Allison (Emmy Raver-Lampman), who are busy dealing with tedious personal drama (including his crush on her) while their brothers are trying to avert the apocalypse. As Vanya, the one sibling who couldn’t join the team due to a lack of powers(*), Ellen Page is utterly wasted until the season’s last two episodes, by which point Umbrella Academy has squandered most of the goodwill its occasional bursts of stylistic inspiration have generated.

(*) This is never well-articulated, since another team member, Diego (David Castañeda), only seems capable of jumping around and throwing knives. 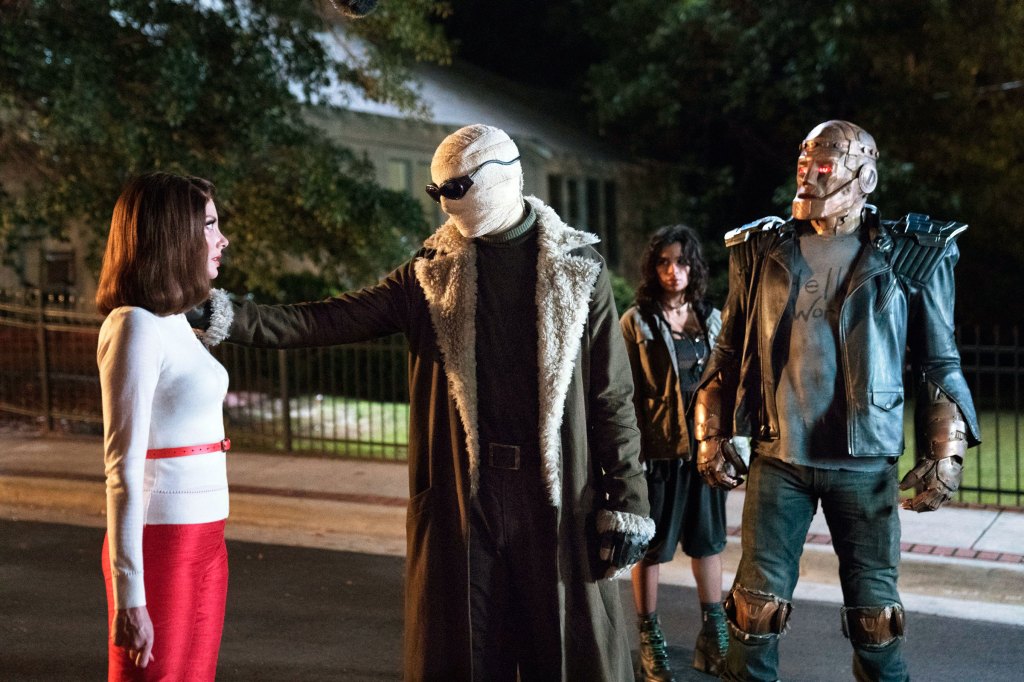 The first two episodes of Doom Patrol at their best don’t offer anything as thrilling as Umbrella Academy‘s periodic flashes of inspiration, let alone what Legion has done. But the series is refreshingly self-aware, both in the hilarious meta narration by Alan Tudyk as the team’s archenemy Mr. Nobody — “More TV superheroes, just what the world needs,” he sneers in the opening moments. “Be honest: have you hung yourself yet?”(*) — and in its more fundamental understanding that if you make a show about these characters, you’d best come weird or not come at all. Its highs aren’t as high, but it’s more consistently satisfying.

(*) Later, Mr. Nobody quips, “Critics, what do they know? They’re gonna hate this show.” Apparently, he’s read the reviews (like mine) of DC Universe’s first series, the unbearably grimdark Titans (where several Doom Patrol characters first appeared). Suffice it to say, this new show is as enormous a departure from Titans in tone as it is in quality.

The lineup is mostly the classic Sixties group: Negative Man (played by Matthew Zuk under the bandages, though Matt Bomer provides the voice and plays Trainor in flashbacks); Robotman (Brendan Fraser as the voice and the flashback body, Riley Shanahan playing him in the present), a former NASCAR driver whose brain has been put inside a metal shell; Rita Farr (April Bowlby), a former movie star whose body is now elastic (and not in a glamorous way like the Incredibles character who borrowed her comic-book superhero name); and Niles Caulder (Timothy Dalton), the wheelchair-bound genius who’s helping them cope with their horrifically altered circumstances. They’re joined by two younger characters: Crazy Jane (Diane Guerrero), who has 64 different personalities and a superpower to go with each one; and Cyborg (Joivan Wade), who (when played by Ray Fisher) was part of the recent big-screen Justice League.

Even working through the obligatory origin story material in the series premiere, Supernatural vet Jeremy Carver is smart enough to keep the mood off-kilter and amusing whenever possible. We meet Mr. Nobody before any of the heroes, and Tudyk’s voice is always there with a joke whenever things risk getting too slow or sentimental. Like Titans, it doesn’t seem as if DC poured a ton of money into this effort, but the lo-fi quality of the thing suits the characters and their cracked world nicely. Robotman looks like a guy in a cheap metal suit, which feels about right.

It’s not entirely fair to compare a full season of TV to two episodes, obviously. By the similar point in Umbrella Academy, I was frustrated by the pacing and tone, but intrigued enough by those occasional standout moments to hope there might be more; it wasn’t until later in the season that it was obvious they’d be the exceptions and not the rule. But Doom Patrol seems to understand the same thing that the best — and, not coincidentally, weirdest and funniest — of its CW counterparts, Legends of Tomorrow, figured out a few years back: There is a fundamental absurdity to these stories, and you can (and should) embrace that while still treating your characters and their emotions as real and worth caring about. (Seriously, Legends this season has had the team fighting unicorns and fairy godmothers, and last season climaxed with a giant-sized Elmo knockoff saving the universe. It’s gloriously demented.)

Superhero weirdness for its own sake can have its limits, as we’ve seen with Legion. But so many modern comic-book adaptations default to sober and joyless that the eccentricities of Doom Patrol (and, on disappointingly rare occasions, Umbrella Academy) couldn’t feel more refreshing.