In Season One, Episode Three, a young Emily Dickinson and her siblings decide to throw a house party after their parents go to Boston for the night, in the hope of having a carefree, wild night. Fueled by opium, Emily and her friends eventually start dancing aggressively to Carnage and ILoveMakonnen’s “I Like Tuh.” It’s what Dickinson creator Alena Smith considers a “quintessential” moment that’s been repeated throughout the show’s first two seasons.

When Dickinson premiered on Apple TV+, the coming-of-age period dramedy, starring Hailee Steinfeld as the American poet, was quickly regarded for its modern sensibilities and anachronistic soundtrack. But according to Smith, the selection of songs by the likes of A$AP Rocky, Billie Eilish, Lizzo, Wiz Khalifa, and others isn’t meant to be random. They’re used in a specific and heightened way.

“The music plays a really important role because it’s basically our direct access to Emily’s consciousness and to the ways that her consciousness kind of exceeds and explodes out of the repressive moment that she’s sort of trapped in as a woman living in the mid-19th century,” Smith tells Rolling Stone. “There really is a narrative role for this music. And much like the way that the language of the dialogue sometimes will subvert period expectations, the music is really doing that all the time. And it’s giving us this kind of emotional access point to Emily’s feelings.” This is the same series, she notes, that features Khalifa as “Death,” with much intended irony.

In order to achieve such a specific tone that has continued well into season two, Smith’s collaboration with music supervisors Gabe Hilfer and Devoe Yates has become pivotal in executing a key part of the show’s storytelling.

As the music supervisors, Hilfer and Yates not only help pinpoint the right song for any given music cue in each episode, but also secure permission and the legal rights from various labels and artists. “Dickinson is a tag-team effort,” Hilfer says. The two work together by siloing their responsibilities, with Hilfer handling most of the negotiations and licensing while Yates works closely with the creative team on music selection. “It’s a good partnership,” Yates adds.

And it’s a dynamic that first started on Season Four of HBO’s Eastbound and Down. “We became really close,” Hilfer says, explaining that over time they developed a working relationship that played on each other’s strengths. “And so we kind of complemented each other.” From there, their working relationship grew to include Vice Principals and Righteous Gemstones, both of which were also executive-produced and directed by David Gordon Green, who then introduced Smith to Yates after directing Dickinson’s pilot episode.

When it comes to specifically working on this series, it all starts with the script, which often includes notes about the music that should accompany a given scene. Because of how Hilfer and Yates have divided responsibilities, the latter is often working with Smith in-person in New York, where the show is filmed, as the episodes are being written and developed. Smith adds, “We are pretty much in constant communication” during this time.

While ideas sometimes are as specific as wanting Andrew Bird — as Smith did for Season One’s fourth episode, which features “Give It Away” — more often than not, they work off a theme or idea to come up with the best song selection. “[Yates] builds lists of options for various moments, as well as drilling down deeper into special musical moments, like dance scenes or piano singalongs,” Smith says.

“Then from there, you know, I’ll pull some stuff in that direction,” Yates says, putting song ideas together until he has enough options to play for the editors. 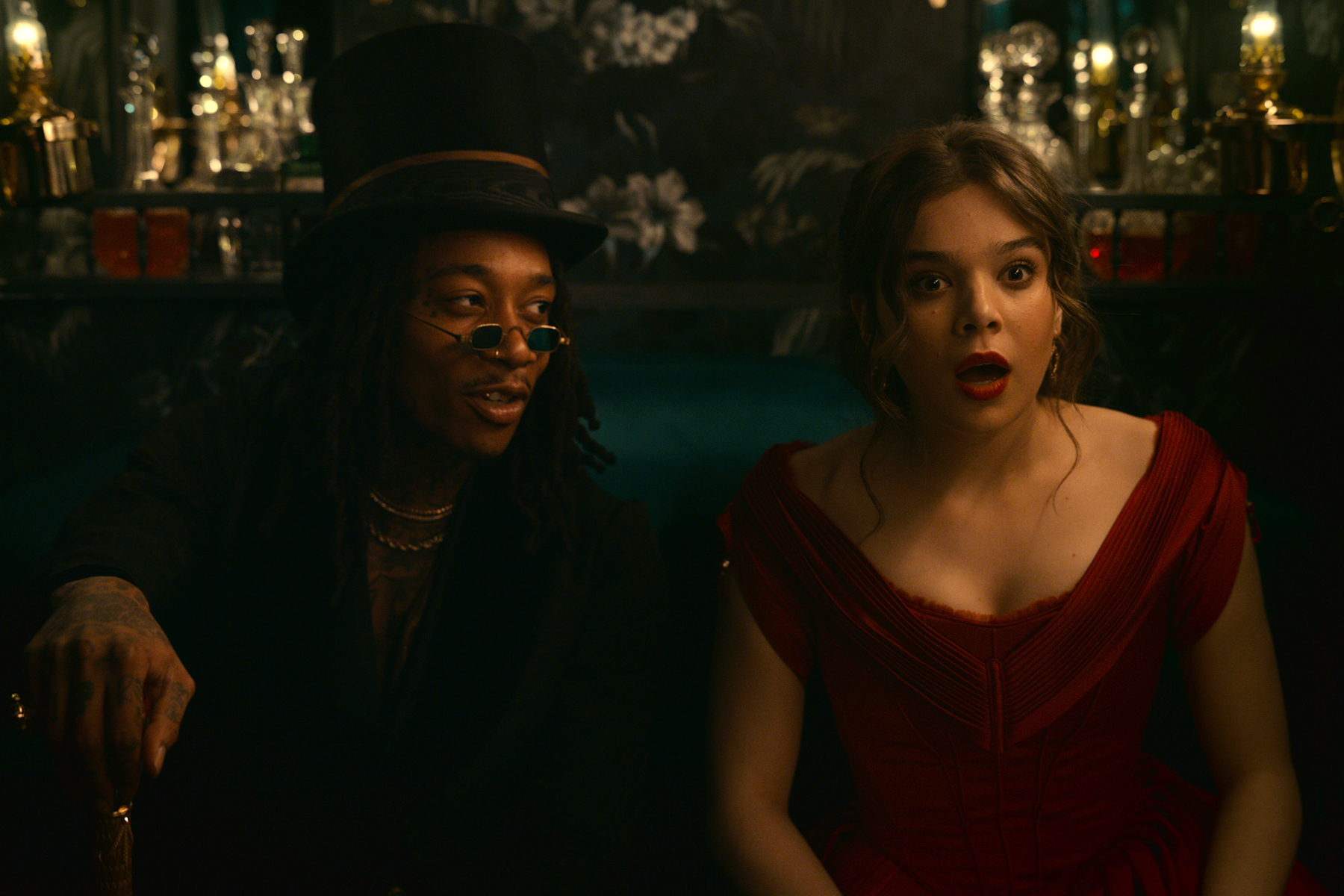 Wiz Khalifa and Hailee Steinfeld in Season Two of “Dickinson”

“Once we get into post [production], that’s where the real fun begins,” Hilfer says of the trial-and-error process of playing anywhere from five to 10 options over a scene to see which fits best. “We have a lot of amazing opportunities to play around and have fun.”

From there, it’s up to Hilfer, who is based in Los Angeles and communicates directly with Yates over the phone, to work with the labels and publishers who represent the songs. “Once we see a song is scripted, or a song selected, it can take anywhere between a day and a few weeks to obtain the approval,” he says, revealing that “sometimes we deal directly with artists or lawyers, too, depending on how they have their business set up.”

Because they want the soundtrack to be modern but not dated, at least specifically to earlier decades like the 1980s or 1990s, Hilfer says, they found themselves looking for unexpected choices from across all genres and up-and-coming artists. When it came to landing Eilish’s “All the Good Girls Go to Hell” in Season One, before the song had even been released, Hilfer credits Apple Music’s David Taylor for challenging them to “find cool stuff that fits within the brand.”

Hilfer adds that “Apple is super-forward-thinking when it comes to music … and it’s a good North Star for us to find cool things maybe before they’re released or before they break.”

As a team, they’ve rarely had any setbacks when it comes to getting the music they’ve wanted on the show. “People have really embraced Dickinson, and luckily we haven’t run into this issue much,” Hilfer says, explaining that what sometimes leads a label or an artist to say no to licensing their music for any given show is that “an artist might not want their music associated with a particular scene or project because of content, or they might feel that the scene is making fun of their music.”

Other times, depending on how much of the artists’ music is being used, “they might not want to diminish the impact of their music in that,” he adds.

When it came specifically to featuring Khalifa’s song “Contact,” it helped that the artist was a character on the show. The song is heard in Season Two, Episode Eight, when his character reappears. And in order to get permission to use it, Smith says that they “reached out to him and his team directly.”

The only real difficulty for Dickinson, Hilfer says, is licensing sample-heavy rap songs, which sometimes makes it nearly impossible to clear. “I definitely really like hip-hop, so there’ve been times when that’s been sad,” Smith says, while clarifying that “there’s no music cue in the show that I feel disappointed about.”

While some of Hilfer and Yates’ highlights on the show’s soundtrack include Steinfeld’s original song, “Afterlife,” in Season One, and LunchMoney Lewis’ “Make That Cake,” with Doja Cat, in Season Two, Smith feels the big dance moments in the first two seasons best exemplify what they’re trying to achieve on the show. (While the first one featured Carnage during the house party, the latter included “Gon Blow,” by Cakes Da Killa and Rye Rye, playing over a vogue and ballroom sequence in a barn.)

“I think those are quintessential Dickinson moments, using contemporary music to open up the period genre,” Smith explains. “And there are definitely moments that are kind of in conversation with each other, because, in some ways, I think that the second dance scene is a bit of a response to the first dance scene.”

Already renewed for a third season, the series is planning to resume production later this year. After completing filming on Season Two just before the pandemic, this will be the first time they will be working under strict Covid-19 safety protocols. For Smith and Yates, that likely means less time in-person and more communication “all over email, phone, and text,” the creator says.

So far, the restrictions haven’t resulted in any setbacks for the music-supervision team as a whole. In Hilfer’s case, it’s made people easier to get a hold of or to track down. But it could make it difficult for them to film another group dance scene. “I really hope we will be able to pull it off even in a Covid world,” Smith admits.

That said, “everything lived up to my dream of what it could be,” Smith says of what she, Hilfer, and Yates have achieved so far with Dickinson. “I’m just so phenomenally lucky to have Devoe and Gabe as my partners on this team.”