This article contains full spoilers for the series finale of The Deuce, which we reviewed here.

Though their subjects and locales are different, every David Simon show has certain common themes about individuals being crushed by the weight of American institutions. And every David Simon show ends more or less the same way: with a musical montage summing up that show’s themes while giving us a sense of what all the characters will be doing in the immediate future.

Or, rather, every David Simon show has ended that way until now.

Most of this final season of The Deuce has taken place in 1985, as we’ve watched characters die, leave town, or find some other way out of a life of sex work and other forms of vice. The series’ main narrative concludes with bar owner Paul (Chris Coy), frail from what he assumes will be a losing battle with HIV and AIDS, enjoying the crisp autumn air of New York City. Paul hobbles down the street on his cane…

… and suddenly we are in the New York of 2019, with James Franco’s Vince channel surfing in one of the many opulent corporate hotels that have conquered Times Square in the intervening decades. Vince has a drink at the hotel bar — the antiseptic opposite of the lively, grubby joints he ran in the Seventies and Eighties — reads a newspaper story about the death of Maggie Gyllenhaal’s Candy, and takes a stroll through what’s become of his old neighborhood. As a Blondie cover of “Sidewalks of New York” plays, he’s greeted by phantoms of many characters who died over the series’ run, and by those of people like Paul and Candy who passed away after we last saw them. 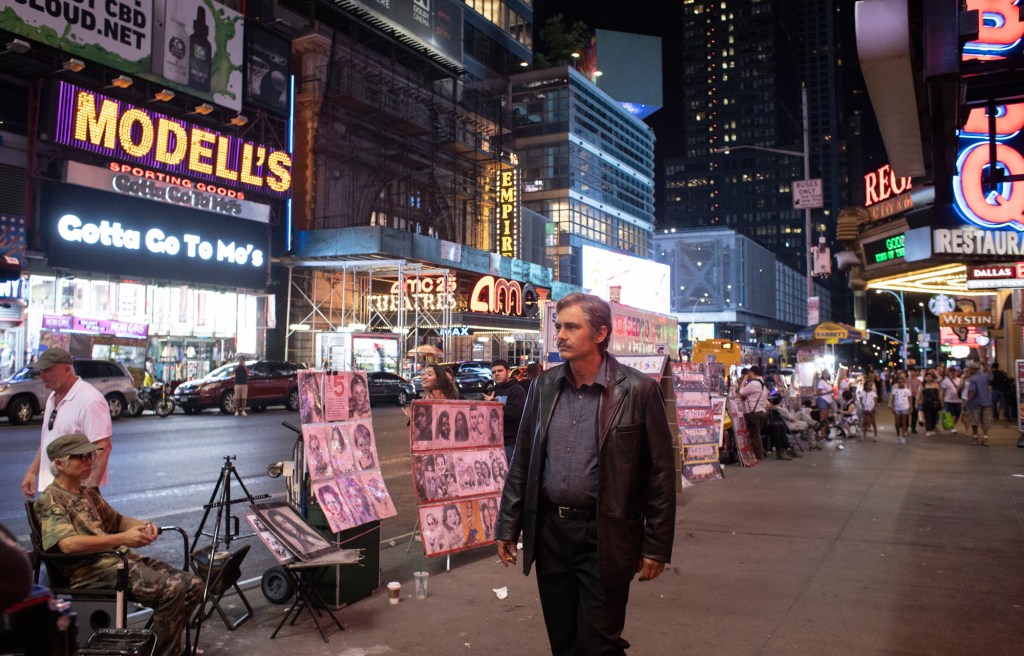 It’s a striking sequence, and not just because it’s the first time the series was able to film in the actual Times Square, rather than faking its disreputable old look up in Harlem. I spoke with Simon about how he and Deuce co-creator George Pelecanos came up with the idea before they’d written any other part of the series, the logistics of bringing former cast members back to film it, and why he felt it was “maybe the most fun way to end a show.” (Simon and Emily Meade covered some larger themes of the series in an earlier interview.)

Where did the idea for the 2019 epilogue come from?
From the moment we ended up talking to the [real-life inspiration for] Vincent. The last scene of the show was the only one we had written in our heads when we started the project. It came from talking to the original Vincent not only about his life in Times Square, but what had happened to all the people that he was telling us stories about. All the anecdotes, when you would ask, “What happened to her? What happened to him?” none of them ended with, “She married a psychiatrist and they’re living in Scarsdale.” There was a lot of attrition, and a lot of dislocated people, and there was some sense on the part of the guy we were with, who was in his sixties at the time, of having outlived most of the people he had come up with. So there was a sense of nostalgia mixed with regret and loss that was pretty powerful for George and myself. To be honest, we initially tried to see if we could possibly execute the idea of a continuing structure of a guy talking in the bar, and even having a reporter or a screenwriter come in to start getting the stories from him in 2019, and run that all the way through — using it as a mechanism to have an interior voice of the character. After the first draft, we abandoned it. We felt you can’t sustain that over 25 episodes. It would start to fold in on itself; the weight of it would become exhausting. But that’s how firm we were on the idea of where the piece was going. We literally wrote the last scene first.

Were there some ghosts you wanted Vincent to see, but the actor wasn’t available? Or were the characters who didn’t appear ones you decided should still be alive in 2019?
If you don’t see them, they’re alive. By and large, if they were alive at the end of 1985 and you don’t see them in the ghost sequence, then they’re still around. Drea, his ex wife, is still around. Abby is still around, and you see her. Goldman’s still around. Alston is. We had some decisions as to who we thought might have negotiated well over the course of the next 33 years or so, who might have reached old age. Candy made it to her seventies. We had the fun of thinking about who might have reconnoitered old age. Not everybody could be in there. And were there a couple of people we couldn’t get back? Yeah, there were. The only people who couldn’t get back had gigs where they could not get to New York in the window. Because obviously, we needed everybody for one or two nights. By and large, we were pretty determined to get everybody, and we scheduled accordingly. The camaraderie on the show has been such that all the actors wanted to do it. As we clapped people out the last two seasons, I would say, “You’re also coming back for the last episode.” I was even doing that in the first season: “If they let us get to the end of this thing, you’re working the last episode. I’ll see you then.” Some people thought I was joking, but I was like, “No no no, we wrote the last scene.” 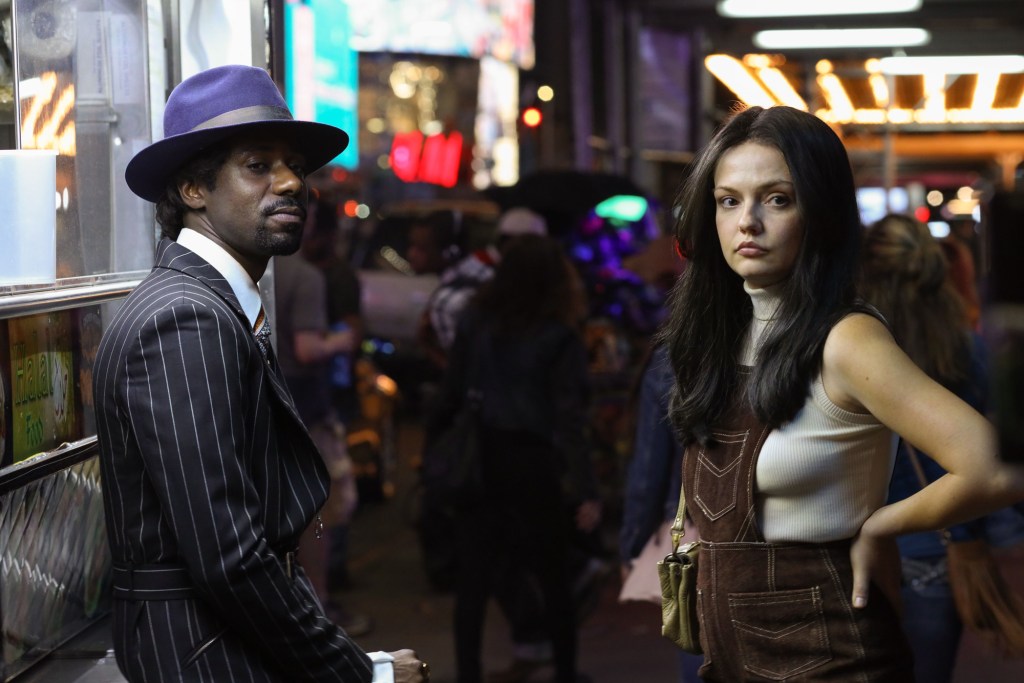 What was it like having these actors back, doing these all-night shoots in the middle of the modern Times Square?
We’re shooting the real Times Square. We needed all the darkness we could get to keep shooting. We would set up around six in the evening, and then we shot till morning. Obviously, getting James to do both sides of Frankie and Vincent, that’s a time crunch that required a second day’s work. I think we might have paired that with Candy, if I’m remembering correctly. It was a little bit further up Seventh Avenue. We were trying to do it in two days. So here’s all these actors coming back to a project that has turned out well. They’re proud of the work, and they missed each other, they did a lot of hard work together. People like Gary Carr and Emily are seeing each other for the first time since they wrapped the previous season. And that’s happening over and over again. Cliff, Method Man, he’s showing up and working a scene with Kim Director. So there’s all this nostalgia. It was kind of like a wrap party on the street. And it was a lot of fun. Actors would disappear into whatever the holding area was, and you’d find them back in some restaurant booth, and you’d say, “No, guys, you gotta work now!” And they’re, “No no no, we’re telling a story!” You just kept interrupting bull sessions. It was really charming. It was maybe the most fun way to end a show I can recall.

Was there anything else, in terms of story or theme or character, that you talked about using the epilogue to convey? Or was this always what you wanted to cover?
It was what we wanted to cover. We would have tightened it up by the line if we could have. We knew we were over the hour. Every line is in there for a reason, even down to Vincent explaining that he no longer lives in New York, and he’s back for Joey Dwyer’s wedding and sentencing. We even put that in there, because we needed to explain in the most efficient way why he’s in a hotel room in Times Square. Why is he having a tourist moment? Why is he walking into a bar that has no charm or New York essence?

Did you figure out in your heads what Vince has been doing between 1985 and when we catch up to him now?
We did. Since everything closed down on him, we knew that the real guy had done several things, but his big venture was to become a restaurateur. As he said to us later, “You want to lose money? Go into restaurants.” I think he’d done a lot of stuff. So we had a sense of Vincent transitioned to something basically legitimate. He certainly had the skill set for it. The real fellow’s twin brother was shot at the club. Didn’t succumb to the wound right away. Had several years, actually, after the shooting. He lost an eye. They didn’t get the bullet out, but eventually, meningitis got him. It took many years, and we played that a little bit differently.

There’s a memorable moment on The Wire where Cutty’s hospital roommate is watching Deadwood. Here, as Vincent’s channel surfing, we hear the Game of Thrones theme for a moment. Was there a particular reason for that selection here?
We had to scan five or six channels at once, but it’s hard as hell to clear stuff. HBO stuff is much easier to clear. It’s just a means of covering the ground efficiently. There’s really no purpose to it other than that. If you’re comparing it to The Wire moment, I have some affection for David Milch. I wrote an episode [of NYPD Blue] for him, and we always got along well, and I admired his work, and it was just me being playful with him in that moment.

As the story moved off the street, you had to lose a number of characters. Some of them, like Darlene, came back this season. But I kept expecting, for instance, to see Larry, and he’s only in the old Red Hot footage Candy watches a few episodes back. Was it difficult to follow the story to places where you had to leave behind actors and characters you liked?
You want people to be able to do good work. When you start servicing actors rather than servicing story, you’re not doing your job. They’ll feel it as well. The trick to using actors well is to tell the story you’re supposed to tell, allow them the opportunity to do the best work they can, and then when you’re ready to say that that arc has been completed, deliver the proper exit. They can go do better work. Gbenga [Akinnagbe]’s killing it on Broadway. Was doing it the entire time we were shooting, in To Kill a Mockingbird. I thought of one small moment where we could have referenced what I thought happened to Larry Brown, which is he became an actor. There was one small moment where you saw Tod got a paying gig on the soap opera. And I thought that might be the one place where we saw Gbenga, on the TV screen, in the soap opera. It would have been a sweet little callback. Unfortunately, the days we were shooting it, he was on stage. And we totally understood that. For such a small moment, we weren’t going to agonize over it. But we decided that ultimately, he liked acting a lot more than he liked pimping.

[Look for Part 2 of this interview on Wednesday morning.]