Desus and Mero: Out to Lunch With Comedy's Bronx Bombers - Rolling Stone
×

Desus Nice and the Kid Mero have just sat down for lunch at an upscale Manhattan bistro when they notice the birdlike gentleman in the slate-blue sweater a few tables over. Desus sees him first: “Is that John Oliver?”

It certainly looks a lot like the star of HBO’s Last Week Tonight — a funny coincidence for two wiseguys who are about to start their own weekly late-night, half-hour comedy program, Desus and Mero, which premieres on Showtime February 21st. “Yeah, it is,” Mero says after surreptitiously checking out the competition. “Should we jump him, man?”

Desus (a.k.a. Daniel Baker, 37) and Mero (Joel Martinez, 35) have spent the past seven years doing their act for any platform that will have them, from their wildly hilarious Twitter accounts to their highly rated Viceland talk show, which ended last summer after 309 episodes. The premise has stayed the same throughout: Two dudes from the Bronx banter and bullshit about the news of the day, with occasional input from their guests.

That’s all you need, because Desus and Mero possess god-level comedy brains, able to keep the punchlines coming for a potentially infinite length of time without getting any less funny. “Those are my dudes,” says Tracy Morgan, whose appearance on their show last spring was a zany delight. “There’s nobody like them on late-night TV. They’re down like four flat tires, and they’re about the truth. People don’t laugh at lies.”

“Desus and Mero are two of the funniest people I’ve ever met,” adds Ezra Koenig, who cast them in supporting roles in his 2017 Netflix cartoon, Neo Yokio. “Every time we recorded them, I was dying laughing. They’re truly the best improvisational actors. Such natural charisma.”

Take the episode of their long-running podcast, Bodega Boys, that they taped at a nearby studio just before walking here. For 90 minutes straight, they riffed on Kanye West and Drake’s latest feud, Donald Trump’s sex life, reckless Uber drivers and the true meaning of Hanukkah, among many other subjects. Now, lounging in a corner banquette — Desus in an understated black-and-white streetwear T-shirt; Mero, who dresses and talks a little louder, sitting opposite in a hoodie, a Yankees cap and a Jesus piece — they’re still going.

They roast the restaurant’s pretentious menu (“You guys got gyros?”) and the boutique L.A. hotel (“for people who are really into bird-watching and wineries”) where they stayed when Showtime flew them out to see Deontay Wilder and Tyson Fury’s heavyweight fight in December. They roast themselves, too. “This is the most unsexy thing to do on a date,” Desus says as he produces a small white Lactaid pill to take with his coffee. “Yeah, she thinks it’s Viagra,” Mero says. “You’re like, ‘No, this is just so I’m not peeing out my ass in your apartment later.’ ”

Desus and Mero pride themselves on this ability to improvise bits in the moment. “We don’t write jokes,” Mero says. “We’re the Jay-Zs of comedy.” That’s changing for Showtime’s Desus and Mero, where they’ll spend each week producing one tight 30-minute episode, instead of the relatively free-form four-night weekly schedule of their Viceland show. For this, among other reasons, they’ve brought in their first-ever professional writer’s room — an elite team of joke specialists that includes alums of Saturday Night Live and The Onion (not to mention one staffer they poached directly from John Oliver’s show).

Several of the newly hired writers sat in as observers at this morning’s podcast taping, watching and laughing while Desus and Mero did their spectacularly unfiltered ad-lib routine. “Listen, if we took the podcast and put it on Showtime, [network CEO] David Nevins is going to get fired and we’re going to jail,” Desus says. “So we needed to bring in people who have made shows before.”

Heben Nigatu, whose past credits include a stint on The Late Show With Stephen Colbert, describes coming up with material for Desus and Mero as a comedy writer’s dream: “They’re already funny, so all you’re doing is giving them an alley-oop.” She adds that the new Desus and Mero is shaping up to be unlike any other show in its category. “It’s definitely the most diverse writer’s room I’ve ever been in,” she says. “Bless them for doing that. Late-night TV is the same seven dudes, and they all went to the same college. You feel the difference immediately.”

Growing up in the Bronx, where they met as teens, Desus and Mero — first-generation Americans whose parents came here from Jamaica and the Dominican Republic, respectively — listened to tons of Yankees talk radio and Nineties hip-hop, absorbing two flavors of New York knowledge that helped inform their tough-but-graceful comedic style. They joke on the podcast that they spent their prefame lives “smoking angel dust and playing Pokémon” (Mero) and “sponsoring wayward youth” (Desus); in fact, by their mid-twenties, both were holding down boring but steady jobs — Mero as a teaching assistant at his old high school and Desus writing for a website devoted to black entrepreneurship. “I hated that job so much,” he says. “And I didn’t have a show like this to get me through.”

They turned to Twitter as a distraction, firing off profane zingers in between meetings and classes — just like millions of other frustrated office drones in the early 2010s, only much, much funnier. In 2012, they quit their jobs and pivoted to podcasting, followed by a series of gigs on the web and basic cable. Viceland’s Desus & Mero, which began in 2016, put them in front of their biggest audiences yet, but their relationship with the millennial-oriented lifestyle network was fraught. In a spicy exit interview with the gossip site Bossip this summer, Desus and Mero vented about the lack of respect they felt there: “We were carrying that network on our back, and we felt the weight,” Desus reportedly said. (A representative for Viceland was unavailable for comment.)

Over lunch, they wave off all questions about their former employers. “We appreciated our time at Vice very much,” Mero recites in a flat, robotic tone. “It was a great opportunity to expand what we are working on.” He breaks and grins: “Could you tell we signed papers?”

Still, Mero can’t resist telling one story about the time he went to Vice Media’s Williamsburg, Brooklyn, headquarters to retrieve a pair of sneakers he’d left on their show’s set — a space that, he learned, was being used for other corporate functions on days when he and Desus weren’t taping. “They were having a monthly marketing meeting on our set!” he says, laughing. “They were all looking at me like, ‘Yo, what are you doing in this conference room?’ I had to sneak out.”

They’re downright giddy about how much better things are at Showtime, where they have their own Manhattan offices — “We got Xboxes,” Desus says. “We got a pantry” — and a custom set. “Our new set is just one big Timberland,” Desus jokes. “It looks like the old lady that lived in a shoe.” More seriously, he adds, “Showtime cut the check, so we didn’t skimp. We’re used to people saying, ‘Uh …  maybe after this.’ Showtime is coming in like, ‘It’s open bar. Let’s go.’ ”

With its emphasis on scripted humor, sketches and field reports, the new show will be significantly different from their last one, but they do their best to downplay the shift. “When you say changes, people get nervous,” Mero says. “This is just the original show with — what’s that shit called, an annex? Like when you build a separate wing of your house where you can play Nintendo high?” 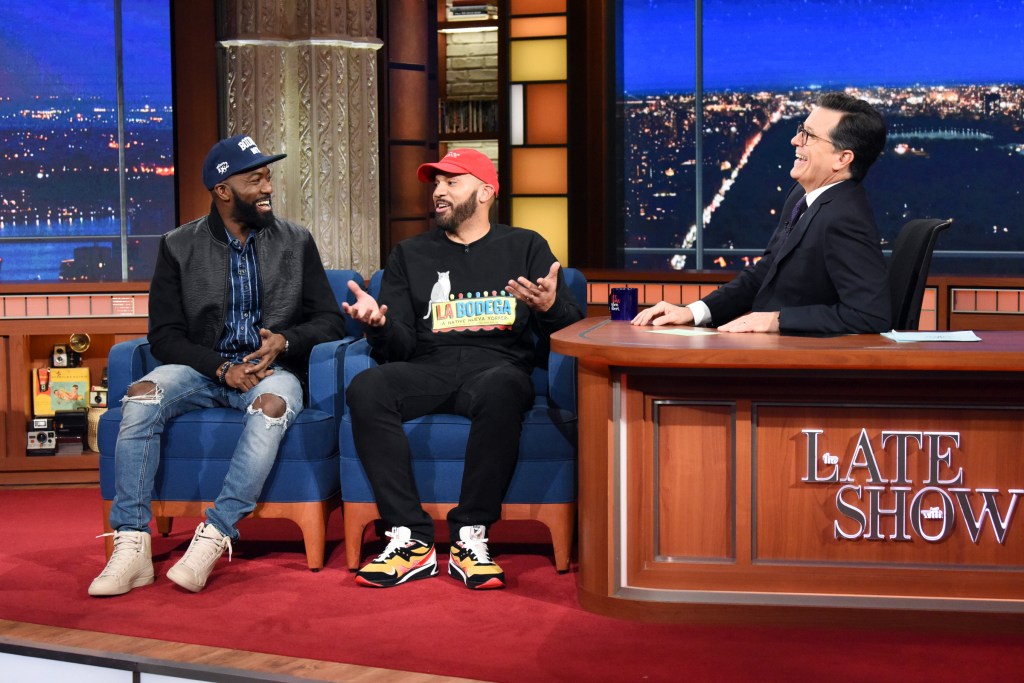 Desus and Mero on ‘The Late Show with Stephen Colbert’ in 2017. Photo credit: Scott Kowalchyk/CBS/Getty Images

Desus suggests that they might bring on Mero’s father as a member of the writing staff. “Speaks no English. Every time we go to the writers meeting, he’s fixing the furnace. I’m like, ‘Do you have a joke, Mr. Martinez?’ ”

As successful as they now are, Desus adds, he’s not entirely sure his own family appreciates what he does for a living. “My parents are like, ‘It’s not a real job.’ I mean, we’re not exactly delivering babies or making oil changes. But it’s a real job to me!”

“Are your hands dirty when you get home?” Mero asks.

Desus is right there with the next line: “They got pretty dirty when I was adjusting the seat in first class, so . . .”

A waitress comes to clear our plates, and Desus and Mero talk about some of the ways they’ve changed since becoming famous. For instance: “Neither one of us has gotten up and beaten the shit out of John Oliver yet,” Desus says. “It’s calling me, though. Would that make the article more interesting, if we smash him over the head, like, ‘Welcome to late-night city’?”

“You think he knows about us?” Mero says.

“That would be embarrassing, if we went over there and he’s like, ‘I have no idea who the bloody hell you guys are,’ ” Desus says.

This is absurd, because everyone knows Desus and Mero: TSA workers at the airport, random people at bodegas, Floyd Mayweather’s bodyguard at that fight. (“He was like, ‘I’m proud of you guys,’ ” Desus recalls. “I’m like, ‘Man, we met you literally three minutes ago.’ ”) They say they often get messages from fans who credit Desus and Mero with saving their lives. “Our track record is proven,” Mero says. “Obama watches our shit.”

Wait, what? Desus nods: “They won’t admit this on record, but they used to play the podcast in the Oval Office. People that worked there have told me that. They love the show. We’re their problematic favorites.”

Life as Twitter’s favorite comedians is good. Both of them recently traded in their old homes for newer, nicer ones: Desus just moved to an apartment in a re-zoned nook of the Bronx, while Mero, who’s married with four kids, bought a house last year on “a dead-end street that they call a cul-de-sac to make it sound fancy” in a New Jersey suburb. “That was Vice money,” Mero says. “Maybe I should have held out. I could have bought C.C. Sabathia’s house if I’d waited for the Showtime money.”

Sometimes, Desus says, he wonders what would have happened if the MTV2 producers who gave them their first TV job in 2015 had chosen someone else. “You could be interviewing two other wingdings,” he says, “and we’d be some haters on Twitter, like, ‘They ain’t that funny. This Showtime show is gonna suck.’ ”

He gets up to use the restroom, then returns to report regretfully that it isn’t John Oliver sitting over there after all — just some anonymous white guy who looks like him. “He’s probably a therapist or some shit,” Desus says. He and Mero are laughing as they walk out to the street.