“Man, look at it out there,”Justin Simien says, gesturing to the window of the hotel suite he’s currently holding court in. It’s early February, and the city has just been hit by a blizzard that feels damn near Biblical; the streets below us, as well as the whole of Madison Square Park, are covered by an endless blanket of eye-blinding white. “It’s like New York has been covered in Trump voters!”

The two stars of Simien’s Netflix show Dear White People who are sitting to his left, Logan Browning and Brandon P. Bell, start belly-laughing along with him. A second ago, they’d all been earnestly debating the pros and cons of attending a standard, integrated state university versus an HBCU (Historically Black College and University); one weather-related wisecrack from the writer-director later, the three of them are riffing on the troll-term “snowflakes” and joking about renaming the show Dear Woke People. It’s the sort of yes-we-are-going-there humor that made Simien’s feature-film comedy about college campus politics stand out from the Sundance pack when it took the festival by storm in 2014. For those worried that the TV version (which starts streaming on the service today) would tone down the take-no-prisoners attitude, rest assured: If anything, the racial-satire razors have become even sharper the second time around.

And though we rejoin the incendiary college radio D.J. Samantha White (Browning), the handsome buppie-to-be Troy (Bell, reprising his role), the gay muckraking journalist Lionel (DeRon Horton) and other students of the fictional Winchester University, Simien is not delivering an Obama-era period piece. He’s clearly weaponized Dear White People‘s skewering of identity politics, ideological stand-offs and the stunning
ignorance that’s become the War Over Diversity’s stock-in-trade for the here and now. “The movie came out of that post-racial bubble we were in, where we all thought we’d solved the problem,” he says, shaking his head. “We are clearly not in those times anymore. So yeah, I wanted to stick with these characters, but let’s move the story forward. The movie ended with seeing a bunch of kids throw a blackface party – and while that’s fucked up, that’s not the most alarming thing I’m seeing going on in our country at the moment.

From the moment the former film publicist came up with that title – derived from an in-joke between Simien and a colleague that morphed into a popular Twitter account – he knew he’d stumbled on to something that, as he outlined in a recent Medium essay, would attract both attention and controversy. But he also knew the movie would spark a lot friction-filled but often fertile dialogue at real-life universities, something he saw firsthand once he started showing the film at colleges a lot like Winchester. Though he was taking meetings about other potential projects after Dear White People hit theaters in late 2014, he kept circling back to the idea that, based on what he was hearing in those often heated, occasionally healing discussions on campuses, there was more to be said with that setting. Even before Netflix approached him about developing a series around DWP in 2016, he’d been kicking around the idea of finding out “what happened next” with these characters.

“In a weird way, I always sort of thought it might have to end up on TV,” he admits. “Partially because I wasn’t ready to say goodbye to these people. But mostly, I was seeing and hearing so much stuff when I was listening to these students that I thought, we need more than two hours to dive into this. It’s such a great starting point for a TV show, because college is a great microcosm for the country: You’ve got every segment of society represented and you’ve got the next generation figuring out where they fit in to society.

“Plus all of the issues that are happening around the nation are occurring in a much more charged and contained environment in college,” he continues. “Everything feels so life or death when you’re a 20-year-old debating this stuff, figuring out where you fit in. How do you talk about black activism and the idea wars and trolls and all that stuff without shooting somebody staring at their phone for hours? You put the characters on campus.”

And you give all of them lines that match the smart, sarcastic, torn-from-today’s-Twitter-feed commentary that characterized Dear White People‘s original incarnation, updated for the current moment. Though the 10 half-hour episodes revolve primarily around one of the show’s many main characters, anyone might step up and solemnly intone that “Black hair matters” or gush that “your think piece about think pieces on think pieces is brills!” (An unknown partygoer who, in the middle of a heated argument about why white people shouldn’t sing the N-word, states “we need to do what they did in Germany!”, i.e. educating the populace about the nation’s shameful past. The outraged response from the crowd is priceless.) “Justin never said to watch the original movie,” Browning says, regarding her stepping into film actress Tessa Thompson’s shoes to play the small-screen incarnation of Sam. “He asked me to watch Network, because he said it was not just an incisive satire but that its tone is so fast and furious. You know, don’t try to repeat my movie. Aim for that instead.” 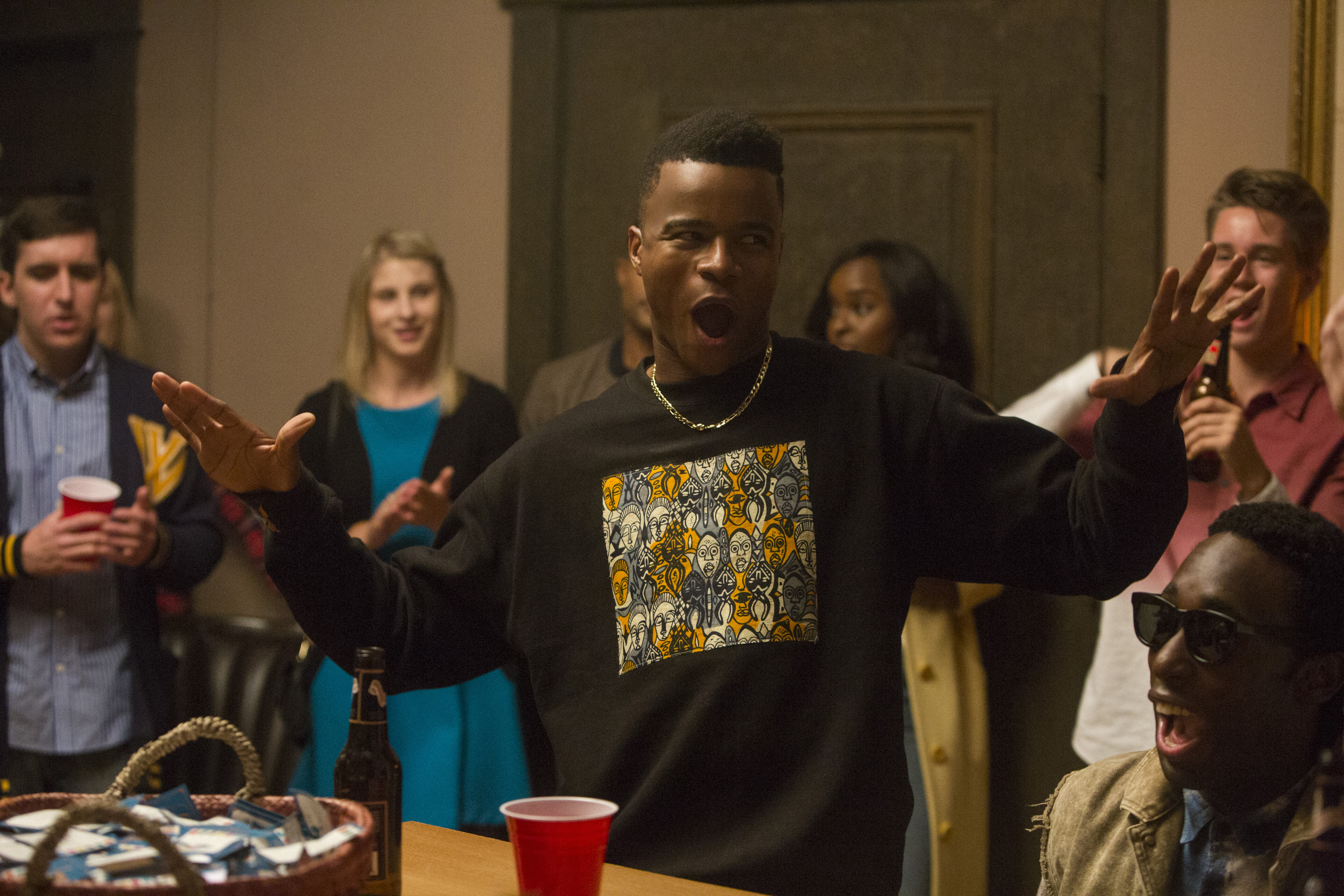 Which didn’t mean that Simien and showrunner Yvette Lee Bowser wanted to simply lob rapid-fire snark bombs at casual racists, fresh-faced firebrands and Scandal (DWP‘s parody of the Shondaland series, Defamation, is deadly). During an episode directed by Moonlight‘s Barry Jenkins at the season’s halfway point, that aforementioned argument over rap sing-along do’s and don’ts ends with a white campus cop pulling a gun on an African-American student named Reggie (Marque Richardson). The repercussions don’t just shadow the remaining episodes; you’re suddenly reminded, should you have forgotten, that this broad satire takes place in the same world we live in, the one that gave us “Hands Up, Don’t Shoot” and BLM and a Klan-endorsed President.

“The summer we came out of, the tragedies, the movement, the political campaigns – it definitely affected what we wanted to do,” Simien says. “The writers and I were listening Malcolm Gladwell’s podcast Revisionist History every day, bringing in news items to the table. Our last production day was November 8th … it wasn’t until we were literally finishing the show that we realized Dear White People would be coming into an America that was different than we thought it’d be.”

He takes a deep breath before he speaks again. “But look, things have gotten worse and they’ve gotten more honest. Our new President have given bigots permission to vocalize freely, and I’m glad they’re pointing themselves out. I think that’s actually very helpful for the rest of America that maybe doesn’t have the advantage that black people have of noticing every day that yes, these people are indeed there.” (A few days after we talk, Netflix will release the show’s first trailer and end up spurring alt-right accusations that the series promotes “white genocide.” Simien responded to the controversy on Facebook, saying “To see the sheer threat that people feel over a date announcement video
featuring a woman of color (politely) asking not to be mocked makes it
so clear why I made this show.”)

Simien knows his show isn’t going to shore up the divide our country faces regarding its centuries-old inability to reconcile its racial strife; if Dear White People forces someone to start thinking about the conversations we’re not having about race circa 2017 in between laughs, however, he’ll feel like he’s come close to achieving his goal. He mentions the fact that, comedy or not, it’s no coincidence that James Baldwin’s quote about how the paradox of education – “as one begins to become conscious, one begins to examine the society in which he is educated” – is the first thing you see when the series starts. “Baldwin also talked about coming back from living overseas and having to adjust to being black in America,” Bell points out, “and all of the characters are sort of going through the same thing, to a lesser degree. They’re trying to figure out how to be black in America right now.“

“And they all disagree,” Simien adds.

“We’re all gonna need country-wide counseling therapy after this show,” Browning jokes, to another round of raucous laughter. “America, it’s gonna be time for group therapy. File on in.”