Maybe you heard about it from a friend, someone who’d stumbled across a random episode late one night. Maybe you knew someone from the U.K. who’d been crowing for years about this thing they’d caught on TV, something to do with brain-chips and recorded memories and a nightmarish sense of dread. Or maybe someone texted you, or DM-ed you, or posted something in your social media feed about this show that was tapping into the collective fear that it’s all one click away from coming apart at the seams. Regardless of how it first came across your radar, your reaction was probably the same as many, many others: What the hell is a “black mirror”? And then, slightly later: How can I see more of these?!?

Charlie Brooker remembers these questions being asked when his British anthology series Black Mirror – think of the omnipresent screens of your smartphone, laptop, tablet and, yes, TV that can double as a dark reflective surface – first started to find its way outside of its home country. “The idea was that we were making a colloquial little show, not an international one,” the 45-year-old writer-producer says, tucked into the corner of a hotel couch in Toronto the day before he’ll introduce two episodes at the city’s film festival. “We never thought anyone outside of England would ever know about it, really. Then somehow, it was shown in Spain, and then in Australia … and then you’d start hearing whispers about film and TV industry folks in the U.S. who’d found out about it. People were seeing it surreptitiously. It was like contraband.

“But the tipping point,” he continues, “was the end of 2014. We were doing a Christmas special, and Jon Hamm, who we’d heard was a fan, was coming over to film it. He’d tell people, ‘I’m going over to England to do Black Mirror,‘ and they’d go, what the fuck are you talking about? But when he’d finished shooting, Jon says he went back to the States, and suddenly all of those people were asking him, ‘Hey, so have you heard about this show Black Mirror? It’s incredible!'” Brooker grins and rubs his hands together. “We’d gone viral.“

Like a pirate transmission beamed in from some worst-case-scenario future, Brooker’s chilling, cautionary-tale collection presented a place where technology had wreaked havoc and warped people’s consciousness; the fact that the show’s dystopias only felt one tiny step removed from our current tech-dependent world only made them that much creepier and unsettling. The first two seasons’ irony-rich parables, involving dead loved ones reconstructed from old online correspondence (“Be Right Back”), the ability to replay scenes of your life at will (“The Entire History of You”) and a woman mysteriously being pursued by passive crowds (“White Bear”), immediately tapped into something primal regarding to our culture’s love-hate relationship with the gadgets vying for our attention. The fact that it was Netflix’s streaming of the series that introduced most of America to Black Mirror only made the show’s themes more resonant, Brooker says – and the idea that cutting out a network middle-man and going directly to Netflix for a third series, which the service will release on October 21st, that much more attractive.

“I had been impatient to get the earlier seasons up there, originally,” he admits, “because when you think about it, Netflix is an ideal home for Black Mirror. It’s an anthology show, so you can watch it whenever; and it’s on a streaming service, which is a disruptive technological agent. So when they expressed interest in doing a third season with us, it felt right. It’s still very much business as usual – two of the new ones take place in England and feel like they could have been from the BBC run. What we have done, however, is give the series a bit more variety. We didn’t want it to be just six more episodes of, you know, a guy downloads an app and his life is ruined.”

Although Brooker had taken full advantage of his comedy background (he was the writer behind the BBC satire Brass Eye‘s single most infamous special) in Black Mirror stories such as the Prime-Minister-meets-pig episode “The National Anthem,” he was admittedly keen to switch up tones and genres for this new batch. (“Ideally, it would be one episode that makes you want to slit your wrists,” he jokes, “then the next episode males you want to sew them back up.”) Fans will still get characteristically nerve-jangling, we’re-all-doomed tales like “Shut Up and Dance,” which the showrunner claims is “possibly the bleakest thing we’ve done.” But they’ll also get what he terms some “rather playful” episodes, as well as a detective story (“Hated in the Nation”), a sort of sideways 1980s coming-of-age story (“San Junipero”) and “Nosedive,” which Brooker describes as “a social-satire romcom meets Planes, Trains and Automobiles.“

In fact, if you had to gently indoctrinate someone into the Black Mirrorverse, that last one, starring Bryce Dallas Howard as a upwardly mobile woman negotiating a world in which every interaction gets a zero-to-five star rating – and your overall rating determines your social status – would be the perfect introduction. Like a lot of episodes, the genesis of the idea started as something completely different; unlike most Mirror installments, Brooker says, he was willing to bring in outside help, enlisting Rashida Jones and Parks and Recreation co-creator] Mike Schur to flesh out the idea.

“It was originally more of a Brewster’s Millions type of story, in which” – the showrunner affects a deep, in-a-world narrator voice – “it’s the future, everyone’s reputation is quantified in some way, and someone is being blackmailed to reduce their number to nil within 48 hours. It was a good concept, but I didn’t know how to crack it: I mean, after you’ve had your hero shout something racist and shit outside of a primary school, he’s destroyed his reputation in two minutes and what’s left? So I sat on it for a few years, and it wasn’t until I took an Uber that I realized, ‘Oh, there are ratings for drivers and customers? Hmm, what does this remind me of?’

“What we have done is give the series a bit more variety. We didn’t want it to be more of, you know, a guy downloads an app and his life is ruined.”

“We knew Rashida loved the show,” Brooker continues, “so we reached out to her, and she brought in Mike, and set up a long-distance writing room, which was unusual for us. I tend to get very Taliban-ish over the scripts and storylines, to be honest” – he clutches an imaginary script to his chest, widening his eyes and hissing like Gollum – “but they were able to mutate this into something that feels more along the lines of what we do.”

“I’d been having these recurring nightmares for years,” Howard confesses later, after Brooker has left to introduce a festival screening. “Really horrible ones that took place in these dystopian futures. I have no idea why, but I’d gone to hypnotists and therapists, and nothing seemed to help me get rid of them. I’m a huge The Twilight Zone fan, so people had been telling me, ‘Oh, there’s a British show you have to check out.’ Anyway, I’m New Zealand by myself for a week, and I figured, well, I might as well take a look. I turn it on – and it’s just like my nightmares. I mean, this is exactly what they look like. I called my husband up and told him, ‘Help me, I’m genuinely freaking out over here!’

“But wait, it gets better,” the actress says, laughing. “I send this tape to my therapist back home, and tell him, ‘You’re not going to believe this, but I’m thousands of miles away, I’m watching this show, and it’s literally like the nightmare I told you about. It’s causing a trigger right now … I feel like I’m going into a nosedive.’ That was my exact wording. And then, maybe a year later, [director] Joe Wright sends me an outline of a script, and I see the name of the show written on top, and then the title of the episode: ‘Nosedive.’

“I mean, how Black Mirror is that?!” she adds. “So, you know, at that point I had to do it. And I have not had the nightmares since.” 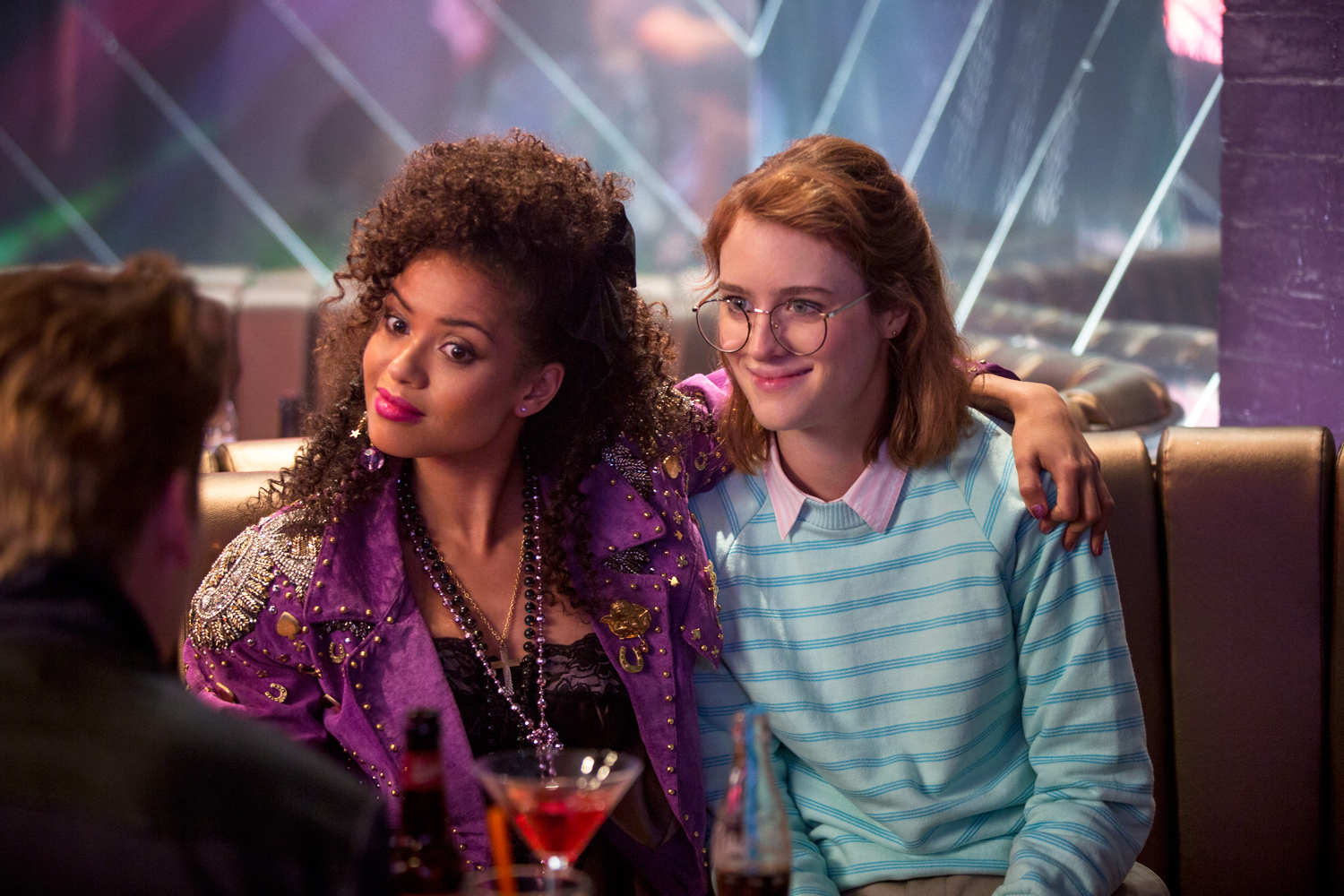 Whether Brooker’s master plan involved craftily incepting one specific person’s bad dreams or just projecting the overall collective fears of our current plugged-in-24/7 zeitgeist, he’s clearly mining something deep-seated in everyone who’s currently checking their iPhone more than a dozen times a day, i.e. almost everyone.

“The funny thing is, people think I’m a huge technophobe,” he says, “and that well, the show must be written by the Unabomber, because look how negative it is about this stuff. I used to be a video-game journalist; I’m as obsessed with technology as everyone else. And while I have a very yin-yang relationship with it, constantly bouncing between being pessimistic and optimistic, it’s not like we’re sitting around going ‘OK, Pokémon Go, what’s the Black MIrror version of that?’ More often than not, it’s us coming across a notion, pushing it just a little further, and going, ‘That’s fucking hilarious. Let’s write that.’

“I mean, you can moan about social media all you want,” he adds, “but it’s like moaning about speech. It’s already here. It’s just now that, as a species, we’re learning to deal with the power aspect of it. We have the ability to create amazing, miraculous tools. Then either by accident, once we discover there are consequences that we hadn’t realized, or on purpose of they get in the hands of someone angry, malicious or weak, suddenly … all hell has broken loose. It’s more that I’m a natural worrier. That’s really my problem. I don’t worry about technology. Black Mirror is me worrying about us.“