It didn’t take long after Anissa Weier and Morgan Geyser were arrested in suburban Waukesha, Wisconsin, for the local crime story to become a national obsession. In late spring 2014, Weier and Geyser, both 12, stabbed their friend Peyton Leutner 19 times and left her for dead. After the two were caught walking down the side of a highway a few hours later, the girls told police they had done it to prove their loyalty to “Slender Man,” a mythological bogeyman whose crowd-sourced legend had been making its way around online forums for several years. Now that they’d completed their mission and become his “proxies,” they could ascend to his palace in the woods. Or so the Internet had told them.

Slender Man: From Horror Meme to Inspiration for Murder

The case was terrifying – especially to parents – not only because it showed just how a developing (albeit troubled) brain could seriously misinterpret a story from the Web, but because in Wisconsin, offenders as young as 10 enter the adult system when charged with first-degree murder. A character that had been created as part of a Photoshop contest in 2009 had inspired these girls to nearly murder their friend. Now they were now facing life in prison.

Their story is now the subject of the new HBO documentary Beware the Slenderman, which premieres on January 23rd. Using extensive footage of the girls’ interrogations, interviews with their families, friends and former teachers – as well as a deep-dive into the Slender Man legend itself – director Irene Taylor Brodsky weaves a nuanced picture of the girls and how they found themselves hurting their friend to please a meme.

At the time of the stabbing, HBO had been working with Brodsky in developing a film about the way Internet technology was changing the pre-adolescent brain – but it wasn’t gelling. “I was coming up with something that felt like a really interesting PBS Nova special,” she says. “It wasn’t the film that I wanted to make.” So when producers Sara Bernstein and Sheila Nevins came across a New York Times story about the stabbing, they emailed it to Brodsky immediately. “What really compelled us about that case was how the girls blurred fantasy with reality,” Bernstein says. “And that notion of, as a parent, can you really police what your children are watching online?” 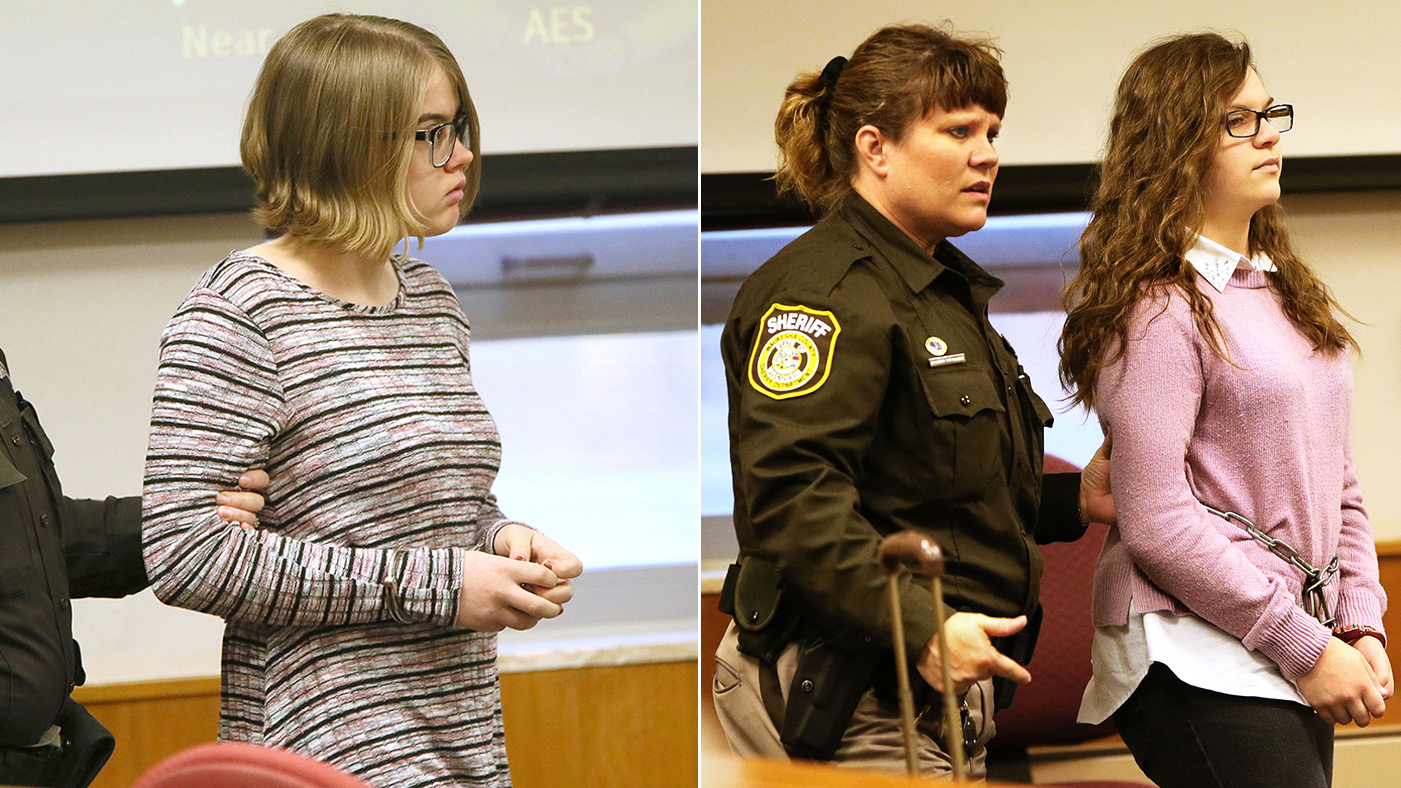 Brodsky first arrived in town just days after the stabbing – in time to see the girls’ first court appearance – but she waited for the media blitz to die down before approaching the Geyser, Weier and Leutner families, respectively. (Leutner survived the attack.) She let them know that she was going to be in town periodically and would love to talk with them; the director also sent them each a selection of her previous documentaries, like a 2007 film about her deaf parents, Hear and Now. By August 2014, Brodsky had gained the trust of the Weiers and Geysers, and started to accompany them through their daily lives as they coped with their daughters’ imprisonments and looming trial.

The Leutner family declined to participate, and their perspective and struggle is mostly left out of the film. “Obviously I would have brought that whole element into the story if I had more insight on it,” Brodsky says, noting that their absence helped shape the film in a different way. “It gave me an opportunity to really go very deep down the rabbit hole – not just of Slender Man and the Internet, but the mindset of these two girls.”

And simply trying to understand these girls horribly misguided decisions makes for a compelling film – from questioning whether this would have happened had they been part of a larger group of friends, to watching parents cope with the guilt of what their children had done. In one scene, Weier’s father, clad in a Superman T-shirt, becomes adamant as he describes the kind of hands-on father he is. He always knew what was happening on his daughter’s iPad, and bedroom doors stayed open at all times. Yet strangers have repeatedly attacked him online for not knowing what was going on in his prepubescent’s head. “Apart from sitting in the corner,” he tells Brodsky, “and watching every move she makes, I don’t know how much more involved I could have been.”

The parents of Geyser struggle with an additional kind of guilt: After the stabbing, a psychological evaluation showed that Morgan is schizophrenic. Morgan’s father, Matt, has schizophrenia as well; though he’s highly functional, he and his wife, Angie, admit in the film they knew that there was a possibility Morgan would be ill. Yet, as Morgan’s grandfather says to the camera, “None of us saw this coming.”

While the film Brodsky made is primarily the story of the stabbings, it’s also the tale Slender Man itself. Created as part of a scary-story contest in 2009, the phenomenon is one part Brothers-Grimm bedtime story and one part ice-bucket challenge, as the legend has been assembled by fans from 4chan to YouTube using video games, fan fiction and doctored videos to weave a truly global character. It caught on so quickly because the idea is simple and easily replicated: make it tall, skinny, suited and faceless, and it’s instantly recognizable as Slender Man. It’s a classic example of a meme – a word coined in 1976 by evolutionary biologist Richard Dawkins, who Brodsky also interviews in the film – or something that is passed across a culture and evolves as it goes. “Genetic viruses spread from body to body,” he tells her via Skype. “And so a meme that has great spreadability deserves to be called a virus of the mind.” This virus just affected Anissa and Morgan in an altogether different and terrifying way.

In fact, Beware the Slenderman makes a direct tie between the meme and fairy tales that have been passed from generation to generation – particularly the Pied Piper. These are dark, often cautionary tales that morbid preteens adore. Yet this new strain is different – they’re interactive, changing and morphing and mirroring the fears of the child that goes looking for them. “These stories are talking back to our children,” says Bernstein. “You can have somebody on the other end of a chat-room, a website, Facebook, talking back to your child as if they were Slender Man. And that makes it so much more real to them.” 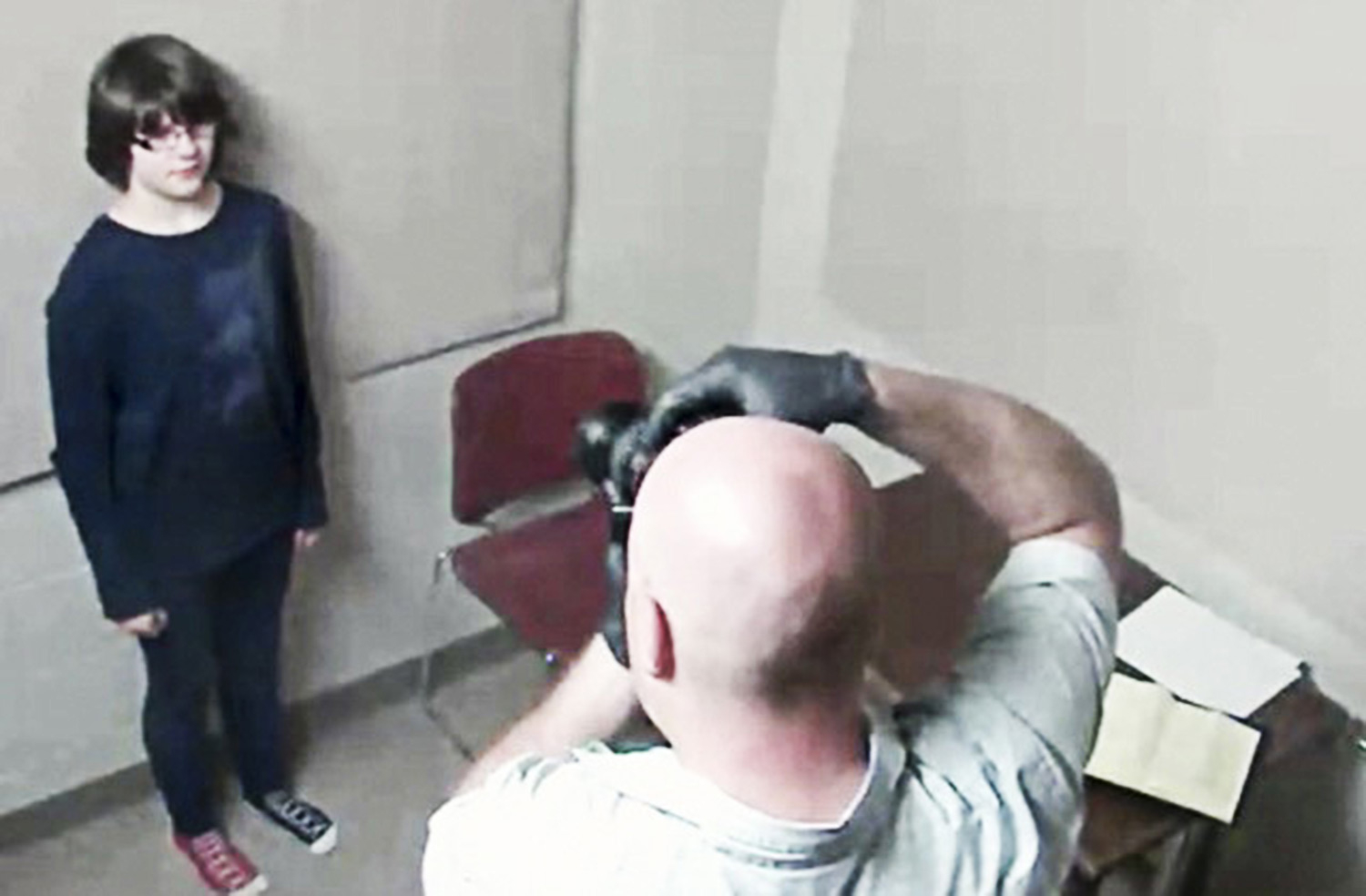 What’s most shocking to Brodsky is that, given the age of the children and the real scientific questions behind what technology does to a developing child, this case was allowed to proceed this far in the first place. “We know the brain is not really fully formed until 25,” says Brodsky. “And in the state of Wisconsin, you’re in adult court from 10 years old on. I live in Portland – if this had happened in Oregon, you and I would not be on the phone. It would be the kind of thing that district attorneys and public defenders were talking about over drinks at happy hour.” Instead, the girls are set to enter adult court on murder charges later this year.

Born in the early 2000s, Morgan and Anissa were raised alongside the Internet, constantly followed by smartphones, so the story of their childhoods is largely told in the film using clips of them petting cats or singing songs into laptop cameras, and by their comments on sites like YouTube. But an even bigger part of the documentary is the video is of them in the Waukesha police station mere hours after the stabbing, being interviewed individually as they shiver under state-issued blankets. “I felt like I was spying on them,” Brodsky says of the footage. “This is right after they had committed this almost inconceivably, intimately violent attack. But now they were in this room, and they didn’t know if their parents [even] knew where they were.” One of the first things that Anissa asked during the interrogation was if she would get to go to school the next day. “Her ability to realize how much trouble she was in was very diminished,” Brodsky says. “And that, to me, just shows you she’s a kid.”

Brodsky, the families and their lawyers had discussed interviewing the girls for the documentary, and “it was agreed by all the parties involved that it was not a good idea,” says Brodsky. They decided instead to tell the story with the found footage they had. “The material we do have tells us so much. And in a way – just like Slender Man – it’s almost scarier because you don’t know what’s behind the mask.”