Last year, American Vandal arrived on tiptoe, a barely promoted gift from the Netflix gods that had fans wondering, “Who drew the dicks?” One easily could have mistaken its mockumentary format for a real investigation into a high school prank that resulted in the wrongful expulsion of class clown Dylan Maxwell (Jimmy Tetro). “I was speaking to someone we recently staffed in the writers’ room who said it took him four episodes before realizing these were actors,” says Dan Perrault, who created the true-crime parody series with Tony Yacenda and executive producer Dan Lagana. “We didn’t want this to feel like a conventional mockumentary.”

The now-streaming second season takes a darker turn, inspired by recent documentaries like The Keepers, Shadow of Truth and The Central Park Five. Teen filmmakers Peter Maldonado (Tyler Alvarez) and Sam Ecklund (Griffin Gluck) have been tapped to investigate another mystery, and this time there’s no gimmicky tagline. It’s about poop — and lots of it. Someone poisoned the lemonade dispenser in the cafeteria of the prestigious St. Bernardine High in Bellevue, Washington, resulting in an awful (and awfully disgusting) incident known as “the brownout.” The scatological crimes continue until Kevin McClain (Travis Tope), a pretentious oddball with a fondness for newsboy caps and tea, is identified as the so-called Turd Burglar, accused of taking revenge on classmates who once saddled him with the nickname Shit Stain McClain. But Peter and Sam aren’t convinced that Kevin is the angry outsider that school administrators have pegged him for. Instead, they focus their lens on African-American star basketball player DeMarcus Tillman (an incredibly charming Melvin Gregg), who is equally isolated, but for different reasons: He’s become a deity to a bunch of privileged, mostly white kids with whom he has little in common.

Fox Nation Host Decides Hanukkah is the Right Time to Compare Dr. Fauci to a Nazi

The series’ humor is again rooted in the granular level of investigation, which this time around examines iPhone glitches, cyberbullying, bar mitzvah bands, amateur athletics, a hot janitor and one teacher’s obsession with Kurt Vonnegut. But much like the first season, the eight episodes also shed light on teenage pathos, faculty malfeasance and various inequities within the high school ecosystem. “We try to create a genuine mystery but also a genuine look at what it means to be an adolescent in 2018,” says Yacenda, who, along with Perrault and Lagana, chatted via phone about the series’ true-crime roots, their own teenage experiences and the deeper meaning of number two.

Did you worry that the parody format would lose its novelty the second time around?
Dan Perrault: Honestly, before we started filming the first season, we were concerned about how long the true-crime genre would be popular. But true crime is as big as it’s ever been, and it’s not going anywhere, thankfully. There’s an endless supply of tropes.

Dan Lagana: All we really set out to do was evolve between seasons. We wanted to justify our existence in the landscape. We’re so grateful that so many have said that they like our second season more than our first.

Getting down to business, so to speak: Why all the poop?
Tony Yacenda: We wanted to make our second season darker, and a lot of true-crime documentaries start with these really brutal images of blood and mutilated bodies, which elicit a really visceral reaction. What’s the funniest version of that? Poop. It’s a horrific thing that makes you want to look away.

Did you discuss whether the visuals would be a turn-off? Or run the idea by any other gender, perhaps?
Lagana: That sounds like a leading question! The truth is we didn’t. We were set on poop.

Yacenda: We never let that stuff police us too much. That’s always our approach — to come up with a really dumb initial premise and from that point on take it as seriously as possible. And, at the end of the day, poop really makes us laugh.

Everyone went to school with somebody like Dylan Maxwell. Do you think Kevin McClain is as universal a character?
Yacenda: The difference between the two is that I think everybody’s version of their Dylan Maxwell was similar. They smoke weed and make Jackass-style videos. But everybody’s version of Kevin McClain is so different. The specifics are going to vary. It’s not always going to be tea. In one draft it was like, Is he really into pocket watches? But they’re all coming from the same place.

Perrault: I’ve heard a lot of people say Kevin’s more universal. High school is a time where if you can’t fit in, you try to craft a personality to make it seem like it was your choice not to fit in. That’s my personal experience.

You were like Kevin? Please elaborate.
Perrault: It’s super embarrassing and awful. Basically, one true element in the show is that Kevin went from a 35-person birthday party in fifth grade to a six-person party in sixth grade, and that was me, too. I had the best 11th birthday party —

Lagana: Dan, Dan, Dan. Don’t tell this story! He had something very similar happen. I think we should leave it at that. 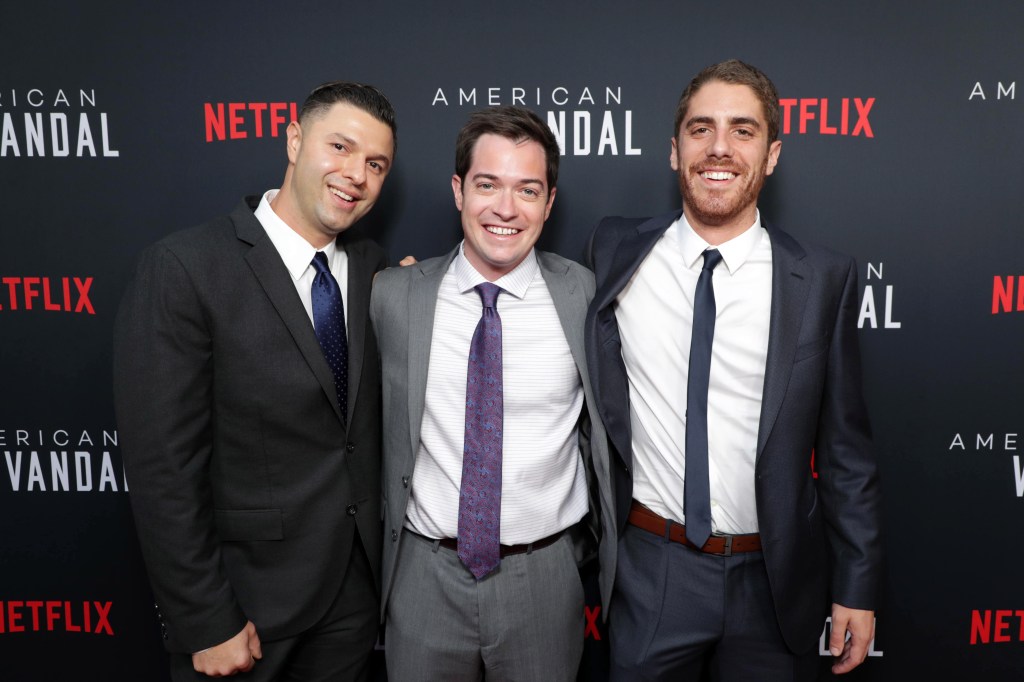 The first season eventually revealed a poignant backstory, with Dylan being someone who slipped through the cracks and was written off by the faculty. This season touches on bullying, race and the way school athletic programs can gloss over socioeconomic differences. Why these issues? How did you decide the story behind the prank?
Yacenda: We wanted to pull from all different parts of the social hierarchy. We had this idea that people use social media to curate a personality and hide deeper insecurities. Who’s held in higher esteem? Who’s more of a god in today’s society than the blue-chip high-school basketball recruit? Everybody wants to be DeMarcus Tillman’s friend and that’s got to be as alienating and tough to navigate as somebody who had their own Shit Stain McLain situation. So the crime led to fleshing out these characters, which led to these conversations about class — as opposed to the other way around.

We’re finally getting art from the perspective of younger people who’ve been raised with social media, and who don’t see it as cause for the same alarm that many adults do — like Bo Burnham’s Eighth Grade. Have you learned anything surprising from working with a young cast about how they view its role in their lives?
Yacenda: So many interpretations of adolescence in television and movies delineate cliques, like the jocks and the nerds and the goth kids. I think that was truer in the Eighties, when The Breakfast Club was made, but from what I’ve learned, it’s lame to be in a group or a clique now. They want to create an aesthetic — they use that word all the time. It’s coming from the same sense of trying to belong, but everybody’s really stressing individuality.

The ancillary talking-head interviews are some of the best parts of this season. Is it all scripted, or do the actors improvise and bring ideas to the table?
Perrault: We script a lot of it but sometimes we’ll say “put this in your own words,” because the last thing that we want is for it to sound like individual punch lines. Most of the supporting cast are Portland actors and we couldn’t be more thrilled with them, because it’s such a huge part of the storytelling this year. We preferred to tell the stories of the poop crimes from the people who experienced them.

Did you consider starting over with an entirely new cast, or did it feel crucial to keep the characters of Peter and Sam?
Perrault: From the start, we considered Peter and Sam our through line for each season in the same way that Sarah Koenig and Dana [Chivvis] are the mainstays of Serial. They’ll never be our primary story arc but those characters grow more interesting over time because the more notoriety they get, the more access they have.

How would you describe your own relationship with true crime?  Is your enjoyment complicated by the tragedies at their core?
Yacenda: They’re all sad. [But] I don’t think it’s that complicated. We’re genuine fans. I feel like documentaries as a whole are getting so much better. They’re becoming so mainstream. We watch them and get sucked in and appreciate all the ways that they’re able to manipulate the audience with editing, music and all these different tricks that make us care about real people that we’ve never met, and the injustices that they face.

Lagana: And you don’t know what’s going to happen. In a landscape with so many shows, audiences start to feel like things are potentially getting too predictable, so it’s helped us broaden our definition of narrative.

Yacenda: For instance, in The Jinx, you don’t learn about the Susan Berman murder until halfway through the season. And for our purposes, the thought was: If we use those conventions as earnestly as these documentarians do, and go into that tool kit in a way that’s not making fun of them, can we get you to care about dicks? I don’t think there’s ever been a TV comedy in which the funniest character is intentionally held out until the third episode. But that’s something that happens in documentaries all the time, because that happens in real life.

But in Season One, Peter grapples with what his revelations have wrought on the school community, which felt similar to how Sarah Koenig felt after Serial first debuted and a lot of amateur sleuths took to the internet to pick apart real people’s lives.
Yacenda: Serial was a touchstone for Season One. We owe so much to Sarah Koenig for kind of reinventing the way an unreliable narrator can take us through a mystery. The thing that is so unique to me about her is that she didn’t present herself as an unbiased authority. She said, Help me figure it out. And maybe that inclusive, play-along element is what led to some of the amateur sleuthing. But to us it’s also such a fascinating way to tell the story. It gets an audience engaged.

Do you think this series could go on indefinitely? Can Peter and Sam go to college?
Yacenda: Right now, we’re really focused on coming up with a great third season. I think there are so many stories to tell about high school kids, and so many different documentary tropes that we still haven’t played with, so we do think it could go on for a few seasons. But we don’t want to rush anything, because we want to make sure we have a completely new, fresh take.

Have you heard about any copycat crimes?
Yacaneda: People have been drawing dicks since the beginning of time, so I’m not sure we can take credit for that, but I really hope nobody copies this season.
Lagana: Don’t blame us. We didn’t make poop funny.