The creators of American Gods have many stories to tell you. One of them goes something like this.

Once upon a time, an author who was not from this country came over to America to live. He found it a strange, wonderful, fascinating place, and eventually wrote a book about the various pasts, presents and futures this land contained. Many people loved it, including a man who’d made an eye-popping, groundbreaking TV show about a serial killer and a screenwriter who penned scripts about the death of a superhero and the rebirth of a replicant hunter. The duo decided to adapt this novel into a series, even though a legion of folks thought it was impossible. Still, they persevered. The author approved. The gods of TV programming, who were also pleased, favored these gentlemen with a Sunday evening timeslot on a premium-cable channel, the highest blessing they could bestow.

'American Gods': Everything You Need to Know About 2017's Trippiest TV Show

And that is why someone stumbling across Starz last night would have seen a woman suck a grown man completely into her vagina.

Readers of Neil Gaiman’s 2001 cult novel know this scene intimately from the book, which follows an ex-con named Shadow and a con man named Wednesday who are caught in the middle of a war between the old deities of immigrant cultures (your Odins, your Anubises, your Czernobogs) and the modern messiahs of technology, media et al. But even those who tuned in to Bryan Fuller and Michael Green’s long-awaited TV adaptation of American Gods, which kicked off its inaugural eight-episode run on April 30th, and expected something like an opening prologue that resembles Game of Thrones on acid – they probably didn’t think Gaiman’s sequence involving an ancient fertility goddess named Bilquis swallowing her lover would survive the transition to the screen. The fact that the series presents this mind-blowing moment in its very first episode tells you that the people behind this weird, wild, warped fantasy-cum-road-movie TV hybrid are not kidding around. 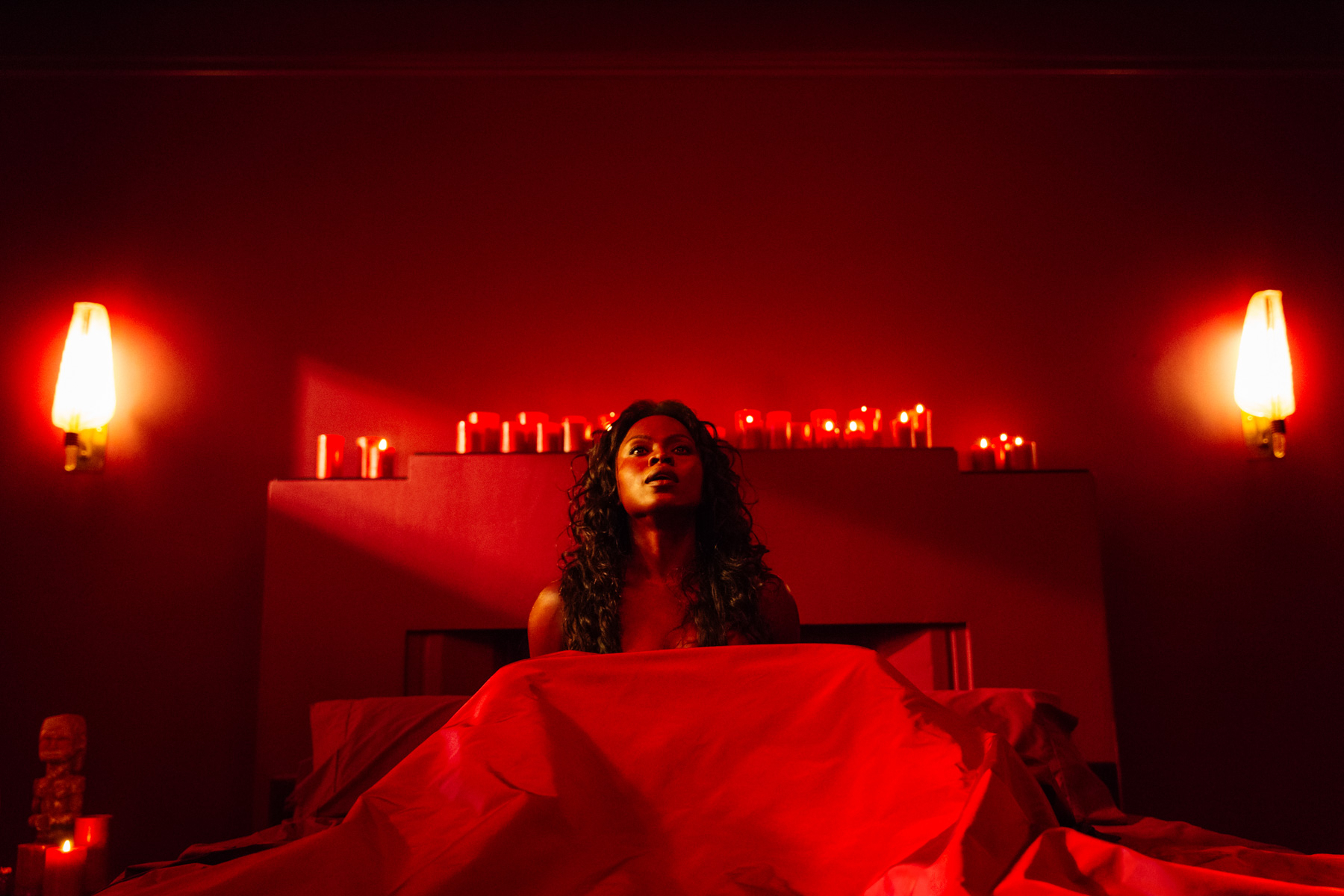 “For most producers, that would have been the first thing they cut if they were making this, but they’d be missing what makes the book work,” Green says, to which Fuller, sitting next to him, gleefully adds, “Yeah, fuck those assholes!” The two showrunners, who first worked together on the NBC show Heroes back in 2006, had been busy with their own projects – Fuller was deep into his baroque re-imagining of Thomas Harris’ cannibal gourmet Hannibal, and Green was working on scripts for the revisionist X-Men blockbuster Logan, the upcoming Blade Runner reboot and an all-star take on Agatha Christie’s Murder on the Orient Express. But they had been meeting up for long sushi lunches regularly to talk shop, and were on the lookout for something they could collaborate on.

Then, while Fuller was filming in Toronto, he received an unexpected guest. Neil Gaiman had been talking to folks at FremantleMedia, who were interested in developing his book as a TV series. He’d heard this rap before – an on-again, off-again attempt to adapt the novel for HBO had ended up going nowhere – but this felt like the company were willing to push the envelope to make this happen; besides, longform, small-screen storytelling that could detour into previously unknown territories was beginning to hits its stride. The author starting talking to networks and settled on Starz; now it was just a matter of finding someone who had the right sensibility. And it just so happened that the Hannibal writer-producer was a bona fide Gods-head.

“We met in a hotel lobby,” Gaiman recalls, “and he said, ‘I’m such a fan of the novel … I have no idea how I’d make it into a TV series but I do know that I’d want to get all of the stuff I love in there.’ And I thought, he’s our man. He wasn’t slick about it. And then he brought in Michael, and the two of them kept saying, ‘This show is like we’re writing American Gods fan fiction.’ But it’s fantastic fan fiction! And the author loves it.”

“Trying to explain the show in a single logline is impossible. But Bryan [Fuller] came up with ‘Clash of the Titans by way of The Grifters.‘ And that’s as good a way to describe it as any.”–Showrunner Michael Green

So while lots of Fuller and Green’s personal “stuff [we] love” survives the trip from page to screen – the Salim and the Jinn interlude is present in all its homoerotic glory, as is the book’s fire-eyed buffalo oracle – they have also played around with the timelines and extended the presence of some characters to flesh the show out. It’s still the story of Shadow and Wednesday – played by The 100‘s Ricky Whittle and Deadwood‘s Ian MacShane, respectively – hitting the road and encountering various divine beings as a winner-take-all conflict brews on the horizon. But Shadow’s wife Laura (Sucker Punch‘s Emily Browning) now plays a bigger part in the overall arc, despite the fact that she’s killed within the show’s first few minutes. (Spoiler: Just because she’s dead doesn’t mean she’s staying put.) The African folk hero Anansi is no longer an old man but a dapper Orlando Jones, initially seen inspiring a slave-ship rebellion. An original character, Vulcan, shows up halfway through the series. And the first season will only cover roughly the first third of the novel. “It’s a nice mix of fidelity …” Green says.

“But people forget that the book played fast and loose with mythology,” Green adds, “which gave us license to push things in directions that the book doesn’t necessarily go. What’s great about American Gods is the way Neil made all these aspects of mythology feel alive, current, vital. He made me fall in love with it by not being so reverent about. We meet fellow writers who say, ‘Oh, I love mythology!’ And I think, ‘You’re fucking liars, because if you read it in the original 1920s stuffy translation instead of something someone told you, you’d know those books were impenetrable!’

“What we kept saying we wanted to do,” he continues, “was to bring that spirit over. I mean, trying to explain the show in a single logline is impossible. But Bryan came up with ‘Clash of the Titans by way of The Grifters.‘ And that’s as good a way to describe it as any.”

“There was a lot of WWBD – ‘What Would Bubo Do?’ – on set,” Green confesses, referring to Clash‘s mechanical owl.

Anyone familiar with Fuller and Green’s previous work won’t be surprised by the show’s sumptuous visual sense – there will be blood, and it will be filmed spurting and cascading in slow-motion – or the occasional feeling that you may have been dosed while watching, say, literally faceless henchmen beat up our hero or Gillian Anderson appearing as David Bowie. What’s surprising is how the show seems to have taken on extraordinary (and unintentional) political resonance in regards to battles over immigration, faith and the melting-pot fabric of our nation. And while numerous recently released, long-in-production series have certainly taken on a new sense of urgency since last November, the fact that many viewers are pitching American Gods as an anti-Trump series – or threatening to “boycott” it because of a perceived partisan bias – has struck its creators as both a blessing and a curse. They did not set out to make an explicitly political show, they say. On the other hand, considering that the source material was written by an immigrant, they’re happy to see the show sparking discussion in addition to wowing fans.

“The very first stop on my book tour for American Gods, which was on June 19th, 2001, was at the Borders at the World Trade Center,” Gaiman says. “And three days after I got home from the tour, that place no longer existed. So there’s always been something political that’s attached itself to the book. What strikes me as funny, however, is when people think we put the show out right now just to piss people off. Someone told me, ‘You and The Handmaid’s Tale, your shows are the Resistance!’ Really? Ok. That becomes the filter for everything: There was an interview I did recently where someone asked me if the book meant something differently in a post-Trump world. I said it did, and that was it. Then the headline was ‘American Gods Author Slams Trump!'”

He chuckles, then stares at the recorder in front of him. “I mean, I could have. have. I think he’s an orange shit stain on the used underwear of humanity. But I didn’t say that. As for people who say they’re boycotting the show – what you’re doing is what us old-fashioned types call ‘not watching it.’ Which is fine. But I’m glad that we seem to be saying something that’s getting under certain people’s skin.”

“To be fair,” Fuller notes, “there is a religious quality to what this show is about, because all it takes is someone to believe, and you’re in the game.”