'Alias Grace': How a True-Crime Drama Became the Most Relevant Show on TV - Rolling Stone
×
×

For two decades, Sarah Polley has been desperately trying to adapt Margaret Atwood’s book about a young woman who was abused, mistreated and silenced in the mid-1800s. By the time the 38-year-old actor-turned-writer/director brought the author’s 1996 historical novel Alias Grace to the small screen – the six-hour miniseries began streaming on Netflix in early November – she had no idea she’d end up discussing the very same issues taking place in the 21st century. “I was imagining when I did press for [this], I would be introducing this as a conversation,” Polley says. “And now it’s the thing that I get asked about the most.” She’s referring to the recent Harvey Weinstein scandal and the deluge of similar accusations of sexual misconduct that have followed in its wake. “It’s an incredible shift to have witnessed. Suddenly, what happens to you, living in a society where you’re not allowed to have an authentic response to abuse, is a conversation that everybody’s willing to have.”

Alias Grace is, on the surface, a true-crime drama. Atwood based it on the real life of a poor, disenfranchised, long-suffering Irish-Canadian immigrant and maid who was found guilty of murder in 1843. No one really knows for sure whether the 17-year-old Grace Marks (Sarah Gadon) helped fellow servant James McDermott (Kerr Logan) shoot their employer, Thomas Kinnear (Paul Gross), and strangle his housekeeper/mistress, Nancy Montgomery (Anna Paquin). According to the novelist’s assiduous research, the story was basically the Making a Murderer of its day. 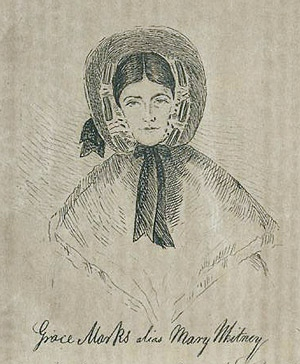 But beyond the story’s titillating mystery, Polley notes, is an ode to the power of the subjective female narrative as well as an exploration of the ripple effects of trauma. “My main objective was to track a woman’s journey through a man’s world where she’s endlessly harassed, abused – and expected to remain silent,” says Polley. Grace’s story unfolds in flashback, after 15 years in prison, during interviews with the fictional proto-psychiatrist Simon Jordan (Edward Holcroft). The series follows her treacherous sea voyage from Ireland to Canada, losing her mother along the way. [Minor spoilers ahead.] Grace soon leaves behind her younger siblings and sexually abusive father to work as a maid in a prominent household, where she develops a close bond with the charismatic, politically minded Mary Whitley (Rebecca Lilliard). Eventually, a tragedy involving an illegal abortion leaves Grace heartbroken and hardened. Every scene is somehow limned with the threat of violence, making it painfully obvious how little control girls of that era had over their fate.

Polley first approached the Canadian author for the rights to the novel when she was only 17, and best known as the star of Road to Avonlea and The Sweet Hereafter. Her compatriot turned her down. In the intervening years, the actor established herself as a deft storyteller, directing films like Take This Waltz (2011) and the autobiographical doc Stories We Tell (2012), both of which she says were heavily influenced by Grace. She continued to track the rights – and was briefly attached to another production company’s never-attempted adaptation – before finally securing them for herself.

“The truth was, I don’t think I was ready to make this before the moment I did,” says Polley, who wrote all six episodes. “As a 17-year-old girl, I would have really been writing it from a young Grace’s perspective. But I’ve had many years to obsess over it, and it oddly became a really big part of my psychoanalysis. I’ve used this book, this touchstone, to understand myself and the many people that women become when they’re forced to repress their response to horrible experiences.” (Polley recently wrote about her own appalling interaction with Weinstein for The New York Times.)

To her legions of fans, Margaret Atwood has never stopped being relevant. But the celebrated 77-year-old author has tapped into our collective psyche with uncanny precision this year: Hulu’s Emmy-winning The Handmaid’s Tale, based on her 1985 dystopian classic, premiered three months after Trump’s inauguration – at which point a story about women stripped of their rights and reproductive freedom no longer felt particularly fictional.

Knowing how much the story meant to Polley added a degree of intimidation to an already demanding role for star Sarah Gadon (Indignation). The very first shot opens with Grace looking in a mirror, her facial expression shifting ever so subtly from naïve to cunning. “The motif of a woman looking in a mirror is one that you see over and over again in film and TV, but that image is usually constructed by a male artist,” says Gadon. “Sarah said, ‘Grace is now going to sit with every claim that has ever been had over her identity, and she’s going to sit comfortably in them, which is going to deeply unsettle you.’ And that’s something that goes beyond the pages of Margaret’s book.” 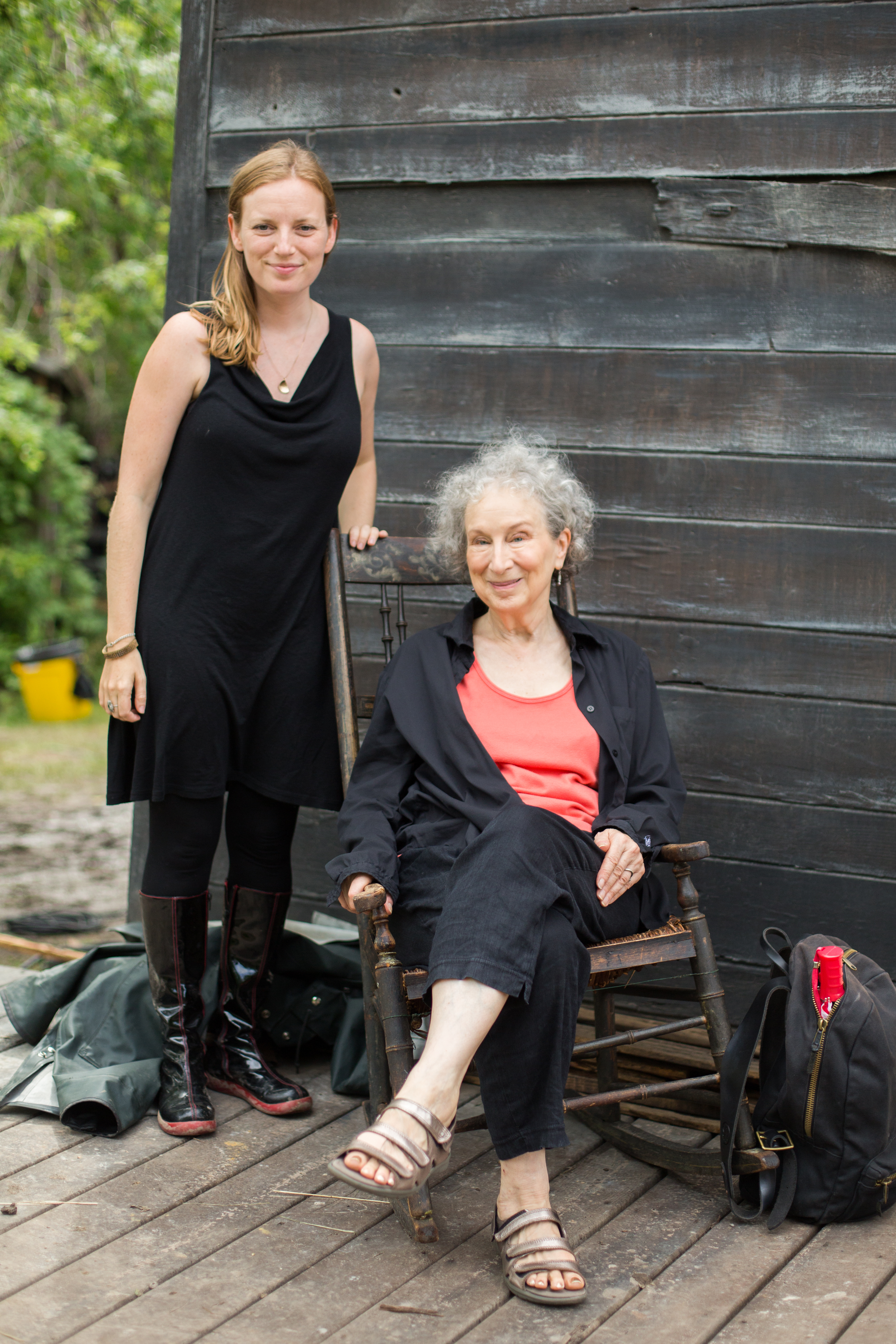 Director Mary Harron (American Psycho, I Shot Andy Warhol) was similarly daunted. “It’s like directing three movies,” she says. “I loved the material, though I was kind of scared of it. You could say it’s a feminist reworking, but it’s not at all simplistic.” Polley says she handed over the directorial reigns because “the reader in me won out over the filmmaker. I was excited to see it come to fruition through the eyes of someone that I respected.”

Harron and Gadon prepped for several months ahead of the autumn 2016 shoot; in addition to learning a Northern Irish accent, the latter spent a week in a pioneer village learning how to churn butter and scrub farmhouse floors. (“I’m freaking sewing a quilt while I’m trying to keep all this heady psychological shit straight,” she recalls, laughing.) Together, they worked to determine how best to contrast thirtysomething Grace with her younger self, and effectively communicate the various interpretations of her story. “We developed a shorthand: Innocent Grace, Bad Grace, Neutral Grace,” explains Harron. “The Grace who is telling the story has this serene detachment, which comes from suffering. It’s almost as if she’s in the afterlife and she’s looking at the world and the things that have happened at some remove.”

“My main objective was to track a woman’s journey through a man’s world where she’s endlessly harassed, abused –  and expected to remain silent.”-Alias Grace producer/writer Sarah Polley

(Gadon, on the advice of Atwood, won’t say whether she believes Grace is guilty or not. But she admits, “When women are oppressed, you want them to have agency … so as morbid as it might sound, I think there were more times when I wanted her to have done it.”)

Each take contained a slightly different character shading so that Harron could assemble a nuanced version in the editing bay: One minute the piety of Grace’s words are as calming as a lullaby; the next she utters an opinion with enough sharpness to cause whiplash. “I wonder how much sublimated rage she must have carried with her, this child harassed on every corner,” wonders Dr. Jordan, speaking to the kindly reverend (director David Cronenberg) who wants him to exonerate Grace. That question is one viewers are intended to ask as well. “Obviously there’s a lot more of Innocent Grace than Bad Grace,” says Harron. “But if you come to the conclusion that she’s guilty you would at least understand why she would have done it.”

This remarkable (and very Canadian) combination of talent resulted in a miniseries that not only demands to be quickly devoured, like so many successful true-crime offerings (“I consumed all of those series like a junkie,” admits Polley. “There’s all kinds of ethical implications that I’m not 100 percent comfortable with, but I have basically an endless appetite for these things.”), but also turns the act of simply listening to a woman tell her story into something far more meaningful. “Often, women’s voices are left out of their own stories,” says Polley. “I was more interested in the psychology of Grace than in the factual answer of what she did and how. All we have are theories, mostly from men, who had various agendas. What we don’t have is her voice.”

That a centuries-old murder could raise issues of class, gender and power that still resonate today is a testament to Atwood’s writing. But its resonance has become so much more acute recently in the midst of a watershed moment wherein hundreds of women (and men) are coming forward daily to share stories of sexual harassment and assault. Suffice to say, the outpouring that’s followed those initial Weinstein allegations took everyone involved with Alias Grace by surprise. “You work on things for years and years, and sometimes you hit the zeitgeist and sometimes you don’t,” says Harron. “This happened with American Psycho. I made it, and then people felt it was relevant five or 10 years after it came out.” (The 2000 film was originally criticized for its prurient violence; it has since been touted as a scathing capitalist satire.) She adds: “I usually expect that to happen.”

And Gadon is relieved that the miniseries can in some ways provide a counter-narrative to these upsetting revelations. “When women are in positions of power and authority, what is possible onscreen becomes so much more intimate,” she says. “In light of the current news cycle, which is so disturbing and disheartening, and has sometimes left me feeling hopeless, I think about what Mary and Sarah and Margaret have done, and I’m so proud of the show.”

For Polley, of course, the enduring appeal of Margaret Atwood makes perfect sense, especially right now. “This is the moment where we have the appetite for someone as clear-seeing and ruthless as Margaret, because we’re scared,” she says. “People know they need to look brutally and honestly at the world.”