It all started with a podcast. For both Phoebe Robinson and Jessica Williams, a chance work meeting led to the latter appearing on the former’s Web-chat extension of her blog Blaria (“black Daria“). Cut to three years later: The duo have their own hit podcast 2 Dope Queens, appear in sold out theaters around the country and have managed to finagle one of stand-up comedy’s holy grails – a four-special deal with HBO – that launches February 2nd.

“It was kind of like fate,” Robinson says over the phone. In July 2014, she was a background actor on a Daily Show shoot about black hair in the military; Williams was the cast member doing the field piece. They hit it off during downtime on set, which led Robinson to ask if the correspondent would mind recording a Blaria appearance. “I [recorded the podcast] out of my crummy one-bedroom apartment that had a mold issue in my bathroom ceiling,” she recalls. “I said [to Jessica,] ‘You should come over and do an episode.”

The pair bonded almost immediately. At one point, Williams mentioned that, while she had an improv background, she had never done stand-up; Robinson suggested that she make her stand-up debut at UCB East’s Blaria Live show. The crowd ate it up. “It’s like when you have a bite of food that’s really good or when you kiss someone and you’re like ‘Oh that kiss had a little extra oomph than what’s normally in a kiss,” Robinson adds. “We hit it off and were like, ‘Let’s do it again.’ Each show was like a date, and then it just ended up working out.”

The gradual build-up to launching 2 Dope Queens is reminiscent of the way both of them ended up in the comedy world. Los Angeles-native Williams found herself acting as a kid but realized her natural wittiness might be better suited for Second City-style improvisation. “When I auditioned for my high school improv team when I was a freshman, I remember getting my first laugh and being like ‘Whoa, this is great,'” she says.

In college, Williams began auditioning for movies when a casting director told her to submit a tape to The Daily Show. She flew to meet with Jon Stewart (appropriately enough, he’s the first of four interview guests on HBO’s 2 Dope Queens show) and, a few days later, was offered a full-time correspondent job for that 2012 election year. “It was funny because I was like ‘Thank you so much for the job. Can I finish my exams first?'”

As for Robinson, she had relocated from Bedford Heights, Ohio, to Brooklyn, attending Pratt and participating in the college’s improv team. “Growing up, I was a huge film and TV buff,” she explains. “I was like ‘I’m gonna move to New York, work in film as a writer or producer and marry Robert De Niro.’ That was the plan.” Instead, she found herself working in offices for production companies, first as a receptionist at New Line Cinema and later as an executive assistant to the president of Picturehouse.

Robinson took classes at UCB but found them to be too expensive to continue. A friend ended up suggesting stand-up – an idea she immediately rebuffed. “She was just like ‘You don’t like your job, so this could be the brightest part of your day,'” Robinson says of the tough love. “And I was like ‘Ooh, ouch.’ But also, like, accurate, you know?” 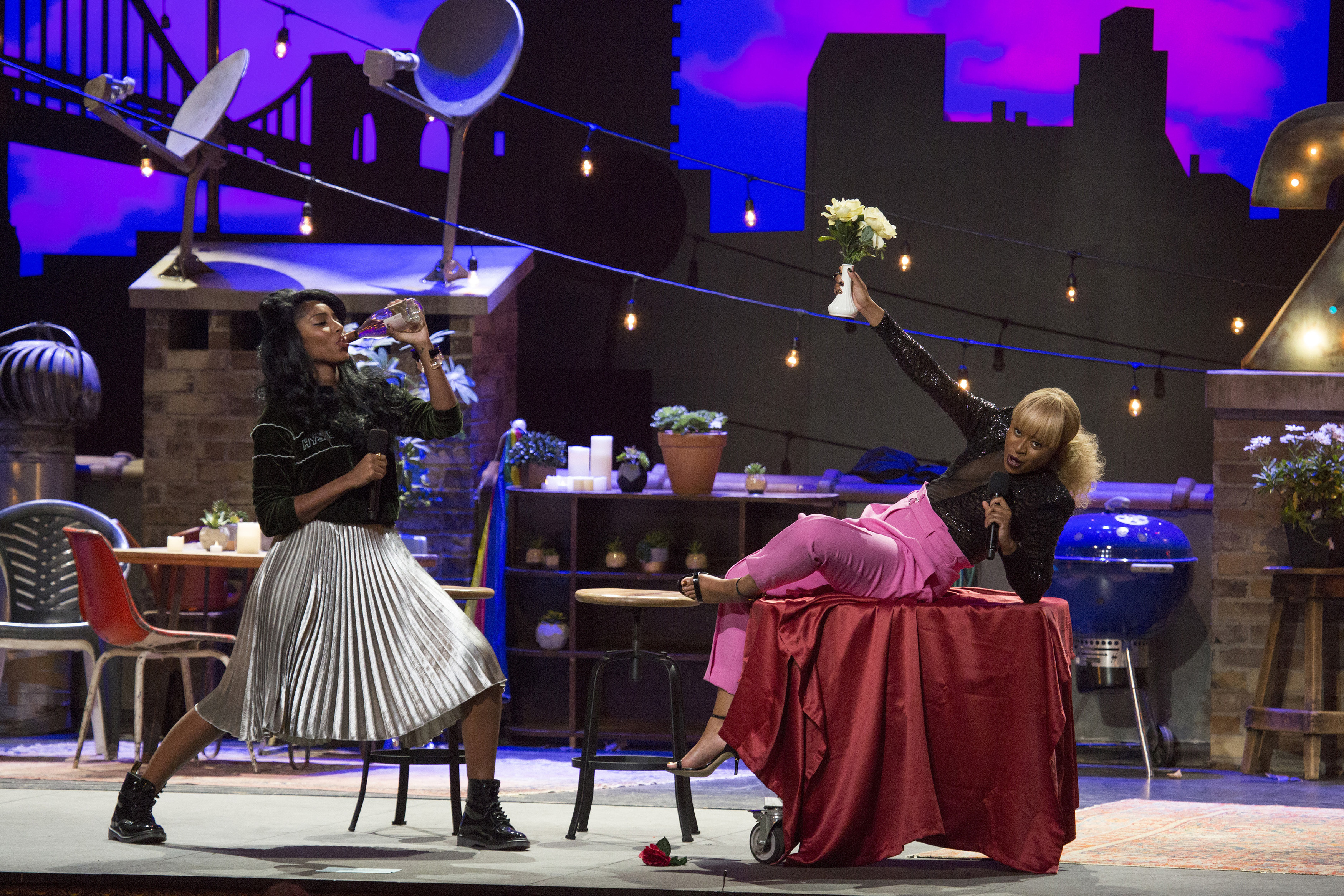 So after Robinson found herself out of a job when Picturehouse closed down in 2008, she took a stand-up course at Caroline’s Comedy Club, which turned out to be the push she needed to pursue comedy full-time. “It took a little bit of time but I’m happy,” she concludes.

2 Dope Queens officially launched in March 2016. It was WNYC’s first show under their freshly launched WNYC Studios podcast division, which now boasts a second Robinson show, Sooo Many White Guys, produced by Ilana Glazer of Broad City. And while podcasts have become a popular D.I.Y. forum for a deluge of mostly white men from the improv and stand-up scenes, this pair of smart and hilarious black women quickly found a road-less-traveled route by simply being the goofiest versions of themselves and uplifting non-straight-white-male comics who often don’t get as much screen (or audio) time. They talk about everything from Tinder to Bono, and their frank but frequently silly interviews are usually motivated by the incredible way their charisma bounces off one another.

“We were having a really great run of podcast episodes,” Robinson recalls, “and I said to Jess, ‘This is a TV show. I think this is a variety TV show.'” The pair had also done an increasing number of live gigs for their fervent fanbase, so pitching the idea of a televised version of their podcast/stage act to HBO was a no-brainer; it was Robinson’s manager – “a crafty bitch,” as Robinson describes – who told them to ask for more than just a one-off. “I think we walked into our first meeting with HBO and were like ‘What do you guys want us to do? How can we sexify this podcast?'” Williams says. “HBO was like, ‘No, we just want you guys to do the podcast.” They left the meeting with a commitment for four specials.

With that in mind, Williams and Robinson were careful to not break a formula they’d perfected: They open each show with their friendly, funny, over-sharing banter about their lives, culture and anything else that comes to mind, turning Brooklyn’s recently renovated Kings Theater into something that resembles a late-summer rooftop party. Over the course of the next hour, a few comics (mostly friends from the podcast like Aparna Nanceherla, John Early and Michelle Buteau) do stand-up sets. Then the hosts return to interview each nights’ guest of honor: In addition to Williams’ old Daily Show boss, Sarah Jessica Parker shows up to discuss hair, while Tituss Burgess and Uzo Aduba show up for episodes titled “Hot Peen” and “Black Nerds,” respectively.

It’s just familiar enough that longtime Dope listeners will recognize all of the elements of the podcast that make you feel like you’re eavesdropping on some old friends’ coffee-klatch conversation – and just different enough to make the specials feel like the next step for their bantering double act. “Aside from hair and make-up and wardrobe and being at the beautiful Kings Theater in Brooklyn, it really just felt like we were doing what we normally do,” Williams says. “Which is the beauty of these specials if you’re a longtime 2 Dope Queens fan. If you’re not and this is your first time watching, you’ll be able to jump right into it.”

As for what happens after these specials air, Robinson is set to make her feature-length film debut in Ibiza alongside Vanessa Bayer and Gillian Jacobs later this year, and her book You Can’t Touch My Hair is being re-printed. Meanwhile, Williams is gearing up for an undisclosed role in this fall’s big Harry Potter franchise blockbuster Fantastic Beasts: The Crimes of Grindelwald.

“I think hunkering down and really focusing on that will be really good for us,” Williams says of their solo projects. But she recognizes the way doing 2 Dope Queens with Robinson makes her feel. “Just knowing that people have responded so much to just us being ourselves,” she says, “is a really great feeling.”