The satiric sci-fi author Douglas Adams once wrote, “Space is big. You just won’t believe how vastly, hugely, mind-bogglingly big it is. I mean, you may think it’s a long way down the road to the chemist’s, but that’s just peanuts to space.” Now, substitute the name Jack Reacher for “space,” and you essentially have the core conceit of the two dozen or so Reacher thrillers written by Lee Child over the last 25 years.

Jack Reacher has many other notable traits besides being huge: He was a veteran Army investigator! He now lives as a hobo, wandering from town to town with little but the clothes on his back and a folding travel toothbrush! He’s a brilliant detective with almost superhuman powers of perception and time-keeping! Mostly, though, Reacher is big: a six-foot-five wall of muscle — with hands Child has at various points compared to the size of both dinner plates and supermarket chickens — who draws attention in every room he enters, and is the favorite in the many, many, extremely many fights he gets into.

Hilariously, pocket-sized movie star Tom Cruise insisted on playing Reacher in a pair of movies. The films more or less captured the character’s intensity and self-sufficiency. But Cruise lacked the mythical stature that’s long distinguished Reacher most clearly from his action-movie peers, and especially from his sleuthing counterparts. Those Cruise movies are good thrillers (the first especially), but they’re not really Jack Reacher movies.

Even more hilariously, Amazon has built the entire marketing campaign for its new Reacher series around star Alan Ritchson’s build, stopping just shy of using the tagline: “Reacher’s tall again!” But this turns out to be a case where size doesn’t matter matter as much as you might hope.

Ritchson has played superheroes in shows like Smallville and Titans, and he’s statuesque enough to look plausible casually bursting out of a pair of flex cuffs. But whenever his shirt comes off (which is often), he has the smooth muscle definition of a man who spends four hours a day in a gym with a personal trainer, followed by another two getting touch-ups at the salon, rather than a slightly evolved caveman who came by his strength through scraps and brawls. Ritchson’s 12-pack is a physical manifestation of a tonal problem: His Reacher is smarmy and pleased with himself, rather than casually secure in his own vast abilities. He’s a generic vigilante who just happens to look like a mountain next to the small-town Georgia cops (played by Malcolm Goodwin and Willa Fitzgerald) who assist him in this maiden adventure(*).

(*) Ritchson is listed at six foot two, which still isn’t quite Reacher-sized. But since most actors — including many of his co-stars here — are on the shorter end of the spectrum, he can pass.

The show also lacks the internal monologue in which Reacher is constantly doing the math to figure out where suspects may have gone and how best to injure the five men attacking him at the moment. Amazon’s Reacher occasionally explains himself to others, but never in a way that makes him live up to the “Sherlock Homeless” nickname he has in the novels. And anytime Ritchson tries to show Reacher acting cold and stoic, he instead comes off as stiff and robotic. When a new friend asks Reacher if he’s looking for payback against someone, he says, “Payback, justice, vengeance — looking for the whole gang” in the same laid-back, cocky tone he might use to hit on a woman at a bar. 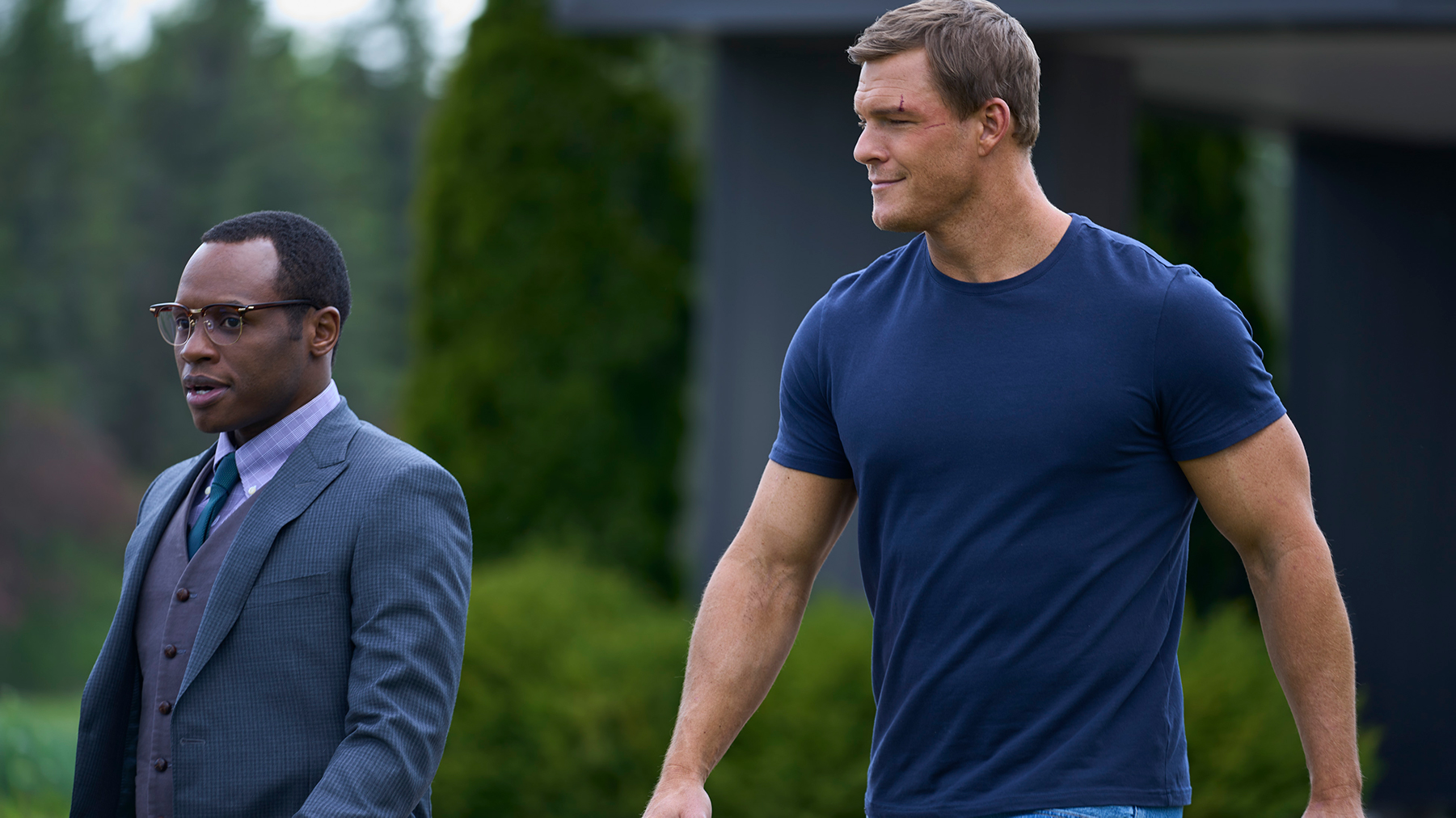 The show is adapted by Nick Santora (creator of CBS’ Scorpion) and the premiere is directed by Thomas Vincent (who helmed the 2018 UK hit The Bodyguard). The series best makes use of Ritchson’s size in the brutal fight scenes, which often take place in close quarters and demonstrate why it’s stupid to ever attack this guy. (Though crowbars oddly prove to be Reacher’s Kryptonite throughout the season.) There’s one bout at the end of the sixth episode that makes such specific use of Ritchson’s sheer mass, even the Reacher of the books would likely approve.

Santora has clear affection and respect for those books, and the season is a fairly faithful adaptation of the first Reacher novel, The Killing Floor, where Reacher is first a suspect, and then an unofficial investigator, regarding a series of nasty murders in a previously quiet rural community. (The show’s biggest change is to bring in Maria Sten as Frances Neagley, who served in the Army with Reacher and appears in several other stories, but not this one.) I’ve happily devoured all of these books, though not for the sometimes gimmicky plotting, nor Child’s fascination with torture and gore. (“Pardon my French,” a cop asks at a murder scene here, “but where the heck are his testicles?” The reply: “In his stomach.”) The books live and die by Reacher himself as this dirty, ass-kicking genius. If he’s not interesting, none of it is.

So far, we’ve gotten one onscreen Jack Reacher who had the charisma but not the size, and another where the reverse is true. Actors do exist that have both — most of them tend to be ex-wrestlers — though I fear that two attempts may be as many as we get for a book series that’s turned out to be a very big challenge to adapt.

All eight episodes of Reacher Season One begin streaming on Amazon Prime Video on Feb. 4. I’ve seen them all.