Midway through the second episode of Disney+’s new Marvel series Moon Knight, mercenary Marc Spector has a heart-to-heart conversation with museum gift shop clerk Steven Grant. This is complicated by the fact that Marc and Steven are two different personalities — both played by Oscar Isaac — of the same man, created by the mental illness known as disassociative identity disorder. Marc lays out the whole Moon Knight premise to Steven, explaining that he serves as the avatar of the Egyptian moon god Khonshu, protecting the vulnerable and delivering justice on Khonshu’s behalf. Steven considers this for a moment, then replies, “Ohmigod, that’s the stupidest thing I’ve ever heard!”

This is a typical example of the brand of cliche-puncturing, self-deprecating humor that has become a key part of the formula to every MCU movie and TV show. It feels a bit more pointed here, though, because Moon Knight has long been a mess of a character, and one whom Moon Knight the show doesn’t quite manage to straighten out, despite a fun and energetic lead performance — or performances — from Isaac.

There’s a comedy expression called “putting a hat on a hat,” where two unrelated jokes are combined in ways that end up hurting one another. Moon Knight, created in the mid-Seventies by Doug Moench and Don Perlin, is a cowl on a cowl on top of three more cowls. He is a mercenary-turned-super-hero! He has multiple personalities! He serves as the fist of an Egyptian god, but also kind of functions — and at times looks — like Marvel’s answer to Batman! Taken separately, many of these individual components could be the basis of a fascinating character, but they almost never quite fit together(*). But the various ideas — the costume and/or the mental illness in particular — have proven intriguing enough that both fans and some of the top writers in comics have spent decades trying to make Moon Knight, like fetch, happen. Occasionally, it works; usually, it doesn’t.

(*) Part of the problem is that he was just meant to be a one-off antagonist for the titular hero of the comic Werewolf by Night, and Moench and Perlin thought a lunar-themed opponent made sense under the circumstance. All the other increasingly complicated character traits came later, a bit at a time — at first, the other identities were just disguises Marc used to aid his mission, and the mental illness concept was added after that — until it all became too unwieldy.

Now it’s Kevin Feige and the rest of the Marvel team — with the series created by Jeremy Slater (The Umbrella Academy) and the first episodes directed by Mohamed Diab — taking their turn at trying to to turn the character’s many mismatched pieces into a cohesive picture. And at the same time, they are also attempting to integrate the darker aspects of the character — who racks up a much higher body count than your average costumed hero and, again, suffers from a debilitating mental illness — into the welcoming, semi-jokey tone of the MCU. As with most things Moon Knight-related, the results are mixed. 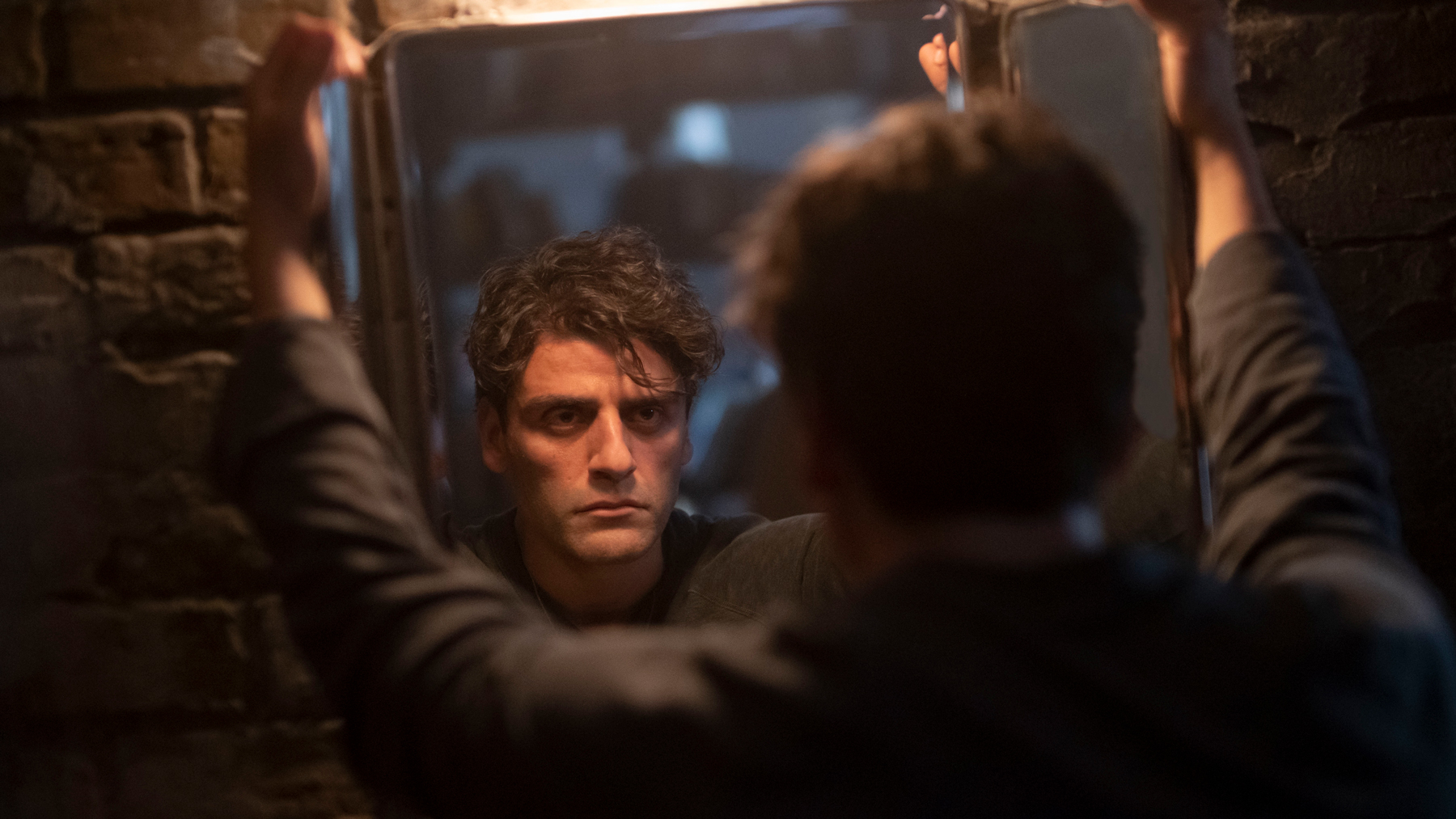 Slater opts to begin the show entirely through the eyes of Steven Grant, who has no idea any other personalities exist, much less that his alter ego is a globe-trotting masked hero who’s tight with a Middle Eastern deity. He’s just living his lonely existence in London, working at the museum and struggling to make friends. He believes he suffers from severe sleepwalking, and occasionally seems to lose time altogether. But it’s not until he wakes up one morning in the Swiss Alps with gunmen chasing him — then blacks out multiple times, repeatedly waking to find himself surrounded by men he somehow just beat up or killed — that he comes to realize his problems run much deeper. It’s a clever way into this complicated premise, in that it requires Steven to learn about it along with us, even as we get to skip past a boring origin story plot. (Marc has been operating as Moon Knight for quite a while by the time Steven becomes aware that any of this is happening.)

And making Steven into a sweet but clumsy dweeb, rather than the Bruce Wayne-esque playboy he is in the comics, plays well into both Oscar Isaac’s light comic gifts and the overall leanings of the MCU. Despite being one of the most dashing leading men alive, Isaac makes for a surprisingly convincing nerd — when Steven refers to Marc (whom he can see in mirror reflections) as “bloody handsome,” you can appreciate the physical difference. Plus we already know from his work in the Star Wars sequels that Isaac is good with the banter; Poe Dameron’s constant trolling of Kylo Ren and General Hux already felt more Tony Stark than Han Solo. (Also, the multiple personality issue helps justify Isaac’s extremely fake-sounding English accent as Steven, as it’s just an affectation created by Marc’s fractured psyche.)

So when Moon Knight is leaning into the odd couple dynamic between these two aspects of the same man — and, to an extent, when it’s incorporating the great F. Murray Abraham as the voice of Khonshu, who somehow manages to sound ponderous and bitchy at the same time (Khonshu does not like Steven) — it’s fun in the pleasing, if formulaic, fashion of much of the MCU. But once you push past Isaac pulling double duty, there’s precious little to feel excited about.

Ethan Hawke joins a long list of overqualified actors taking supporting roles in MCU projects. Unlike, say, Vera Farmiga in Hawkeye, he’s at least playing the chief villain here: Arthur Harrow, the avatar for Ammit, one of Khonshu’s rival gods in the Egyptian pantheon. But the character’s a snooze, and even Hawke doesn’t seem particularly enthusiastic about Harrow’s Kilmonger-esque claims that he’s really the good guy here. Despite a potential apocalypse being in the works, there’s surprisingly little tension to any of Marc and Steven’s globe-trotting race to stop Harrow. There’s a stultifying sequence in the third episode where Khonshu forces the rest of the pantheon to gather in hopes they will help him prevent Harrow from releasing Ammit from centuries-long imprisonment. This should be the core of the whole premise and plot, and instead it’s shockingly low in energy and inspiration. That scene, and many others like it, make it hard to invest in the plot, the larger talk of gods and fate and free will, or even on Marc’s attempted reconciliation with his estranged wife Layla (May Calamawy from Ramy). 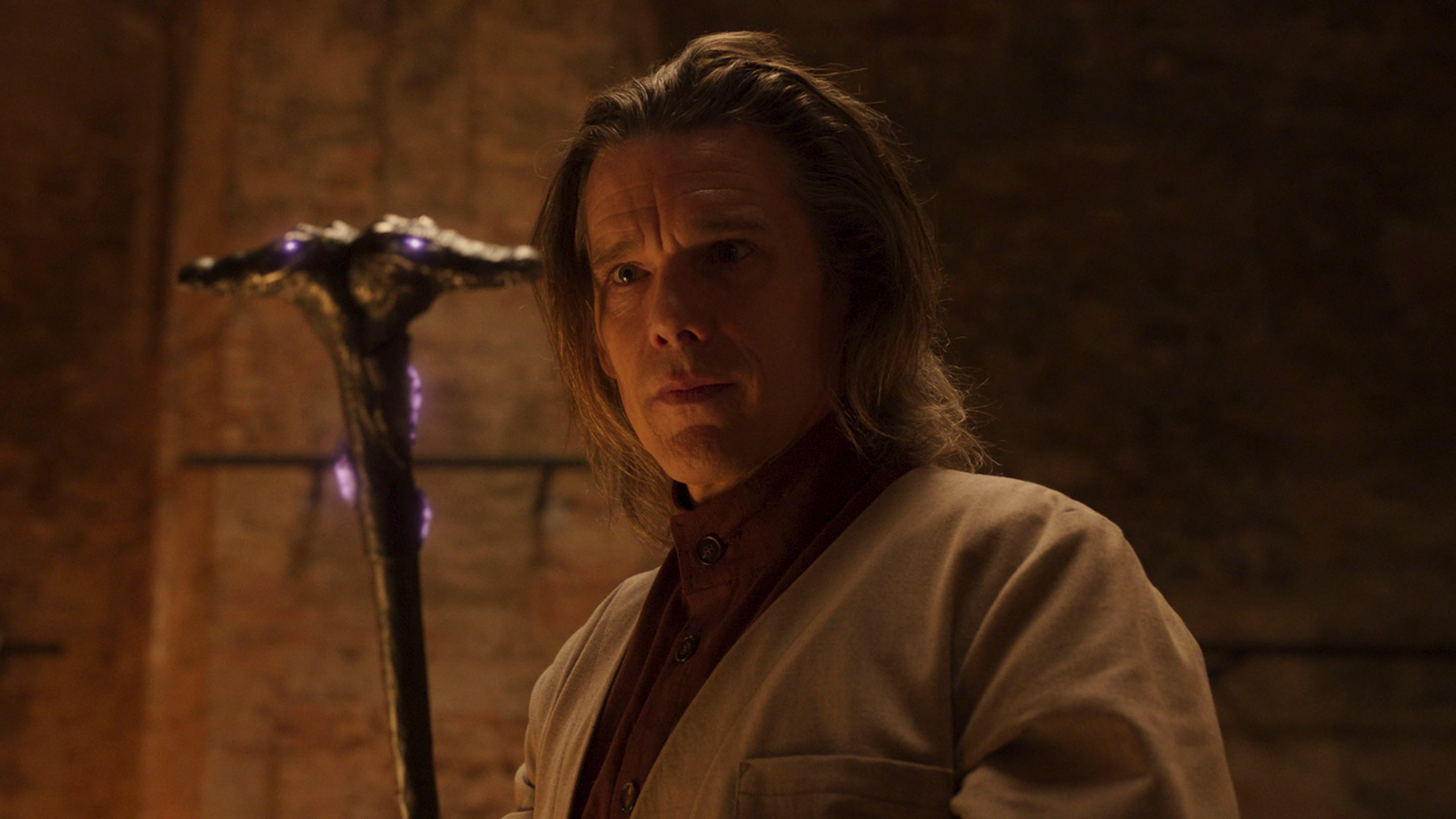 True to form for Marvel Studios, the superhero action is uneven in quality. The most memorable fight scenes here are the ones laced with a lot of Jackie Chan-style slapstick, like Marc’s influence preventing Steven from handing a crucial treasure over to Arthur, or Steven driving a cupcake truck through the Alps(*) while “Wake Me Up Before You Go-Go” plays on the radio. When things are played straight, they tend to feel more like fifth-rate knockoffs of Indiana Jones, Lara Croft, and/or the National Treasure films.

(*) One amusing detail for eagle-eyed TV viewers in the Alps sequence: Harrow is introduced telling his followers that their peaceful village may feel like heaven, but it’s really a place filled with darkness. The studio backlot used for this scene is the same one from The Good Place, which also involved a fractured version of heaven.

That said, Marvel gave critics four of the six episodes (substantially more than usual for these shows, but still not the full season), and the fourth one begins to pivot a bit more into the darkness inherent in the character. There’s a creepy — and, at times, fairly graphic and disgusting — chase sequence in a pyramid involving mummies, and then a twist leaning even harder into the complications raised by linking a mentally ill man to the world beyond this one.

The conclusion to that fourth episode left me more engaged in the plot of Moon Knight than anything had in the preceding hours. But given the character’s long history of being more exciting in theory than reality — and given that none of the previous MCU shows have been at their best in their finales — my hopes aren’t too high for the concluding chapters. There are many interesting aspects to Moon Knight, but neither the comic books nor this TV show named for him quite know what to do with them all.