Atticus “Tic” Freeman, the young Korean War veteran hero of HBO’s fantastic — in every sense of the word — new drama Lovecraft Country, has a weakness for pulp stories. As he puts it, “I love that the heroes get to go on adventures in other worlds, defy insurmountable odds, defeat the monster, save the day.” But he’s also painfully aware that these tales rarely have room for someone who looks like him. His favorite author, the 1920s horror stylist H.P. Lovecraft, was also a vile bigot who once wrote a poem comparing black men to “beasts” filled with vice. (Lovecraft also used a far less gentle term than “black men,” as Tic’s pulp-hating father Montrose, played by Michael Kenneth Williams, once pointed out to him.)

In this adaptation of Matt Ruff’s novel, written primarily by Misha Green, who also produced with Jordan Peele and J.J. Abrams, Tic gets a chance to live out a plot just like the ones in his beloved sci-fi and fantasy novels. In the process, he battles both monsters from myth and flesh-and-blood ones straight out of Jim Crow’s America — and, on more than one terrifying occasion, members of the second group who have transformed into the first.

It’s 1954, which means Tic has to ride in the back of the bus on a return trip to his native Chicago, where his Uncle George (Courtney B. Vance) produces a Green Book-like guide that lists safe places for African American travelers to visit across the country. Montrose has gone missing, so Tic, George, and Tic’s old friend Leti (Jurnee Smollett) pile into George’s woody wagon to rescue him — little realizing that his predicament will involve demons, shape-shifters, and, oh, yeah, white supremacists who can cast magic spells.

Using supernatural terrors as metaphors for the more down-to-earth kind is a reliable staple of the genre, from Buffy the Vampire Slayer to Peele’s own Get Out. But Green and her collaborators employ the device with particular deftness, toggling back and forth between racist cops and shoggoths, or burning crosses on lawns and ghosts lurking in sub-basements. The Freemans and Leti are alternately threatened and aided by Christina (Abbey Lee, below) and William (Jordan Patrick Smith), a mysterious duo who look like the whitest, blondest people ever put into existence, much less on television, and the series soon begins to argue that whiteness itself can seem like a superpower when you’re black in a country with so much racism coursing through its veins. In any era, this material would be potent; in the post-George Floyd reckoning, it couldn’t possibly feel timelier, even if the story takes place in the Fifties. 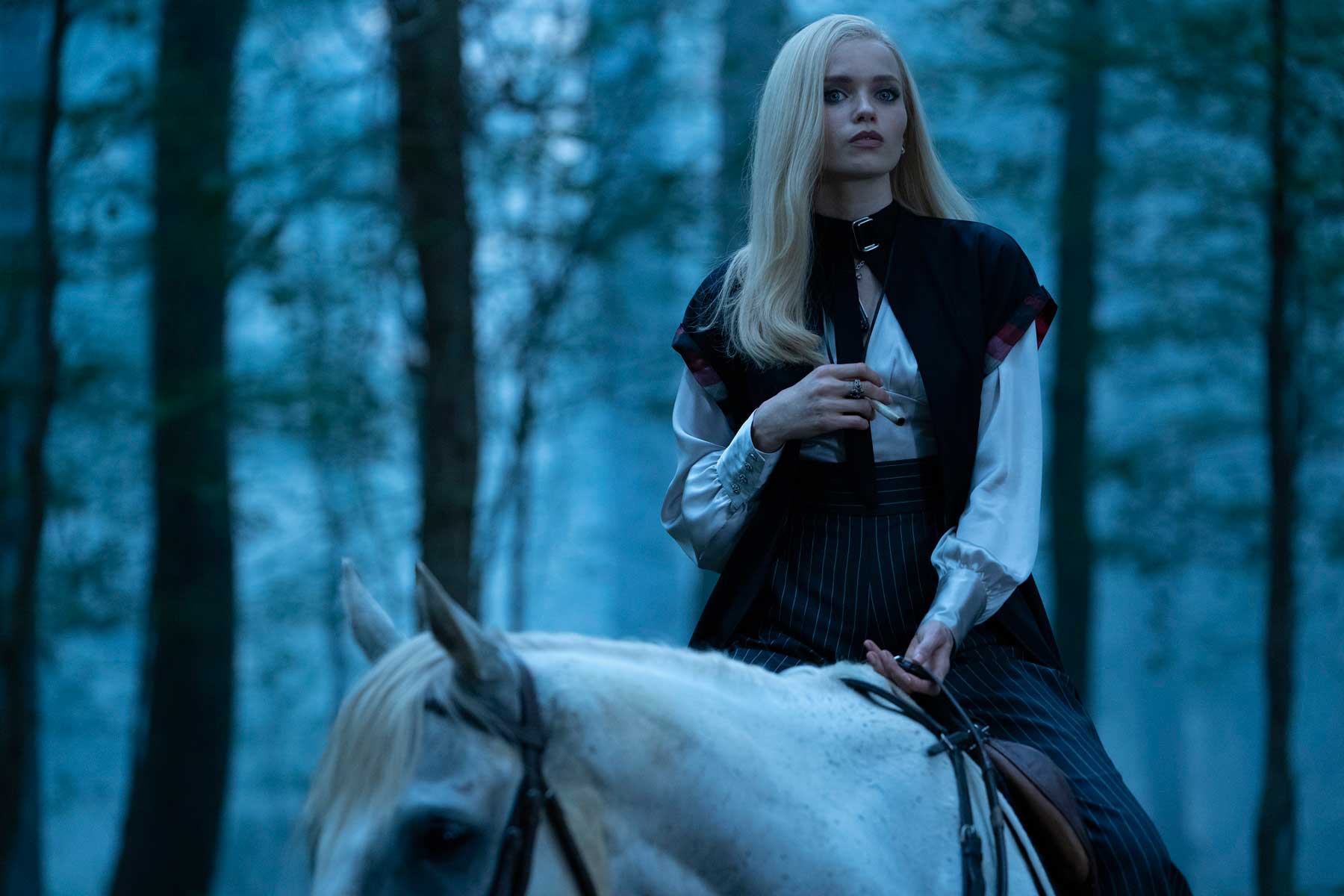 But then, Green has far more on her mind than any one decade, or even genre. It’s not just that the Freemans love pulp and related entertainment (George’s daughter Diana, played by Jada Harris, makes her own comic books, featuring black heroes with names like Panther Man), while Leti and her sister Ruby (Wunmi Mosaku) are passionate about the blues. Lovecraft Country itself is a collage of influences and time periods, traveling backward through America’s history of racial atrocities (Montrose looks at a fire and mutters, “Smells like Tulsa”), then forward to consider the many hopeful moments and disappointments from the decades that follow Tic and Leti’s journey. Sometimes, the soundtrack is era-specific, but get used to the likes of Cardi B or Frank Ocean or The Jeffersons theme accompanying the action — or, in a bold break from cinematic tradition, for some montages to be accompanied not by songs, but by monologues, such as an excerpt from James Baldwin’s famous 1965 debate about racism with conservative pundit William F. Buckley.

More importantly, get used to this high-speed blender working spectacularly well. Each hour seems full to bursting with ideas and incident, as if Green wants to squeeze in as much as she can while she has the chance. (Can you blame her? She’s one of only a handful of black series creators in HBO’s long and otherwise progressive history.) After the road trip in search of Montrose, there’s a crackerjack haunted-house story, and an Indiana Jones-esque hunt for treasure buried underneath a museum. So much is happening, all so stylishly presented, that each episode feels like it could last twice as long and not get dull(*).

(*) It helps that, after the road-trip two-parter that begins the series, the stories are more standalone than is normal for a complicated Peak TV drama like this. There’s a larger threat Tic and Leti are battling, but there are also some menaces introduced and resolved over the course of a single hour. Remember, kids: Episodic storytelling can be your friend!

Jonathan Majors will be the show’s big discovery (that is, if you haven’t seen Da 5 Bloods or The Last Black Man in San Francisco), and he has screen presence to spare in a role that’s at least as much about Tic’s quick and reactive mind as it is about his abundant muscles. Smollett, who worked with Green on the brilliant-but-canceled slavery drama Underground, is pure dynamite as the story’s wild card. There’s a sequence in the third episode where Leti uses a baseball bat to attack a group of cars parked around her home by racists bullies; she plays it equally as a dance number and an action sequence, and it’s as riveting as it is cathartic.

As long as there have been men, there have been monsters. Lovecraft Country lands in a specific time and place for both, but in a way that feels universal as much as it feels scary. It’s one of the best shows HBO has made in a long, long time.