A League of Their Own is a pretty darn perfect movie. The Penny Marshall-directed film from 1992, about the women recruited to play professional baseball while so many men were off fighting World War II, is a crackerjack sports movie, a winning ensemble comedy, and a well-hit drama about female empowerment in an era when the concept seemed utterly foreign. It’s got all-star performances by Geena Davis, Tom Hanks (it’s the role that kicked off his Hall of Fame run in the Nineties), Madonna (never better as an actor), and more. 10 out of 10. No notes.

Amazon’s new A League of Their Own TV series has many notes. It is, on the one hand, clearly adoring of the movie, frequently quoting various lines, images, and scenes from it 30 years later. And on the other hand, it is an attempt to cover many subjects — particularly regarding race and sexuality — that the movie didn’t, or in some cases couldn’t.

This new League(*) is interesting and fun in many ways, with a strong cast highlighted by D’Arcy Carden from The Good Place. But in attempting to improve on perfection — or, at least, to point out the imperfections of the mainstream movie studio comedy system of the early Nineties — the show reveals some large flaws of its own.

(*) This is actually the second TV version. In 1993, CBS briefly aired a sitcom (full episodes are on YouTube) that was a more straightforward adaptation, with Carey Lowell in the Geena Davis role, Sam McMurray replacing Hanks, and a few holdovers from the movie’s cast.

'A League of Their Own' Returns As a TV Series: How's How to Watch the New Show Online

Created by Broad City star Abbi Jacobson and Mozart in the Jungle writer Will Graham, the series opens in 1943. The men have been off to war for more than a year, and Carson (Jacobson) is leaving small-town Idaho to try out for a new women’s baseball league. Like Davis’ Dottie Hinson, Carson is a power-hitting catcher with a husband serving in the military overseas, and even runs to catch a train in the opening minutes like Dottie and her sister Kit do in the movie. The similarities end there, though. Dottie loved to play but ultimately viewed baseball as an adventure to enjoy until her husband could return to resume their real life together. Carson sees it as a means of escape from a life that increasingly feels wrong to her as she realizes that she’s queer.

At tryouts, she befriends the glamorous and magnetic Greta (Carden) and her rough-and-tumble pal Jo (Melanie Field), and is impressed by the rifle arm of Max (Chanté Adams), who is barred from the league because she’s Black and baseball won’t be integrated for another four years. The movie features a memorable but brief scene where a Black woman watching a Rockford Peaches game demonstrates similar talent — Marshall and company’s way of acknowledging that Black players were unfairly left out of this, but not considering the injustice any more deeply than that. The show, on the other hand, splits itself into parallel narratives: Carson and other Peaches going through various personal struggles over the course of their rookie season, and Max trying to find a place for herself in a world that’s prejudiced against several fundamental aspects of her existence. 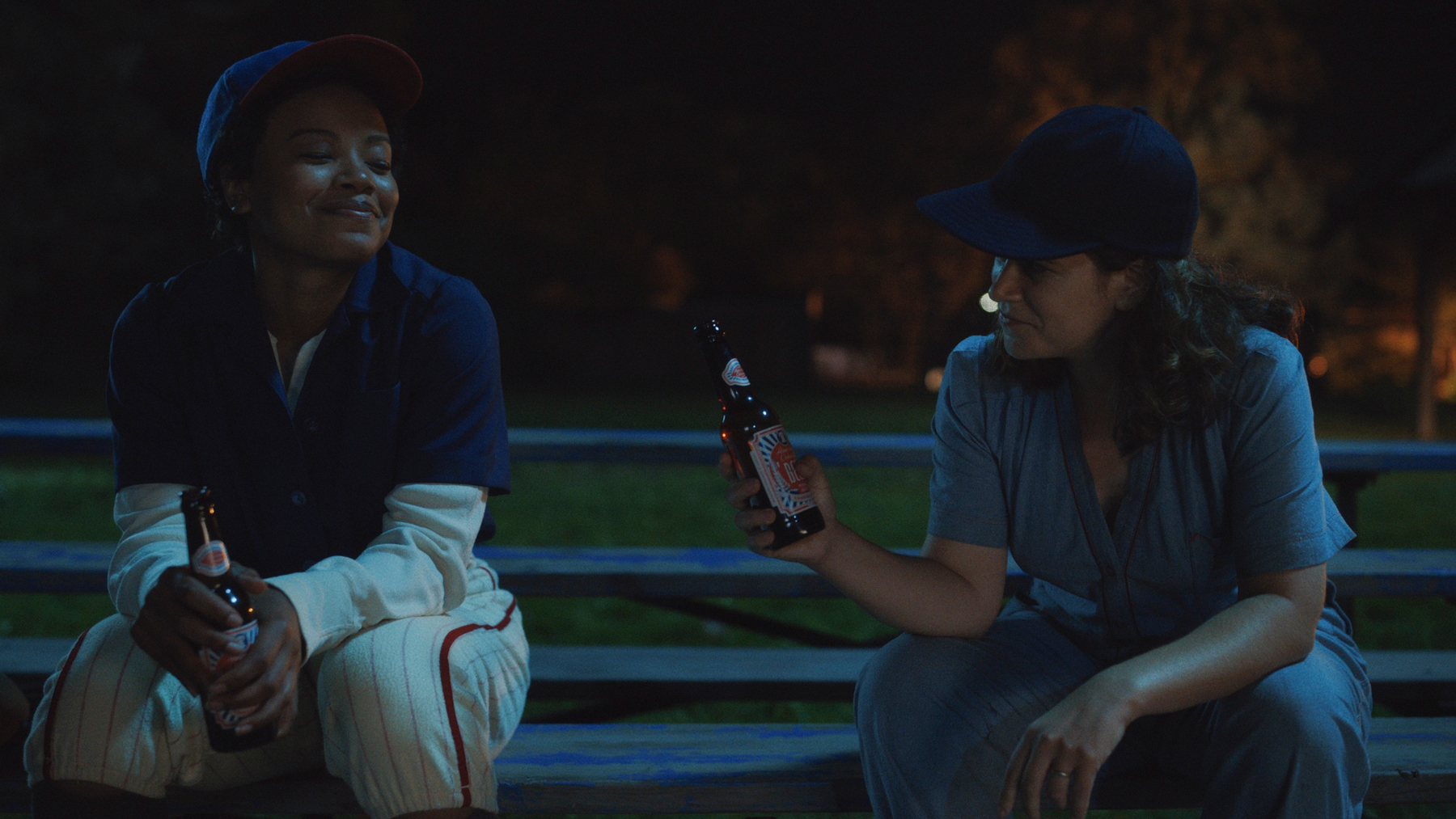 The two stories periodically intersect as Carson and Max become friends and meet late at night to play catch(*) and offer each other advice. Thematically, the split structure makes sense, as both narrative strands feature characters  — many of them LGBTQ+ — butting up against the restrictions of a white, heteronormative patriarchy.

(*) This sets up an odd running gag about another classic baseball movie, regarding the phrase “have a catch” from Field of Dreams.

In practical terms, though, Jacobson and Graham struggle to balance the needs of each half. In one-fourth of the time that the show’s first season uses, the movie gives a much stronger sense of the ebbs and flows of the Peaches’ season, even as it gave many of the characters some interesting arcs. Here, the baseball can at times feel like an afterthought, or at least rushed. Nick Offerman turns up for a few episodes as the team manager Dove, a very different sort from Hanks’ Jimmy Dugan, and just as the show is figuring out Dove’s relationship to his players, he vanishes for a long stretch, leaving the women to coach themselves.

That the team is allowed to continue their season for a while without any male authority figure is one of several examples of this League trying to have things both ways, and only sometimes succeeding. At times, it very bluntly illustrates the many ways this time period could be oppressive to women like Carson and Max. At others, it has an air of wish fulfillment, where characters get away with behavior considered deviant at the time because the show wants them to, whether because it feels less bleak or because the anachronistic power dynamic is needed to keep certain subplots moving. 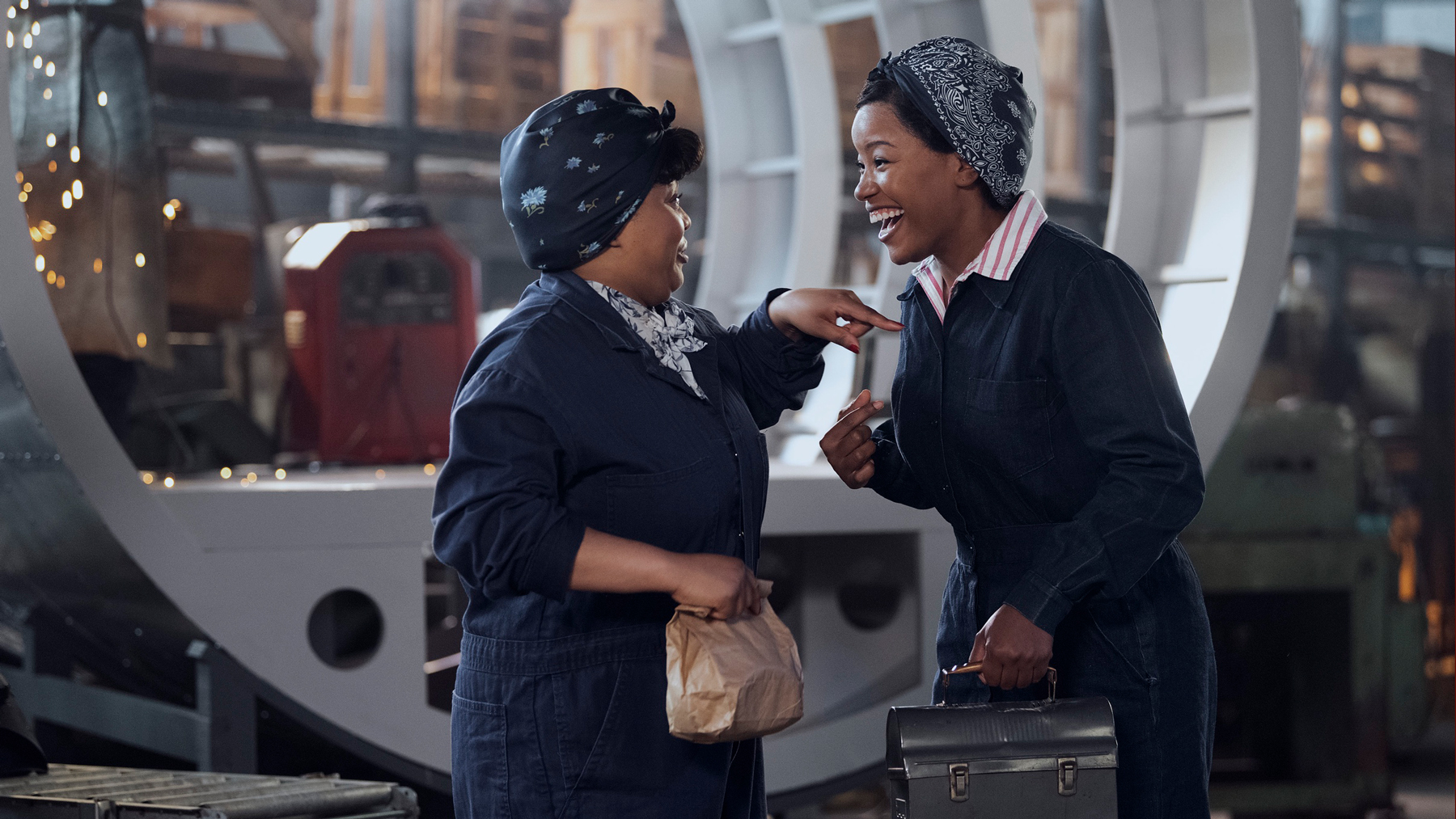 The main problem, though, is that even though Carson and Max are given various romantic and professional complications, both tend to feel more like symbols than people. The show does much better by supporting characters like Greta (Carden continually lights up the screen), Max’s comic book-loving best friend Clance (Gbemisola Ikumelo), or cocky Peaches pitcher Lupe (Roberta Colindrez), all of whom intersect with Jacobson and Graham’s thematic areas of interest but also have rougher and more human edges to them. When the story drifts over to the far corners of the field — say, swaggering Canadian player Jess (Kelly McCormack) trying to broker peace between Lupe and the monolingual Cuban immigrant Esti (Priscilla Delgado) — it feels emotionally richer than most of what’s happening around home plate with its main protagonists.

Or maybe the problem is that the show is simultaneously trying to remake the movie and act as a corrective to it. The quoted lines are a mixed bag, with the use of “There’s no crying in baseball!” feeling sadly obligatory, while a rendition of “Victory Song” from the All-American Girls Professional Baseball League arrives at the perfect moment. And the climax of the TV season’s final game is both touching and slightly distracting, almost playing as if it’s trying to subtly answer an unsolved mystery from the film.

The larger idea of what Jacobson, Graham, and company are trying to do with this beloved title is a noble one, and worth exploring. The movie is incredible, but it only scratches the surface of all the stories that could be told about female athletes in the Forties. But for all the potential of that idea for the show, the execution isn’t yet big league-worthy.

All eight episodes of A League of Their Own will debut August 12 on Amazon Prime Video. I’ve seen the whole season.

Coolio, Rapper and Actor, Dead at 59