A review of this week’s Ted Lasso, “Headspace,” coming up just as soon as I jazz scat…

The title of “Headspace” primarily points to this week’s Keeley-Roy plot, a very smart bit of business that creates a temporary hiccup in their relationship without undercutting what makes them such an entertaining and fundamentally happy couple. Roy is flourishing as one of Ted’s assistants, but because he and Keeley now work for the same team, there is no separation between their work and home lives. They are together all day, every day, and it is starting to drive Keeley mental, even though she loves being with Roy (emotionally and sexually) and the only thing he ever seems to be doing wrong is just… being there, all the time.

But it’s an episode where nobody seems able to get space, psychological or otherwise. Rebecca can’t get out of her own head long enough to reply to her mystery crush’s Bantr messages, even as she and Sam are literally bumping into each other in the stadium corridors. Ted spends most of his time in Dr. Sharon’s office acting like he’s trapped and needs to escape, even though he’s the one who went to her in his moment of crisis. And Nate the Wonder Kid’s mushrooming insecurities have left precious little room for the parts of his personality that made everyone so eager to see him succeed in the first place.

We open in territory resembling rom-communism, as Sonny and Cher’s “I Got You, Babe” plays over a montage of Keeley and Roy’s morning routine. It’s meant to evoke the most famous cinematic use of the song, Groundhog Day (which isn’t exactly a rom-com but still manages to make getting the girl part of the hero’s quest), and thus to quickly illustrate how monotonous Keeley has come to find 24/7 life with Roy. It’s almost like the famous fan chant about Roy — “He’s here! He’s there! He’s every-fucking-where! ROY KENT!” — has come to irritating, monkey’s paw life for her.

RS Recommends: What to Watch on Apple TV+ (and How to Stream it Free)

It comes across like a low-stakes story for a while — one of the times where Roy’s presence frustrates Keeley quickly leads to more sex — partly because Roy is oblivious to the fact that there’s an issue, partly because even Keeley doesn’t seem that troubled by it. Each time he pops into one of her jazz-scat chats with Rebecca and Higgins, her smile appears genuine rather than plastered on; she’s venting to her friends, but she’s still very much into him. But when Roy’s passionate reading of The Da Vinci Code interferes with her attempt to watch a classic Carrie-Aidan Sex and the City argument(*), all of her frustrations explode at once. One of the episode’s better running gags involves other characters pretending they weren’t just talking about Roy, followed by Roy not caring, because he’s Roy bloody Kent. But when he discovers the grievances Keeley’s been revealing about him, and how the other coaches and team management might now think of him, it’s his turn to explode, giving Keeley the thing she so desperately wanted in the worst possible way: alone time.

(*) It’s an installment heavy on vintage HBO nods, between the SATC scene paralleling what Keeley and Roy are dealing with, and the episode ending with the opening chords of Cream’s “I Feel Free,” which was memorably used in similar (albeit more homicidal) context late in The Sopranos Season One. 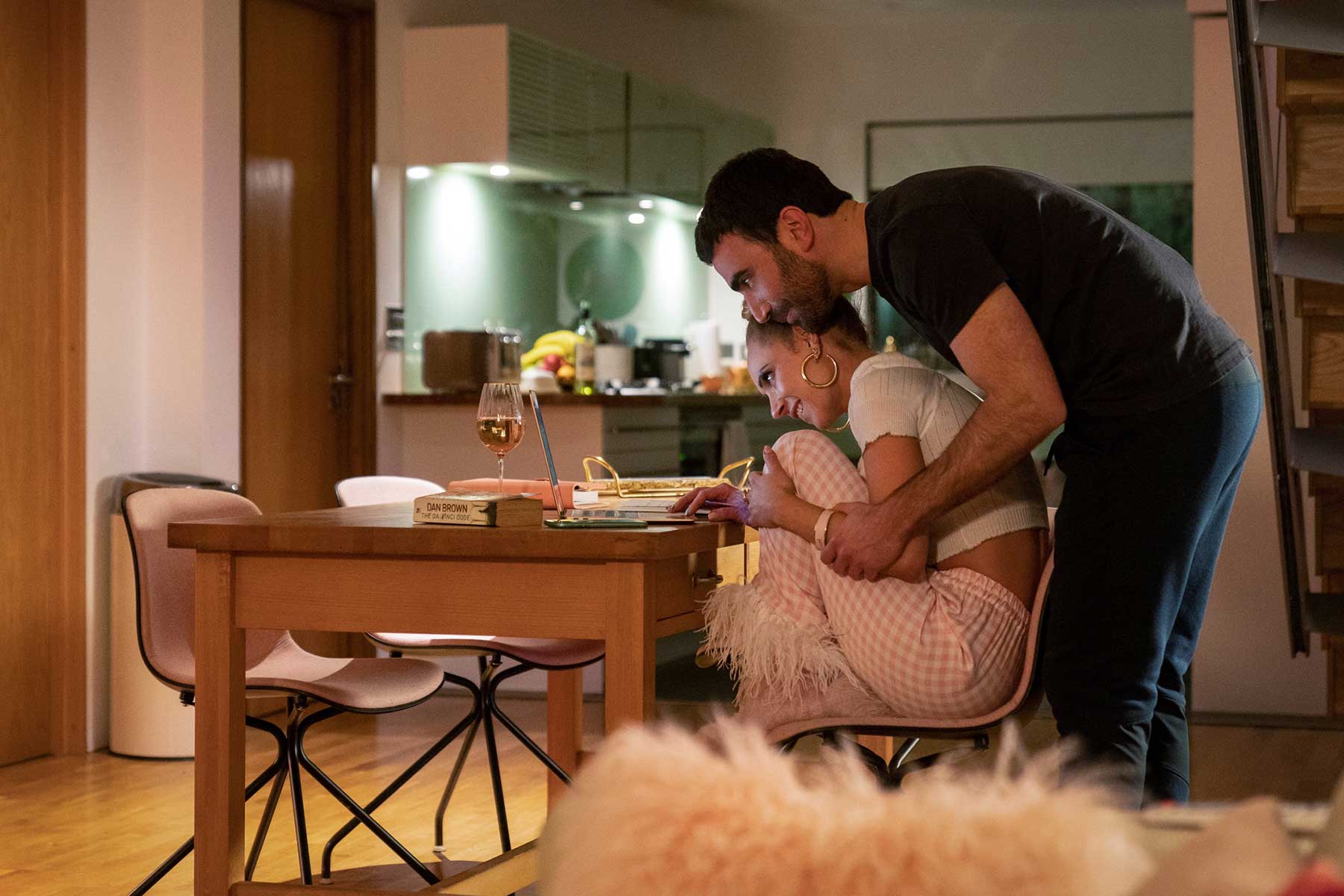 It’s an effectively uncomfortable scene in an episode that designed overall to be a bit lighter than last week’s. But as was the case earlier in the season, when Roy caught Keeley masturbating to his weepy press conference video, Roy — with some inadvertent help from Jamie and the other Richmond starters — quickly figures out that he was in the wrong, as well as the perfect gesture to make things better: setting up Keeley to take a relaxing bath and otherwise enjoy several hours free of him, with the knowledge that he’s not going anywhere, long-term. When the series began, you would not have expected Roy Kent to turn out to be the most romantic and sensitive man in all of television, yet somehow Brett Goldstein and all the other Ted writers have made him so, without diluting the things that are inherently funny about the character.

Roy and Keeley’s fight is the episode’s only self-contained story, while the other three subplots are all slowly simmering situations waiting to hit a boil. Despite last week’s breakdown, for instance, Ted is mostly trying to avoid the therapizing part of therapy with Sharon through various stall tactics, from the silly (trying different listening positions on her couch) to the openly hostile (accusing her of only caring about his feelings because she’s paid to), all while she patiently waits out his various tricks and tantrums. She knows he needs help, and that he is going to open up eventually, so all she has to do is lean against the ropes and weather his attacks and deflections. Sarah Niles is such a good foil for Jason Sudeikis because everything she does is so small and precise, while most of what he does as Ted (particularly in Ted-Sharon scenes) is so deliberately big and sloppy. It’s not hard to understand why Ted would be uncomfortable around Sharon beyond his larger distrust of her profession, and they spark so well together.

The Sam-Rebecca scenes this week are also largely a waiting game. Should they actually wind up dating after discovering each other’s identity, there’s the risk of the Keeley-and-Roy problem, but then some much bigger ones on top of that. Their age gap could be an issue, and then there’s the whole ethical — and very public — nightmare of a team owner being romantically involved with one of her players. But since neither of them knows who their Bantr pal is at the moment, they get to live in blissful ignorance about all of that for another week.

And finally, there’s Nate, who follows up last week’s triumph against Tottenham by becoming obsessed with the response to it. Even more than Nate’s bullying of Will earlier this season, it’s clear that this comes from insecurity rather than arrogance. This level of attention and praise is foreign to Nate, and as much as he is enjoying it, there’s a lot of imposter syndrome going on. He’s so used to being ignored or belittled — including by his own father, who is not the least bit impressed by the “Wonder Kid” newspaper headlines — that he’s clinging to each bit of praise like a starving man suddenly being offered a gourmet meal. And at the same time, he’s become more sensitive to criticism than ever. At first, his trash talk with Colin during practice seems playful and completely within the accepted standards of the team. But then he verbally dismantles the kid back in his office, with Coach Beard overhearing. Beard and Ted have ignored Nate’s treatment of Will, but a coach cruelly belittling a player who did nothing wrong is a bridge too far for our favorite chess player, and he orders Nate to atone for his mistake. Nate’s apology to Colin, and the team’s subsequent gift to him of a Will-made “Wonder Kid” Richmond jersey, briefly seems to smooth things over. But when his endless social media scrolling finally turns up a critical tweet(*), he responds by lashing out again at Will and threatening to make his life miserable.

(*) As with the lack of fallout over the Dubai Air protest, the fact that it takes so long for any ugliness to be aimed at Nate — now a very high-profile nonwhite coach in a sport with a lot of racist fans — feels a bit like wish fulfillment, even by Ted Lasso standards. If you’re going to engage with this stuff, you have to really do it.

If “Headspace” was lighter than “The Signal,” it also makes clear throughout that all is not nearly as well for the nice people of AFC Richmond going into the home stretch of Season Two as they would like to believe.