A review of this week’s The Mandalorian, “The Jedi,” coming up just as soon as I keep you around for luck…

There are episodes of The Mandalorian where not a lot happens in terms of the series’ larger arcs, and the thrill of it rests solely in how well executed the action set pieces are. Fortunately, the show is really good at that kind of thing. Then there are ones like “The Jedi,” in which a bunch of things happen that are hugely important to the mythos of the show, or of Star Wars in general, while also offering several sequences that kick ass and take names. I have no beef with the alleged “filler” episodes, but installments like “The Jedi” feel extra-special.

After last week’s detour to potentially set up a Cara Dune spin-off, Mando gets back to more pressing business by making his way to Corvus in search of Ahsoka Tano. “The Jedi” wastes no time both introducing her and establishing her bona fides as a figure worthy of all the excitement Clone Wars fans have been expressing since reports first came out that Rosario Dawson had been cast to play her. Dave Filoni, writing and directing this week, treats his old animated heroine as a ninja, moving through shadows and fog faster than should be possible, and cutting through the forces of Magistrate Morgan Elsbeth (Diana Lee Inosanto) like they’re hardly a bother at all. It’s a fantastic intro, both for viewers who know the character well from the cartoons and those who’d never heard of her three weeks ago. And even when she puts her twin lightsabers away, Dawson carries herself with the relaxed confidence of someone who doesn’t need to prove just how powerful and dangerous she is.

'Obi-Wan Kenobi': An Old Jedi Walks Into a Cantina (Stop Us If You've Heard This One Before)

The Magistrate, not realizing that Mando is searching for Ahsoka, tries pitting the two against each other. There’s an old tradition, especially in comic books, of heroes battling each other through a misunderstanding when they first meet, and Filoni surely could have gotten away with a much longer Mandalorian vs. Jedi fight. Instead, Mando is able to cool things down quickly so that Ahsoka can get to know Baby Yoda…

… or, rather, Grogu, as she discovers he was named.

The moniker is worth dwelling on for a moment, just because fans so quickly fell in love with the Baby Yoda nickname, while the show steadfastly insisted on calling him The Child. Bringing on Ahsoka, who knew the real Yoda, could have given the series a chance to make the nickname canon, with her saying something like, “My gosh, he looks just like a Baby Yoda!” Instead, after a bit of Force-enhanced communication, she identifies a completely different name — and not even one that starts with a Y. “Grogu” is a perfectly cute name in its own right (it sounds like baby talk), but will it stick with the fandom? After all, nobody in the audience calls our hero Din Djarin, though that name has only been mentioned briefly on the show itself. Whereas Ahsoka points out that Mando will have to say “Grogu” to get the kid to pay attention to him. It’s not quite The Mandalorian trying to make “fetch” happen, but this could be a very delicate situation going forward.

More importantly, story-wise, Ahsoka also figures out a lot of the kid’s backstory: He was trained by the Jedi on Coruscant, but was hidden before Palpatine had most of them slaughtered during Revenge of the Sith, and he has largely suppressed his powers out of fear of being found. And once she sees the strong bond between the kid and Mando, she becomes very reluctant to train him. That’s a choice that makes more sense, probably, if you know that Ahsoka apprenticed under Anakin Skywalker, and thus witnessed the problems created by his secret love for Padmé Amidala. She also has other business to attend to regarding Grand Admiral Thrawn (a popular character from the Star Wars Expanded Universe books who I gather eventually wound up in Filoni’s Star Wars: Rebels), and thus has no time to train and care for this adorable tyke. But she at least leaves open the possibility of another Jedi showing up to train Grogu, if Mando can get him to a temple on the planet Tython. As she notes, “There aren’t many Jedi left,” and it would probably overwhelm the narrative balance of this show if a young Luke Skywalker (or Leia, for that matter) were to show up to help out. So things now feel a bit open as to where the story is going next. 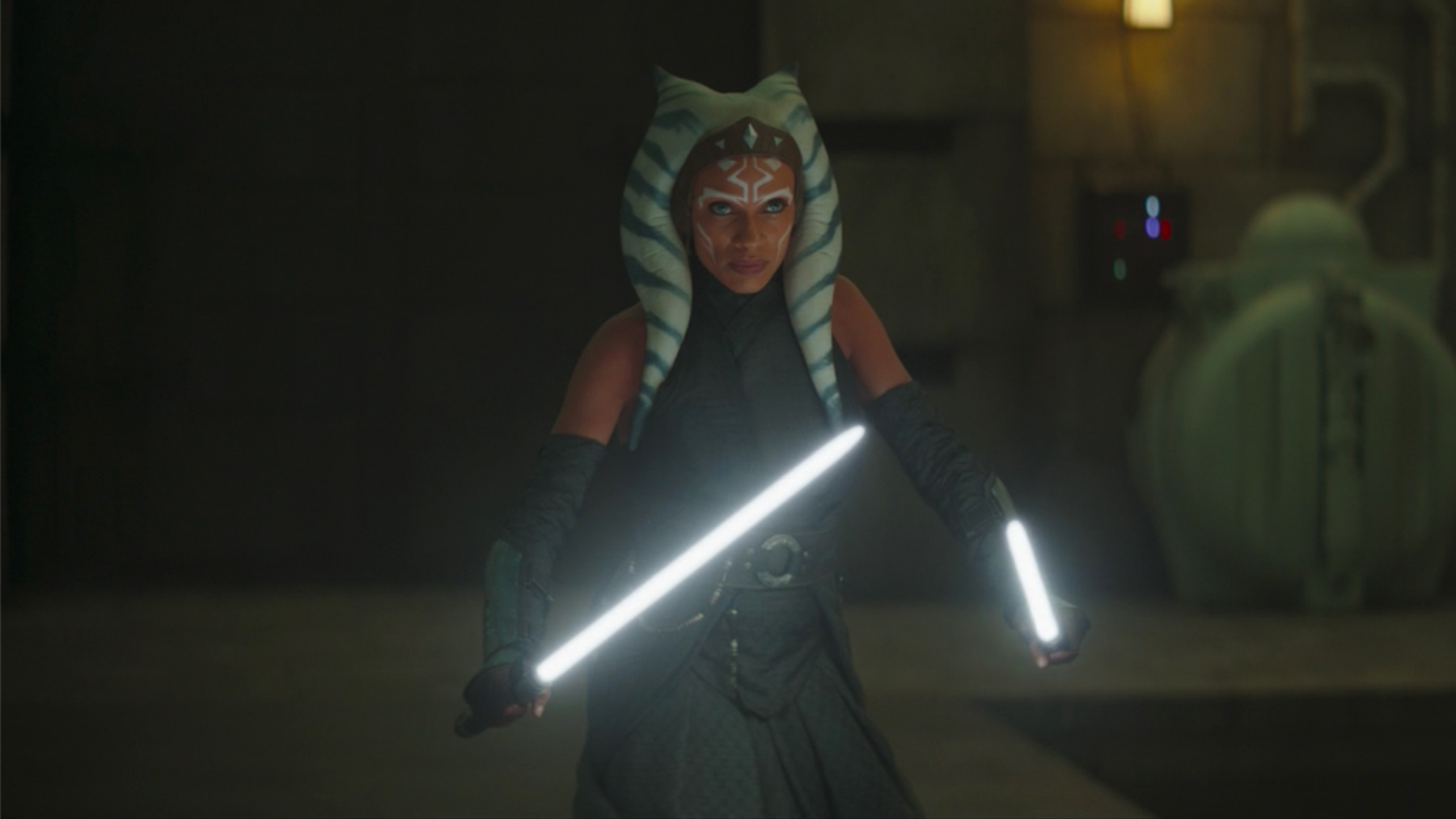 Even in an episode that revealed so much mythology, “The Jedi” didn’t shirk its Mission of the Week responsibilities. There was yet another village to be saved, this time from an Imperial remnant led by the Magistrate, with help from the mercenary Lang, played well by The Terminator star Michael Biehn. The Magistrate having a recognizable sidekick allowed the episode to give each hero their own big boss to defeat: Ahsoka in a well-choreographed lightsabers vs. beskar spear duel, Mando by being smart enough not to fall for Lang’s attempt to feign surrender and draw his backup blaster. All the fight scenes were terrific, with the terrain and the use of Ahsoka’s powers making them feel unlike anything the series has done so far.

Episodes like “The Jedi” feel important precisely because they’re so rare. I imagine Mando and Grogu (I’m trying, I really am…) will get sidetracked a time or three before they manage to complete the next step in their quest. And those stories will have plenty of nifty special effects and stunt work. But it’s reassuring to see that when The Mandalorian sets out to make a Big, Important Episode, it can pull it off so wonderfully.