King’s Landing. The Iron Throne. The Red Keep, the theme song, the sex and the violence, more platinum-blonde Targaryens than you can shake a Valyrian steel sword at. And dragons. Big, flying, fire-breathing dragons. Based on its premiere episode — you can’t properly call it a pilot, since the whole series was greenlit at once — House of the Dragon is taking a tried and true approach to its blockbuster predecessor Game of Thrones: If it ain’t broke, don’t fix it.

But was it broke? Ay, there’s the rub. Based on the Song of Ice and Fire series of novels by George R.R. Martin, Thrones broke viewership records, then broke many viewers’ hearts with a final season that proved as divisive as it was popular. For those who disliked Daenerys Targaryen’s descent into murderous madness, any series set in the same universe has a lot of work to do to win back their loyalty. And for those who appreciated the artistry and unflinching brutality of the show’s denouement — we’re out there! — any successor show has a mighty big Iron Throne to fill.

Thankfully, House of the Dragon’s first episode gives you the immediate impression that the show is going to do right by both camps. Created by Martin and Ryan Condal, who serves as showrunner with director Miguel Sapochnik, its heart beats with the blood of the dragon that you’d expect from a Thrones prequel, while striking unique notes of its own. Set 172 years before Daenerys’ birth, at a time when those giant winged serpents still roamed the skies, the premiere stars Paddy Considine as King Viserys I Targaryen, the affable but weak successor to the realm’s most beloved king. (The Iron Throne itself keeps wounding him, which doesn’t bode well.) Chosen as heir by nobles over his elder female cousin Rhaenys (Eve Best), Viserys presides over a quarrelsome court.

How to Watch 'House of the Dragon': Stream the 'Game of Thrones' Prequel Online

'House of the Dragon' Recap: Meet the New Bosses

His council’s most notable members include Rhaenys’ husband Corlys Velaryon (Steve Touissant), a rich and famous sailor dubbed “the Sea Snake”; Otto Hightower (Rhys Ifans), the advisory Hand of the King; and Viserys’ own brother Daemon Targaryen (Matt Smith), a rogue prince placed in charge of the King’s Landing cops known as the City Watch, whose brutality would make even a modern-day police chief blush.

These royal advisors view neither his brother nor his sole surviving child, a daughter named Rhaenyra (Milly Alcock), as appropriate heirs. So Viserys has placed all his hopes in the latest pregnancy of his wife Aemma (Sian Brooke). After several miscarriages, stillbirths, and deaths in the cradle, could she at last bear him the son and heir he desires?

Viserys holds a massive tourney in celebration of the impending birth. The bloody affair thrills Rhaenyra and her best friend, the Hand’s daughter Alicent Hightower (Emily Carey), even though Rhaenyra’s slightly-too-friendly uncle Daemon is beaten by a dashing young knight named Ser Criston Cole (Fabien Frankel). Fate, however, is determined to ruin the day. Aemma’s child is a breech baby, and in his desperation, Viserys consents to a Caesarian section — a procedure that saves the life of the infant but serves as a brutal execution of the mother. Much like the violence of the tourney, the surgery is shown in unflinching detail, even as Aemma panics and screams for her life. 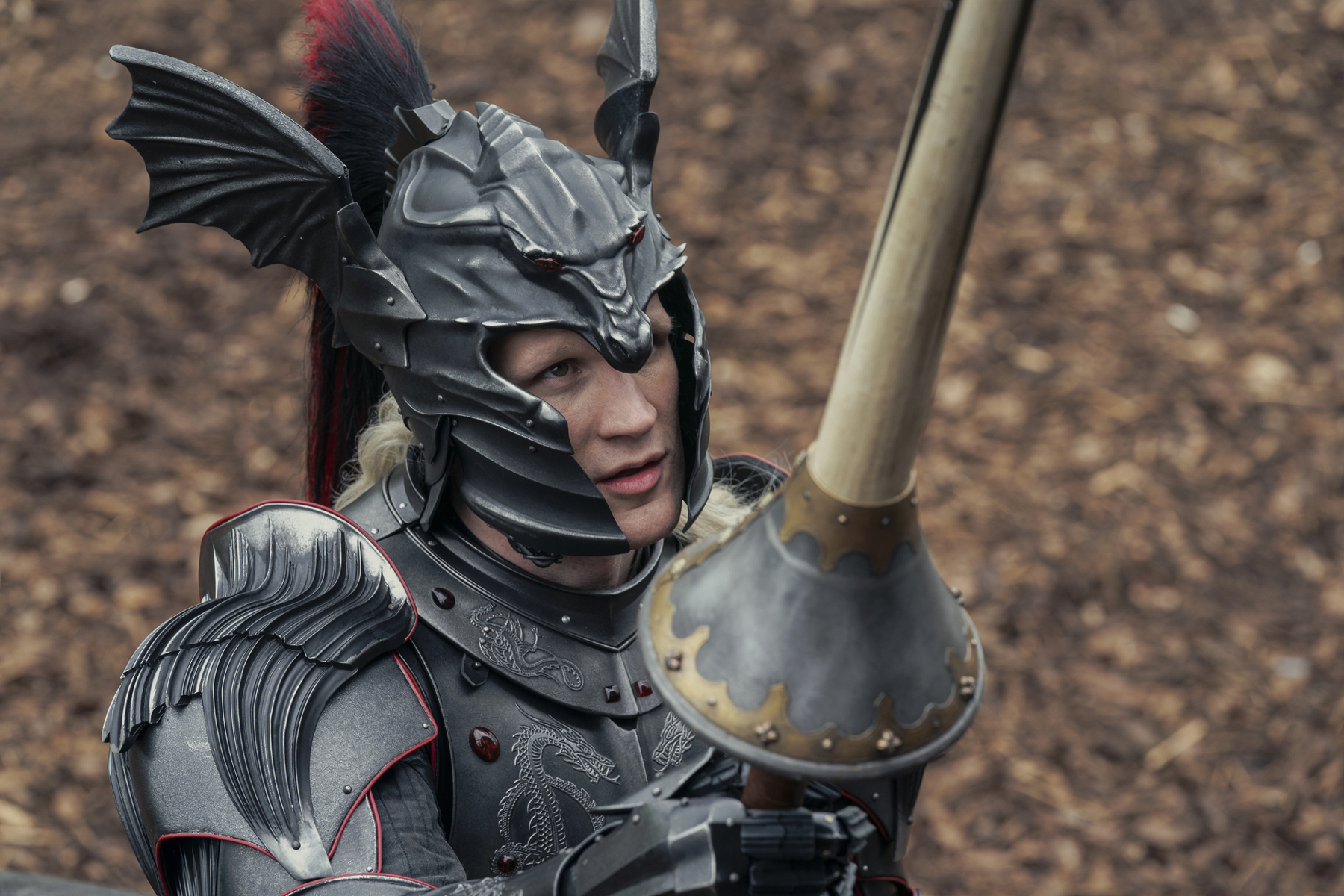 But it’s all for naught. The baby, a male heir, survives for only a day after his mother’s death, and the pair are cremated together by Rhaenyra’s dragon Syrax. Daemon, happy to be the only male heir in town, celebrates with his men and his favorite belle du jour Mysaria (Sonoya Mizuno) in one of the capital city’s many “pleasure houses.” When word gets back to Viserys via Daemon’s nemesis Otto Hightower, the king banishes his brother from the city — both for mocking the death and, it seems, forcing him to make another impossible choice between family members. He then declares Rhaenyra his true heir.

As all the lords of the realm gather to swear fealty to the king and the princess, Viserys confides in Rhaenyra about the prophetic dream that drove their ancestor Aegon the Conqueror to claim the Seven Kingdoms of Westeros: “The Song of Ice and Fire,” a vision of the deep dark winter destined to wipe out the world of the living unless a Targaryen stands against it. (Sound familiar?) Meanwhile, Otto sends his daughter Alicent to cozy up to the grieving king. What could go wrong?

It’s no secret that the answer is “a whole lot.” House of the Dragon is based on Martin’s novel Fire & Blood, a faux-historical tome that details the first two centuries or so of Targayren rule in Westeros. Its primary concern is a bloody inter-family war known as “the Dance of the Dragons,” and the show is slated to follow suit.

But that’s all in the future. For now, there’s already plenty to marvel at — the uniformly excellent cast, for starters. Considine is marvelous as Viserys, a man who simply wants to be liked by everyone, an impossibility for someone in his position. Alcock is similarly impressive as the young Rhaenyra, caught in limbo between the freedom she enjoys and the power she’s beginning to realize she desires. Toussaint and Ifans make strong impressions as the king’s most powerful counselors, ever at odds. And Smith is a revelation as Daemon — both a brute and a sensualist, who’s able to privately smile at his rival’s insults even as he plots to defeat them.

Throughout the episode, Condal and Sapochnik brilliantly build on what has come before. Everything looks familiar, but bigger, grander, more ornate than what we first saw in Game of Thrones’ earliest episodes. The tourney is massive. The armor is fancier and, frankly, much cooler; Daemon’s dragon-headed helmet deserves special mention here. The costumes are elaborate yet somehow more ancient-feeling, despite the setting’s entirely invented history.

And to its great credit, the show does not shy away from the hard-R content that made its predecessor both famous and infamous. From Smith and Mizuno’s nudity in the brothel to the horrifying birthing scene — not to mention the gelding of a rapist whose severed junk earns its own closeup — House of the Dragon appears determined to live up to the provocative reputation of the series that spawned it. To all of this, we offer a hearty Westerosi huzzah!

For all its attendant controversy, Game of Thrones remade the fantasy genre for adults, and the show’s messages about the horrors of war and humanity’s tragic inability to unite in the face of common threats are more salient than ever. With its images of police brutality and the treatment of women as little more than birthing receptacles, House brings its own grim 2022 topicality to the table. Add that to the strong performances and powerful images, and you’ve got a new series worth swearing your allegiance to.