This post contains spoilers for the season finale of The White Lotus, which is available now on HBO and HBO Max.

Last Monday, fans of The White Lotus were greeted with exciting news: HBO and Mike White had agreed to make another season, albeit one set at a new locale within the fictional White Lotus resort chain, and with different characters. This is not surprising. White designed the show to be largely pandemic-proof, since the cast and crew can take over a real resort together and create their own bubble for production. Plus, White Lotus has been the talk of the TV summer — a populist hit for a filmmaker who tends to make very niche products. When I posted the news on social media, a lot of people responded to ask if Murray Bartlett could just reprise his role as Armond, the resort manager of this first season, since Bartlett turned Armond’s rising hatred of his guests into a comic symphony.

Alas, this will not be possible. The series premiere opened in medias res, with Jake Lacy’s Shane sitting forlornly at the airport at the end of his vacation while a coffin was loaded onto a plane heading back to the mainland. The question of who would die, and why, hung over the otherwise very low-key adventures of Shane and Rachel (Alexandra Daddario), Tanya (Jennifer Coolidge), and the Mossbacher family (Connie Britton and Steve Zahn as couple Nicole and Mark, Sydney Sweeney as their daughter Olivia, Fred Hechinger as their son Quinn, plus Brittany O’Grady as Olivia’s friend Paula). Seemingly banal moments throughout the season were now rife with tension. Would Mark’s cancer fear prove real and urgent? Would Tanya’s new boyfriend Greg (Jon Gries) cough himself to death? Would one of Mark and Quinn’s scuba lessons go horribly awry?

Instead, the body in the coffin would prove to be Armond, who’d already suffered a terrible, horrible, no good, very bad week at the White Lotus. It began with Shane objecting to being placed in an infinitesimally less fancy suite than the one his mother booked. Things got worse when Armond’s discovery of Olivia and Paula’s pharmaceutical stash ended years of his sobriety. Finally, it all seemed to wrap up with Armond losing his job at the resort. When he invited bellboy Dillon to join in one last orgy of drugs and sex in his office, the young staffer asked if it would be a kamikaze mission of some kind. This would prove unfortunately true: the drug-fueled mania inspired Armond to break into Shane and Rachel’s new suite and literally shit in their luggage(*). Unfortunately, he was still in the room when Shane — primed to fend off an intruder after the Mossbachers were robbed in an earlier episode — returned, grabbed the giant knife meant for carving up the Pineapple Suite’s signature fruit, and stabbed the intruder to death.

(*) I imagine White thought he might be breaking new televisual ground with this onscreen defecation, but FXX’s Dave beat him to the punch by more than a year. But it’s OK. As you may have heard, everybody poops.

RIP, Armond. It’s not fair to call him too good for this world, since he was introduced as a flawed and blinkered man who didn’t even notice the pregnancy of a new employee until she went into labor, and who did, in fact, screw up by double-booking the Pineapple Suite. (Among the smartest choices White made was to make Shane a juvenile, narcissistic idiot who was nonetheless right about almost everything: Armond did screw up about the suite, Shane never lied to Rachel about who he was or what he wanted out of their relationship, etc. It’s a level of nuance that made Shane’s antics both more interesting and slightly easier to endure as a viewer.) But he was determined to go out in a blaze of glory, and he did, including a beautiful, almost balletic final seating of the hotel’s dinner guests, followed by a death that will be the talk of the resort’s staff for as long as the place stands.

While Armond suffered the most permanent punishment, the finale, and the season as a whole, was all about showing how these wealthy, oblivious guests treat service workers like him, Belinda (Natasha Rothwell), and Kai (Kekoa Kekumano) not as people, but as tools to improve their own lives, consequences to the others be damned. 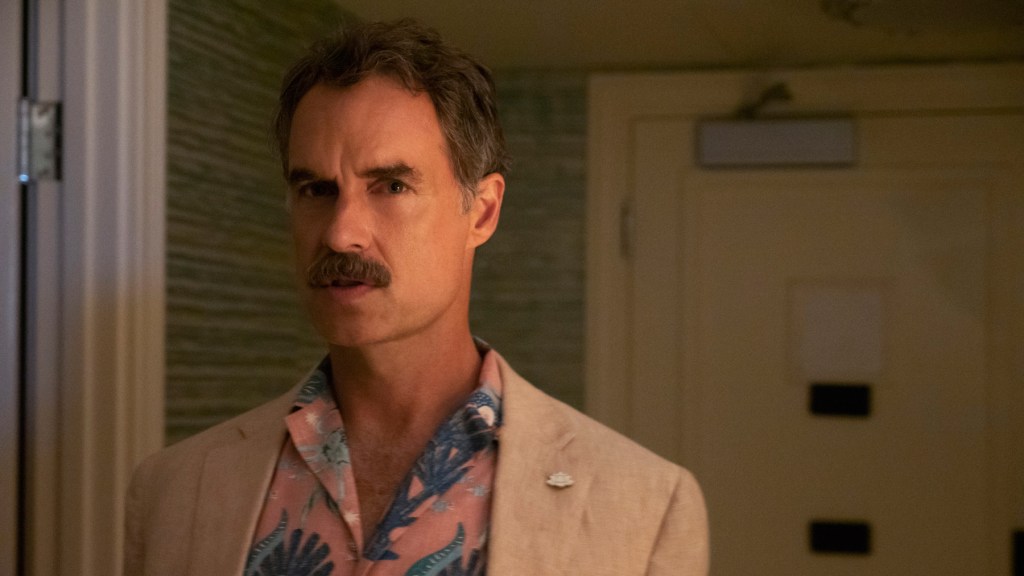 Earlier, Paula had convinced Kai to rob the Mossbachers so he could hire a lawyer in an attempt to gain back the land the resort stole from his family as part of an eminent domain claim. But it’s clear that her motivation was less about helping Kai than about punishing the rich family of her controlling, white frenemy Olivia. The plan backfired horribly: Kai is caught and will spend a long time in prison; Mark and Nicole find a new spark in their marriage following Mark’s attempt to fight off Nicole’s attacker; and Olivia stopped heckling her family and started acting like a happy member of the clan(*), leaving Paula wracked with guilt over what she did to Kai.

(*) Between Everything Sucks!, The Handmaid’s Tale, Sharp Objects, Euphoria, and now this, Sydney Sweeney is crafting an impressive resume at the start of her career, as capable of being vulnerable and sympathetic as she is of being someone you’d be terrified to run into in a dark alley. Olivia’s a mix of both: a snickering mean girl who was also obviously made this way through the inattention of her awful parents, and whose worst behavior can often be read as insecurity run horribly amok. Jennifer Coolidge and Murray Bartlett do incredible things with this season’s flashiest roles, but don’t sleep on Sweeney.

Belinda, meanwhile, spent most of the season comforting the grieving Tanya, who kept the spa manager joined to her hip with promises of financing a wellness center that Belinda could run. Instead, Tanya fell for Greg and decided to follow him back to Colorado. Her time with Belinda taught her that all the relationships in her life are transactional, with her using her money to control people; but in this case, Belinda seemed perfectly content to be controlled if it meant she could start her own business. Instead, all she got out of it is a brick of cash that doesn’t seem like nearly enough to fulfill her dreams.

Belinda’s bitterness in turn led to her choosing not to help Rachel in a moment when Rachel very obviously needed encouragement to walk away from Shane. Instead, Armond’s shocking death — which the police rightly rule a case of self-defense (even if we are sympathetic to Armond) sends her running back into her d-bag husband’s arms at the airport. They don’t really care that a man died to temporarily patch up their fundamentally broken marriage, and it’s not hard to imagine Shane dining out on the story of his heroism for years to come. He has lived an entire life free of consequences, and that streak seems likely to continue unbroken.

The only guest who made it through his stay both appreciating the experience and not ruining someone else’s life was Quinn Mossbacher. Forced to sleep on the beach rather than endure Olivia’s bullying, he bonded with a group of locals who offered him a spot on their boat, paddling from Hawaii to Fiji. Where Quinn began the trip glued to his devices, by the end all he wanted was to stay in Hawaii forever and get in the water with his buddies. He appreciated the beauty of their surroundings — when he and Mark finally took their scuba trip, he was entranced by a giant turtle that looked an awful lot like the one Mike White used as a recurring motif on his previous cult classic HBO series, Enlightened (a show I hope a lot of White Lotus fans are putting in their HBO Max queues right now) — and looked on the staff and island natives as people rather than convenient objects. (Arguably, he’s using them to escape his garbage family, but only because he genuinely likes the group, and vice versa.) It’s not hard to imagine the Mossbachers hopping off the plane once they realize Quinn didn’t board with them — or, more likely, them having to turn around at the next airport, because they’re too self-involved to notice at first — but White Lotus Season One opts to end on a relatively upbeat note after all the satirical bleakness that preceded it, with Quinn out rowing with his pals, sunlight hitting the Pacific perfectly, all OK with their world for this beautiful moment.

Of course, that shot of the boat comes only moments after we see Belinda plastering on a smile as she and Armond’s replacements greet a new round of guests, so it’s not as if White wants her, or anyone else, to forget the point of this very smart, class-conscious series. The story of this season of White Lotus was impeccably told, and didn’t need a sequel. But turning the title into a seasonal anthology a la American Horror Story seems a much better idea than, say, trying to generate a second season of Big Little Lies. Our world does not lack for either terrible rich people or beautiful places. And after a career spent mostly making arthouse fare, it’s hard to blame White for wanting to take himself on another expensive trip — especially since we’ll get to come along for the ride.

Raskin Confirms: Jan. 6 Committee Is ‘Aware of’ Call from White House to Rioter During Insurrection