“What if I just showed you four episodes of This Is Us, without explanation?” Jordan Peele asked, and most of the crowd in Austin’s Paramount Theatre cracked up. As for the rest of the patrons, you could almost feel them shudder — this portion of the audience wasn’t just here to see SXSW 2019’s opening night movie, Us. They wanted to see him deliver on the promise of Get Out, to beat the sophomore slump and deliver hardcore no-frills horror, and, like, don’t even joke about switching out your latest creepfest with a TV drama that prizes tears over fears. The seriousness of their anticipation was almost daunting. Here we are now; scare the shit out of us.

They need not have worried about the last part. No, Peele hasn’t lost his sense of humor: The Oscar-winner introduced Winston Duke by saying “You can’t be M’Baku after this, man.” When young actor Evan Alex stood up after his name was called, head barely above the fray, the director told us, “He is standing, I assure you.” That was soon followed by: “Speaking of assholes … Eric Heidecker, ladies and gentlemen!” His showmanship was on point, and you understand why, despite the insistence that he wants to simply be behind the camera now, Peele’s a perfect host for his upcoming Twilight Zone reboot.

But if his latest film proves nothing else, it’s that Get Out was not a fluke and the former sketch comedian is not a horror-movie dilettante — as if that really needed confirming. And while this story of a family who find themselves staring down homicidal dopplegängers has its share of laugh-out loud moments, the man has doubled down on the sharp-shock intensity. Us is terrifying. It is extraordinarily made, impeccably composed and paced, completely in control of how out of control it gets and genuinely seat-soiling scary. It’s not the second coming of Hitchcock or Carpenter or Craven or Polanski. It is the new Jordan Peele movie, a concept that should now make you just as giddy as works from any of those aforementioned auteurs. He’s in this for the long haul.

The All-American Nightmares of Jordan Peele

Lupita Nyong'o on the Mysteries of Jordan Peele's 'Us'

[If you want to go into Us colder than a polar vortex, stop reading here. Spoilers are going to follow, as you know they must. Return once you’ve seen the film in a few weeks, and then read this from as many varied I.P. addresses as humanly possible. The rest of you should consider yourself warned.]

In 1986, stuck between bickering parents at the Santa Cruz Beach Boardwalk, a young girl wanders away from the Whack-a-Mole games and Tilt-a-Whirl rides. She discovers a funhouse-like attraction called “Visionquest” tucked away near the shore. Upon entering, she becomes lost in a hall of mirrors — the first of many doublings and quadruplings the movie has in store for us. Then, while searching for an exit in the dark blue light, she backs up and another girl appears behind her. This is not a reflection. This … is something else. Something capable of inspiring a blood-curdling close-up of the child’s face, frozen in fear.

Decades later, the girl, named Adelaide, is now a woman — in fact, she’s Lupita Nyong’o, meaning she has won the modern-beauty lottery — and is going on vacation with her own family. Her husband, Gabe (Duke), is a genial goof; their kids, Zora (Shahadi Wright Joseph) and Jason (Alex), are a typically combative teen and an obnoxious tween, respectively. Settling into their Northern California summer house by the lake, they plan on taking a much needed break. Gabe also wants to meet up with some old friends (Heidecker and Elisabeth Moss) and their twin daughters who are staying nearby as well, at … the Santa Cruz Boardwalk. The whole idea of returning here makes Adelaide extremely uneasy. So does her son momentarily getting lost, just like she did years ago, once they get there. Chill out, Mom, he’s only strolled down the beach a bit. And also, he’s seen a strange figure standing out in the sand, away from most folks, arms outstretched.

So far, so cryptically creepy. Then, as folks who’ve seen the trailer know, a mysterious quartet appears in their driveway that night. All four of them are decked out in red jumpsuits. Most of them, we find out soon enough, are brandishing scissors. What also becomes apparent, as the millions of people who breathlessly watched the first clip that dropped on Christmas may remember, is that they’re all dead ringers for one of the family members. It’s at this point that Us settles into a cozy little home-invasion/siege-thriller mode, with Adelaide and Co. suffering abuse and torture at the hands of their Bizarro-world counterparts. “What are you people?” she asks. Her double, cursed with a raspy voice and a feral menace, replies: “We’re Americans.” Boom. 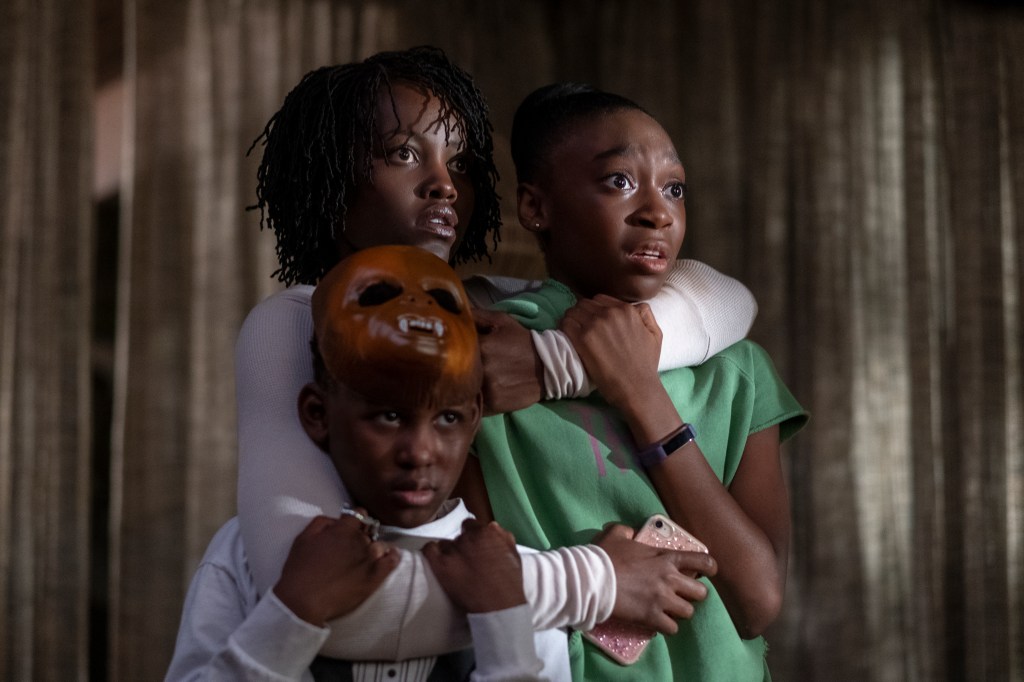 The blatantness of that buried-lede line, a didactic bit of dialogue mic-dropped roughly before the halfway point of the movie, feels completely off-balance with what we’ve seen up to that point. But by the end of the movie, assuming you have not passed out from fright after the tide of violent impalings, slicings, bludgeonings, guttings and overall sense of WTF mayhem that’s in store, you realize what a necessary peek into Peele’s mind it offers. Us is a horror movie, one with an insane amount of reflective surfaces, callbacks, recurring motifs and stylistic touches. There’s a high-degree-of-difficulty bar for the actors to meet (which they all do — especially Nyong’o, here giving her two best performances to date) and a display of filmmaking prowess that seems uncanny for someone only on their second feature film. A whistle appears first as bone-chilling farce, then repeats itself as heartbreaking tragedy. Even the grace notes, like a casual overhead shot of the family walking along the beach with their shadows trailing behind them, suddenly takes on a larger meaning in the long run.

It also has, for good measure, bunnysploitation and burn scars and biblical verses and the sort of batshit set-piece needledrop that will forever color how you hear the Beach Boy’s “Good Vibrations.” Ditto an end twist that feels both sinister and a tad superfluous. The man wants to play viewers like a harmonium by nay means necessary. Mission accomplished.

Yet he’s also given us an extremely dense genre movie, rife with allusions not just to other films (so many Shining shout-outs) but to our nation’s nightmarish past — and, naturally, our extremely conflicted present. Some of it seems purposefully buried under tectonic layers of tropes, all the better to nestle into your subconscious, my dear. Some of it seems ironic, like a Hands Across America reference that seems like a red herring until it doesn’t. Some things, like an opening disclaimer about thousands of miles of unused tunnels across the continental U.S., is a tonal touch that also can’t help but bring to mind the Underground Railroad. The subtextual specter of slavery haunts the film like a ghost. So do various other original sins and social injustices of both the 20th century and 2019. That “Americans” line isn’t a screenwriter spelling it out. It’s a signpost.

Like Get Out, Peele is mining and manipulating horror’s ability to delve into deeper, heavier things under the guise of thrills, spills and chills. Unlike Get Out, what’s being examined isn’t something highly focused but much more diffuse. It’s not a film about race per se, which many were expecting after that last visit to the Sunken Place — except it’s about America, so of course it’s about race. His revenge-of-the-repressed movie just takes it one step further, sideswiping a national mindset that often feels fueled by dissension, conflict, tearing itself in two. The appearance of Jeremiah 11:11 on a holy roller’s cardboard sign feels like just another sly joke (good ol’ numerical doubling — also, take another look at the picture up top, and what does the foursome resemble?). Until you look up the verse itself: “I will bring on them a disaster they cannot escape. Although they cry out to me, I will not listen to them.” Suddenly, the eerie last third of the film begins to feel even more apocalyptic. We’ve done this to ourselves. We’ve seen the enemy, and it is ….

It was a notion that Peele himself expressed when asked an inevitable question at the post-screening Q&A about what the film was about, or rather, what he was trying to say. Standing next to his cast members and with the loud applause still ringing in his ears, the writer-director hemmed and hawed about wanting people to have their own ideas of what Us is about. (And you will. It’s that kind of film.) But then he backtracked and mentioned that as he was writing the film, his mind was consumed with how we live “in a time where we fear the other .. whether we think they’re taking our jobs or that they voted differently than we did.” He paused for a second, then continued: “Maybe the monster has our face. Maybe the evil is us.”