This post contains spoilers for the first two episodes of The Marvelous Mrs. Maisel Season Four, which are now streaming on Amazon Prime Video.

Late in the second episode of The Marvelous Mrs. Maisel‘s new season, the show’s title character — Miriam “Midge” Maisel (Rachel Brosnahan), a housewife-turned-comedian in the late Fifties and now early Sixties — gets kicked out of a nightclub for upstaging the male acts who got booked instead of her. Drunk and bitter on the sidewalk, she rants about trying to give people a good time, and approaches would-be patrons with the offer to perform for them for money. The cops misunderstand what she’s saying and arrest Midge for solicitation, while her aghast manager Susie (Alex Borstein) groans, “Fucking here we go again!”

Susie remembers very well that Midge’s very first public comedy performance ended in arrest — that time it was for drunkenly flashing the audience — so she can’t be blamed for rolling her eyes at her client/friend/royal-pain-in-the-keister getting into the same kind of trouble years after they started down this road together.

Nor can Marvelous Mrs. Maisel fans be blamed for feeling just as exasperated by how much the start of this new season feels like the series wandering in circles.

Maisel Season Three — which ended more than two years ago — was all about the pursuit of change. Midge spent the season working as a headliner for superstar soul singer Shy Baldwin (Leroy McClain), playing bigger rooms and appearing on the brink of a real career breakthrough. Susie took on a second client, Midge’s superstar rival Sophie Lennon (Jane Lynch), and attempted to fulfill Sophie’s dream of demonstrating her acting chops in a Broadway production of Strindberg’s Miss Julie. Midge’s parents Abe (Tony Shalhoub) and Rose (Marin Hinkle) gave up Abe’s job and Rose’s trust fund and had to move in with their obnoxious former in-laws while Abe figured out a new direction for his life. Midge’s philandering ex-husband Joel (Michael Zegen) decided to follow her into showbiz by opening a nightclub in Chinatown — and also drunkenly remarried Midge while visiting her on tour in Las Vegas, not that anyone on or around the show seems to remember this at the moment. And in the course of traveling the country with the Black, deeply closeted Shy, Midge was forced to realize that there was a wider and more complicated world out there than the sheltered Upper West Side Jewish enclave she grew up in, and that she was still incredibly privileged, despite the end of her marriage.

'The Marvelous Mrs. Maisel' Is Back: How to Watch Season Four Online for Free

Midge Is Ready to Speak Her Mind in 'Marvelous Mrs. Maisel' Season Four

Most of that gets thrown right out the window over the course of these first two episodes. Having been kicked off the European leg of Shy’s tour for implicitly joking about his sexuality during a performance at the Apollo late last season, Midge decides she’s had enough of trying to succeed in comedy on anyone else’s terms. The “tight 10” routine she spent so much time perfecting in previous seasons? Gone. No more opening for other acts, no compromising. Nothing but Midge Maisel up on a stage, saying whatever the fuck (and she is cursing up a storm throughout these episodes) is on her mind at that particular moment, and theoretically speaking truth to power. With help from Joel’s father Moishe (Kevin Pollak) — and some chicanery involving her income from the Baldwin tour, Susie’s gambling problem, an insurance fire, Herc from The Wire, and other things that are probably best not to think too hard about — she repurchases the apartment where she and Joel once lived, and invites Abe and Rose to move in with her. Susie decides to get out of the Sophie Lennon business for good, though Sophie — riding out the humiliating response to her Miss Julie opening night(*) in a sanitarium — seems reluctant to end their business arrangement. If not for Joel’s continued success with the nightclub — more successful than his shady landlords (and parents of his girlfriend Mei, played by Stephanie Hsu) would like — and Abe’s ongoing pursuit of a career as a theater critic, it would feel as if Maisel creator Amy Sherman-Palladino and her husband/collaborator Daniel Palladino had thrown out almost everything that happened in the second and third seasons.

(*) Not to pick at a scab that’s long since grown over during the long wait between seasons, but the opening-night Miss Julie crowd loved it when Sophie abandoned the script and began doing her usual vaudeville shtick. Her stage fright may have cost her the theater establishment respect she so craved, but (much like Springtime for Hitler in The Producers), her version of Miss Julie sure seemed like it could have run profitably for years, pleasing her backers if not her critics. As with some of Midge’s own professional ups and downs, the fallout from the production doesn’t seem wholly thought through.

The biggest change this week is simply that there are only two episodes to discuss. Like all of its streaming competitors, Amazon is learning that many shows are not best-served by bingeing, and will be presenting two Maisels per week over the next month. This is something of a relief, as the familiar and relentless rhythm of the Palladinos’ brand of humor could be wearying when attempting to sit through a whole season over a few days. But even doled out more carefully, the extended Maisel clan can be a bit much, particularly in a headache-inducing scene in the first episode where everyone screams at each other from separate cars on the Wonder Wheel at Coney Island. 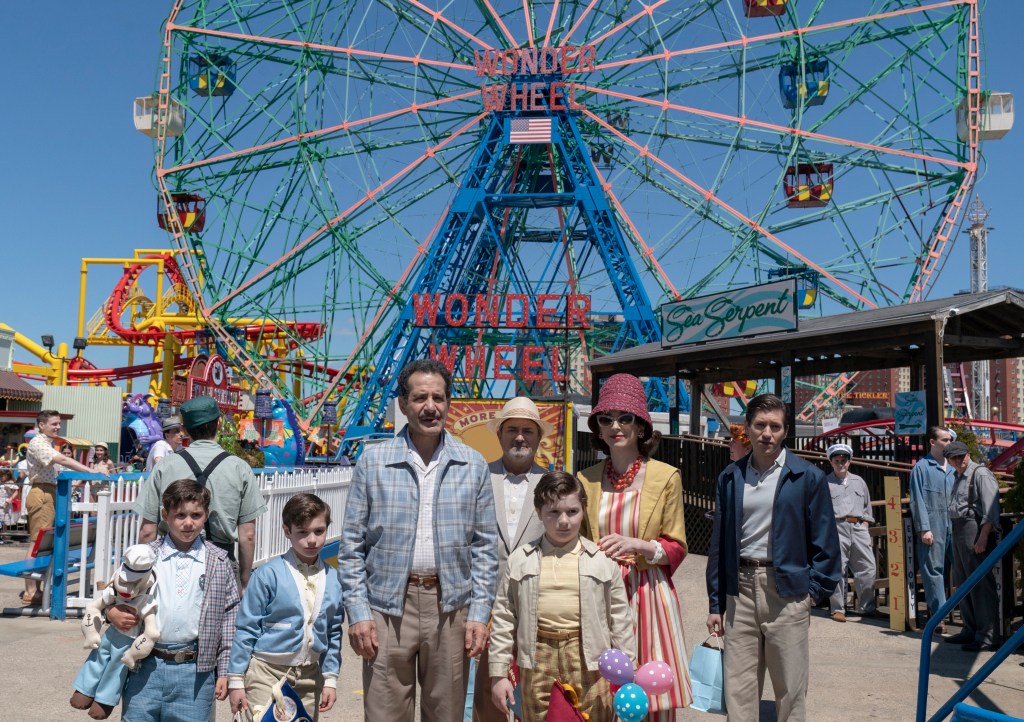 Parts of this creative retrenchment feel temporary, or designed to make Midge accept that she can’t just rewind her life whenever she feels like it. She almost instantly comes to regret letting her parents move in with her — and to take credit for repurchasing the apartment — and is already running into trouble re-establishing credit with all the stores in the neighborhood that she used to patronize when she and Joel were flush(*). Whether or not Susie is able to extricate herself from Sophie, Sophie’s ex-manager Harry (David Paymer) is again encouraging her to take on more clients rather than pinning her future entirely to Midge.

(*) The apartment scenes also bring back Bailey DeYoung as Midge’s best friend Imogene, the rare character on the series for whom the Palladinos have somehow decided less is more. DeYoung previously co-starred in Sherman-Palladino’s Bunheads, and she helps give Imogene among the highest comedic batting averages of anyone on the show. Yet she appears sparingly, while too much never seems to be enough for characters who are either dull (Joel) or more grating (Joel’s parents). Imogene doesn’t serve as much of a narrative purpose as those others, but that’s never stopped Sherman-Palladino in the past (especially on Gilmore Girls, which made nearly as many episodes in one season as Maisel did in its first three) if someone’s funny.

If the season is actually building toward Midge accepting that she can’t simply turn back the clock to those madcap Season One days, that idea has the potential to be interesting. The problem is that once Midge ended things with Joel and entered the comedy world, she’s actually been the character most resistant to change. She believes herself to be fundamentally wonderful and charming, and assumes that should be enough for anyone. To a large degree, the show feels the same way about her and rarely challenges her blinkered worldview. Whatever attempts Season Three made to broaden her horizons seem to have been abandoned in these new episodes, where she comes across as unrepentant about the Apollo routine, and somewhat confused about why it so upset Shy Baldwin and his manager.

Based on past experience with both this show and the larger Palladino catalog, expecting fundamental change to either the series or its main character at this stage feels like a fool’s errand. (And that’s leaving aside the nagging Studio 60 Problem: both Midge and the show are much funnier when she’s offstage than when she’s allegedly killing it in front of club audiences.) By now, in any series’ lifespan, it usually is what it is, and one created by Sherman-Palladino more than most. No one streaming these episodes was going to be surprised by the existence of the Wonder Wheel yelling scene, whether or not they loved it, because that’s just part of the deal by now. But Season Three seemed to be pushing against those tendencies in both the creative team and their heroine, so it’s disappointing to see that path being so quickly abandoned, at least for now, if not for good.

After getting banned by the club late in that second episode, Midge and Susie wind up backstage at a burlesque show whose warm-up comic is bombing. Susie sees a venue she’s eager to leave as soon as humanly possible, but Midge clearly sees an opportunity. The audience is there to ogle topless women, but you can understand what she’s thinking — and not just because her unofficial inspiration, Joan Rivers, also performed at strip clubs early in her career under the stage name Pepper January. It’s a setting where she won’t be at risk of arrest on public indecency charges, and can curse at length without offending the clientele — many of whom might enjoy watching a beautiful (albeit clothed) woman tell dirty jokes while waiting for the next dancer to come out.

But even with that flash-forward glimpse of Midge decked out in beatnik black, cussing up a storm for an adoring West Village audience, it doesn’t feel like either her career or her show are advancing significantly. After so much time away (due to Covid), maybe it’s reassuring for Maisel to go back to basics, especially since it was largely a comfort-food show to begin with. The morning before these episodes premiered, Amazon announced that Maisel had been renewed for a fifth and final season. We can hope that the Palladinos are aiming the story in a particular direction, and that Midge’s backsliding has a bigger purpose. But after a while, watching the show feels like being stuck on the Wonder Wheel with Abe and Rose and Midge, with lots of loud talking that goes in circles without ever getting anywhere.