In the run-up to playing Pamela Anderson in the Hulu miniseries Pam & Tommy, the London-based actor Lily James had to submit an application to the State Department so she could enter the U.S. for filming. And the bureaucrat on whose desk that application landed took one look at it, squinted, and said . . . no. “I got denied,” James groans. “I wanted to live the lifestyle and get a tan and go to Malibu and try and absorb the American feel. Maybe they were thinking, ‘Well, you shouldn’t play Pamela Anderson — look at you.’ ”

Anderson, it’s true, is buxom, pillow-faced, and platinum. James is lean, angular, and brunette, though her naturally dark locks startle fans of her series of onscreen blondes: wildling Lady Rose MacClare in Downton Abbey, restless waitress Debora in Baby Driver, a younger Meryl Streep in Mamma Mia! Here We Go Again, and her breakout starring role in Cinderella in 2015, which she unexpectedly won after auditioning for one of the wicked stepsisters.

But lucky for her, and us, the U.S. government changed its mind. So here James sits sipping a gin and tonic at the Polo Lounge in Beverly Hills, her pale-lavender nails clashing playfully against her black leather jacket, discussing the show that’s launched her career into the stratosphere.

Pam & Tommy tracks the tumultuous first two years of Anderson’s marriage to Mötley Crüe drummer Tommy Lee, from their ecstasy-fueled four-day courtship in Cancún to her public humiliation as their personal sex tape was stolen and then sold online. James delivers a charismatic, funny, and poignant portrait, capturing Anderson just as she was hoping to retire her Baywatch swimsuit for motherhood and mainstream success. In one standout monologue, Anderson aspires to a career like Jane Fonda — “this badass, sex-bomb, anti-war, workout-video-selling actress chick” — which will never come to pass because of a toxic mix of slut-shaming, scandal-mongering, paparazzi madness, and public mockery. 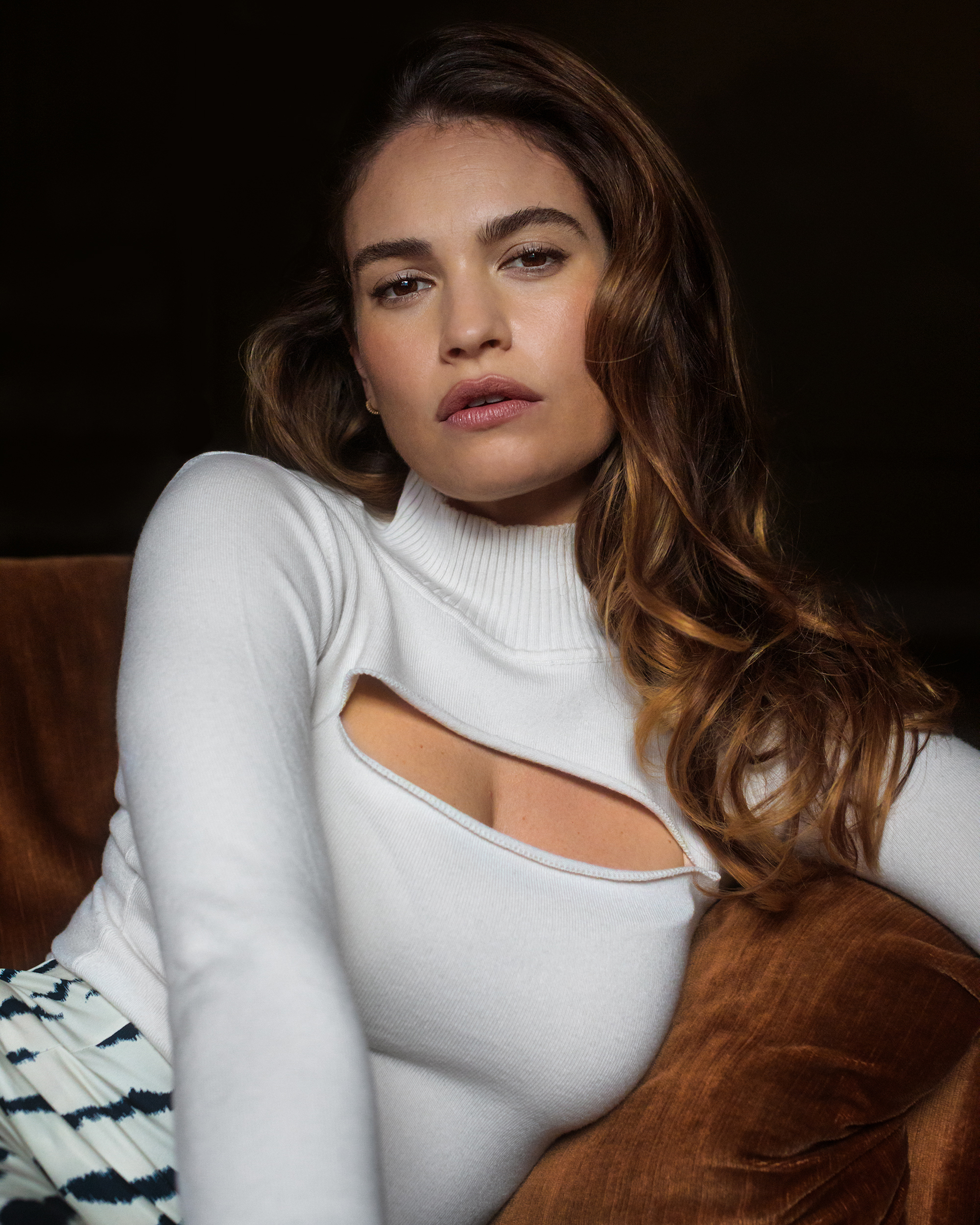 “A lot of people don’t know the true story of what happened,” James, 32, says. “And within that, the bigger themes of privacy and sexism and exploitation into the birth of the internet. It sort of simultaneously collided with this huge change in the world — the point of no return — and impacted the kind of culture we have today.”

Of course, James’ outer Anderson initially got much of the attention. Her physical transformation into the 13-time Playboy cover girl took over three hours of spackle a day: wigs, blue contacts, teeth, facial prosthetics, spray tan, fake tattoos, fake birthmarks, and a set of 34DD breasts that were glued and airbrushed to her chest. (“Just incredible,” James says. “You’d never have known the difference.”) When she’d leave her trailer, people looked at her differently. She felt at once desired and invisible beneath the full get-up. It took her six months to build up Anderson’s muscle tone (“I’m not athletic,” she says) and nearly as long to master her accent, a half-Canadian, half-Cali rasp that was “lower and more mature than I thought it’d be.”

James studied Anderson like she was prepping for an AP exam, mastering her head toss, widened eyes, and swaying torso. But she also focused on Anderson’s intelligence and sense of humor. James watched all of her interviews, devoured all six of her books, even read her poetry: When did I go from a curious little girl, to an insatiable woman? Girl on the run . . . Femme fatale . . . devoted and . . . divided.

“I felt the pressure of trying to do justice to this woman,” James says. “What happened to her was so unprecedented and so wrong.”

James herself is a study in contradictions. The Surrey-born actor reveres larger-than-life characters who live loud and unapologetically, and considers herself a flexible free spirit who races after the romantic. “I’m like water,” James says. “I like to take you on, or I can dribble out on the floor and end up like a puddle.” Yet, her colleagues see a driven, methodical perfectionist — the valedictorian of the backlot — willing to work as hard as it takes to play the kind of fanciful dreamers she claims to be. Her smile is slightly dizzy, as if she just stumbled off a roller coaster. Yet, inside of her, you sense a racehorse who, if not pushed enough, might just grab the whip herself. Asked what time period she’d live in given the chance, James immediately says World War II, as she’d love the mental clarity of focusing on the fight to survive. Then she realizes mid-sentence that it sounds “so sadistic.”

Still, there’s a Californian hippy-dippiness in James’ DNA that was present even before she arrived in Los Angeles. She sleeps with a black topaz in her hand to lower anxiety, started a dream journal during Covid (in a recent nightmare, she was a toddler serial killer), and dabbles in shamanic healing, where, over Zoom, her instructor connected her to the spirit of her grandmother’s dog.

That grandmother was an American actress named Helen Horton, best known today as the voice of Mother in Alien. (She’s the bitch when Ripley spits “You bitch!”) “I idolized her,” James says. “Amazing bone structure.” They share a jaw line, though James doesn’t think hers is as strong. Horton married a Scot and planted the family tree in the U.K., where she took over from Vivien Leigh in the London production of A Streetcar Named Desire. Lily’s father, a good-looking actor and musician, returned to his mother’s roots in L.A. and spent the Seventies getting high on Sunset Boulevard — “He was basically Tommy Lee,” James jokes — until a car accident scarred his face. 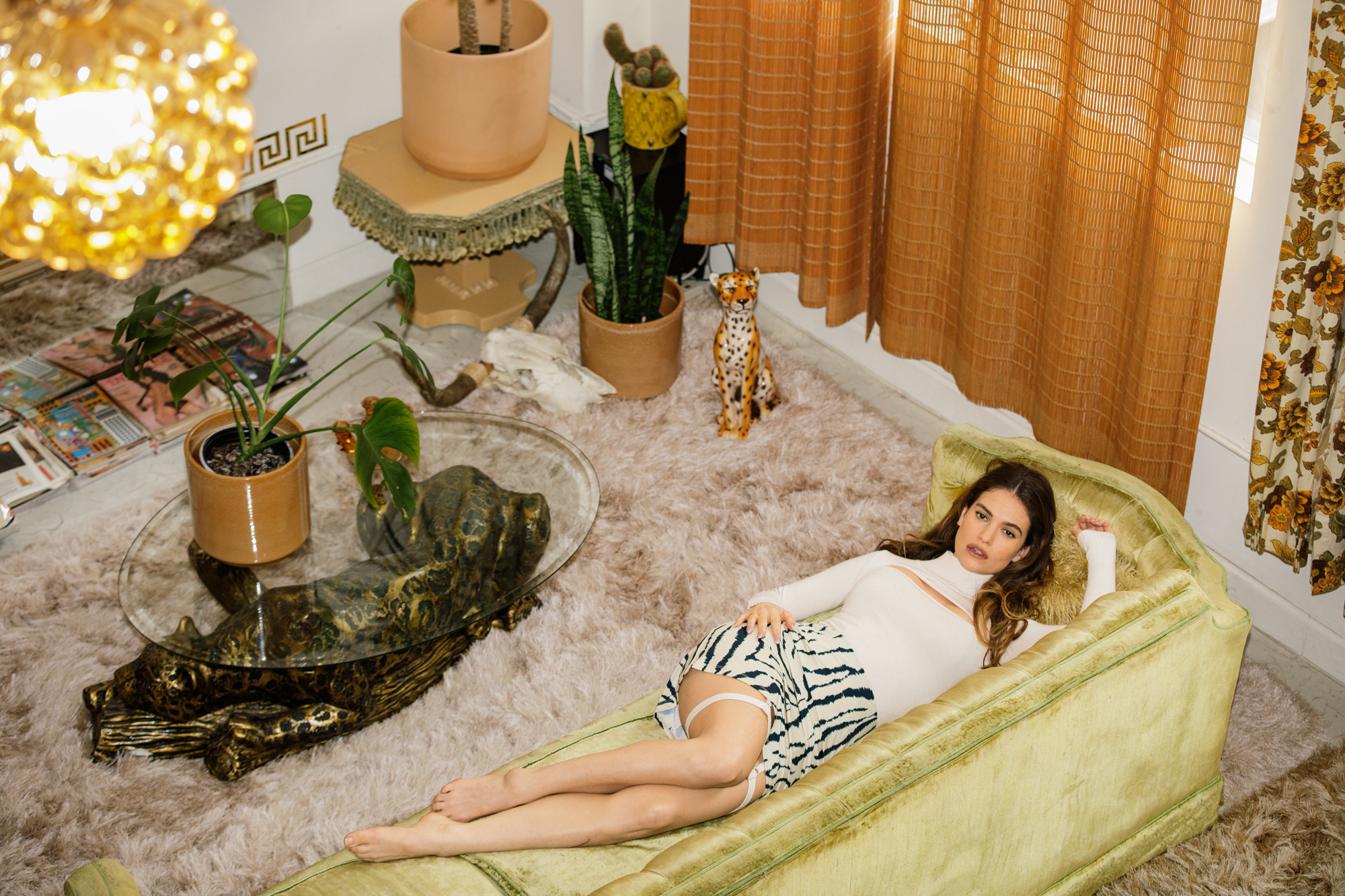 Growing up, James was fascinated by her father’s constant guitar strumming and silly accents and stories of Hollywood, which “felt very mythical.” Yet, she was more obsessed with her mother’s books about castle-shaped academies where precocious girls pranked their teachers. At 11, she persuaded her parents to ship her off to a performing-arts boarding school.

She used to dream she’d become a singer like Janis Joplin or Carole King, a folkie type who, in another life, might have passed a doobie to her dad in Topanga Canyon. At the last minute, she decided to study acting at the Guildhall School of Music and Drama in London because she thought it would be an even harder challenge. Not long after she enrolled, her father died. He lives on in her stage name, which reworks his first name into her last. (Her birth name “Lily Thomson” had already been poached by a circus performer.)

After turning heads in Cinderella, James made a point of trying to shake off the Disney princess. She told the press that on her way to the film’s Berlin Film Festival premiere she had to pull over and pee in a gas station in her pale-pink Christian Dior gown. Following the glamorous press tour, she went backpacking in Southeast Asia, where she slept in huts that cost two pounds a night. Soon enough, though, she took on a series of roles a serious British starlet is supposed to take, primarily period pieces about plucky girls braving the Blitz (Darkest Hour, The Exception) with a dash of high-toned theater (The Seagull, Romeo and Juliet), buttressed by a couple of bustles (Pride and Prejudice and Zombies and War & Peace). Edgar Wright’s Baby Driver allowed James to shimmy into the 21st century, but that was a movie about a guy and a car that stuck her girlfriend character in the back seat.

“You come to understand how people think of you,” James says. “That’s very useful, what that fantasy idea of you is.” She saw two options: Plant roots as the definitive English rose, or start flashing her thorns. “I was ready for a transformational role, something I didn’t really think I could pull off.”

She created one for herself in the lovelorn Linda Radlett, center of last year’s terrific BBC miniseries The Pursuit of Love (based on Nancy Mitford’s bitingly witty 1945 coming-of-age novel), which James also produced. Yet, outside of the worlds she created, James found herself in a similar position to Anderson in 1995: sick of being typecast and eager for her real work to begin. She’d even had a brush with the gossip rags. While she’d carefully kept her five-year relationship with Dr. Who’s Matt Smith low-key until the couple split in 2020, a paparazzi photograph published soon after of her appearing to kiss her married Pursuit co-star Dominic West brought a whole new kind of scrutiny.

“Women in the public eye at some point experience some sort of difficult situation in that relationship between privacy and your life being in the tabloids,” James says. “It was a lot. It’s a story as old as time.”

On that front, James seems to empathize with Anderson’s vow to never watch Pam & Tommy. But what does she hope Anderson might see in her performance if she ever hits play? James can’t answer. She doesn’t want to put words in Anderson’s mouth. What’s clear is that she fell deeply into the role. Her co-star Sebastian Stan, who plays Tommy, only remembered halfway through filming that James was English. “Every time she was speaking to me, she was speaking like Pamela,” he says. “It wasn’t until the end of the shoot that I actually met Lily.” Out of costume at a producer’s birthday party, James even went unrecognized by one of the show’s own directors.

“The more I researched, the more personal it felt,” James explains. “I lost perspective on who I was.

“I felt pretty burnt out after,” she continues. “It was a really tough shoot.” But in this courtyard, her gin and tonic drained and the chilly California night air rustling the palm leaves, she seems recovered enough that she’d gladly do it all again. “What’s the point in doing anything if you get an opportunity like this,” she says, grinning, “other than to run with it?”