“It’s even weirder now than it ever was,” John Waters says, reflecting on his newly restored, resplendently profane Multiple Maniacs. “When I was watching it again recently, I was thinking, ‘No wonder my parents were uptight.’ But I’m proud of it.”

The Pope of Trash’s 1970 feature stars his greatest muse, the raunchy drag queen Divine, as the ringleader of a homicidal sideshow called the Cavalcade of Perversion that sets up camp in — of course — Baltimore. Vulgarity ensues. The poster for the theatrical re-release, restored from film the director had kept in his closet, sports Waters’ original tagline for it: “A Celluloid Atrocity.” It’s also added a new one: “Restored. Reviled. Revolting.” And the movie most definitely lives up to all those promises and more, from Mink Stole giving Divine a “rosary job” in church (yes, that’s a sex act) to a famous scene where a giant lobster sexually assaults our heroine.

“I wanted to make the MPAA watch it,” the filmmaker admits over a lengthy conversation, “because when we re-released Pink Flamingos, we knew it’s NC-17. But they said, ‘We can’t just give you the rating; we have to watch it,’ which must have been hilarious. I really wanted to make them watch Multiple Maniacs as punishment.”

What were sideshows like for you, growing up?
I went to one Timonium Fair [in Maryland] and they had a whole sideshow. They had a lobster boy and people that had bad things that happened to them — but they had a separate tent that had the fat lady. That was obviously a big influence on me. She was just sitting there in a polka-dot dress on a folding chair with bees — it’s always bees at state fairs — and she was eating a pizza. Most of the people who came in were uptight, like, “Oh God, let me out of here.” I just stayed and stared. I thought, “Look at her. This is a show business job.” Maybe that’s why I worked with Divine and Edith Massey and Ricki Lake — the big girls in my movies.

John Waters Looks Back: 'I Was Worse Than Ed Wood'

The Cavalcade of Perversion took place on your parents’ lawn. Did they take a tour?
No, but my mother met Divine there when we were shooting the scene where she’s in a bloody bathing suit and was smashing the car’s windshield. That was my driveway. Divine was so nervous to meet my mother that he took the wig off. Then he was a man in a woman’s bathing suit covered with blood, which made it worse. My mother tried to be proper. She served us tea. 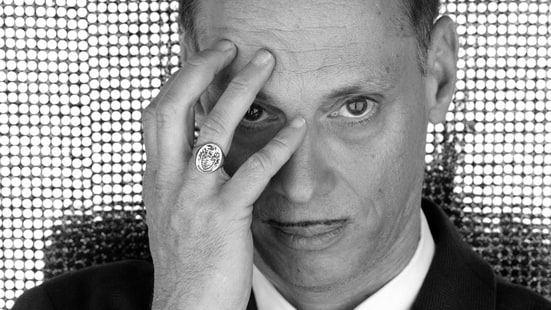 What did she say about Divine later?
Nothing. My parents really tried. They never even saw Multiple Maniacs and thank God they didn’t because no parent would have been happy that their child made that. Especially at that time.

Let’s talk about the lobster rape scene. Isn’t Maryland known more for crab?
I picked a lobster because in Provincetown [Massachusetts], where I am right now, they had a postcard of a giant boiled lobster. It was on T-shirts, too. We took drugs there a lot so we would fantasize that the lobster was in the sky. And lobsters have a big history in surrealism; Salvador Dalí did the lobster dress and the lobster phone.

Who made the lobster?
It was also the first thing [production designer] Vincent Peranio ever made for me. He did all my movies and went on to work on The Wire. We eventually buried it because I’d had it for along time and it started to fall apart. We took it down to this part of the harbor that’s now very fancy — back then it was just rats and sailors and it was the worst place — so we put it in the bay. We gave it a burial at sea in the harbor or Baltimore.

You filmed part of Multiple Maniacs in your apartment, which you had decorated with a silver Jackie by Warhol.
That’s a real one. I still have that. I got it in 1964.

What did he think of your movies?
He had a screening of Pink Flamingos. He recommended it to Fellini. He put Divine on the cover [of Andy Warhol’s Interview magazine]. He was very supportive. Also, at the exact same time I was making Mondo Trasho, he was making Trash, and we didn’t know it. Later I found out he depicted the Kennedy assassination at the same time I was doing Eat Your Makeup where Divine was Jackie. It’s weird that some of the same things were going on at the same time. I didn’t meet him until after Pink Flamingos, but I certainly saw all the movies and they were certainly an influence.

“Divine was so nervous to meet my mother that he took the wig off. Then he was a man in a woman’s bathing suit covered with blood, which made it worse.”

This was your first movie with Edith Massey. What was your first impression of her when you met her?
What you see in the movie is actually where she worked. She was a barmaid. Vincent Peranio and [actress] Sue Lowe lived down there in Fells Point before it turned into what it is today; it was the cheapest, poorest neighborhood then. So they went to this wino bar and called me to say, “You gotta meet this bartender.” I went in there and gave her the part and audiences liked her, so I gave her a bigger part in Pink Flamingos. But that was her bar. You can see behind her, the calendar says November 1970.

That was an interesting time because the Manson murders were still a big talking point, and you figured that into the movie.
When we started the movie, they had not yet caught him. Nobody knew who he was. So part of the plot was that Divine was blackmailing her husband, making him think he killed Sharon Tate — and the night right before we finished, they caught Manson. So I had to put that in because I knew it didn’t make sense. Even then, nobody knew who those people were. We didn’t know that story was going to turn into what it became. So we filmed it with him seeing the Manson headline on the newspaper.

It’s also interesting that you didn’t know who Charles Manson was yet you had Divine leading something akin to the Manson family in it.
In 1969, people actually believe there was a revolution happening. We made this movie to scare hippies, hopefully in a humorous way.

It was also an extension of the family of actors you worked with regularly: Divine, Mink Stole, Edith Massey and so on.
It’s great to make movies with your friends. I think my audiences have liked getting old with my characters. Mink was just up here in Provincetown. We met her 50 years ago. And I’m still friends with Mary Vivian Pearce; she lives in Nicaragua. I’m in touch with every person that’s alive with the exception of the puke eater. Maybe this will bring him back.

What was the puke?
Cream corn. I tell all young filmmakers it works very well as puke.

Let’s talk about Susan Lowe, billed as “cavalcade pervert,” whom you once praised for farting while modeling. What was she like back then?
She’s certainly bohemian and an artist. I still see her all the time. She was Mole in Desperate Living, but she’s not a lesbian. The baby Divine gives birth to in Female Trouble is hers, when it was about five days old. Sue is a grandmother now and owns a house. But in the movie she’s really rude. She keeps saying, “I was fat then.” Usually you’re so much skinnier when you’re young; she was the only person who was fatter when she was young.

Multiple Maniacs is notable as being the first time you made Divine eat something disgusting, before eating shit in Pink Flamingos. How did you manage that?
He ate an old cow’s heart that had been sitting in my fridge for two days in Multiple Maniacs. It was trainer wheels.

Did he ever say no to your ideas?
I would never ask him to do something I thought would be really bad for him.

Like eating dog shit?
[Pauses]. No. And that was a political act against the tyranny of [Lawrence of Arabia director] David Lean. [Laughs].

It’s good then that he was on board.
People did say no. In Pink Flamingos, I wanted Mink to set her hair on fire. She said, “Well, how are you going to do it?” And I said, “Light it, and then put a bucket of water on you.” I was stoned. I didn’t mean it unsafely.

Then there was another thing when Cookie Mueller was supposed to smash in a TV when it was on, but then she asked around and found out it was not a good idea because it could explode. They said no and I didn’t push it. I didn’t want anybody to get hurt or anything.

It’s been 12 years since your last movie, A Dirty Shame. What will it take for you to make another?
Somebody to say yes. My last movie was not a big hit and my last two books were bestsellers, so I signed a two-book book deal. You stick to where they like you.

“In Pink Flamingos, I wanted Mink [Stole] to set her hair on fire. ‘Well, how are you going to do it?’ ‘Light it, and then put a bucket of water on you.’ I was stoned.”

What’s left that can be shocking in cinema?
I did an art piece called Kiddie Flamingos, where I rewrote Pink Flamingos as a children’s movie and shot it with kids at a table. That was in my last show, but I don’t think that was a film.

Why did you want to restore Multiple Maniacs? It seems antithetical to the movie’s grittiness.
Oh, I disagree. I never wanted it to look as bad as it did. I didn’t know how to do it better. I figured if I’m going to re-release it, let’s make it new. You can hear everything and see everything.

I read that you’d kept the print of the film in a closet for 20 years and then in a 100-plus-degree attic. Did you just not care about it?
No, I didn’t care. That was the best place to put it. Let me tell you something: Those Kodak reversal films last. Paul Morrissey told me the same thing; he shot a lot of Warhol movies on that too. My films didn’t fade. Cleopatra did.