“Can you hear me now?” Dropped calls may be a thing of the past (well, most of the time) but there’s a new dead zone in town and it’s running (choppy) circles around your WiFi.

While routers will get you online, their signal strength will only go so far, especially if you live in a house or work in a large office. The larger the space, the harder it is to pick up a signal or stay connected. Getting a strong WiFi signal also depends on the layout of your space and the number of devices you’re connecting to the Internet. It’s a little like driving — too many road blocks and other drivers will only slow you down. To really boost your speed and connectivity, you’ll want to invest in a WiFi range extender.

Also known as a WiFi booster or repeater, think of a range extender as the “Waze” of home networking apps, helping you find a faster way to get online rather than relying on the same old pathways. A WiFi extender captures the wireless signal from your router and replicates it in rooms where the signal is weak or nonexistent. It essentially lengthens (or expands) the range of your signal. The strongest WiFi boosters will be able to get a signal even into corners of the room where you previously had a dead zone. And because a range extender operates on a different wireless channel than the one used by your router, it’s able to not only rebroadcast the signal, but elevate it as well.

These Weighted Blankets Could Help You Sleep Better at Night

From Your Car to Home Office, Instantly Make Any Seat More Ergonomic With This $40 Hack

The best WiFi extenders run on two bands — 2.4GHz and 5GHz — constantly working between the dual bands to provide optimal connectivity. Generally speaking, the 2.4GHz band is great for basic Internet surfing (think: checking emails, reading the news, etc.) and the 5GHz band is best for streaming content and online gaming. The 2.4GHz is a longer-range band but transmits data at slightly slower speeds; the 5GHz band will have less coverage but provides faster speeds. Most popular WiFi extenders will also have an available Gigabit Ethernet port that lets you plug in any wired device, like a gaming console or computer to get the same boosted speed and performance.

Aside from expanding WiFi coverage of an existing signal, you can also use some range extenders to create a new or private WiFi network. Set limits on which devices can access the network, to ensure that it’s always fast and not bogged down by users. New WiFi extenders can also turn a wired network into a wireless one, freeing you up from confusing cables and connectivity issues.

When buying a WiFi range extender, it’s important to note that where you place the unit could affect your coverage. The ideal location to place the extender is half-way between your router and the room where you want to extend the signal to. Or, take your phone or laptop around the room and find out where your Internet connection tends to drop out. Once you find the drop zone (or dead zone), you’ll find a solid place to put your WiFi extender too.

Before you call your cable company the next time your Internet is slow, consider picking up a WiFi range extender. Sometimes it’s not your signal that’s bad, but rather your signal strength. We’ve rounded up some of the best range extenders online, to help you get online — and stay online — without any lags, drops or interruptions.

One of the most popular WiFi extenders in the market, the TP-Link WiFi Range Extender wins points for its powerful antennas, compatibility and ease of use.

This set gets you the main hub with three adjustable external antennas. Extend the range of your WiFi with the dual band RE450, which is compatible with almost any router or access point and boosts both 2.4GHz and 5 GHz networks with ease.

TP-Link says the range extender gets you WiFi speeds up to 1750Mbps. Users praise the reliable and consistent connection, especially great if you’re streaming movies or gaming online. A Gigabit Ethernet port lets you connect wired devices to your network for high speed Internet.

The Intelligent Signal Indicator light helps you quickly find the optimal location to place the RE450.

What we like: download the TP-Link Tether app to monitor your WiFi speed and status from your phone. You can also use the app to set up guest privileges and manage which devices can access the WiFi.

PROS: Super simple to set up right out of the box.

CONS: Some say the LED lights are quite bright in the dark and could be distracting.

We love this dual-band range extender for its compact size, reliable coverage and worry-free connectivity.

Four high-gain antennas help you reach more areas of the room, eliminating dead spots and creating more reliable, uninterrupted WiFi. The extender works with most standard routers and gets a combined speed of up to 1200Mbps (900Mbps on its 5GHz channel and 300Mbps on its 2.4GHz channel). Use the extender to expand WiFi coverage of an existing network, or use it as a wireless access point, to convert a wired network to a wireless one. You can also use the device to create a private WiFi network.

An LED indicator helps you find the best placement for the best connection. An Ethernet port lets you connect wired devices.

The company says the unit’s “isolated heat dissipation design” prevents the device from overheating. The design also seals out any dust or debris that could interfere with operation.

The set includes the range extender/repeater, an Ethernet cable and a user manual.

CONS: Some users say setting up the unit took a little while.

If you’ve got a small apartment, office or studio, this NETGEAR WiFi Range Extender is the perfect device to boost your connectivity. Measuring just 7 x 5.6 inches (approximately the size of two decks of cards next to each other), this unit lets you connect up to 15 devices and extends your WiFi coverage up to 1000 feet.

It delivers speeds up to 750Mbps on a dual band frequencies. An included Ethernet port lets you plug in gaming consoles and other wired devices.

Simply plug in the range extender into any normal outlet, press the WPS button to connect to your router, and you’re good to go. Use the NETGEAR WiFi Analyzer app to determine optimal placement location.

CONS: Best for small spaces. If you’ve got a larger home, you’ll want to pick up something with more range. 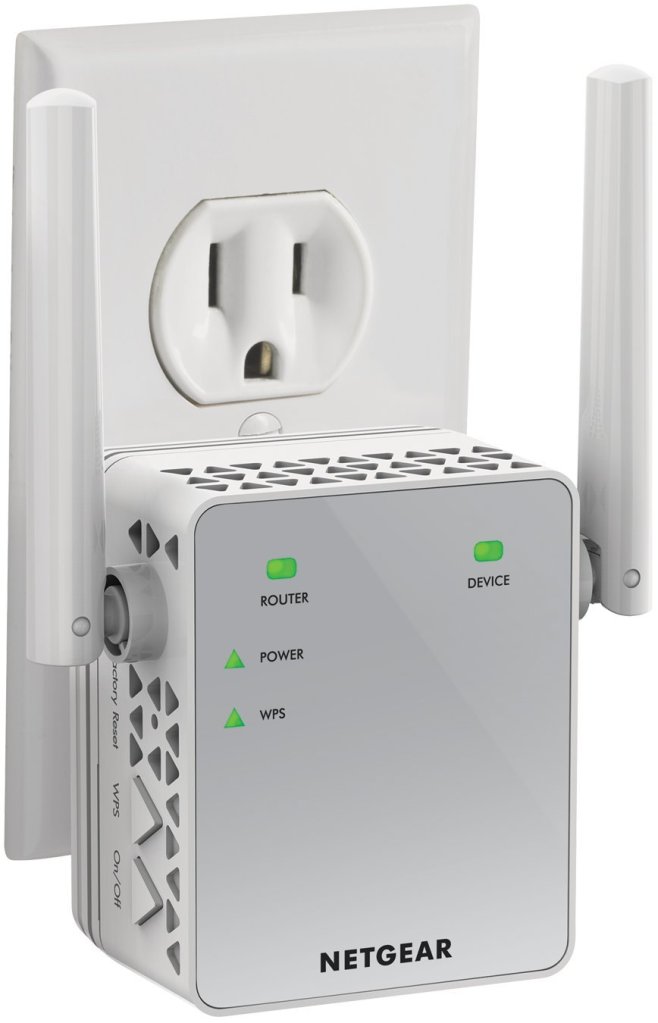