It’s not exactly a phone or even really a traditional tablet, but a smart-display is an extra-screen to have on hand, and one that can certainly come in handy around the house. It’s a voice-assistant enabled additional option for productivity, help to control devices in your home, connect you with friends and family, and provide an easy way to stream music and entertainment.

The kitchen is one area where a smart-display can really show off the convenience it offers. Thanks to its constant WiFi connection and voice-command readiness, these units act as a great hands-free sous-chef when finding recipes, even featuring the ability to read them to you out loud as you’re cooking, without needing to expose your phone or laptop to messy ingredients. It also makes multitasking that much easier, acting as a permanent communication station for talking with friends and family while cooking. With the Amazon Echo, you can even be cooking and ordering more groceries in real-time, as soon as you realize you’ve run out of ingredients.

The latest smart displays all come with cameras that make them great for video chatting. Some smart display cameras can even stay tracked on you as you run around the room, always keeping you in frame and in focus, so the person on the other end never loses sight or sound. The best smart displays are also ideal as a streaming device too, playing music, movies, podcasts or news, or keeping the kids entertained while you cook.

But these all-in-one units go way beyond the kitchen. If you’ve already got the inner-workings of a smart home, or are looking to get one started, a smart display can be a command center wherever it’s set up, giving you full access to adjusting things like lighting, locks, and security cameras. More and more smart-home capabilities are becoming available as time and tech move forward, and getting a designated display is a great way to always have a central control panel at the ready to customize and control your futuristic living space.

Amazon has released a number of smart products over the last few years, varying in size and capabilities. But the fourth-generation Echo (dubbed the Echo Show 8 due to its eight-inch screen size) is everything you’ll need. The device features the power of Alexa’s voice-assisting capabilities, with a nicely-sized eight-inch display for streaming and video chatting, all in a crisp 1280p resolution. Two two-inch speakers on the back provide solidly balanced audio for warm and rounded sound as well.

Since it’s an Amazon product, you get all the integration with their other apps, such as Prime Video and Amazon Music, as well as calling other Echo users whether they have a video display or not.

Some common privacy concerns are taken care of too. No more putting a piece of tape over the camera when not in use, as the Echo Show 8 has a simple but really practical slider to cover the lens. There’s also a mute button up top for those times you don’t want Alexa listening in on your conversations.

Setup is incredibly easy, and this hooks up to your smart-home flawlessly, acting as a control panel for your lights, doorbell, music and whatever else you’ve got connected. 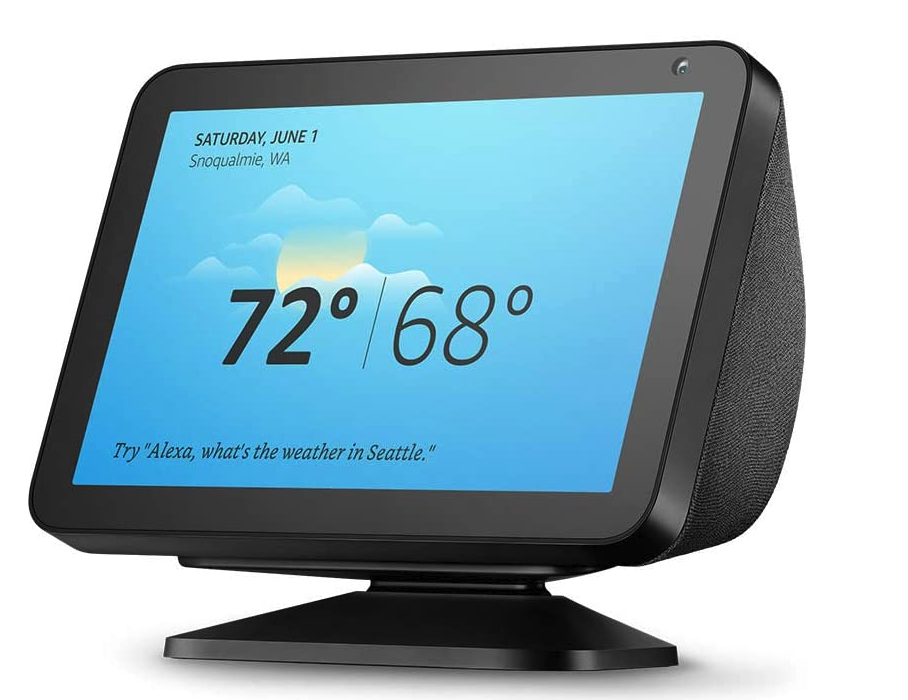 The Facebook Portal utilizes Facebook’s Messenger and WhatsApp to connect you to your friends and family around the world.

The camera follows you as you move around, even knowing when to zoom out when you step back. Its “SmartSound” feature has a similar effect, focusing in on whoever’s talking, and muting background noise to a minimum. Outgoing sound is surprisingly strong too, with a little built-in subwoofer installed on the backside.

One feature that sets this frame apart from the rest is Story Time, which lets you read along to children’s books and bring the stories to life through music, animations, and augmented reality effects.

Alexa is also built-in here too, and the unit is compatible with a ton of apps for streaming, or just displaying photos when not in use. The crisp ten-inch screen is the largest on our list. 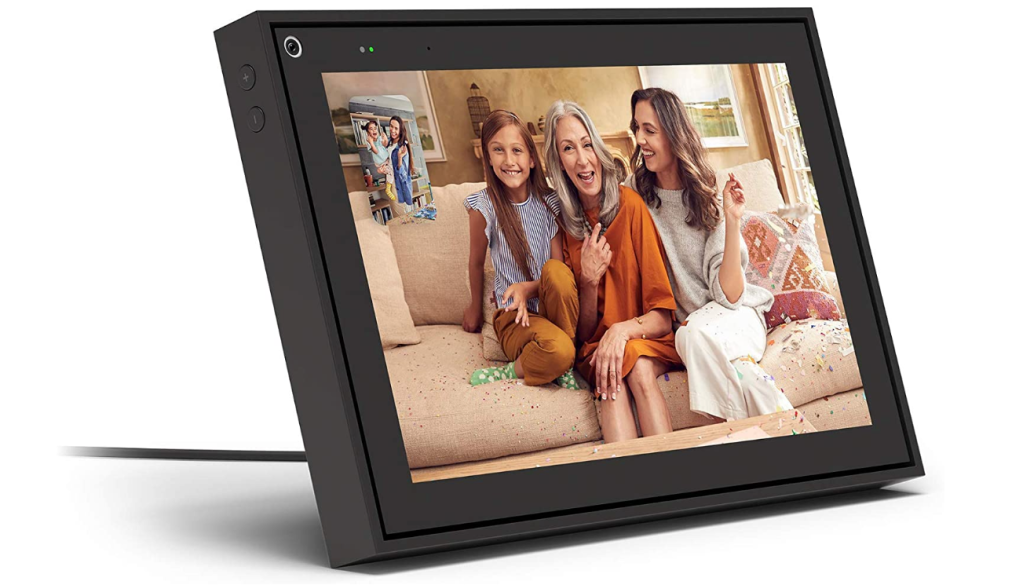 With a nearly 10-inch, 2048 x 1536 touchscreen and 4:3 ratio, Frameo’s display is vivid and bright, bringing out more colorful details in every photo and video.

Storage is plentiful here, with 16GB available, plus a slot for an SD card and USB drive too. This also supports 5G WiFi, as opposed to most other units that only work with 2.4Ghz WiFi, meaning you’ll see significantly increased speeds when sending and receiving photos and videos.

Another great perk of this display is the ability to give others the option to upload their own photos (and comment on yours) from across the globe through the Frameo app, just by sharing the unique code on the frame. 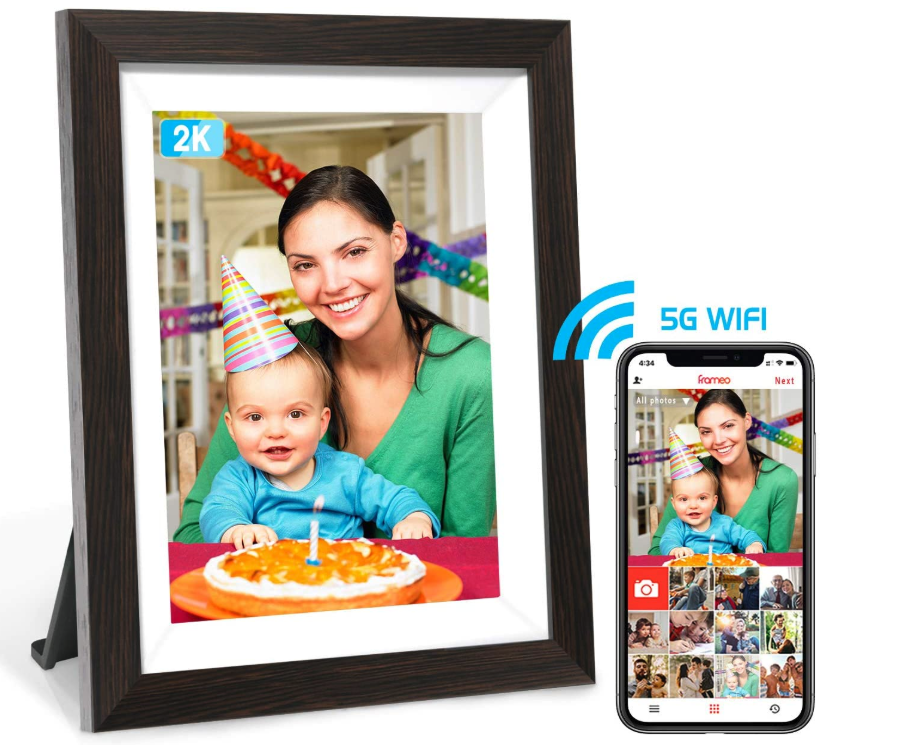 Another Amazon Echo option, this time a little more compact, we love the Echo Show 5 for its usability and practical features. The overall design is similar to the larger smart displays on our list, but the Echo Show 5 has a 5.5-inch touchscreen compared to the Echo Show 8’s eight-inch screen

Adjusting the settings can mostly be done right from the device itself, which is a nice feature compared with other brands that force you to rely on a downloaded smartphone app. Controlling the other smart home devices in your house can also be done right from the pull-down menu, even connecting with Ring and communicating with whoever’s at your door.

Even though the screen might be a bit smaller, the sound quality is still pretty great, and the microphones pick up your voice clearly without misinterpreting words and commands. 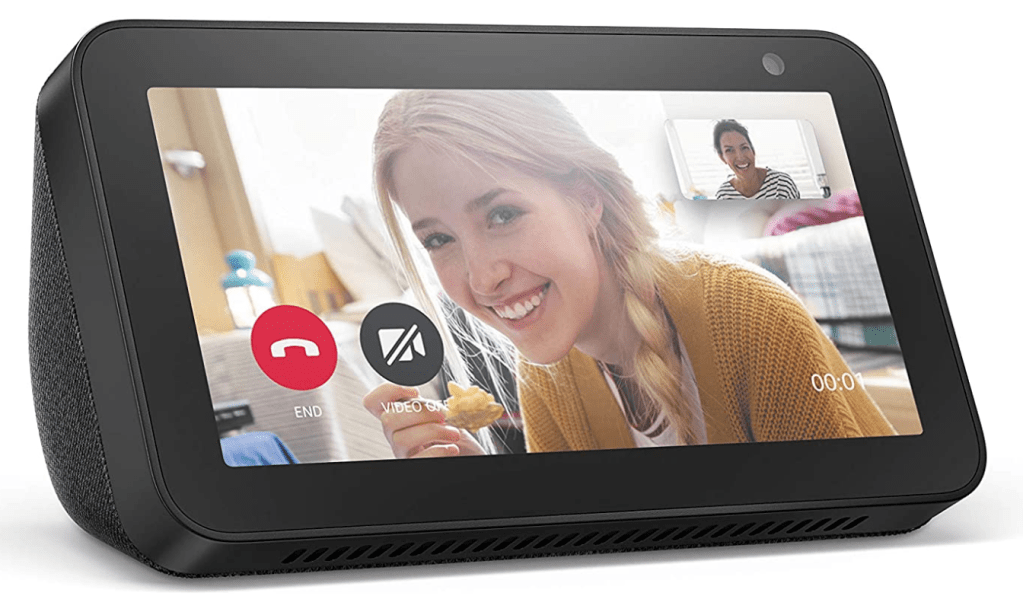