One of the most anticipated UFC matchups of the year takes place tonight, as Stipe Miocic faces off against Francis Ngannou at UFC 260, streaming live on ESPN+.

Three years after their first meeting ended in an unanimous decision for Miocic, cementing him as one of the most dominant fighters in the world, the two meet again for Miocic vs. Ngannou 2: the rematch.

You can watch the prelims starting at 8pm EST, and early prelims are on at 7:30pm EST.

How to Stream UFC 260 Live Online

UFC 260’s main event pits Miocic vs. Ngannou in a heavyweight championship title bout. The only way to watch the fight is to stream UFC 260 on ESPN+ through your TV, tablet or phone.

This is an official pay-per-view event, so to get the Miocic vs. Ngannou fight, you’ll need to sign up for an ESPN+ subscription here, and then pay a $69.99 PPV price. The total cost will be $75. Your ESPN+ subscription continues for 30 days afterwards, and includes free streaming of UFC Fight Night, live sports and access to the entire ESPN+ library of on-demand content.

Your best bet though is to get the UFC + Disney Bundle deal, which gets you instant access to the fight plus ESPN+, Disney+ and Hulu for just $84 here. Once the fight ends, you’ll still have unlimited access to all three streaming services for the rest of the month. You can continue with your Disney Bundle plan for just $13.99 a month moving forward.

There isn’t a way to stream UFC 260 online free, though current ESPN+ subscribers can watch the UFC 260 prelims for free. You’ll still have to sign-up for the pay-per-view fight here if you want to watch the main card. See full UFC 260 pricing and streaming details on plus.epsn.com. 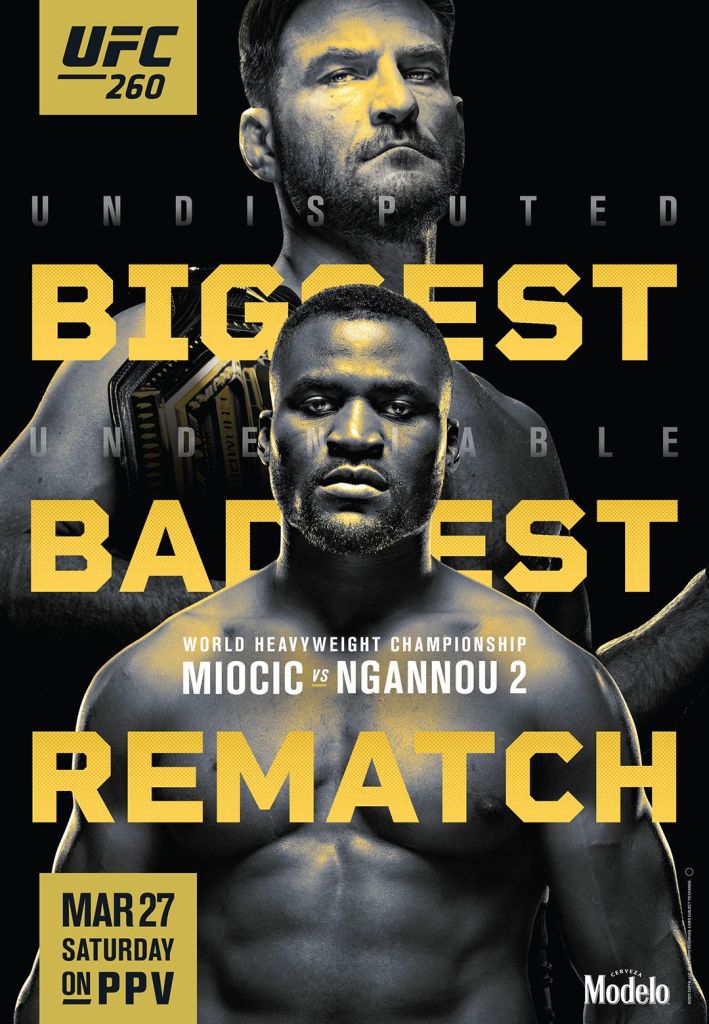 Tonight’s UFC 260 main card pits the current UFC heavyweight champion Miocic against the number one contender Ngannou, in a widely-anticipated rematch. Their first meeting, at UFC 220, ended in an overwhelmingly unanimous decision for “Stone Cold” Miocic, but Ngannou (a.k.a. “The Predator”) is coming off a hot streak, with four consecutive first-round knockouts over his last four fights. Even more impressive: Ngannou laid out all four opponents in a combined two minutes and 42 seconds.

Many analysts chalked up Miocic’s dominant victory three years ago to his ability to switch up his fighting styles on the go, which kept Ngannou on the ropes in later rounds. But the Cameroonian mixed martial artist has improved his versatility since then, and his sheer power can’t be denied. In fact, most oddsmakers have Ngannou as the UFC 260 favorite, holding a slight edge over Miocic.

Aside from Miocic vs. Ngannou, the UFC 260 fight card was originally scheduled to include a UFC Featherweight Championship bout between current champ Alexander Volkanovski and former title challenger Brian Ortega. But the fight was cancelled after Volkanovski tested positive for Covid-19 earlier this month.

In the women’s event, Gillian Robertson squares off against the highly-regarded prospect Miranda Maverick in a flyweight bout. The fight was originally scheduled to take place at UFC 258 before illness took the fighters off the card.

The final matchup in the UFC 260 main card is a lightweight fight, that pits Khama Worthy vs. Jamie Mullarkey in a battle of storied MMA vets.

Where to Buy UFC 260 Merch Online

If you want to rep your favorite fighter, the official UFC store has a huge sale right now on a selection of T-shirts, hats, beanies, memorabilia and more, including official UFC 260 merch featuring Miocic vs. Ngannou. Whether you’re a collector or fan, it’s a great way to commemorate what’s sure to be a memorable night of action in the octagon. See all the available UFC 260 merch online here.