This article is a part of RS Recommends, an editorial series reviewing products in music and entertainment. Items are independently selected; Penske Media may earn a commission from purchases made from our links

It’s hard to believe it’s been 30 years since Seinfeld debuted on our television screens, ushering a new era of comedy for its parent network, NBC, and a new wave of television fans, whose die-hard fervor and enthusiasm would help the show become of the most popular productions of all time.

The first episode of Seinfeld aired on July 5th, 1989 under the show name, The Seinfeld Chronicles. Without a lot of buzz or a marquee star, the show, about a group of friends living in New York, failed to find a following in its early seasons, though it was beloved by television critics, many of whom felt the show’s subversive humor and seemingly non sequitur storylines marked a welcome contrast to the slapstick sitcoms airing at that time. After a test run of only five episodes — one of the shortest first season orders of any show in history — Seinfeld was eventually renewed and given a prime Thursday night slot, a spot it would occupy — and help anchor — for the rest of its nine season run.

How a 'Seinfeld' Joke Became a Reality

The End of 'Seinfeld'

Jerry, Elaine, George, and Kramer would eventually become household names, vaulting their characters — and the actors playing them — into four of the most popular people on network television. As one of NBC’s marquee shows, Seinfeld was consistently the most-watched programs of the week, and twice finished the broadcast year as the number one rated program on TV (not including sports or live events). Long before the Internet and the rise of meme culture, Seinfeld produced memorable one-liners and catchphrases that would be repeated at the office, at parties and yes, at the soup counter, all the while turning everyday eccentricities into must-see TV.

When the show ended its run in 1998, almost 80 million people tuned in to watch the series finale. These days, a whole new generation of viewers catch Seinfeld in syndication, with the half-hour comedy airing on local affiliates of Fox and TBS. Millions more stream the show on Hulu, which bought the streaming rights to Seinfeld for a reported $180 million in 2015 (get a free trial to Hulu here).

To mark the 30th anniversary of “the show about nothing,” we’ve rounded up seven ways to celebrate what our critics have named one of the “Greatest TV Shows of All Time.” Here’s to three decades of laughs and — as Kramer would say — here’s to feeling good all the time.

One of the most popular recurring characters on the show was not one person, but rather an entire team: the New York Mets — a favorite team of both Jerry Seinfeld and his character on the show. This week, the Mets will celebrate Seinfeld’s 30th anniversary with a special “Seinfeld Night” at Citi Field, where the Mets will host the Philadelphia Phillies. Jerry Seinfeld, will throw out the first pitch, and the Mets will give out a special Jerry Seinfeld bobblehead and Jerry-branded baseball cards at the game. Former Mets first baseman, Keith Hernandez, who famously played a heightened version of himself on the show as Elaine’s boyfriend, will appear as well. Purchase tickets on VividSeats.com.

2. Pick Up a Box of Junior Mints

These button-sized chocolates got a huge shout-out in a season four episode, appropriately titled, “The Junior Mint.” The episode follows Jerry and Kramer struggling to confess the truth, after they accidentally drop a Junior Mint into a patient’s surgical cavity, while observing an operation.

As seen on a check-out shelf: The Junior Mints episode of Seinfeld gets its marketing moment, 26 years later, on @JuniorMints boxes pic.twitter.com/rvcm5e9O3t

Junior Mints teamed up with Sony Pictures Television (the distributors of Seinfeld) on a limited-edition box of chocolates, which features Seinfeld iconography and comes with a special download code to watch “The Junior Mint” episode of the show. Purchase: Junior Mints (24-pack), $28.49 on Amazon.com. 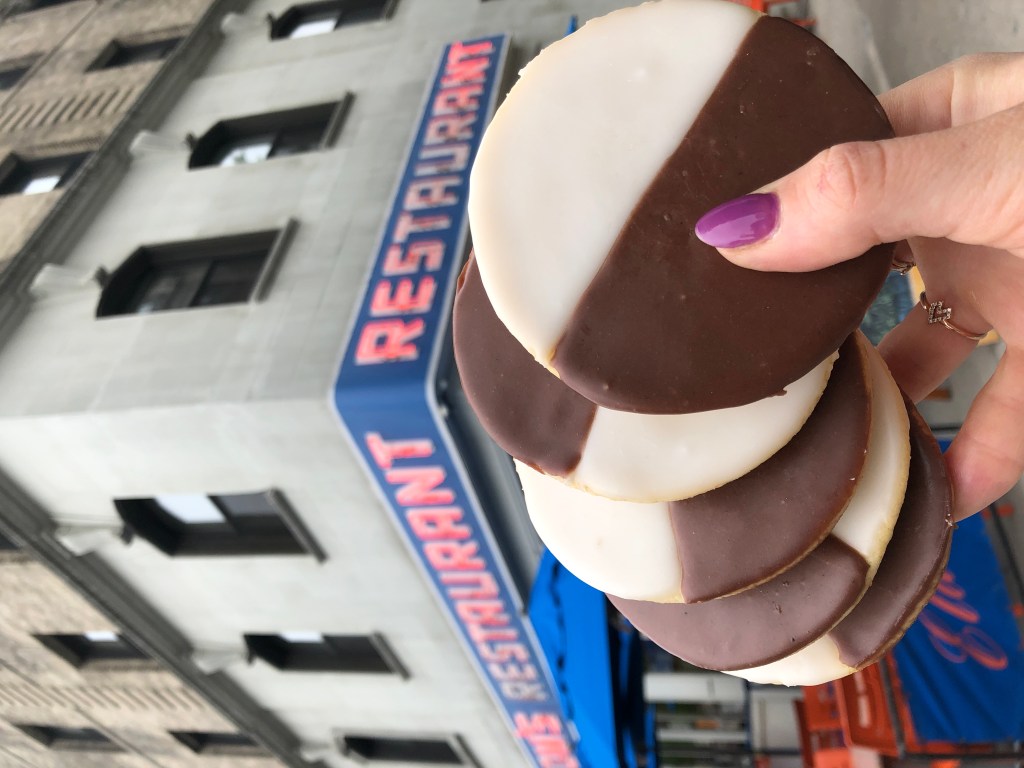 Aside from a slice of pizza or maybe a red apple, no food item is as synonymous with New York than the black and white cookie. And while the origins of the frosted sugar cookie are unclear, Seinfeld helped to popularize the deli and bakery fave in a season five episode called “The Dinner Party.” While waiting in line at a bakery, Jerry picks up a black and white cookie and immediately sees it as a solution to all of his problems — and the world’s problems as well.

To celebrate the 30th anniversary of Seinfeld, New York’s Magnolia Bakery is launching an all-new black and white cookie in honor of the famous “look to the cookie” scene. These are only available in store in limited quantities and retail for $3.50 each. Don’t live near Magnolia? Pick up a pack of individually wrapped black and white cookies online. Purchase: Beigel Bakery Black and White Cookies (18-pack), $30.99 on Amazon.com.

4. Pick Up a Commemorative Action Figure 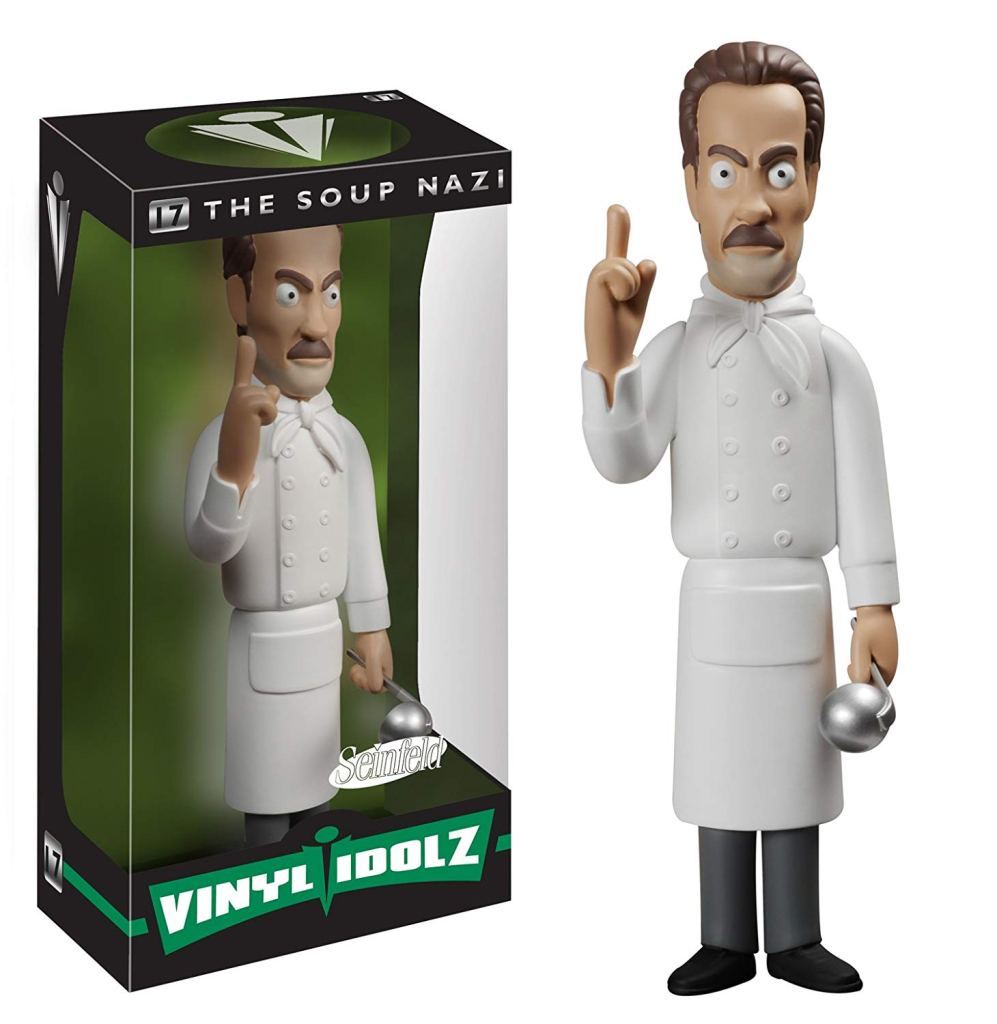 In one of the most beloved (and oft-quoted) episodes of all time, the ”Soup Nazi” put the now ubiquitous catchphrase “no soup for you!” on the map. While the abrasive chef won’t be denying you your serving of lobster bisque, you’ll get a hilarious reminder of one of the show’s best episodes after you walk by this action figure, which stands at 8″ tall and comes in a collectible display box. Purchase: $36.93 on Amazon.com. 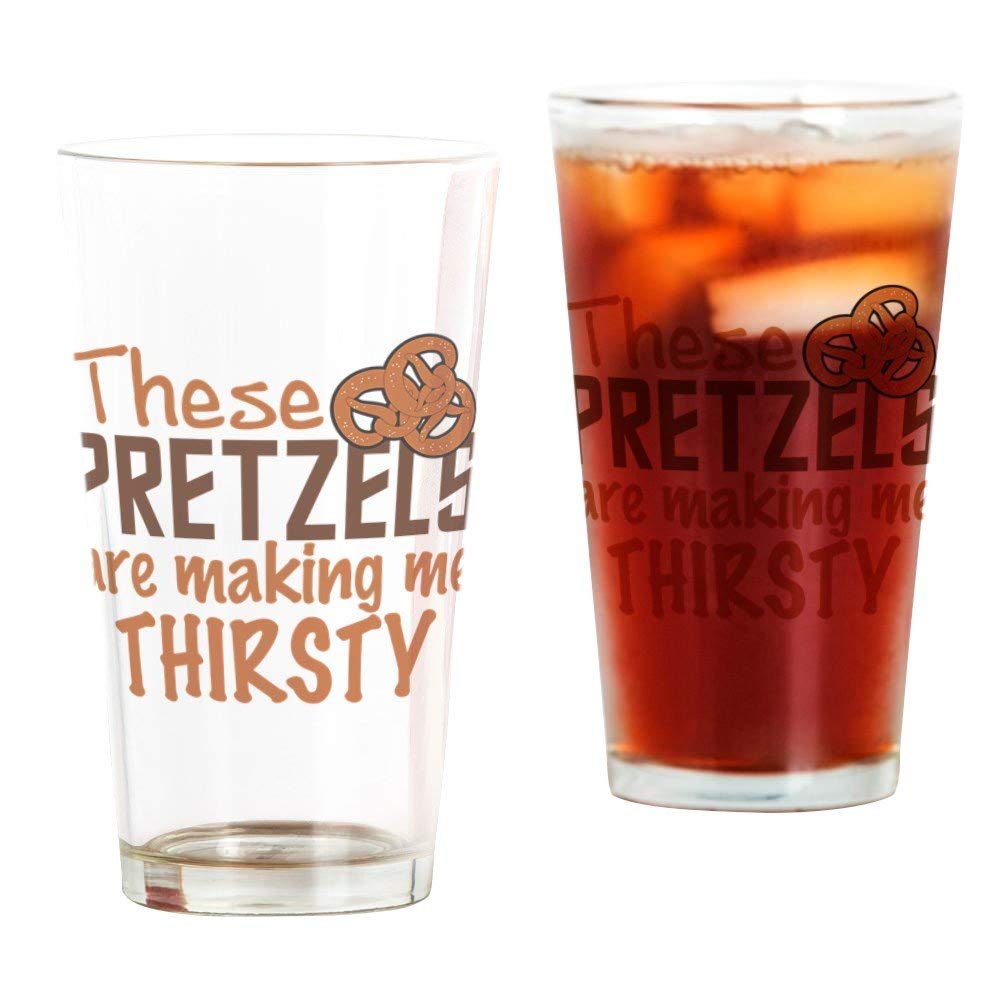 These pint glasses are printed with Kramer’s infamous one-liner from the Season 3 episode, “The Alternate Side.” After landing a role in a Woody Allen film, he’s dismayed to discover he only has one line: “Boy, these pretzels are making me thirsty.”

The catchphrase later inspired fans of the show to start a tradition of throwing pretzels at Jerry Seinfeld during his stand-up performances. While we’re pretty sure the pretzel-tossing has simmered down, Kramer’s famous line lives on as one of the most memorable quotes from the series. Purchase: $6.97 on Amazon.com. 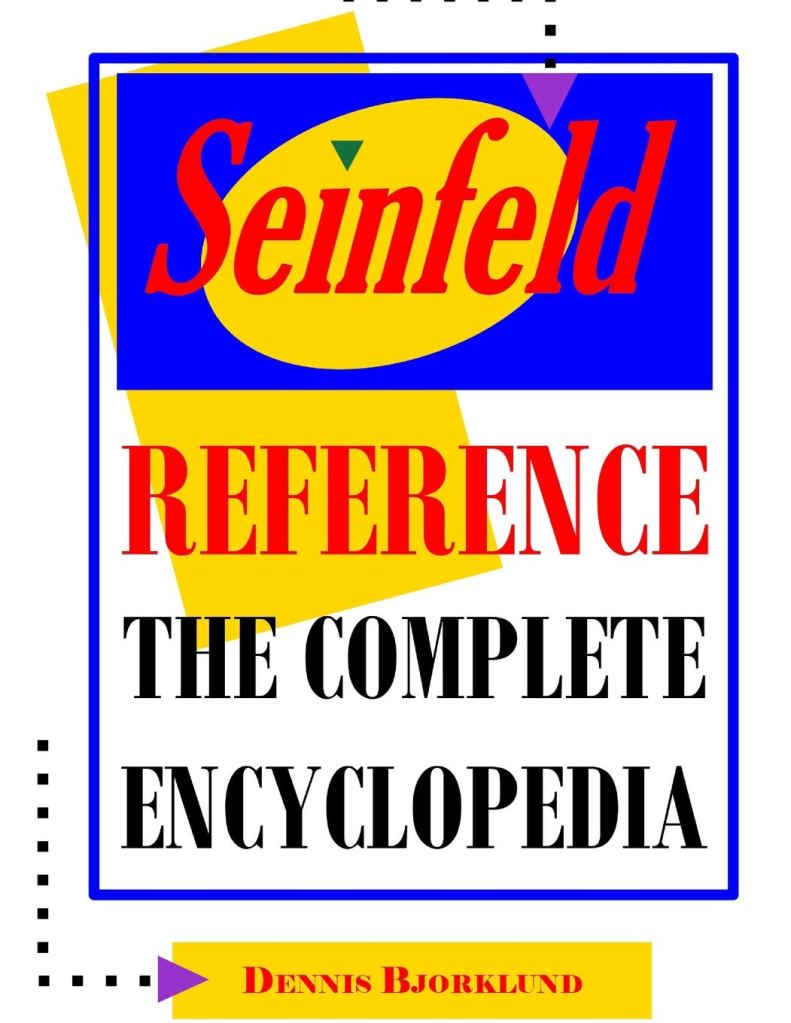 One of the most comprehensive guides to the show, “Seinfeld Reference” features an episode guide for all 180 episodes, behind-the-scenes scoop, and biographies of the show’s creators and stars, along with “biographies” of the characters on the show.

Great for trivia night, or as a gift for a Seinfeld fan, the book also includes photos, technical credits and details on how Larry David and Jerry Seinfeld came up with the premise for one of the most acclaimed shows of all time. Purchase: $17.95 on Amazon.com.

7. Watch The Show From The Beginning 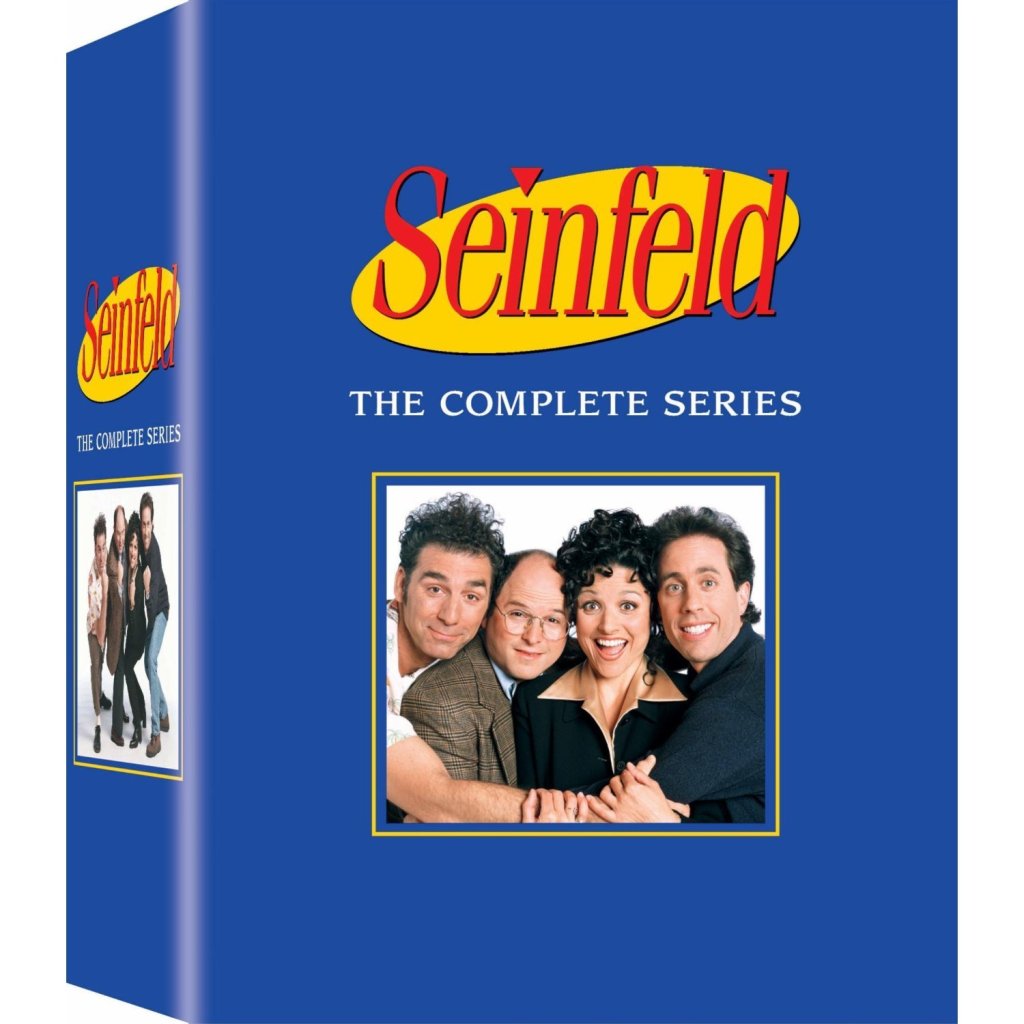 All nine seasons of Seinfeld are on Hulu, which owns the streaming rights for the entire series (get a free 7-day trial to Hulu here). If you prefer a physical copy, the complete series is available in a DVD box set, which covers all 180 episodes on 33 discs (Sorry, Seinfeld hasn’t been released on Blu-ray just yet). Purchase: $108.95 on Amazon.com.