Update: This interview was originally published in October 2020 and has been updated to reflect Goldbelly’s latest promotions.

They say the way to a person’s heart is through their stomach, and Questlove is hoping to spread a little bit of love this season by offering up his cult-famous Questlove Cheesesteaks for nationwide delivery through Goldbelly. The cheesesteaks, which launched in Philadelphia last year, are a vegetarian-friendly take on Questlove’s hometown classic, swapping beef for the plant-based meat substitute, Impossible. Right now, Goldbelly has Questlove’s Philly cheesesteak and all the cheesesteak offerings on its site for up to 25% off in celebration of National Philly Cheesesteak Day on March 25.

Can This Air Purifier Protect You From Covid-19?

Questlove, who’s an investor in Impossible Foods Inc. along with the likes of Leonardo DiCaprio and Bill Gates, says he wanted to make the cheesesteaks available as a way to promote healthier diet options, while helping to bring some joy and levity to people around the country, following a tumultuous year that he admits, has been “eye-opening.”

As part of the launch, a portion of the proceeds from every order will be donated to America’s Food Fund, which helps to support children, low-income families and seniors who have been affected by food insecurity during the Covid-19 pandemic.

Questlove spoke to Rolling Stone about his desire to give back through food, the surprising changes he’s made during quarantine, and the lessons we can all take away from a year that can’t end soon enough.

What are the components to a good cheesesteak?

Being a self-described “connoisseur of cheesesteaks,” I came up with what It think is the quintessential cheesesteak: Impossible “meat” with sauteed onions, white cheese (American and provolone), pickles, and banana peppers on Philly’s own Amoroso’s roll. It is NOT a cheesesteak without Amoroso rolls. And it has to be from Philadelphia. And yeah [fellow Philly native] Will Smith said if the bag doesn’t have a grease stain at the bottom he don’t want nothing to do with it.

For those who have doubts, trust me. When I first discovered Impossible, about six years ago, I immediately knew it was a game changer; it was the closest thing to meat I ever tasted. Since then, I have done a number of blindfold tests with everyone from my bandmates, to the crew at the Tonight Show. In one of those blindfold tests, no one could tell the difference between an Impossible Burger and a Shake Shack burger — I stumped them all. The same is true for the cheesesteak. I promise to maintain the integrity (in the cleanest way possible) and the soul of the Philadelphian Cheesesteak. Consumers are increasingly wanting options that are better for them and better for the planet they’re standing on. This is a cheesesteak for all eaters, which means that meat eaters are most definitely included. 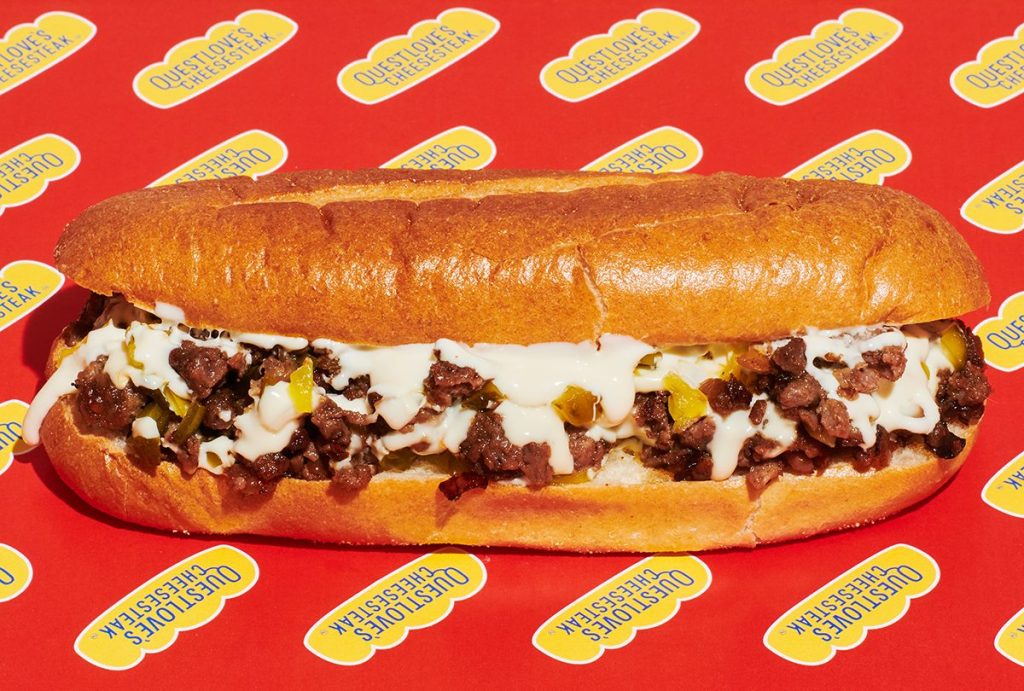 What was the thinking behind launching cheesesteak delivery through Goldbelly?

The idea of place has changed. You read about people who haven’t been able to get home to see their families, who are stuck in a city or a country for a long period of time. Being somewhere isn’t always the same as belonging somewhere. Giving people my take on a classic Philly cheesesteak helps to turn the year around, because it reminds people (not just Philadelphians) that places are real, that cities are real, that local scenes and cultures are real.

How does this idea of “comfort food” help placate some of the fears or anxieties people have felt this year?

Food is only one of those things that we’ve had to rethink this year—there’s also music and theater, sporting events, and parks and public transportation—but food is one of the most important ones. This is also a time to be thinking about those who are not able to put food on the table. A portion of the proceeds from every order will be donated to America’s Food Fund, an organization started by Laurene Powell Jobs and Leonardo DiCaprio, who share my commitment to ensuring that all people have access to food.

What have the past few months been like for you?

Eye-opening. It started out with promise in January, with me renting out a movie theater for 24 hours and about 200 of my pals for my birthday. Then I took it higher a month later DJing the best DJ set of my life (Jay and Bey’s Gold Party Oscar night) and then two weeks later the world and I were on punishment.

My girlfriend gave me a three-week period of sulking and panicking and then she smacked me out of it. Weird enough, she smacked me out of it with my own words; she was like, “Didn’t you write a book in which you encouraged millions of people to embrace boredom and silence so that they can channel their inner creativity? [Questlove’s book, “Creative Quest,” which was released last year]. I got it together in early May and I have to say that I made the most of this difficult time doing things I never thought I’d do in this lifetime.

What’s an example of something new you’ve tried or something different that you’ve done during the pandemic?

I used to laugh and clown people who did the things I’m doing right now. I left my cozy Manhattan digs for a farm upstate, complete with ducks and chickens who didn’t get along (and foxes who found them both tasty), not to mention every kind of bird, bear, deer, and rabbit in your personal space. I thought I was turning into Black Noah.

What advice do you have for people who are struggling to get this pandemic?

I know it sounds easier said than done, but “Don’t panic, it will be okay.” Then ask yourself: Are going to thrive in this — or drown? Somehow I managed to stay busy; I directed my first music documentary, found creative ways to DJ, made awesome use of Zoom conducting in-depth interviews with my favorite people, or sometimes just having social gatherings online. Before quarantining I think I had three home-cooked meals with family — my family or anyone’s family — a year. Now I’m on eight months in a row of family dinners (be careful for what you wish for).

Aside from perfecting that vegan cheesesteak, is there anything else you’ve learned recently?

I’ve seen people change for the better: embracing their creativity now that they have left the job they always hated, for example. I’ve seen so many people step in fear in the beginning only to rise like a phoenix later. 2020 is about leaving your comfort zone and really forcing you to deal with who you are, who you are with, and what your purpose on earth is. We all learned in 2020 — whether we wanted to learn or not.

Questlove’s cheesesteaks ship nationwide and are available in a four-pack, eight-pack or 12-pack, with pricing starting at $79 (with free shipping) on Goldbelly.com.