It might be hard, but Keegan-Michael Key wants you to break up with your old clothes.

To help dudes cut ties with those over-worn pieces (that we all have), the Emmy-winning actor and producer has teamed up with Stitch Fix, an online fashion styling service promising to “remix” men’s wardrobes for the better. After a style quiz about your favorite looks and brands — and your budget — Stitch Fix’s fashion experts send you a box of new clothes, curated to your tastes. Alternatively, you can brose a personalized shop that reflects your style.

Head to StitchFix.com to take a (free) comprehensive style quiz and shop their large men’s collection. It costs $20 upfront for a stylist to curate a box of clothes, and then you can choose to buy any of the pieces they select. 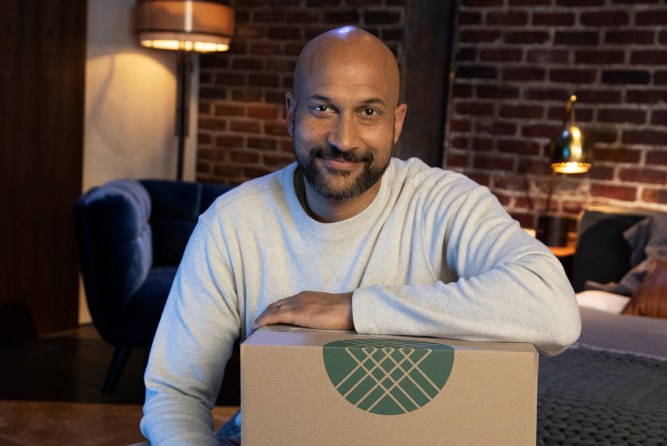 “For me, like a lot of guys, sometimes I need a little nudge to kind of keep from falling into a style rut,” Key tells Rolling Stone. “And I thought it would be interesting to have a platform to encourage other men to join me in breaking up with their outdated clothes.”

Key says his personalized Stitch Fix store consisted of things like cozy grown-up sweaters, workout gear from Adidas, and classics like Levi’s 501 jeans. “for me, the main thing is comfort,” says Key. “The best garment for me is something that might look streamlined but feels super roomy and comfortable.”

Central to the Keegan-Michael Key x Stitch Fix campaign is a Stitch Fix-commissioned survey on men’s struggles with their wardrobes. The survey found that 40% of American men have a harder time replacing worn-out clothing than ending a relationship, and that 46% of men say they hold onto clothes for sentimental reasons and lack of time for shopping. Another 28% of men admitted to regularly wearing items more than a decade old.

Sound familiar? It does to Key. Though he’s often seen sporting a tailored suit, the actor says he’s guilty of both holding onto clothes for sentimental reasons and wearing clothes that are over 10 years old. And he knows what pieces need to go: “it’s probably time for me to break up with some of my jerseys,” he says. “There are certain clothes that spark a memory or engender good feelings,” says Key, “I mean, I have t-shirts that release endorphins when I look at them! […] It’s almost like you should put the T-shirt in a shadow box and hang it on your wall. But really, what you probably need to do is get rid of that,” admits the Key & Peele co-creator.

Another pillar of Key’s campaign with Stitch Fix is a throwback R&B-inspired music video, which sees the actor urging men to refresh their wardrobes. As someone who grew up in the R&B era, Key says making the video was “joyful,” and that, “it was nice to be able to dive back into [R&B] and look at that era and say, okay, I like the concept of breaking up with old clothes like we would break up with a woman.”

As a globe-trotting actor, Key is deeply familiar with the importance of a streamlined, stylish wardrobe. Of late, Key’s roles have taken him from England, where he was filming an upcoming Willy Wonka prequel, Wonka (which also stars Timothée Chalamet as a young Willy Wonka), to Fire Island, New York, where he was working an upcoming Hulu series called Reboot from Modern Family creator Steven Levitan.

Key’s latest work is The Pentaverate — a comedy series created by and starring the legendary Mike Myers — which hit Netflix on May 5. Myers was a “dream” to work with, according to Key: “It’s amazing to be able to work with somebody who uses such precision in their work and also feels very free and open simultaneously,” says Key. “And he plays like eight characters in [The Pentaverate] and all of them have their own quirks and their own movements. He’s really a genius.” 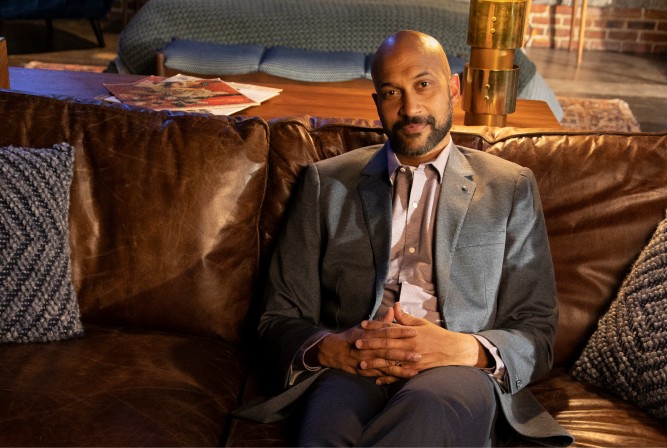 Key is also excited to release an upcoming movie with longtime collaborator Jordan Peele later this year. Called Wendell & Wild, the stop-motion animated movie is directed by Henry Selick (Coraline, The Nightmare Before Christmas) and written by Selick and Peele.

“[Wendell & Wild] is the first collaboration that Jordan [Peele] and I have done together in a while,” notes Key. But he says their chemistry is as productive (and as funny) as ever, saying “it’s just like riding a bike” when he and Peele start brainstorming together. “We only have to spend about 15 minutes with each other chatting and then we have a mind-meld where we start sharing the same brain again.”

And if you were curious about that video of Tom Cruise jumping over Key, it’s (partially) fake. Key tells us he was at an event with actor Miles Fisher when the latter asked Key if he wanted to make a Tom Cruise deep fake. “[Fischer] said ‘do you want to make a tom cruise deep fake video?’ And my wife Elle and I were going ‘sure, yeah, let’s do that’,” says Key, laughing. “And [Fisher] goes ‘you stand there’ and all of a sudden he just jumps over my head.”