Let’s face it: Harry Styles has been a fashion inspiration ever since he grew out his hair that one year and started wearing printed shirts unbuttoned down to there as a member of One Direction. But in his more recent, solo years, the singer has downright achieved fashion icon status, pushing the envelope and re-imagining sartorial tropes with both his on-stage and off-stage style.

The transformation of Styles from teen heartthrob to rakish leading man has been in part due to the influence of Gucci’s Creative Director, Alessandro Michele, who has dressed Styles on multiple occasions, for everything from world tours, to red carpet premieres, to that Vogue cover in a Gucci dress. Now, their friendship has birthed a new co-designed collection, inspired by their shared passion for creativity, exploration and going against the grain. 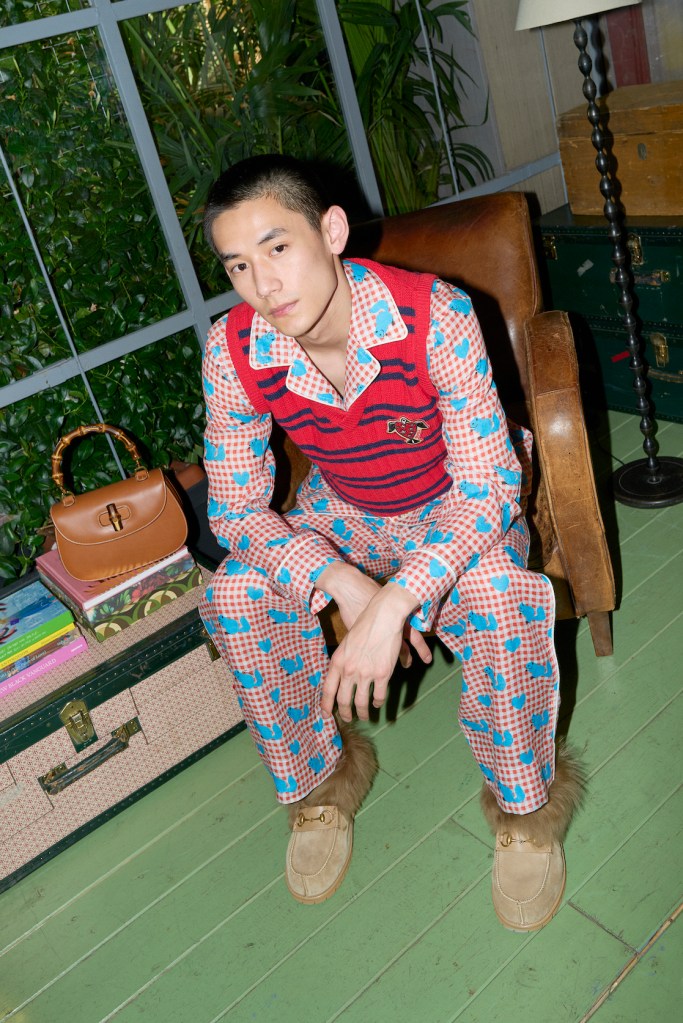 Dubbed the Gucci “HA HA HA” collection, the collection features jackets, coats, pants, shirts and accessories with Seventies-style silhouettes and boho prints mixed in with British-inspired patterns and classic men’s tailoring. The name of the collection is drawn from a combination of “Harry” and “Alessandro’s” initials, but it’s also a play on the laughing face emoji, which Gucci says is a way that Michele and Styles have ended their text messages to each other for years.

Those text messages (along with countless phone calls and IRL meetings) culminated in a wealth of ideas that the two translated into a collection of sharply-styled pieces that feel at once irreverent and important. Gucci says both Styles and Michele wanted to challenge the ideas of conventional menswear, pushing the outfits forward by experimenting with shapes, proportions and prints.

“Gucci HA HA HA is a playful collection designed to act as a herald of new visions of beauty, crafted with liberating codes that eliminate the ritual complexities of fashion collections,” the brand says in a release, adding that both Styles and Michele were drawn to the ideas of “continuous creative contamination, and the drive to explore.”

For his part, Michele says the whole collection came together quite organically. “The idea of working together came to me one day while we were talking on the phone,” Michele says. “I proposed creating a ‘dream wardrobe’ with him, starting from those small oddities that come together in childlike visions. We ended up with a mix of aesthetics from 1970s pop and bohemian to the revision of the image of the gentleman in an overturned memory of men’s tailoring.”

“Harry has an incredible sense of fashion,” Michele continues. “Observing his ability to combine items of clothing in a way that is out of the ordinary compared to the required standards of taste and common sense and the homogenization of appearance, I came to understand that the styling of a look is a generator of differences and of powers, as are his reactions to the designs I have created for him, which he has always made his own; these reactions restore me with a rush of freedom every time.”

Michele and Styles first met in 2015, when Styles’ longtime stylist, Harry Lambert, pulled a Gucci floral suit for the then-boybander to wear to the American Music Awards. The look helped Styles stand out among his monochromatic bandmates and established him as a true fashion head (Michele had just taken over at Gucci a few months earlier). A few seasons later, Michele would tap Styles to front a formal Gucci campaign. Their relationship blossomed from there.

The new collection is the culmination of years of friendship and idea exchanges between the two, with Gucci calling it “the landing place of an inventive two-person journey” and “the synthesis of a friendship.” And while both Michele and Styles bring different life experiences, perspectives and yes, even fashion influences, to the table, their signatures are very much present in everything from the Italian fabrics and romantic details to the classic Prince of Wales check that’s re-worked in novel styles and silhouettes. Gucci says to also expect everything from printed pajamas and velvet suits to pleated kilts “with leather regulating straps” in the “HA HA HA” collection.

There are 25 pieces in total for Harry Styles x Gucci “HA HA HA” collection, which will hits stores and Gucci.com in October. Pricing for the collection has yet to be announced.