Window-mounted air conditioners may not be the most aesthetically pleasing appliance, but there is no denying they can be absolutely life-saving (trust me). The most basic function of a window air conditioner is to draw in hot air and blow back cool. Some modern models include automatic sensors and eco functions, which automatically shut off when the room reaches a preset temperature. These ACs usually include a fan setting as well, which uses less energy because it isn’t utilizing a cooling function.

Beyond the basics, however, there are still several features, details, and functions that set some air conditioners above the rest.

What Are the Best Window Air Conditioners?

Range of Settings: Larger units might have a digital thermometer, but we find that for compact models used to cool small spaces, this feature isn’t really necessary, and is often imprecise in any case. Instead, we look for a wide range of automatic temperature settings to give you better control over the atmosphere.

Programmable Timer: Some air conditioners allow you to set the unit on a timer, which automatically turns on or off depending on the time of day. This comes in handy, for example, for automatically shutting off the AC when you leave for work, but starting up again a few minutes before you come home so you don’t walk into an oven. Some even include a sleep setting, which increases the specified temperature incrementally over a period of time, to keep you comfortable at night.

Remote: We always love a remote control, especially if your window unit is in an awkward or hard-to-reach spot. Some remotes even have their own sensors, which tell you when to increase or decrease the temperature without needing to be physically beside the unit.

Details: There are some relatively small considerations that are easy to overlook, but we think make a big difference in the end. Does the unit have a filter alert, for example, which reminds you when to change out the filter? We also think about how effectively the AC dehumidifies as well as cools, which plays a big role in your space’s comfort level. And you’ll want to consider noise level. The best air conditioners will keep you cool — without keeping you up at night.

There are plenty of reasons to love this compact little window AC from hOmeLabs, which quickly and efficiently cools small areas. It doesn’t come with a ton of bells and whistles, but is instead straightforward, easy to use, and minimalist.

According to the manufacturer, it can completely — and quietly — cool a room in about 15 minutes. The seven temperature settings are particularly nice, as small units like this without digital thermostats are often lacking in the temperature range department.

Because it is such a small and basic unit, however, it does have some limitations. We wouldn’t recommend leaving it on for several hours at a time, and it won’t be as effective in larger areas. 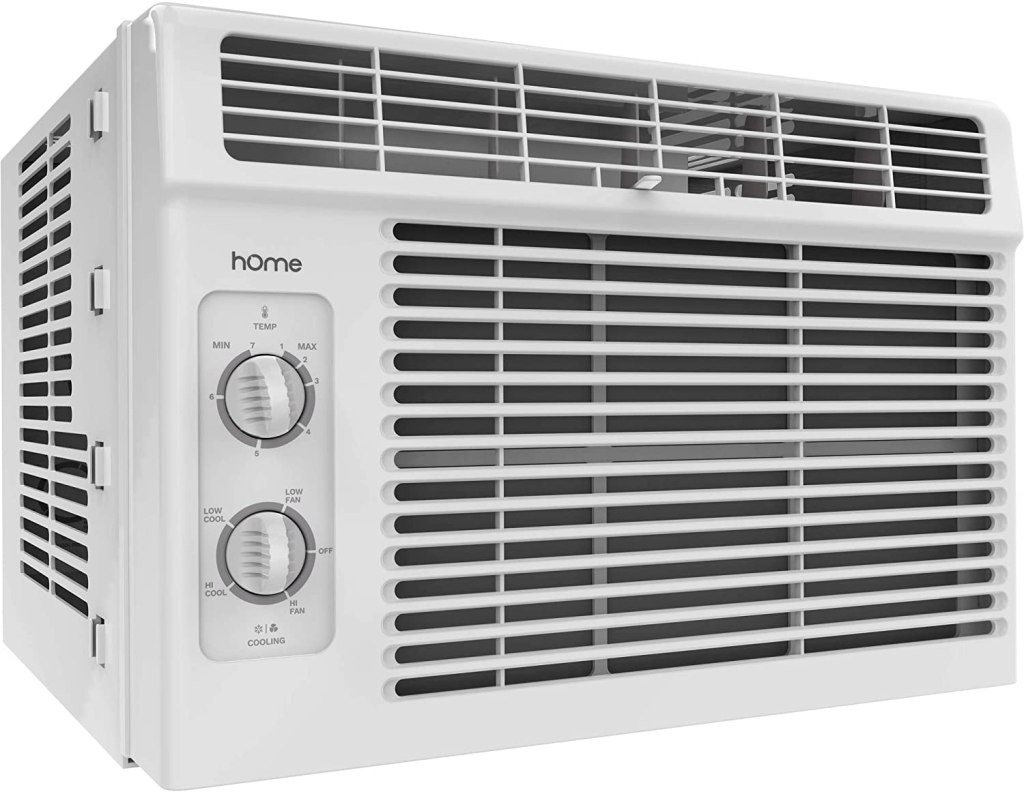 Another mini window unit, we like this Midea air conditioner for many of the same reasons we’re fans of the hOmeLabs AC. Despite its small size, it reliably and quickly cools smaller spaces, has two-way air direction, and is operated by simple mechanical rotary dials.

The quietness of the fan fan this little guy is particularly impressive, with reviews saying the working noise level won’t disturb your sleep, work or other activities. The reusable and washable mesh filter reduces bacteria, room odors and other airborne particles, which seems pretty standard, but makes a huge difference if you’re an allergy-sufferer. One downside is that it doesn’t have a dehumidifying function, but for that you can go with any of Midea’s slightly larger AC models. 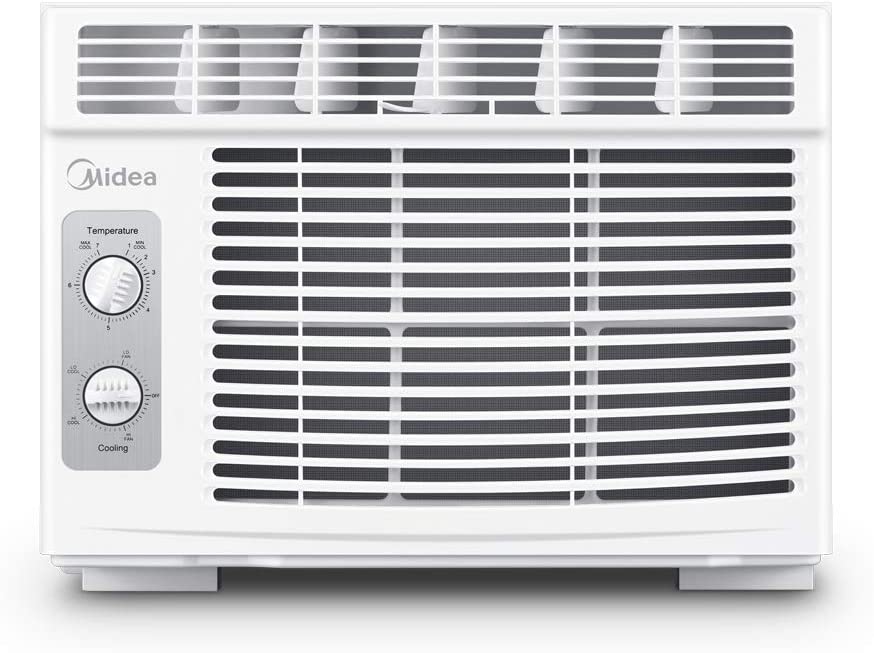 No window AC is going to be winning beauty contests, but if we had to pick a winner, this one would be it for sheer simplicity. But TOSOT’s Window Air Conditioner is more than just a pretty face.

It has a dehumidifier and fan-only mode, as “sleep mode” that adjusts the temperature throughout the night for optimal sleeping comfort. The result is undeniably effective cooling with a satisfyingly low noise level. It comes with a remote as well — another point in the plus column.

The other thing we like about this unit is its versatility. With the push of a button, the TOSOT has an air sweep mechanism to provide more even air distribution to the whole room at different angles. The downside is that it can also be difficult to assemble. 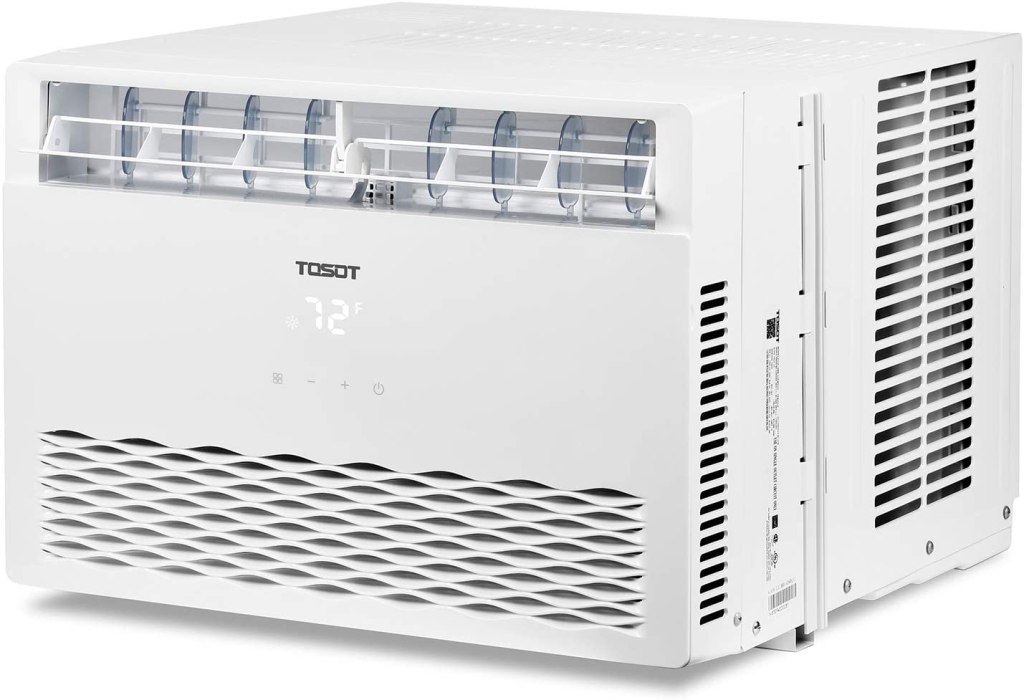 If you do happen to need an AC with a little more oomph, this LG unit comes with a bit more power. Its cooling and dehumidifying features, like the four-way air direction, are effective in larger spaces and for longer amounts of time. Cool air blows around the room rather than directly at you, making for a more comfortable environment.

It also comes with a few of those handy automatic features you might be looking for, including a 24-hour timer and automatic restart. Oh, and it has a remote control too. 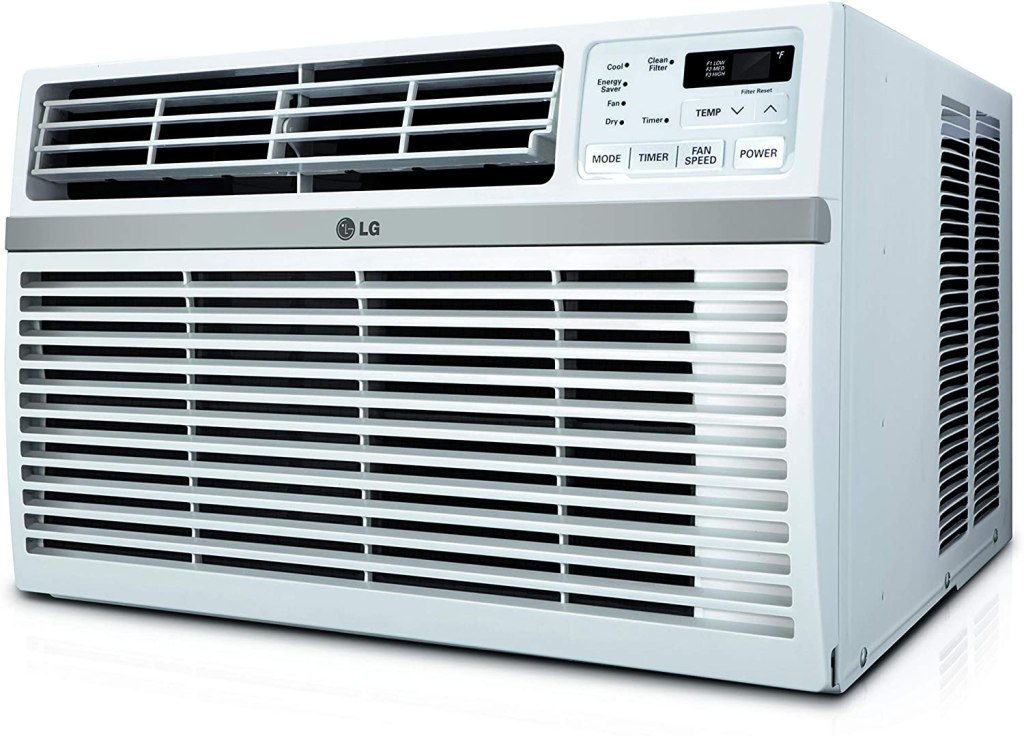