With the buzz for Black Panther Wakanda Forever, and the upcoming swarm of MCU shows streaming on Disney+, 2022 has shaped up to be another big year for the Marvel Universe.

Founded more than 80 years ago (then known as “Timely Comics”), the Marvel Comics as we know it today really came into prominence in the early Sixties, when a then-small town writer named Stan Lee introduced what many have called the first “grown up” superheroes, with the release of “The Fantastic Four #1.“

Marvel Studios, meanwhile, was founded more than 25 years ago, and its 23 films have grossed more than $22 billion at the global box office, making it the highest-grossing film franchise of all time. With a strong streaming presence now on Disney+, the Marvel Cinematic Universe shows no signs of slowing down.

To celebrate the release of the latest in the Mavel Multiverse franchise, we’ve rounded up some of the best Marvel-related books, merch and collectibles, fit for wannabe superheroes, and casual fans alike. 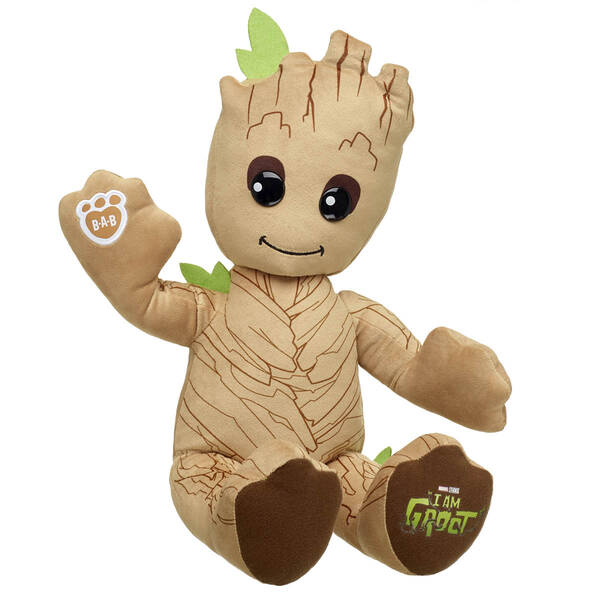 If you’re a Guardians of the Galaxy fan and want your own ‘Flora colossus’ you can now grab adorable Baby Groot in Build-A-bear form. This cuddly toy features a pretty accurate Baby Groot design, including little leaves sprouting from its plush form. The paw also has the iconic slogan “I Am Groot” embedded in it. 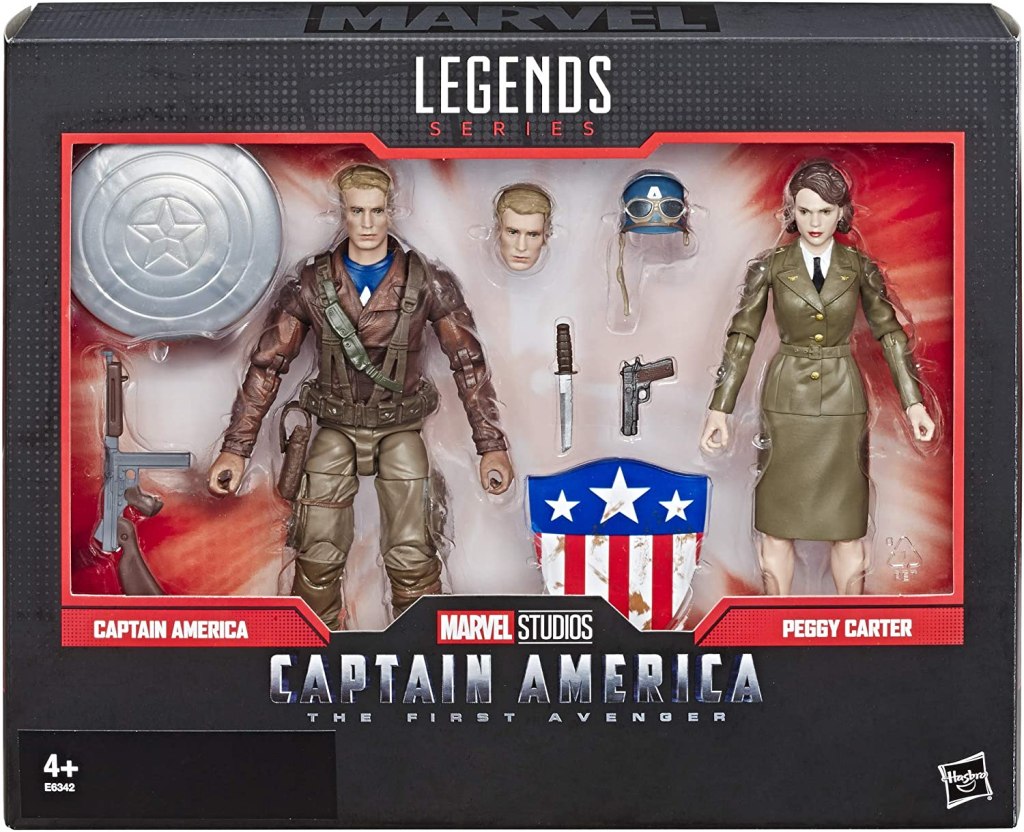 This Amazon-exclusive collectable two-pack features six-inch scale figures of Captain America and Peggy Carter with their MCU-inspired designs from Captain America: The First Avenger. While higher-end figurines can cost upwards of $250, the Marvel Legends series has premium articulation and intricate character detailing for its price point. With alternate sets of hands and several accessories (including Cap’s original shield), you can geek out and create some really dynamic displays. 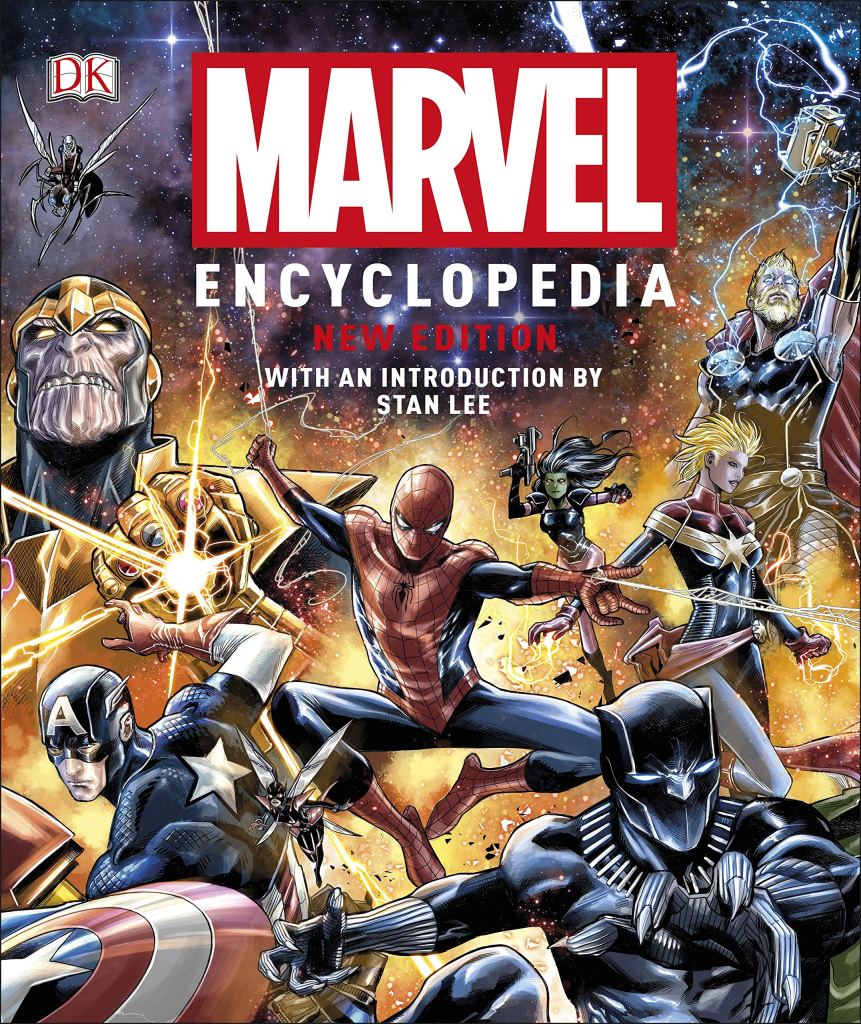 This beautiful hardcover, 448-page tome features an introduction from Stan Lee and details on more than 1200 Marvel characters, from superheroes to villains. This updated edition features expanded entries, and the addition of more than 50 new characters, including Anti-Venom, Sabreclaw, Doctor Nemesis and Spider-Man 2211. It also includes updates from the latest events in The Age of Ultron and Infinity War, among others. Each entry features original artwork from the Marvel comic books, along with text from the preeminent authorities in the comics, graphic novel and entertainment space. 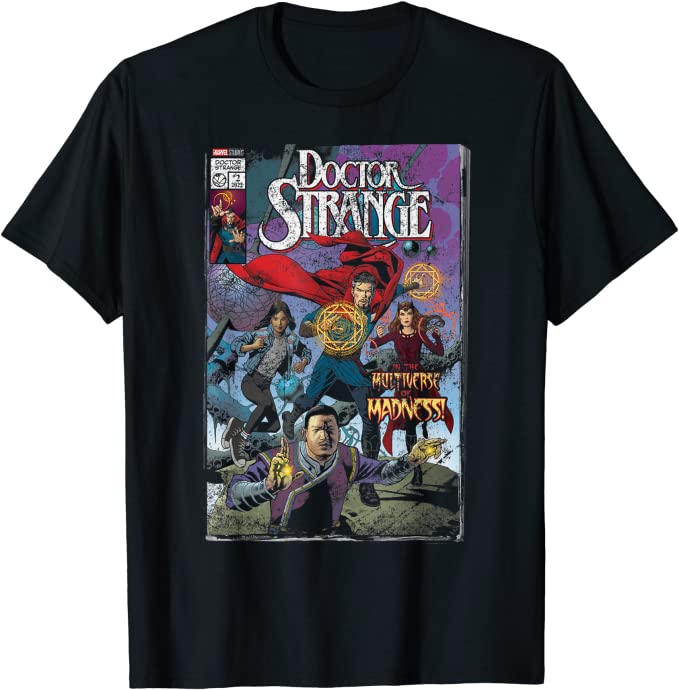 Maybe you need some gear for when you hit the theaters or for in the future when you’re having a Marvel movie night with your friends.

Go with this comic book-inspired Doctor Strange in the Multiverse of Madness t-shirt, with sizes available for men, women and teens. Its made out of cotton for a lightweight fit and is machine-washable for easy cleaning. The graphic on the front has all four main characters from the movie caught in an action sequence, further adding to the t-shirt’s allure. It’s also officially-licensed Marvel merch, so you know you’re buying a quality product. 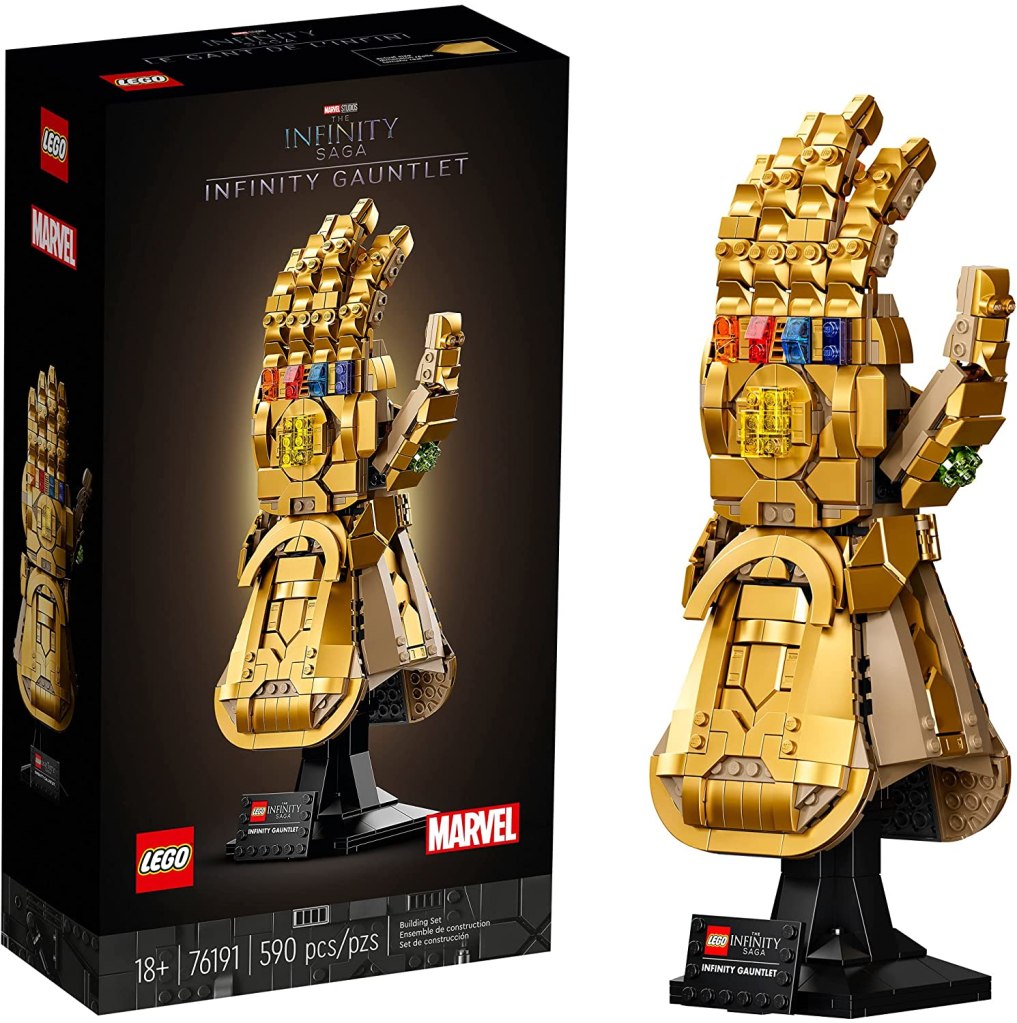 Capture the likeness of Thanos’ gauntlet and the Infinity Stones within with this construction kit for the classic Infinity Gauntlet. This LEGO build-and-display model stands 12.5 inches high and five inches wide on its base, and contains 590 pieces. But don’t be too intimidated—Marvel enthusiasts will love the level of detail achieved from simple bricks, and model-builders will love the rewarding challenge. 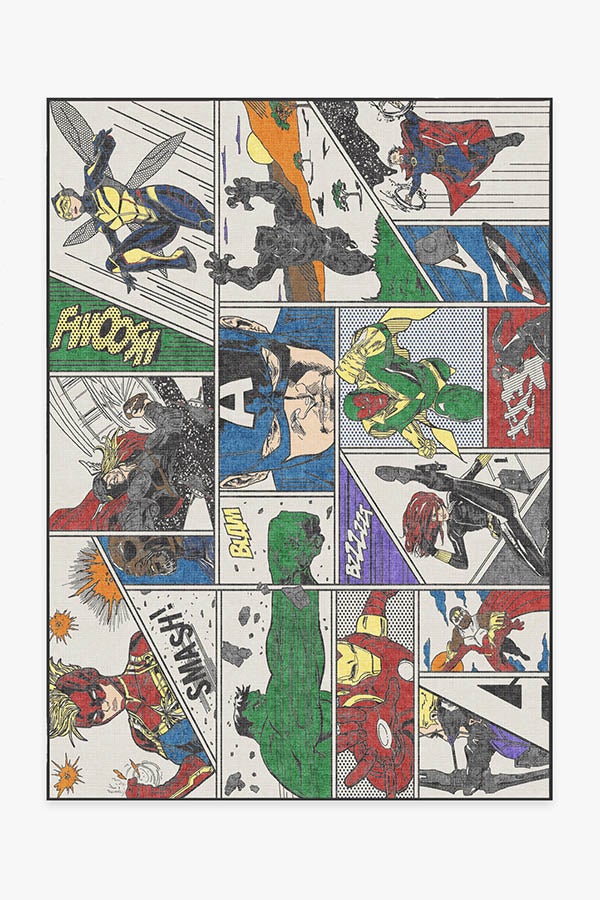 Ruggable recently announced a new Marvel collection of their famous washable rugs inspired by your favorite superheroes including Spider-Man, Iron Man and Captain America. Sizes run from 2’x3′ to as high as 9′ x 12′ depending on your space and home decor preferences.

My personal favorite from the Ruggable X Marvel collection is the Avengers Assemble Technicolor Rug, which features a comic-book style design with iconic MCU characters. You can grab this option in the multicolor version or if you’re a fan of monotones, go with the black and white version.

All Ruggable rugs are washable, which means you can easily dump them into your washing machine to prevent any stains over time.

Beterbiev vs. Yarde Livestream: How to Watch the Championship Boxing Match Online

7. Shang-Chi and the Legend of the Ten Rings Blaster 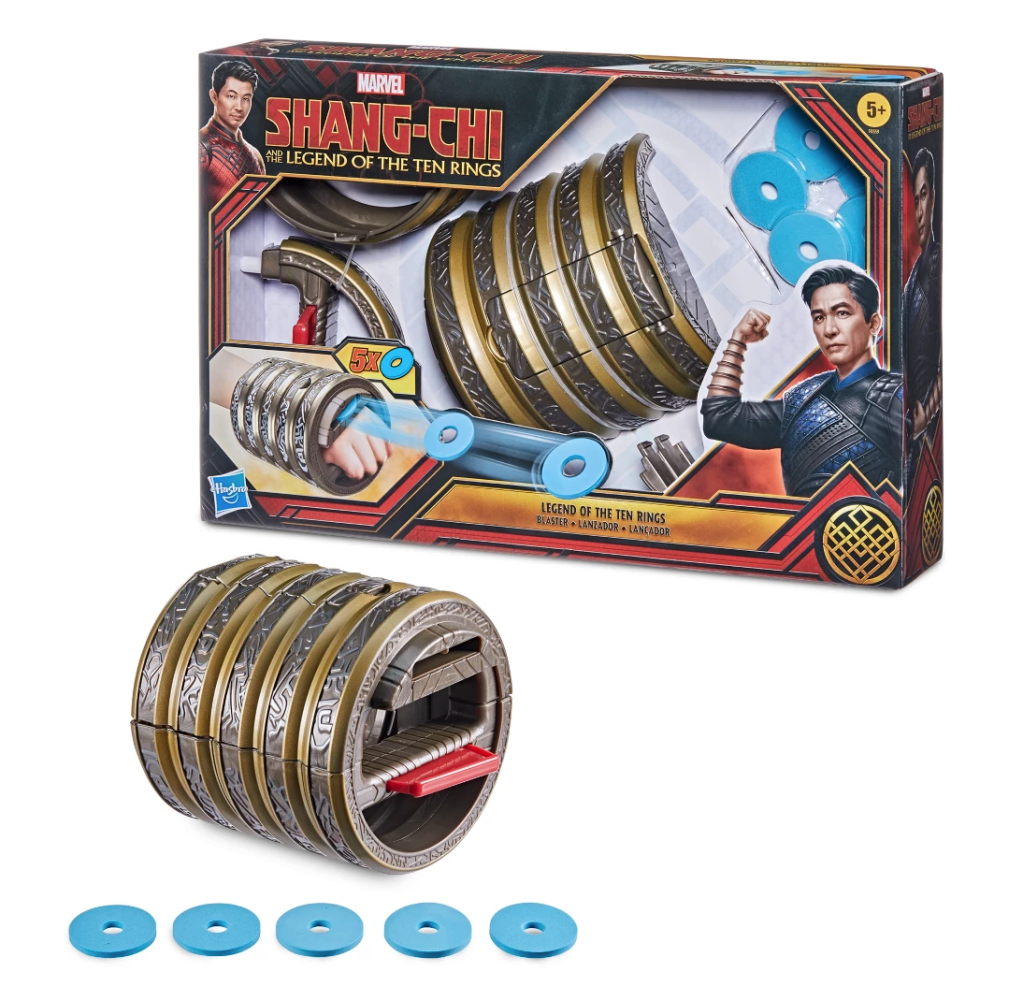 Challenge any foe in your way! This battle-ready blaster brings the power the Ten Rings to life from the film Shang-Chi. This wearable blaster fits over your wrist, and comes with five rings that eject when you squeeze the internal lever. You can use this gear for roleplaying, put it on display, or for whenever you just feel like shooting magical discs around your apartment. 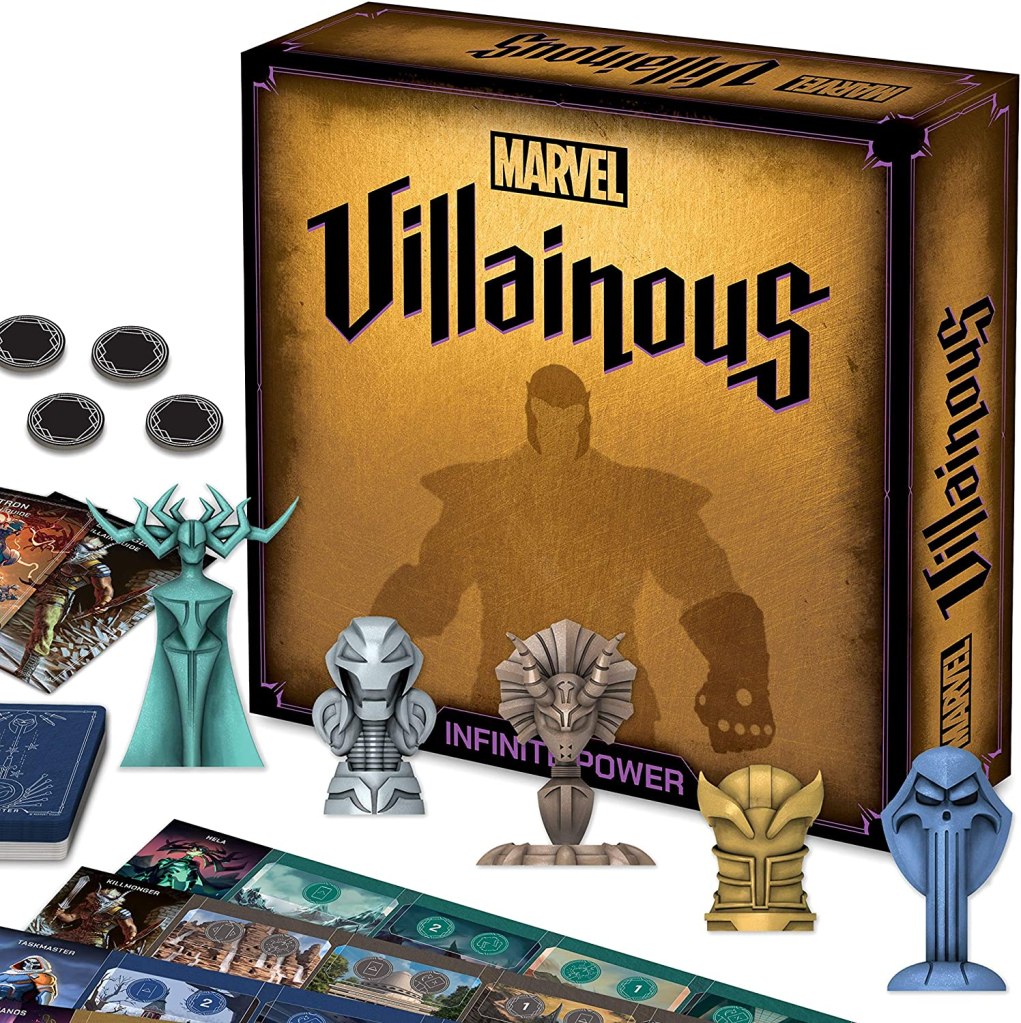 Heroes beware! Face off against Earth’s mightiest heroes in the Marvel edition of the Villainous board game series. The game supports 2-4 players with up to 80 minutes of gameplay, and you can adjust the difficult so you can raise the stakes depending on the round. Players can chose to be Thanos, Hela, Ultron, Taskmaster, or Killmonger with individual sculpted figurines, fate decks, soul tokens, and more. Immersive storytelling helps both hardcore and casual Marvel fans alike will feel like they can truly take over the universe. 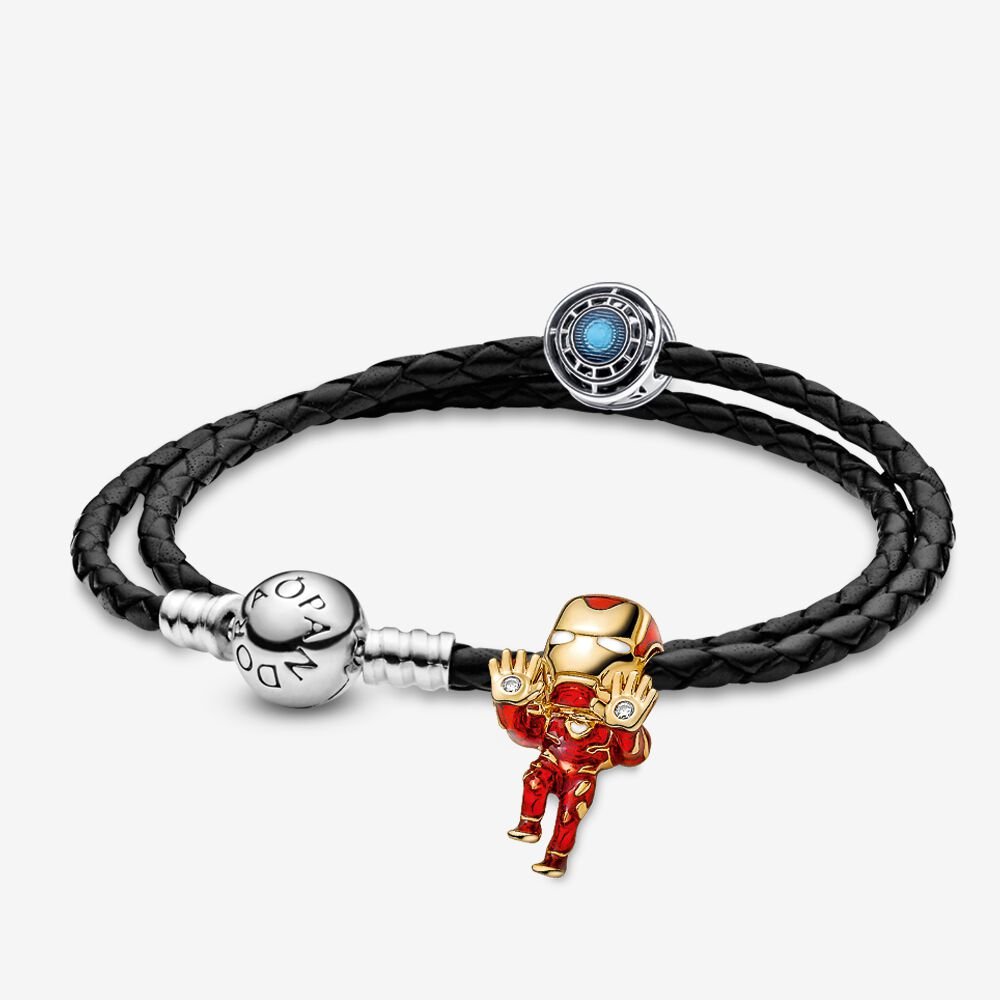 Marvel and Pandora recently collaborated together to release a jewelry collection with necklaces, bracelets, charms and rings, all inspired from Marvel characters.

One of our favorites is this Marvel I Love You 3000 Bracelet Set, which includes a double black leather bracelet and two charms, the gold plated Iron Man charm, and an arc reactor charm with the words “I love you 3000” embedded on the back. You can also choose to buy both charms separately and add them to the Avenger’s Snake Chain Bracelet which features the original Avengers logo as its clasp. 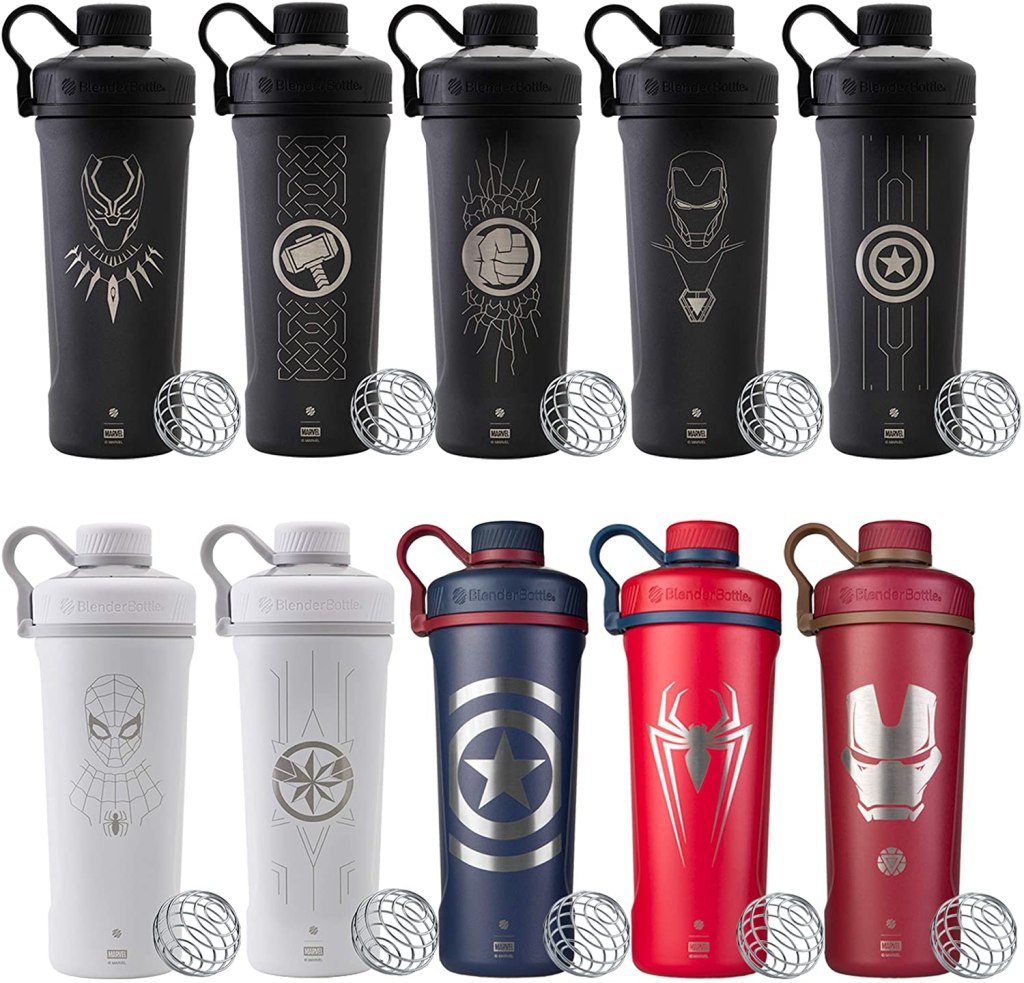 You can’t protect the universe without being fully hydrated first. This Captain America-inspired steel bottle has a patented “BlenderBall” wire whisk that can easily mix up smoothies and protein shakes. It stays icy cold too for 24 hours with its double-walled insulated design, and holds up to a whopping 26 oz. of your beverage of choice. The bottle line features multiple design choices, from Black Panther to Captain Marvel, so you can pick your best hero representation. 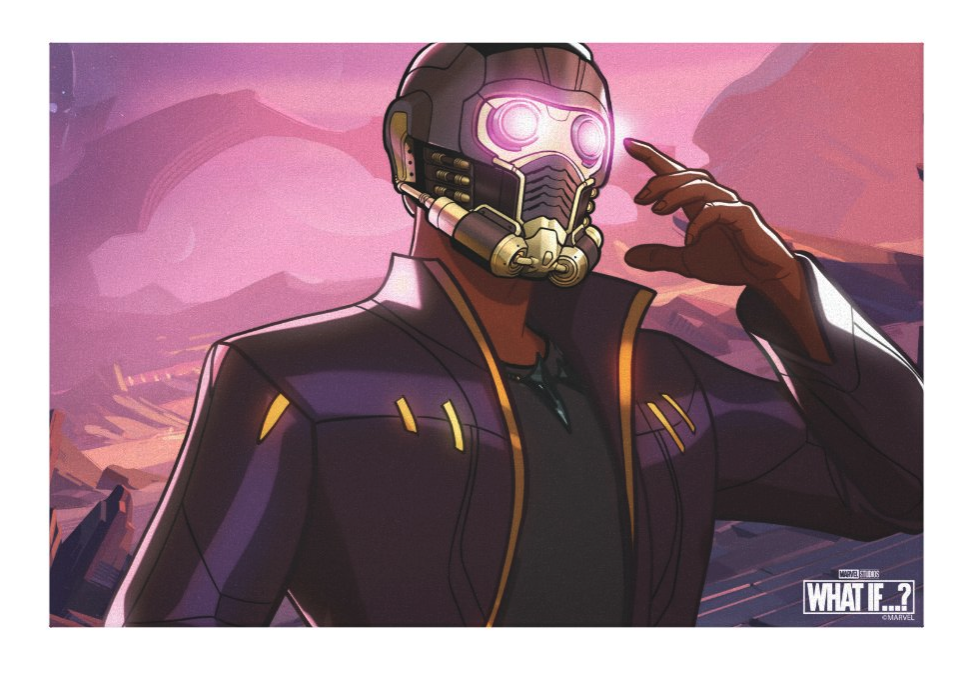 shopDisney has a number of commemorative canvas prints available and ready to ship in time for your next gift-giving occasion, including this wrapped print. Part of the What If…? series, this gallery-quality print features T’Challa in the episode that reimagines him in a universe where he becomes Star Lord from Guardians of the Galaxy. For fans of the MCU, or in appreciation for Chadwick Boseman’s last posthumous role, this print can be customized for size and displayed anywhere. It also has a cotton-poly blend, and an instant-dry canvases for long a lasting, fade resistant print.

12. Shang-Chi and the Legend of the Ten Rings Limited Edition Pin Set 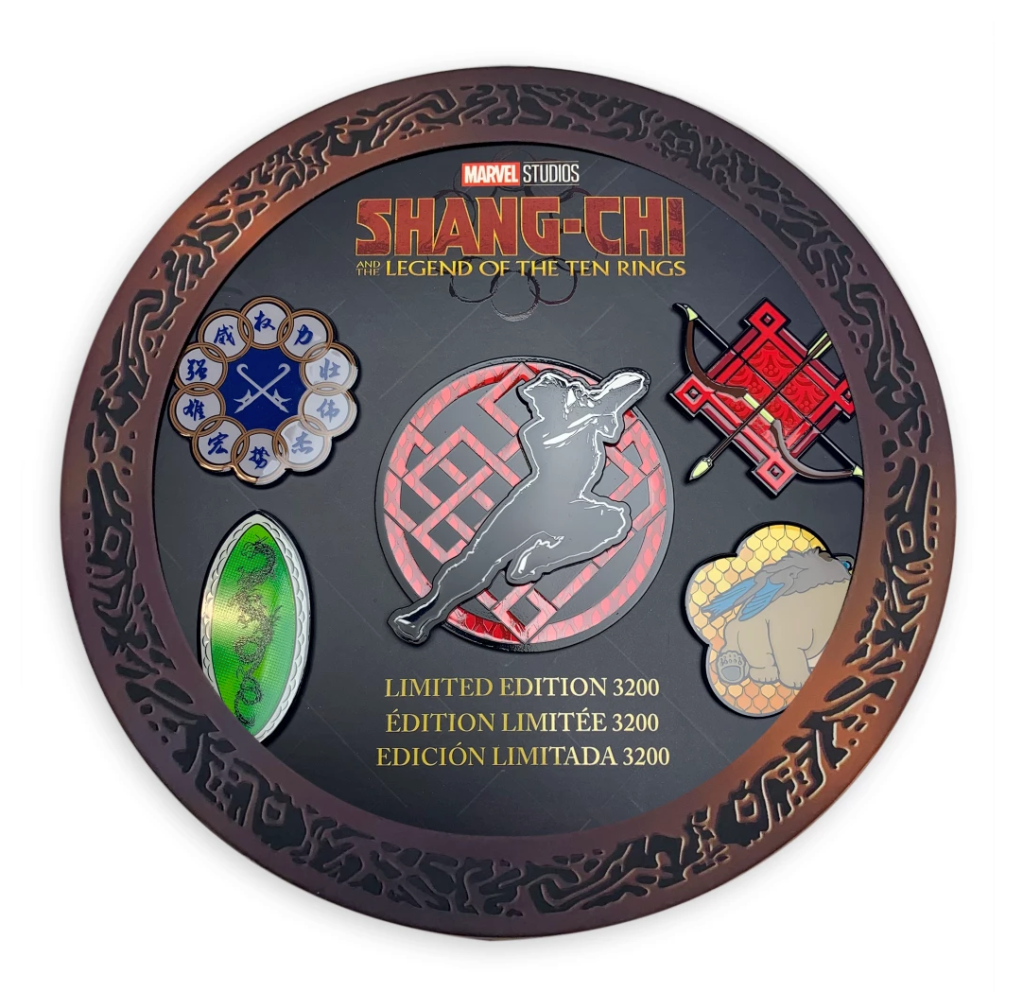 If you want to wield the mysterious forces behind these Shang-Chi and the Legend of the Ten Rings pins, you’re going to have to act fast—only 3,200 were made! The legacy of their bold power continues with these designs, including enamel pin-on-pin Shang-Chi, Morris, Ten Rings, bow and arrow, and dragon. Fashionable fans of the MCU can chose to wield the pins as part of their daily ensemble, or display it in its original decorative card backing. 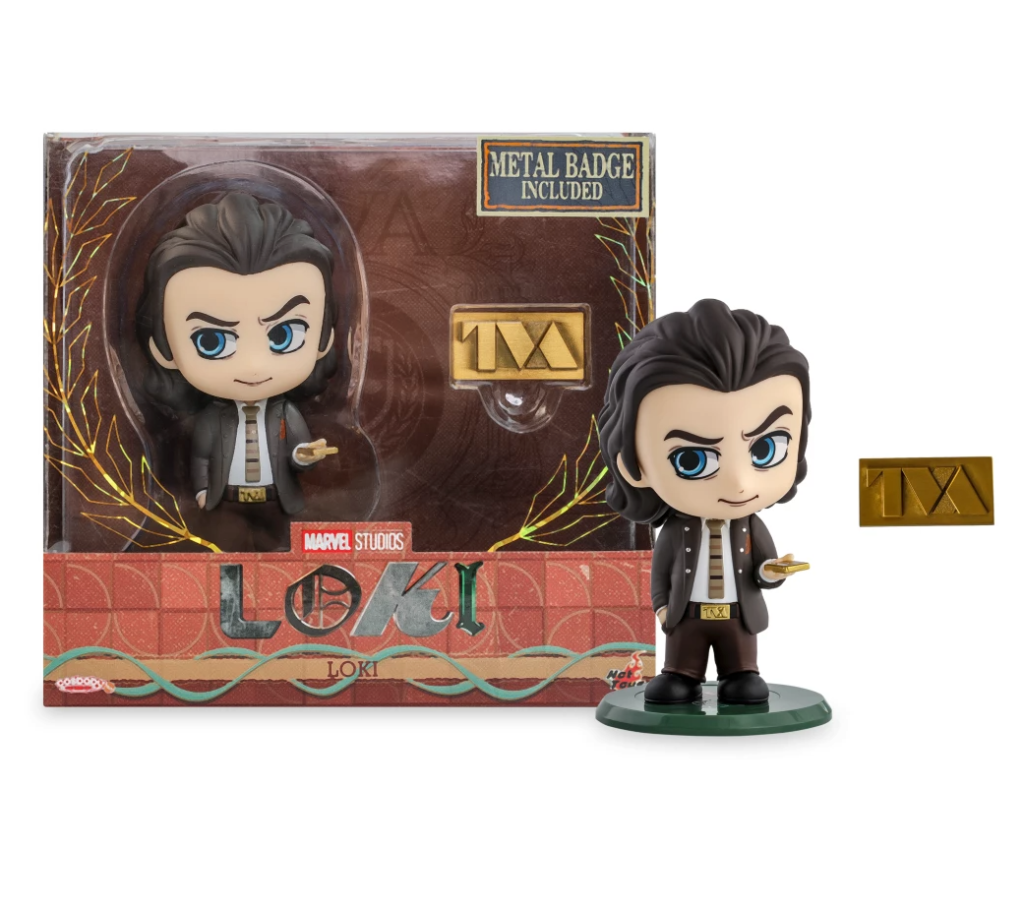 For something a bit more collectible from one of the latest additions to the MCU, Loki, the God of Mischief himself is now in figurine form, as imagined by the folks at Hot Toys. The stylized mon-articulated collectible stands at 4 inches tall and features incredible detail, right down to the embroidered metal Time Variance Authority badge. The bobble-head comes in a window display pack that’s great for putting on your desk at the TVA (or gifting). 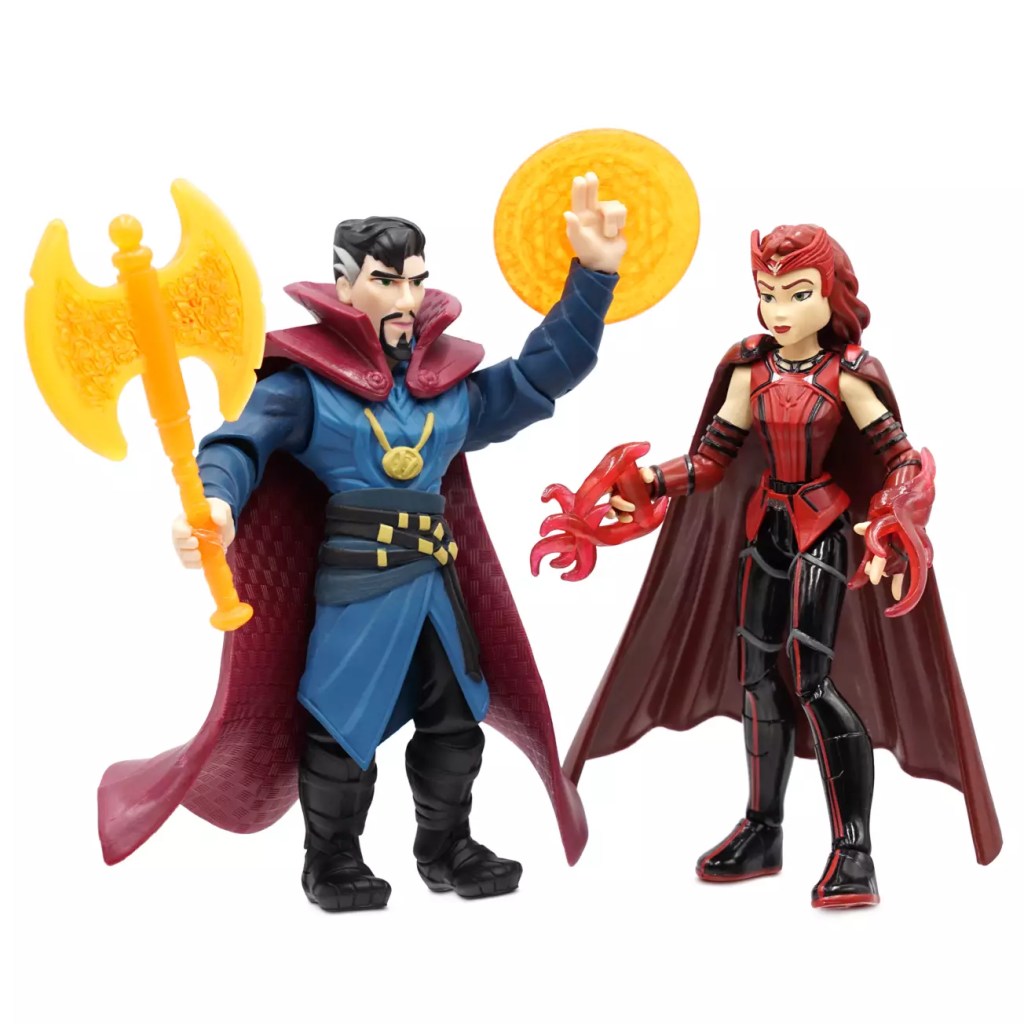 If you’ve just watched Doctor Strange in the Multiverse of Madness or have plans to see the new Marvel movie with your friends soon, grab this action figure set.

It’s got both Doctor Strange and Scarlet Witch replicas along with a bunch of accessories, making this a great collector’s item to add to your desk or bookshelf. You’ll be able to adjust their poses, as well as change up the accessories on these Marvel action figures. 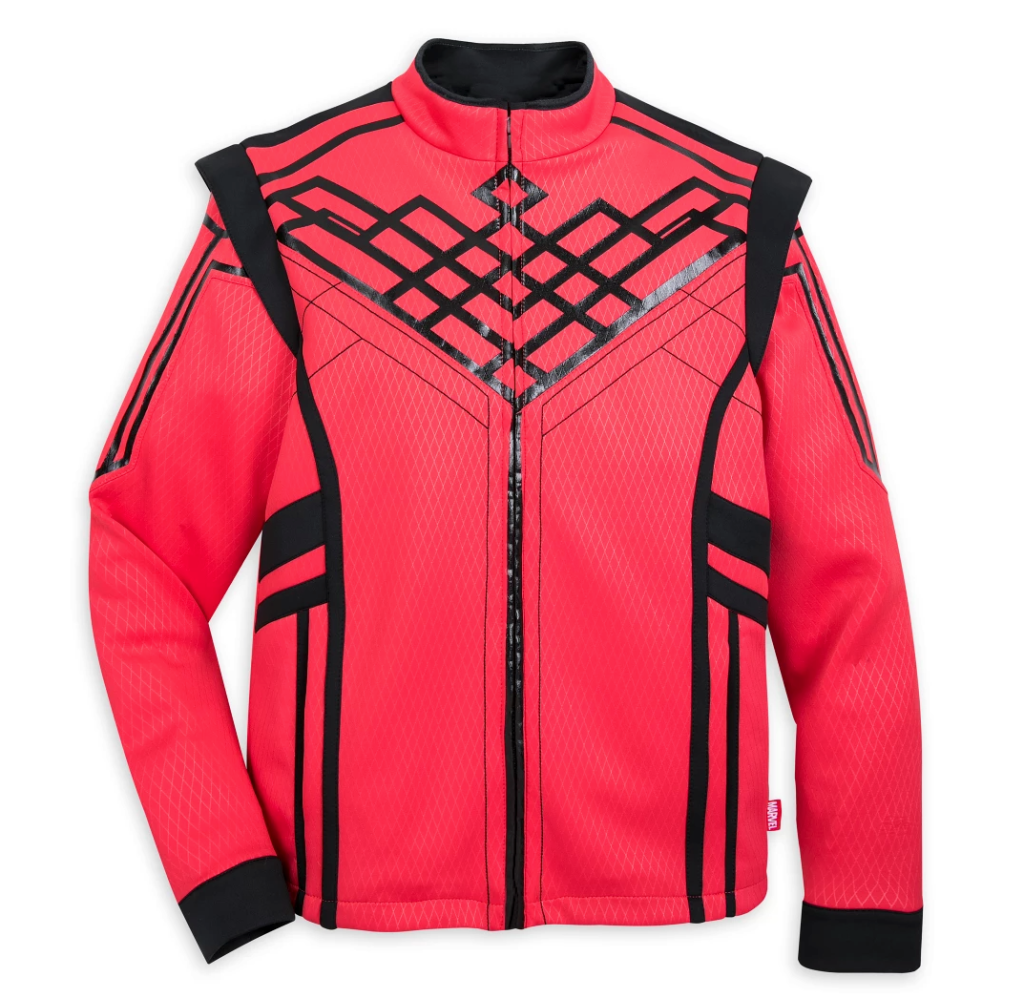 Of course, Marvel celebrated the release of Shang-Chi and the Legend of the Ten Rings with film-inspired clothing that feature designs like Shang-Chi’s emblem or cosplay-adjacent styles like this jacket. The patterned screen art on chest and sleeves is inspired by the icon design on Shang-Chi’s armor, and with fabric shoulder accents that will have you feeling like a warrior.

‘I Hope They Stomp His Ass’: Memphis Police Release Video of Fatal Beating of Tyre Nichols

Express yourself with the new Urban Decay x Marvel Studios eyeshadow palette. Mix and match with shades like ‘Gamma Glow’ (shimmery light yellow) and ‘Hulk Out’ (metallic lime green). Each shade is highly pigmented and blendable, and Urban Decay offers a nifty tutorial if you’re new to experimenting with your eye makeup.