We guarantee that if you have a kitchen, and cook even a little bit in said kitchen, there will be some leftover scraps — we’re talking coffee grounds, eggshells, fruit peels, etc. Composting is an easy way to reduce food waste, and take the load off on the amount of trash you’re taking out each week, and nothing makes it easier than a tabletop composter.

The best compost bins let you collect kitchen scraps as you cook indoors, and don’t require the upkeep or skill of maintaining an outdoor composting pile (and bonus points: you’ll still get free fertilizer for your garden!) Rather than just tossing your waste in an open bowl, which can get smelly and honestly a little gross, countertop compost bins let you control the odor and collect all the scraps in one place.

You may be loathe to get another gadget that takes up precious countertop real estate, but these bins are worth it, and come in all kinds of varieties to make your kitchen a little greener. From minimalist bins that you can use to carry out and discard your scraps outdoors, to worm bins and fully-automated recyclers that break down the waste for you, there’s a composter out there for everyone. Here’s what you need to know when buying a home compost bin.

What Are the Best Compost Bins?

The best tabletop compost bins allow you to collect kitchen waste (except for dairy or meat, never compost those products) in a convenient way so you can toss it on a compost pile or take it to a collection center later. There are a few things to keep in mind when shopping for a composter, so here’s what to consider.

Size: Consider how big of a space you have to work with and how often you’re willing to turn over the compost when you buy a bin. Smaller bins need be emptied more frequently, but they’re significantly more portable if you have your own outdoor compost pile, or can take it outside for compost pickup. Larger bins are more cumbersome to place, but also accommodate more scraps.

Odor: The material of your bin matters when it comes to keeping away pesky flies and unwanted smelliness. Stainless steel and other metal composters are long-lasting and won’t rust, but also need to be cleaned out frequently for odor control. Plastic bins are the most common, and your best bet to beat the smell and spillage, but can be a little counterintuitive if you’re trying to reduce your overall plastic usage.

Worms vs. Liners: Kitchen compost bins can be pretty basic and easy to maintain if you just want a place to toss extra scraps while you prep your meals. But if you want to be a more hands-on composter, than worm bins allow worms (yes, live worms) to actually break down the waste and compost right on your tabletop. But they be high-maintenance (you basically have pet worms now), so getting a bin with biodegradable liners is a good in-between.

Now that you’re ready to reduce, reuse, and recycle, here are our top picks for countertop compost bins. 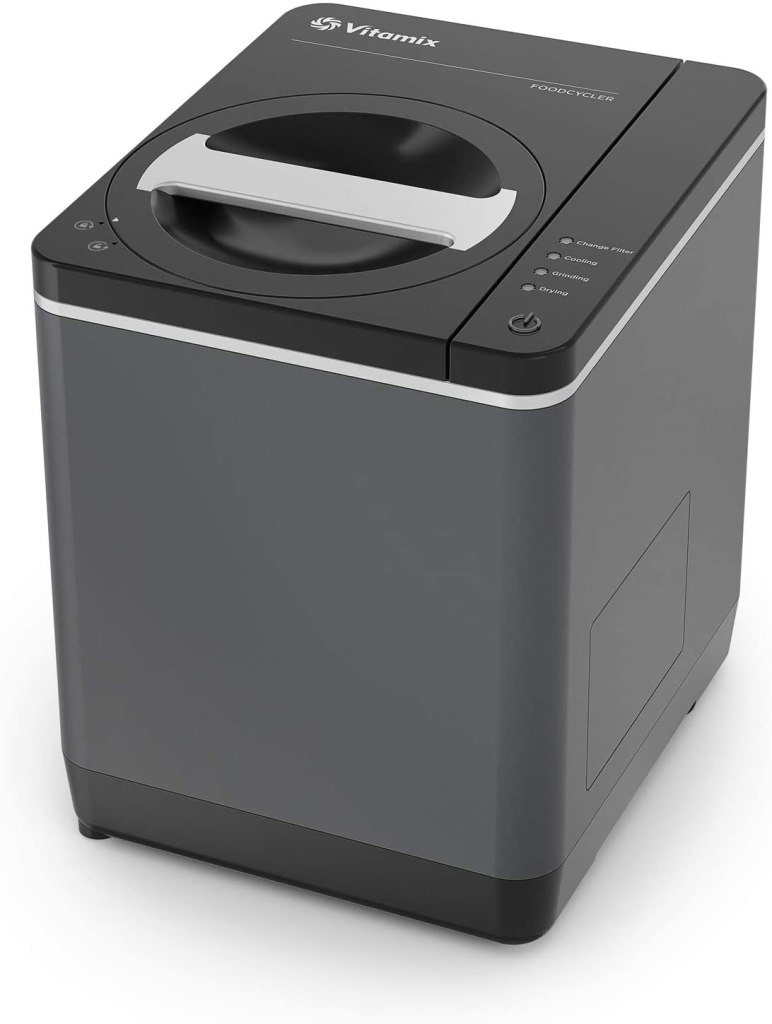 The granddaddy of all composters, Vitamix’s food recycler is a high-tech step up from just placing a bucket on your kitchen counter. This is by far the quickest and easiest way to transform food waste into fresh fertilizer, all with the touch of a button — all you need is one cubic foot of space and an outlet.

So how does it work? The recycler uses heat and breaks down food waste into a tenth of its original volume, so you can then add it to a worm bin, outdoor composter, or put it out for collection. We also love that it has a carbon filter lit to eliminate odors, so you can store more food scraps until the bucket is full (that being said, reviews say there is a bit of a cooked food smell when the recycler is actually at work, but nothing too noticeable).

The 2L capacity is great if you cook at home a lot or have a big family, and it’s particularly good at grinding down tougher scraps like chicken bones and eggshells. One cycle takes around 4-8 hours, but it runs pretty quietly, so you’ll hardly even notice that you’re helping reduce waste as you futz around the kitchen. Just throw the FoodCycler in the dishwasher to clean it out, and you’ve got one of the easiest ways to go green. 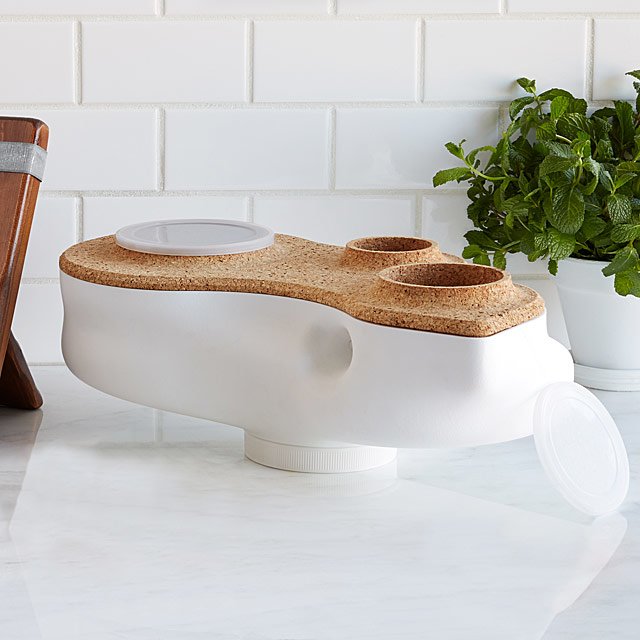 Composting with worms doesn’t have to be over-complicated with this stylish-looking biomorphic composter from Uncommon Goods.

Designed by scientists as a functional worm farm, its unique design fits in with kitchen decor better than some other offerings on the market. Just drop your food scraps in the top of the funky unit and let the worms do their thing (though, you’ll have to buy your own worms separately). The company says it’s great for fruit and vegetable peelings, grain foods, and tea bags specifically.

It can also process a whopping two pounds of food scraps per week, enough to keep up with any large household. You also won’t have to worry about it smelling up your counter-space either, since it’s pretty much odorless. If you want a composter that looks more like a piece of art, and still has all the biodegradable power of worms, look no further than this Living Composter. 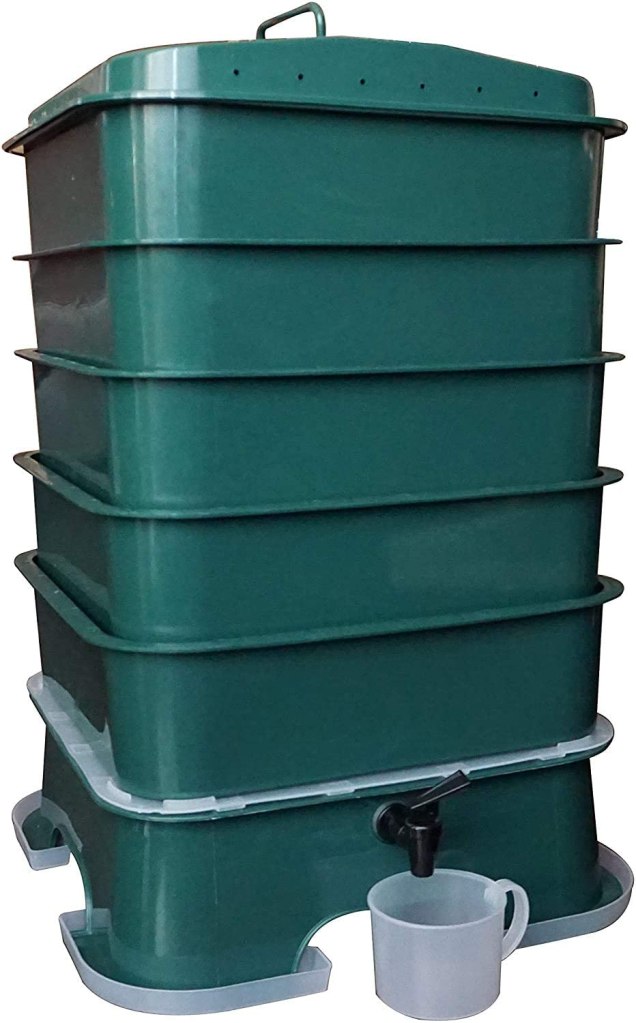 When you don’t mind handling some worms, but you want to go big with your composting efforts, there’s no better large-capacity composter than the VermiHut Plus 5-Tray Compost Bin. This composter can break down up to five pounds of food waste a day with its five tiers of trays (and you can add on even more trays if that’s not enough for you).

A special component for the worms called the “M-board” gives it better airflow to let the worms compost more efficiently. That being said, if you’re worried that more air-flow equals more smelliness, then the VermiHut Plus has you covered — coconut fibers are built into the air-vent lid to remove moisture, which means less smell and less of a chance of fruit flies ruining your composting vibes. 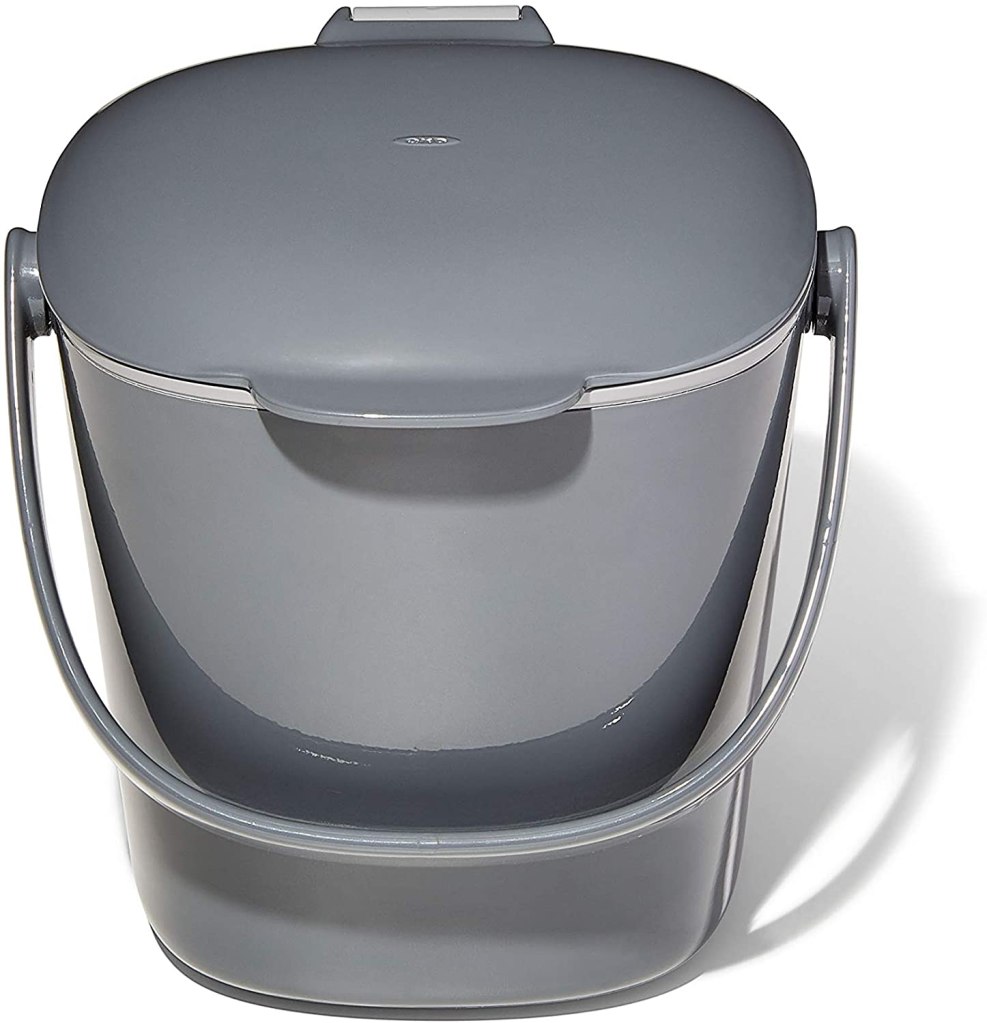 Sleek, compact, and lightweight — what more can we say about this minimalist composting bin from OXO? Even though it only holds a few days worth of food, it’s only 8 inches wide and a little over a pound when empty, you’ll get maximum portability for its price point.

Another winning aspect of this bin? The lid flips down and locks, so it also lock up odors. Simple, but still effective. While there’s no aeration in the lid, since we’re not dealing with worms here, this is less of a problem. The carrying hand also allows you to take this bucket out to your garden without fumbling around too much.

Its user-friendly, no-frills design also makes it a breeze to clean. No more digging in up to your elbows to scrub tough food scraps out. This bin’s smooth, rounded edges are easy to wipe down and disinfect.

While the capacity could be a little larger (the standard model is shy of 3L), you can’t beat the affordability and ease of OXO’s Good Grips Compost Bin.